Two weekends ago at ARG Metro Series Detroit, Jeff Jones piloted Fire Fist to a second place finish. A couple days before the event Jeff told me he was going to be using Fire Fist, and I thought he was absolutely crazy! Nekroz was something we both swore by as the best deck, but Jeff was quite adamant about this Fire Fist deck. Once I got to Michigan a few days before the event, Jeff challenged me to a game of duel monsters, where he used his Fire Fist deck and I played my Nekroz deck. The first game we played I got crushed because I opened suboptimal, and he did the Spirit combo numerous times. As the games went on I started to win, but nonetheless I was impressed with how Fire Fist looked as a competitor. Lets take a look at the deck Jeff took to this Metro Series! 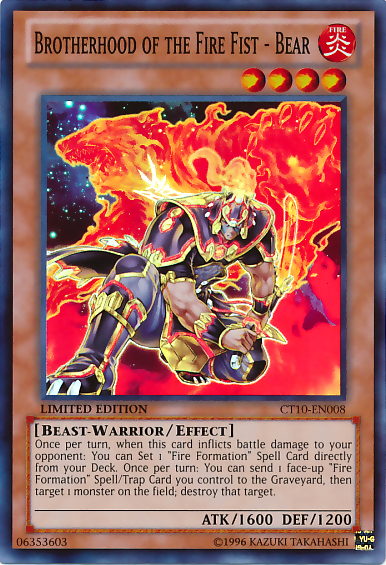 Lets look at the monster line up first. First Fist is an inherently consistent control deck, which means that it is very efficient at what it’s supposed to do. Each monster in the deck can be used to toolbox for another, which means that anytime you see a monster you’re more than likely going to be able assess whatever situation you might be in. Fire Fist- Leopard’s effect opens you open to any monster because he can search you Fire Formation-Tenki. The deck thrives on opening up with Leopard and Spirit, because then it can combo off. While rather simple, the combo nets you a lot of advantage and sets you up for your next turn. For those that may not be familiar with the combo, allow me to explain. If you’re already aware of the combo, then you may skip this section as it will probably be a review.

Step Two: Use Leopard’s effect to search a Fire Formation Tensu from your deck.

Step Four: Use your additional normal summon on Fire Fist Spirit and activate its effect to bring back Fire Fist Leopard.

Step Five: Synchro with the Leopard and Spirit into Brotherhood of the Fire Fist- Horse Prince and use Horse Prince’s effect to special summon Fire Fist-Rooster from your deck.

Step Six: When Rooster is special summoned use its effect to search your deck for another copy of Fire Fist-Spirit (Additionally you can use his other effect to send Tensu to the graveyard to set any Fire Formation spell/trap from your deck)

Ending Field and Resources in hand: Horse Prince and Fire Fist Rooster on field. Additionally you have a Fire Fist Spirit in hand to do the same play again on your next turn!

The monsters used in the above combo are what give the deck its 3rd axis, because they’re all level three, but Jeff decided to supplement these three Fire Fist monsters with some level four Fire Fist monsters to give the deck a 3.5 axis. Since Fire Formation Tensu grants you an additional normal summon each turn you not only get to perform the powerful Spirit combo every turn, but you can follow it up with a power play from the likes of Fire Fist Bear or Coach Soldier Wolfbark! Wolfbark is the Fire Fist equivalent to Satellarknight Altair, which allows the deck to access powerful rank four monsters! Fire Fist Bear is one of the best stand-alone monsters in the deck, because he can send any Fire Formation to the graveyard to destroy any monster in his way. He also nets you a free Fire Formation when he deals damage to his opponent, which is incredibly easy because he can use his effect to clear a path for himself. The last monster in Jeff’s main deck was Fire Fist Gorilla, which can destroy spells and traps as well as search for Fire Formations when he destroys a monster by battle and sends it to the graveyard. Gorilla is clearly not the best Fire Fist monster, but he can be quite useful if you’re trying to eliminate your opponent’s backrow.

The spells Jeff elected to use where fairly straightforward. The Upstart Goblins were mandatory because this deck needs to see its combo and thrives on opening up with Tenki. Book of Moon, Raigeki, and the Dark Holes were used to help assess established boards, because Fire Fist struggle dealing with multiple powerful monsters. One of my personal favorite cards in the deck, Fire Formation Gyokkou, makes it very simple for Fire Fist to combo off. For those that do not know, Gyokkou is a pseudo Night Beam that sits on the field and boosts the attack strength of all beast-warrior type monsters by 100. Since Gyokkou is searchable by multiple Fire Fist effects it gives this Fire Fist deck a terrific solution to multiple backrows. Gyokkou is especially powerful against the Burning Abyss match-up because you can lock down their discard traps or even Fire Lake! If Burning Abyss is stuck with spells and traps on the field, they won’t be able to flood the field with monsters and create huge boards. Since Fire Formation Tensu and Fire Formation Tenki are both combo cards, Jeff elected to play as many copies of them as he could to ensure his plays were successful. I saved the best spell for last, Rekindling. Rekindling is this deck’s soul charge! It allows you to special summon back all your Spirits and Leopards from the graveyard, which can be used to access the overlay network and establish a strong field presence. 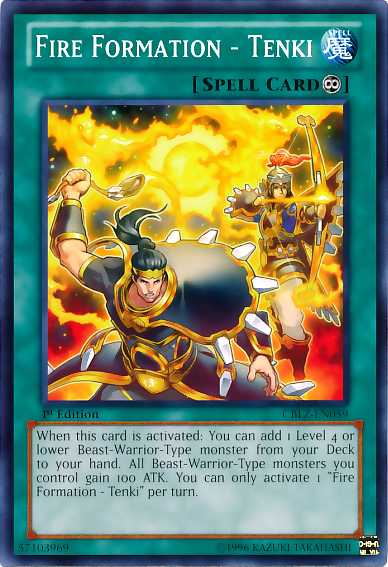 The traps Jeff elected to use were all very reactive traps. He elected to use three copies of Fiendish Chain to prevent Nekroz from ruining his day with a Trishula. Fiendish Chain covers other match-ups too, but its primary use was to prevent Nekroz from blowing Jeff out. The three Mind Crushes were also to combat Nekroz as the card got immensely better this format. Since Brionac and Preparation of Rites both saw hits on the most recent ban list, Mind Crush became more devastating. Without multiple Preparation of Rites to continuously recycle everything; a well-timed Mind Crush can win you a game! Bottomless Trap Hole works well against Qliphort and decks like Satellarknights or even Shaddolls if they happen to be without El-Shaddoll Fusion. Mirror force is my favorite trap card and in this deck because of how strong it is against Nekroz. Playing against Jeff, it was almost always gaming winning when he had Mirror Force. It’s just another one of those cards that allow Fire Fist to compete against monster heavy fields. The final two trap cards both prevent special summoning because I hear that’s pretty good right? RIGHT? Vanity’s Emptiness can single handedly win you the game against Nekroz because most players removed Mystical Space Typhoon from their main decks giving them a minimal amount of solutions to the card. Solemn Warning was primarily included to handle the ever-prevalent Denko Sekka, because its effect can lock Fire Fist out of their multiple backrow, which they need to stay in the game.

Since most of the extra deck monsters are common ones, I’ll focus on the Fire Fist exclusive ones. Jeff opted to run two copies of Fire Fist – Tiger King, because he lets you continuously access Tenki or any Fire Formation spell you might need. His negation effect is also relevant, but not as powerful as people think. Since Tiger King’s negation effect only works on monsters that are currently on the field and only lasts until the end of your opponent’s turn it isn’t too powerful. Horse Prince should be a no-brainer because it’s used in the deck’s primary combo. Fire Fist Cardinal is one of my favorite Fire Fist monsters because it looks awesome and its effect is amazing. Cardinal not only allows you to recycle your Fire First/Formation cards, but he also is a great solution to an established board. Since he can target cards in your opponent’s graveyard he can help eliminate Nekroz cards and help push through Valkyrius. The last Xyz monster I’d like to discuss is Fire Fist Lion Emperor. Lion Emperor is great because he allows you to continuously recycle your Fire Fist monsters and ensures you have plays in the latter stages of the game. The last extra deck monster I would like to go over is Vulcan the Divine. A generic level six synchro monster that recycles your Fire Formation spells or even Fiendish Chains, and effectively deals with problems on the field. Vulcan is quite the powerful resource that Fire Fist uses extremely effectively. 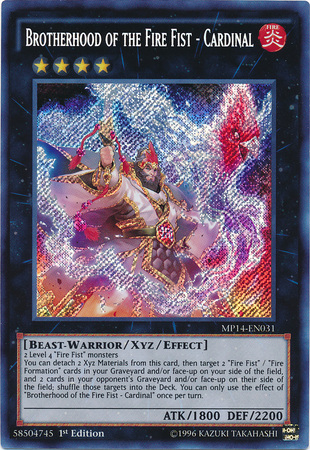 Jeff told me he 2-0d every single Nekroz player he went up against at the Metro Series and had a blast doing it! If you’ve always wanted to play 3.5 Axis Fire Fist, but were deterred because Spirit was at one for so long, you can finally play it! Fire Fist is definitely a deck I recommend if you want to play something fun and consistent.  Until next time duelists, Play Hard or Go Home!