Hey duelists! Chad here, you might not remember me, but I wrote a few articles about cardfight vanguard, well this time I'm writing about one of my favorite new archetypes in yugioh - the battlin' boxers.  The Battlin' Boxers, or Burning Knucklers as they are called in the ocg, are a new archetype that premiered in Lord of the Tachyon Galaxy, and are probably one of the most overlooked archetypes of the set. Now you might be wondering why they are so overlooked.The answer is quite simple - the majority of the archetype is common with the xyz monsters being rare, super, and ultra/ultimate. Before I go any further,  I should show you guys a fairly standard deck list... Explanation of the Cards in the Archetype

Before I go any further, I should probably explain what each of the battlin' boxers does because as I mentioned before, it's one of the most overlooked archetypes of recent sets. so without further adieu, let's start the  overview of each monser. First up, Glassjaw, he destroys himself when targeted for an attack (sort of a kamakazi if you will). This triggers his second effect which adds a battling boxer to you hand when he is sent to the graveyard by a card effect. so there are many ways to utilize this effect. Even detaching him from an xyz monster triggers the effect. Next up we have switchitter, one of my personal favorites, this guy allows you to special summon a battlin' boxer from the graveyard when he is normal summoned, which allows for a quick xyz summon. One of the ways we get to switchitter is through headgear, which sends a battlin' boxer to the graveyard when he is normal summoned and can't be destroyed by battle once per turn. Next up is counterpunch, who is the gem-merchant of the deck; meaning he increases a battlin' boxer's attack point's  during the battle phase by banishing him. From where you might be asking? well he can banish himself from the hand OR the graveyard so he can help deal massive damage. The Final effect monster is sparrer. Sparrer acts as the  kizan of the the deck allowing himself to be special summoned when there is another battlin' boxer on the field at the price of giving up your battle phase (that's why we only play two.). Next we move into the xyz monsters of the archetype.

Battlin' Boxer Xyz Monsters. Broken or Not? You Decide. 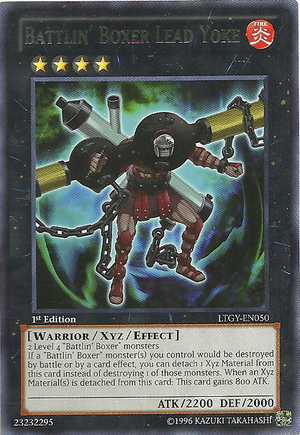 As you can see to the left, Lead yoke is pretty amazing. detaching to save a battlin' boxer and gaining attack points. this effect can be very good in certain situations such as dark hole or torrential tribute, and the attack boost is permanent. Up next, we'll take a look at Number 105: Star Cestus. 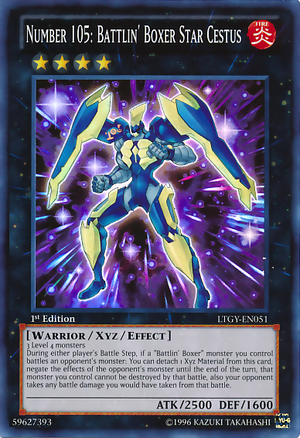 As you can see to the right, star cestus is pretty impressive right, but what about C105 Comet Cestus? Well, I don't have enough room here to show you his picture, but I can describe his effect. Comet Cestus's first effect is similar to the effect of Elemental HERO Flame Wingman (Hero players remember him right?). but what about his second effect? well, if he has Star Cestus as a material he gains an effect similar to Number 61: Volcasaurus's effect. He destrooys a monster and deals damage equal to it's attack, but he can still attack. So I'd say Comet Cestus is pretty impressive.

A majority of the deck is very standard however, there are a few cards in the main and extra that are somewhat...unusual. One of those cards is Thunder King Rai-oh. Now i know he doesn't let you search with Rota or duality, but more often then not, your gonna see him before or after those cards. The next card I would like to talk about which is gaining more and more popularity, Rank-up Magic Barian's Force. this card allows you to rank up Utopia or Number 105 into Number 39: utopia Ray V or Number C105: Comet Cests. Most people don't consider using this card because it is a waste of space, but I personally like it and know other people who do as well, and Number C105 is actually really good.. Those are basically the only unusual cards in the main deck, any others are self-explanatory. Next we have the extra deck. More than half the extra deck is fairly standard, there's only about two cards that you wouldn't typically find in this deck, which is Utopia Ray V and Paladynamo. Number C39: Utopia Ray Victory is in here as an extra target for Barian's Force because you aren't always gonna have Number 105: Star Cestus on the field when you draw rank-up magic. Starliege Paladynamo is in the deck because there will be times when you have a dead thunder king and a dead photon thrasher on your field.

The play style of the battlin' boxers seems to be very aggressive, but at the same time very combo oriented. At the same time, it seems to be based on getting to the bigger monsters quicker while gaining hand and field advantage using the graveyard as sort of a stepping stone. The play style of the battlin' boxers somewhat reminds me of the play style of the great nature clan in vanguard,  powering each other up and gaining hand advantage. One main weakness of the deck that I would like to point out would be the fact that many other decks can out speed it such as dragon rulers and prophecy, which is one of the reasons why Thunder King Rai-Oh is in the deck. Another key weakness is hat hey can easily be countered by cards like compulsory evacuation device, necrovalley and other monster effects, spells, and tras, which is why there is so much back row hate and monster removal in the deck.

Later this year, when we get shadow specters, support has already been announced for the battlin' boxers in that set. So far we know of four cards to be in the set as support, one xyz monster, two effect monsters and a spell. I don't want to spoil the new support so be on the look out for my next article, which will probably be a follow-up to this one...

Battlin' Boxers are such a fun archetype and yet they are so competitive. I recently learned that there were three battling boxer decks at the Poland national tournament. As much as I would like to know the deck lists, I highly doubt  they topped, but still I'm glad to hear that at the very least that people tried to use them at such a high level of play. I can't wait to see where they go when the new support comes out. Until next time duelists, play hard or go home!

Deck Doctor #12: Thunder Family and DinoFist
Thinking outside the box: A deck building perspective
Our Contributors