At long last Season Three of the well-known ARG Circuit Series is finally here! The ARG Circuit Series goes hand in hand with the brand new ARG Format, which has been in place since this past July. ARG Format has seen many shifts in cards that have allowed players to use decks that would have otherwise been obsolete. The latest update to this new format came this past Labor Day, where we saw the following changes take place:

Restricted to 1
Nekroz of Unicore
Trishula, Dragon of the Ice Barrier

*If you would like to see why some of these changes were made, here’s the link to the original ARG article with the new changes: http://articles.alterealitygames.com/arg-format-bannedrestricted-list-update/

“Wait, you’re not going to tell us why they made some of these decisions?”

Instead of spending multiple paragraphs going over something that won’t really help you, I figured I would make a list of some of the decks I feel will be strong contenders in this new format. Some of these changes allow duelists, young and old, to prepare all sorts of new decks and take the upcoming ARGCS Indy by storm!

Shaddolls were given quite the boost with these new changes as Raigeki getting banned gives players one less card to out an established Shaddoll field. One of the biggest issues that Shaddoll had was losing their entire field to a Dark Hole or Raigeki because they put so many resources into making it. That was my biggest frustration when playing Shaddoll; I would work so hard to establish a board of monsters only to have my opponent decimate everything with a Raigeki or Dark Hole.

More importantly, Shaddoll was given a second copy of El Shaddoll Fusion. El Fusion allows Shaddolls to play more reactively and grind through their opponent’s backrow, which will be very prevalent in this format, as it appears to be much slower. Having access to El Shaddoll Fusion also allows Shaddoll to finish their opponent’s off very quickly because it allows them to push for damage and then fusion again and push for even more damage! Despite Nekroz being hit, the deck will probably still be played in this new ARG format. Knowing this, El Shaddoll also allows Shaddoll to play through Valkyrus effortlessly.

With Moralltach going to three, Artifact Shaddoll variants have become viable yet again. Moralltach is a newfound solution to monsters that have been given Shaddoll issues like Nekroz of Unicore, Nekroz of Clausolas, and Masked Hero Darklaw. Moralltach is especially strong in Shaddoll if you combine him with Call of the Haunted to reuse him if you happen to fusion with him into a Construct. Call of the Haunted also allows you to revive Construct and trigger its effect because Construct can use its effect anytime it is special summoned (Call also plays around Shaddoll Fusion, because the Fusion monsters that come back would not be from the Extra Deck).

Burning Abyss wasn’t really handed anything from this list outside of Allure of Darkness, but even then not many players used Allure in the deck anyways. With Raigeki finally getting re-banned it won’t as easy for decks to make an Abyss Dweller and then drop a Raigeki to completely ruin a Burning Abyss player. Since Qliphort Towers is banned, Burning Abyss no longer have to consider playing a suboptimal card to deal with Towers, which is another reason why Burning Abyss looks to remain on top of the ARG format.

Compulsory Evacuation Device going to two might seem like a blow to Burning Abyss, but it is hardly an issue. Most Burning Abyss players put Downerd Magician over their Dantes anyways, which makes Compulse a minus one. It’s also important to note that most Dante’s are formed by one special summoned Malebranche monster and one normal summoned one, which means that the Compulse will be a minus one in that scenario too (The normal summoned Malebranche will still trigger).

Burning Abyss, while undeniably one of the best decks in this format, is going to struggle against the newly boosted Infernoid deck. With only one Cir in this format, it isn’t very difficult for an Infernoid player to tribute off one of their monsters and banish the Cir from the game. Without Cir Burning Abyss struggles to grind with faster decks, and as a result will lose to them. If I was to use Burning Abyss in this format, I would definitely be side decking Imperial Iron Wall to prevent losing to Infernoid. Even though you would have to side out your Farfa(s), the return would be much bigger as Infernoid cannot play with an Iron Wall on the field.

While I’m not the biggest fan of this deck, I do think it is going to be a very strong contender in the new ARG format because of the addition of a second Monster Gate. With the second Monster Gate, Infernoid now has 5 cards (3 Reasoning and 2 Monster Gate) that allow them to mill a large amount of cards to set up their graveyard. Since Burning Abyss is still going to be a popular deck, Infernoid will shine because it can overwhelm BA with cards like Devyaty who decimate the deck’s backrow. As I previously stated, Infernoid can ruin a Burning Abyss player’s graveyard with their monsters. However, Burning Abyss isn’t the only deck that needs a graveyard to win games.

Nekroz is very reliant on having a graveyard full of ritual spells to gain free advantage, which means that Infernoid can deplete this advantage with their monster’s D.D. Crow effect. The less mirrors a Nekroz player has, the fewer options they will have on their turn. 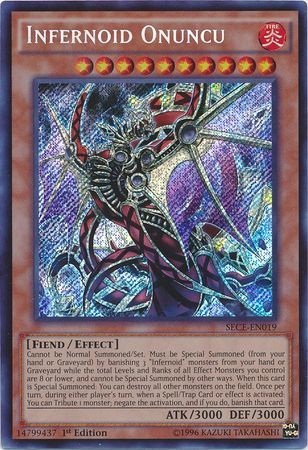 Kozmo was already quite the powerful deck in ARG Format, as demonstrated by Jeff Jones, Alex Vansant, and myself at the Metro Series in Medina. Not to mention Taylor Wallace’s stellar performance at the 25k with his spicy hot Instant Fusion tech in to the deck!

Kozmo didn’t really lose anything from these recent changes, and it gained some steam with Moralltach going back to three. One of the biggest issues for the Kozmo deck was dealing with El Shaddoll Construct because the bigger Kozmo monsters would just die to it, and the only real out was through Kozmo Goodwitch. Outside of Goodwitch, the deck could use Honest to help Farmgirl get over the Construct, but for the most part it was a huge problem. With the incorporation of Moralltach, the deck can now use Sanctum to out not only Construct, but also just about any issue that the deck is presented with. Obviously Moralltach’s use can be seen present in the dichotomy of deck’s that this format has available, but I think Moralltach will really shine in Kozmo. Kozmo Sliprider is a level 5 light monster, which means that in combination with Moralltach, Kozmo can access Constellar Pleiades.

Satellarknight has eluded any real damage from any of the ARG ban lists, which means it will remain the same consistently average deck for the format. With Shaddolls now having access to multiple El Shaddoll Fusions, Satellarknights could potentially run into issues with Winda yet again, but overall the deck should remain solid and be taking at least 2 spots of every top 16.

Evilswarm regained some more steam with Rescue Rabbit returning to three, which means that people can once again enjoy the frustrations of Ophion with three to four backrows behind him. While the deck has been outclassed by a majority of the new decks, I still expect to see a decent amount of players re-visiting this old strategy.

Heroes gained a second Bubbleman from this list, which allows them to otk much easier with Blade Armor Ninja and Excalibur. Aside from the second Bubbleman, Heroes should be stronger if they splash Moralltach into the deck. Setting up a field with Masked Hero Dark Law, and then setting a Sanctum seems incredibly powerful because you will not only destroy a monster, but you’ll be able to banish it! Heroes look to be one of the leading dark horses for ARG Indy, and I must say I’ve been entertaining the idea of using them ever since I saw the changes that the Labor Day list brought us. 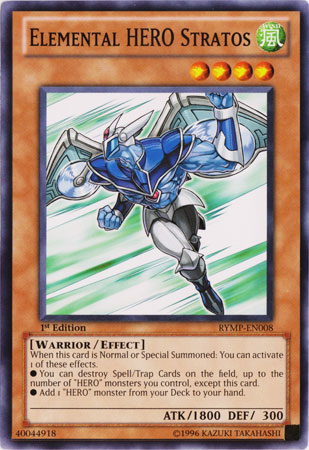 ARG Indy is only a week away, have you been play testing the new format extensively and found the answer to the question everyone wants to know going into Indy, “What deck will be the best?” As I’m still searching for the perfect deck, I have a long week ahead of me! Until next time duelists, Play Hard or Go Home!

Cardfight!! Vanguard G: What is winning in the Bushiroad Fall 2015 Qualifiers?
The Value of Siding Extra Deck Cards
Our Contributors