Hello Duelists! After looking at the results of the past couple ARGCS' and YCS London I found something pretty interesting. At least one Satellarknight deck has made it to the top cut of each one of those events. Unfortunately at the ARGCS that the Satellarknights made the top cut of, both of them were eliminated in the top 16. So I started looking into the deck and one of my friends Danny Polito had a pretty interesting take on the deck, which was that he was using Artifacts in it. Initially I didn't think much of it but after playing against it and watching him play with success, I realized that there was something to the deck.

Here is an example decklist:

More bricky is the problem 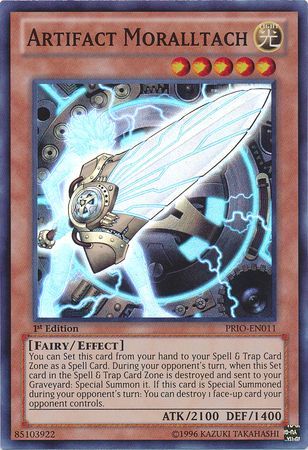 The main problem with the original build of Satellarknights was that the deck had effectively one ideal opening: Deneb and four or five trap cards.  While the deck was optimized to open like this, drawing perfectly still didn’t happen that often and you would rarely only have one monster in your hand.  The strategy would be to reduce your opponent’s life points to zero before they ran through all of your trap cards.  In formats dominated by extremely powerful combo decks where all of the monsters are floaters, this tended to be a losing strategy. The addition of the Artifact engine allows you to put your opponent on a much shorter clock.  Sanctum is an incredibly powerful card – not only does it allow you to interrupt your opponent’s plays, but it also puts a fairly big monster on board.  Combos like Ignition + Beagalltach are even scarier, as they give you access to powerful cards like Pleiades and Volcasaurus.

The main problem with the Artifact engine is that the Artifact monsters are basically blanks if you don’t draw Sanctum, Ignition, or MST. Thankfully you run a large number of those cards, and Satellarknights still have plays even without the Artifact engine, so you’ll usually be able to survive long enough to make them useful.
I'm fairly certain that the pro's of using the Artifact cards heavily outweighs the cons of drawing an Artifact monster without being able to get to Artifact Sanctum or Ignition. I also believe this because plenty of players will "blindly" destroy your backrow with cards like Night Beam and even Mystical Space Typhoon only to be punished because they destroy an Artifact monster such as Moraltach or any other Artifact card for that matter because they weren't expecting you to be using Artifacts.
Stellarknight Triverr 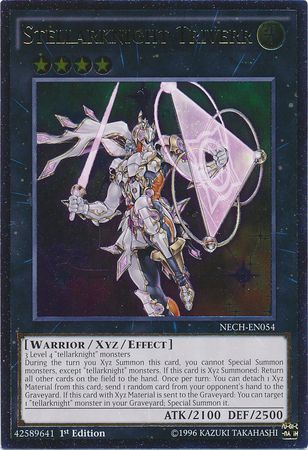 This card is one of the main reasons why I even decided to look at this deck. I've seen a lot of lists using just one Triverr but I would definitely use two, as he is fairly easy to make even in the Artifact build, and you will often find yourself recycling your first Triverr by summoning your second one. Looping Call of the Haunted and Altair using Triverrs effect creates an insane amount of advantage very fast (Since if you overlay using a monster that was brought back by Call of the Haunted, Call will remain faceup).

Being able to reuse your own power cards is pretty neat, but where Triverr really shines is in his ability to clear previously unmanageable boards. Triverr’s effect helps you to get around problem cards without triggering their effects that you struggled with before such as Dante, Traveler of the Burning Abyss and El Shaddoll Construct. Before Triverr, Stellars didn't really have a way to get rid of multiple Dantes or multiple El Shaddoll Constructs without triggering their secondary effect (using Evilswarm Exciton Knight). Triverr also gets Leo, Keeper of the Sacred Tree off the field, no longer requiring you to go into the relatively mediocre Excalibur.

Triverr’s discarding effect doesn’t require much discussion; picking cards out of your opponent’s hand has always been a very strong effect.  Additionally, the fact that Triverr will float a Satellarknight from your graveyard is a nice improvement over Delteros, which required you to pull one from your hand or deck.

The fact that this deck mains 3 Ignition, 2 MST, 3 Sanctum, and 3 Nova makes it one of the few decks that can succeed with the game-plan of “stop the Scout”.  Going first against Qliphorts with this deck is nearly auto-win.  Going second isn’t too much of a problem, either.  While Skill Drain would normally shut you down cold, you still have five immediate answers to it, and the chances of opening at least one when going second is around 58%(not counting Duality).  Another advantage relegated by the Artifact engine to this matchup is the increased number of ways with which you can get over Saqlifice.  Normally Castel would be your best answer, but Sanctum provides a 1-card answer that doesn’t cut off your battle phase like Altair sometimes does.  Triverr also solves the problem temporarily, but unless you get lucky with the discard effect, your problems aren’t going away.

Post-siding, this deck has even less trouble.  The only card that Qliphorts side with any regularity that might have an impact on you is Flying “C”.  Unlike its applications against Burning Abyss, however, Flying “C” is usually going to be dead turn 1 for your opponent – and if you have Vega, you can very easily play around it just by summoning Deneb or Unukulhai by itself.  Later in the game, your opponent will likely have a scale up, making it entirely unusable (and if they don’t have a Scout active mid-game, you’re probably winning even if they manage to drop a Flying “C” on you).

The main problem early builds of Satellarknights had with the Shaddoll matchup was that Shaddolls boasted larger standalone monsters than Satellarknights (primarily Squamata and Dragon).  These monsters would require Satellarknights to go into their extra deck to get rid of them, making Shaddoll Fusion a huge threat.  Winda also shut the deck down pretty heavily but Call of the Haunted helps this problem.  Sanctum solves this problem by letting you change the pace of the duel – now you can sit on a Moralltach, and force your opponent to consolidate their resources into a fusion monster to get over it.  Then you have the opportunity to either stop the fusion play entirely, with Nova, Vanity, or Warning, or get rid of the fusion monster with Castel or Triverr, denying your opponent the ability to recycle their fusion spell.

Post-siding, you can just bring in any number of floodgates and sit on Cairngorgon to make life very difficult for your opponent.  Non-Fusion Area deserves some consideration here over more traditional picks because setting up Cairnagorn + Non Fusion Area is usually game ending.

The BA matchup is where things get iffy

The Burning Abyss matchup is the main reason why I’d still be a little leery of taking this deck to a major event.  Going second against Burning Abyss with the Artifact version of the deck is very much a losing proposition if your opponent manages to resolve Virgils effect on your Deneb or destroys your backrow with Fire Lake during the End Phase, despite your increased ability to snipe Fire Lake.  Artifacts, at their heart, are a very reactive engine, and they don’t do much when you’re staring down double Dante or Dante and Virgil.  The other version of the deck which is currently seeing play has a slightly better time, as it runs up to six copies of Call of the Haunted (by using Oasis of Dragon Souls), which gives it more follow-up plays and makes it easier to access Triverr.  However, this deck will do better going first against Burning Abyss, since having Sanctum when your opponent summons Tour Guide effectively ends their turn (and, often, the duel).

I think this deck has a lot of potential and it's unfortunate I only noticed it now. If you guys decide to try out this version of the deck, which version of the Satellarknight deck do you like better and why? That's all for this week's article! If you'd like to see me write about a certain topic feel free to message me on Facebook. The Circuit Series stops by Orlando, Florida next, I hope to see you all there!

ARGCS Atlanta Tournament Report
The Game Outside The Game
Our Contributors