Greetings cardfighters and welcome to my third article. This week I'm going to take a little break from my "Exploring G-BT02" series to instead talk about game play. Finals have been taking a toll on me this week, and I don't have several hours to research and forge decks unfortunately. I do however hope this article can improve and refine some of your game play tactics, if that is something you are currently struggling with. Every guard counts, and that one 5000 shield unit you acquire through better playing might clutch you a few games!

Cardfight Vanguard is overall not a difficult game. The mechanics are quite structured and streamlined in comparison to other TCGs. That said, countless times I've seen many novice or average players (even experienced players do it too, I'm no exception) do blatant misplays or simple mathematical errors and I've thought to myself "wow, why did you do that?" There are various reasons to this such as a lack of foresight, not accounting for triggers seen and probability, or not seeing the difference between a passive or aggressive play. After some thought, I discovered the overlying reason for most misplays is the "tunnel vision" mindset. For those who have not heard the term, when a person "tunnel visions", that person is only looking at the game with one view and limits him or herself to a particular routine. In other words, a tunnel visioner goes for the easy way out and doesn't think outside the box.

I'm not quite following you. Can I see an example?

Consider the following scenario. Player A is playing against Player B, who is playing a Liberator deck. Player A is going second, and opens up with two Grade 1 units with 7000 power. Player A tends to tunnel vision and automatically thinks "oh, I have two grade 1s. I was going to call these anyway, why not just play them now and attack!" He plays both his Grade 1s and swings straight into the Liberator player, who happily takes the two damage. The Liberator player proceeds to call Oath Liberator, Aglovale to rear-guard on the next turn. Using its ability, he hits a second copy of Oath Liberator, Aglovale, which is also live due to Player A giving him two damage. With the second Aglovale, he superior calls Fast Chase Liberator, Josephus, and draws an additional card. Player B was able to go +3 in this scenario, have a nearly full field, and swing for 2-3 damage on his second turn, all because Player A called that additional Grade 1 against the wrong match-up. 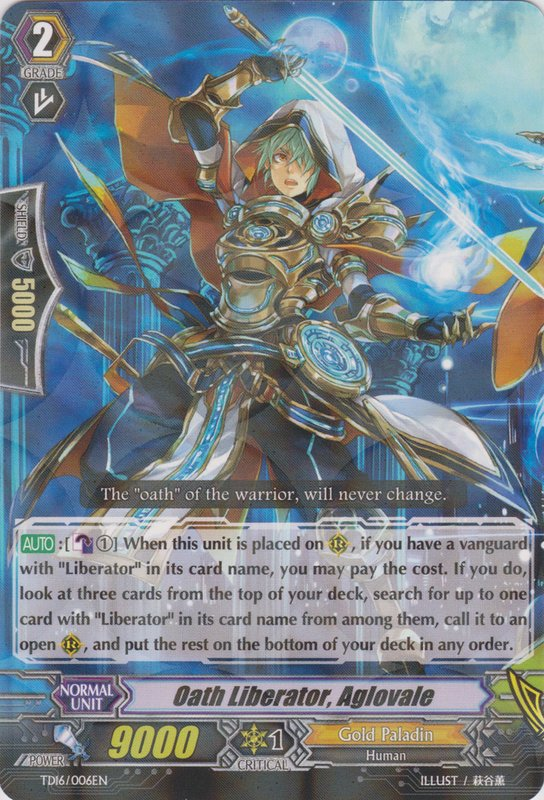 It is worth noting that there is a difference between early game tunnel visioning as opposed to the late game. For Vanguard, the early game tunnel visioning occurs when one does not understand how different decks work in the early game. Some decks make usage of fast skills, such as the Liberator deck mentioned above or something like Perdition Dragons, yet other decks such as Gear Chronicle play the vanilla game until turn 3 or 4. One cannot apply a ride, call what you can, attack mindset against the Liberator player because you have the risk of being out advantaged early in the game, which is huge in Vanguard. Against the Gear Chronicle user however, you are encouraged to do so because rushing them down is a weakness of the deck. It is acceptable therefore, to create a set of "do's and don'ts", against certain decks regarding the early game, as the scenario you are put in turn 1 should be relatively similar most games.

Player A is running Thing Saver/Altmile Royal Paladins and Player B is running Revenger Abyss Shadow Paladins. Player B is sitting at four damage. He calls his entire hand, uses Revenger, Phantom Blaster "Abyss"' legion skill, and attacks Player A. Player B doesn't drive check into a perfect guard after two swings, but he got a couple critical triggers, a grade 3, and a grade 2 from his drive checks, which now makes up his hand. Player A manages to survive and he draws into Seeker, Thing Saver Dragon! Player A decides he should just ride Thing Saver since that's what he always does in the latter stages of the game to win. Player A performs legion, and swings twice with Thing Saver. Player B took the first hit, was not critted, and went to 5 damage. However, he did damage check a trigger so Phantom Blaster "Abyss" is sitting at 16000 power. Player B guards the second swing, as well as the one column Player A had. Player B goes and top decks into another Revenger, Phantom Blaster "Abyss", thereby taking the game.

What went wrong here? Player A just got unlucky and didn't get a critical, while Player B was really fortunate by damage checking a trigger AND top decked into another Phantom Blaster "Abyss". Just typical Vanguard luck right? The problem is Player A did not realize that he was currently sitting at Generation Break 1. The correct play would have been to stride into Holy Dragon, Saint Blow Dragon and swing for game with the guaranteed critical. If Player A had been paying attention, he would have known there was no way Player B would have a Perfect Guard in his hand. Saint Blow Dragon was sure to hit with its gargantuan power due to his opponent only having 25000 worth of shield to guard with in his hand, while Player A's rear-guard could have taken out the intercept prior. Player B only would have survived with a 6th damage heal trigger. Instead, Player A "tunnel visioned" by riding Thing Saver since that's what he usually does and he lost the game. While his opponent was lucky to win, Player A had the chance to PLAY AROUND that luck by making a more optimal yet less common play given the circumstances. This my friends, is breaking the tunnel vision. 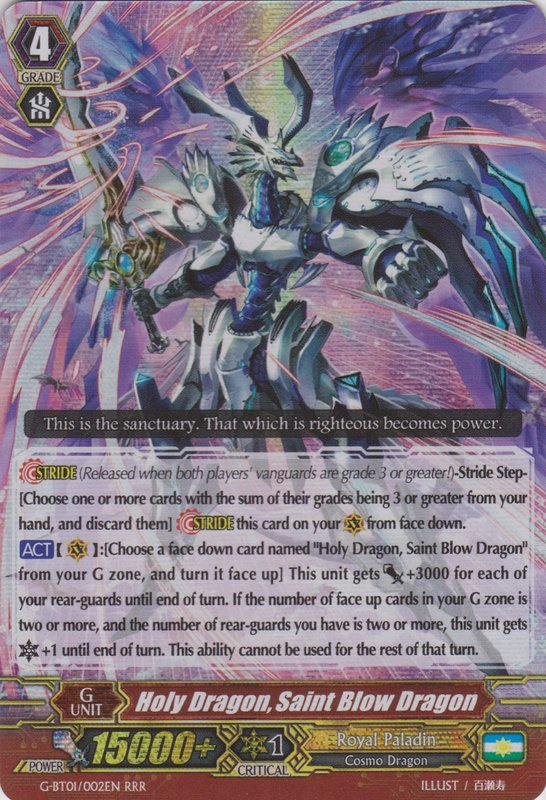 Late game tunnel visioning is usually a per-scenario situation, but it ultimately comes down to memorization and game mechanics. It's commonplace for a game to go on for quite a while and for people to forget what happened a turn or two ago, even regarding free information such as the drive check. Say your opponent scored two critical triggers on you last turn. It is very improbable that the same scenario will happen again on the following turn (assuming we're not talking about deck manipulation via legion), so you can factor that into how you will guard for the next turn. Someone who forgot what happened the turn before won't see that, and may potentially spend more resources than needed.

Shoot, I am having this problem. What are some tips to fix this?

Ultimately, fixing a "tunnel vision" mindset takes a bit of time and experience. Paying attention and memory skills are key. Understanding different decks, their match-up with your deck, and whether they prefer aggression or control are key points to remember. Here are some additional tips to try out to help.

-Play test with a multitude of different clans. It is amazing how different things seem when playing with a different set of lens. By using your friends' decks, you can more easily see what these decks lose to, something that is not always as apparent when only playing against them. Once you get a feel for another clan's strengths and weaknesses, you can exploit that to your advantage the next time you play against it. You can also pay attention to how other people pilot your deck, and you might (and probably will) catch them playing it differently.

-Pay attention to your opponent's field and hand. I'm actually serious about saying this because I've seen many players just focus on their board and plays while paying little to no attention to what the opponent is doing.

-Try to practice games remembering all of your opponent's drive checks. They essentially are free information and MANY players do not do this. Information like this can save you a game such as the Thing Saver scenario, or might allow/disallow you to make an aggressive play knowing what your opponent has in hand. *Example: if you saw your opponent drive check a Blaster Dark Revenger "Abyss", think twice before calling Commander Laurel*

-Play open handed against experienced opponents. One of the best ways to refine your play is to be actively coached by your opponent. You play as if you don't know each other's hand, but the mentor actively explains his plays and thought process while guiding you with yours. It's quite effective and pros in other TCGs do utilize this method

-Have someone silently video tape you from behind. You can watch and critique your decisions among a group of friends after a few games, stop the video sometimes, and point out things done correctly or incorrectly. If game mechanics is your flaw, this is perhaps the best method, as sometimes watching yourself on tape put triggers on a one-stage column instead of a two-stage one might look more silly than it is while performing it! *yes I see people do this*

-EFFORT! It sounds silly to say, but you have to actually want to break your"tunnel vision" habits. Just like anything else, you won't magically become good overnight. Complaining about losing locals every week and not taking any effort to better yourself as a player will not get you anywhere, besides sacking a few wins here and there.

These are just a few tips for combating the "tunnel vision". Once again, the ultimate way is to take the time and effort to get more experienced, and fine-tuning your memory skills to learn how certain decks play as well  as remembering drive checks. Now go practice and Play Hard or Go Home!

The Scoop: Countdown to the 150th
Maximizing Value – Mind Crush
Our Contributors