Greetings cardfighters! Last time I reviewed Chronodragon Nextage and Soaring Divine Knight, Altmile, if you missed it you can check it out HERE. Anyways, I want to spend this week reviewing more cards so let's dive right into it! 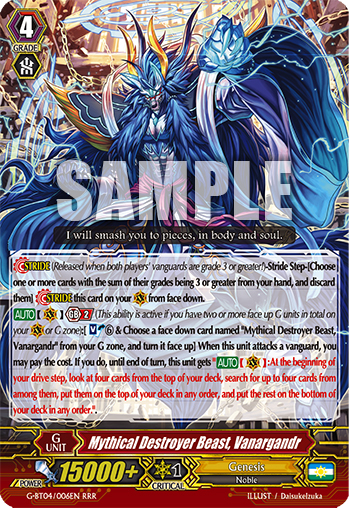 I know Genesis isn't the most prevalent clan in the game right now and I'm definitely no expert on the clan so my analysis will be of a generic tone, but Vanargandr is in my opinion the most interesting card of this set by card design. Back in the beginning days of Vanguard, Oracle Think Tank's Goddess of the Full Moon, Tsukuyomi was infamous for its late game stack of triggers and I thought that was one of the neatest mechanics they did back then. Vanargandr takes that stacking ability, accelerates it, and combines it with a common Magic the Gathering mechanic known as scry. In this game, scry is especially powerful because re-arranging your deck to ensure critical and heal triggers sounds pretty powerful to me. Now it does seem far easier to pull off in the Mythic Beast, Fenrir deck, which has a lot of individual cards that soulcharge for you, whereas Regalias don't have quite as much raw soulcharging power to accomodate its expensive SB6 cost when you want to save it for Cosmic Regalia, CEO Yggdrasil. However though, the clan is blessed with a very strong first stride unit known as Great Angel, Doom Brace, whom has has solidified itself as the go-to stride for all Genesis decks since it refunds its cost. If anything, Vanargandr can be used to keep the soul small enough to allow Doom Brace.dek to continue doing what it does.

As cool and as fun as Vanargandr looks, I still doubt it's good enough to propel Fenrir to the top tiers. The reasoning is the clan's mechanic is what holds them back. While sure there are cards that do things when soulblasted and have some minor changes regarding the board state, it is still very static and does not directly generate massive plusses for you or massive negatives for the opponent, at least in comparison to other clans. Maybe I'll be wrong and stacking three triggers and soulblasting a ton of cards to power up all the GB1 rearguards in this set may be really strong, but I'm skeptical at this point that it will be anything more than a fun deck. And of course, Fenrir is another stride break deck, and we've covered how those decks are all really slow in comparison to faster, older cards. 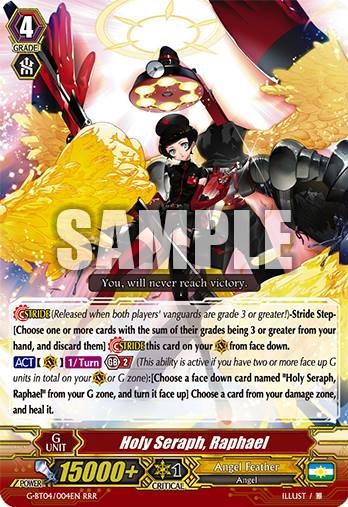 My first reaction to this card was, wow a free heal that's insane! But then I remembered its clan and it didn't seem as insane as it sounds. But then I saw some of the other combo cards Angels got in this set and it suddenly became insane again. Raphael is a very solid card that essentially keeps you in the game for no cost. For the longest time, Angel Feathers wanted a card that actually let them heal and do something you'd imagine a damage zone based clan would do and they got it. Also the card in theory allows you to grind the game long enough for you to unleash the deck's win condition, which is ironically a single R. 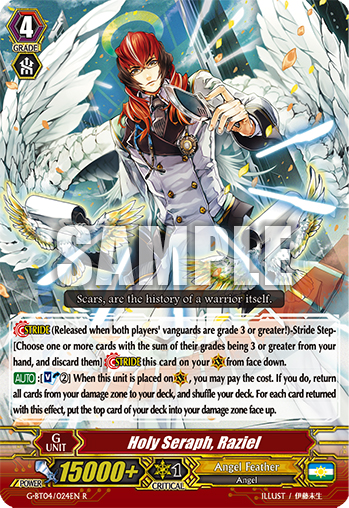 I'm honestly surprised Raziel isn't the RRR, despite not being a persona stride. It has hilarious synergy with Nurse of Broken Heart, Thousand Ray Pegasus and Million Ray Pegasus, while also allowing you to sculpt your damage zone full of triggers and returning them to the deck. It essentially gives the deck the offensive pressure it sorely lacked, while still having good synergy with Black Shiver, Gabriel. The beauty of it is the deck has the versatility to play offense or defense. Do you want to play offensive and have already toolboxed into your Pegasi set up? Use Raziel. Do you need to tank and solidify your position? Heal your damage with Raphael. You can expect to resolve this card twice per game since there are a few other cards you can use to go into the soul. Angel Feathers are looking really cool right now. However like many other clans, this strategy seems to fall apart against field control decks like Kagero and Narukami, since you must use Raziel's skill on-stride. Whether the clan is also consistent enough in general to be competitive is another question, but it is still looking to be a very fun deck to play at the very least, if not semi-competitive. 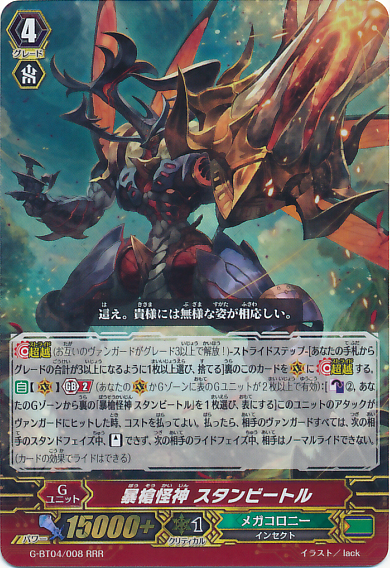 [AUTO](VC) Generation Break 2 (This ability is active if you have two or more face up G units in total on your (VC) or G zone):[Counter Blast (2) & Choose a face down card named "Raging Spear Mutant Deity, Stun Beetle" from your G zone, and turn it face up] When this unit's attack hits a vanguard, you may pay the cost. If you do, all of your opponent's vanguards cannot [Stand] during your opponent's next stand phase, and during your opponent's next ride phase, your opponent cannot normal ride. (He or she may ride with an effect of cards)

Unlike the other two cards, I look at Stun Beetle and I'm fairly disappointed. A persona stride that must hit to accomplish anything doesn't sound very good to me. Sure people can argue that Saint Blow Dragon and Ragnaclock Dragon fall under this Perfect Guard or die category and they're right, but I would argue they are not exceptional cards either. The largest issue with Stun Beetle isn't only that it is an on-hit persona stride, it is also outclassed by its Machining counterpart, Carapace Mutant Deity, Machining Destroyer. Why would you want to rely on an on-hit stride to stun the vanguard when you can keep spamming Destroyer to accomplish it? Sure if it hits your opponent literally cannot do anything or re-ride, but if they have the perfect guard (which by that point of the game they should, and it is the same scenario as Saint Blow or Ragnaclock, perfect guard or lose), you get no value off it besides stunning a few rear-guards off other units' skills, which is pretty mediocre.

The Intimidating Mutant, Darkface stride deck also has no finishing power. What Machining Destroyer does is force the re-ride every single turn and if they can't, you basically instantly win. Even if they do re-ride, they're not likely to have the stride fodder to go along with it as well, so you really just need it to resolve once and it is a far more consistent plan. Darkface just stuns rear-guards that can be replaced or be sacrificed for Shadow Paladin skills, and has a vanguard that is not allowed to be hit. It's nothing very impressive, certainly nothing that Machinings cannot do better.

And that wraps up my review for this week. Feel free to let me know in the comments if you agree or disagree with my analysis and why. As always, Play Hard or Go Home!