Greetings cardfighters! Soul Strike Against the Supreme is right around the corner so I wanted to get a few more card reviews in before the set launches! Without further adieu, let's dive into it! 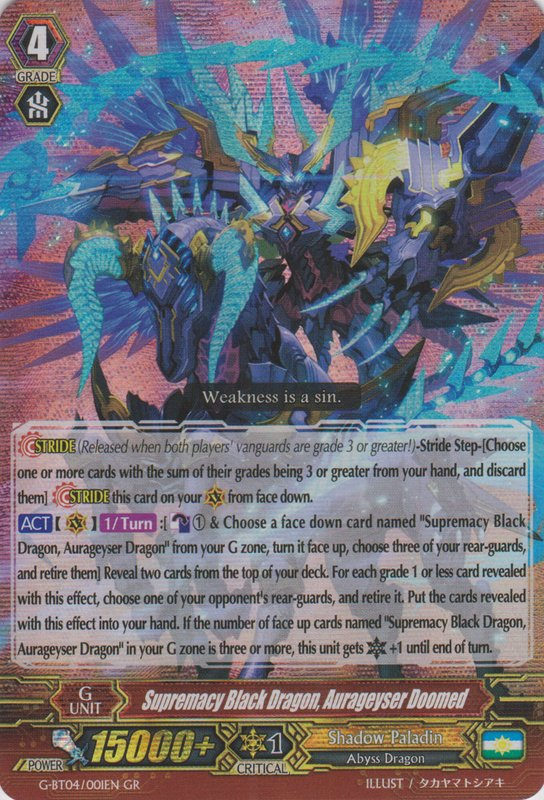 A lot of people were rather disappointed when Bushiroad first announced this card because it seemed like a clone of the original Aurageyser Dragon, with an additional gimmick attached to it in exchange for a larger cost. On first glance and perhaps even taking a second one, that is true. With Dark Dragon, Phantom Blaster "Diablo" already taking 4 slots in the Shadow Paladin G Zone, is there even space to fit Doomed? Is the card even worth playing when Aurageyser Dragon has a lower cost? Now this card definitely is not the greatest card ever (not that Shadow Paladins really needed more amazing cards) but there are a lot of overlooked aspects about it. My argument is this card has a lot of versatility and can easily fit one slot, assuming your build is already running enough Pitch Black Sage, Charons. Here's how I got to my conclusion.

First and most importantly let's discuss the pros of this card over the original Aurageyser Dragon. One small but noticeable difference is that Doomed does not cost 1 Soulblast. This actually matters in the Revenger deck, since the soul is often used for Black-winged Swordbreaker and Dark Heart Trumpeter. Saving that one soul could potentially let you resolve another copy of one those cards, since you usually get two or three soul per game. Let's say on average, one of the two cards you get off Doomed's skill will be Grade 1 or lower, so you'll get at least one retire unless you are unlucky, which would be a one-for-one exchange. The choice to stride into Doomed vs. Dragon on first stride would depend on if the opponent has a certain rear-guard that needs to be retired, such as Commander Laurel for example.

Of course, a very important point to note is that Doomed has an ACT skill, not an AUTO one. This means that this card activates in the main phase, so unlike Aurageyser Dragon, you cannot retire rested units when attacking. This sounds worse and it is in most situations, but it's also better in others and both cards mirror each other in that regard. If you have nothing but triggers, Charon, and/or Black-winged Swordbreakers, it's quite good to sacrifice them for the skill and draw two cards that can potentially be more useful for your battle phase. Playing Aurageyser Doomed gives you the choice on which option you want to go, and I think that's pretty cool.

This in turn boils down to deciding if it is worth cutting Dark Knight, Grim Recruiter. I definitely understand that Grim Recruiter can be awesome in some situations, calling something like Dark Heart Trumpeter into the 10k attacking Transient Revenger, Masquerade is a strong +2 into an additional two-stage column that can attack. My argument however is that Aurageyser Dragon is often the best go-to first stride anyway due to cards like Dark Night Maiden, Macha existing and the sheer amount of set up it consistently provides you. Grim Recruiter is also oftentimes not allowed to hit when it is also boosted by Judgebau Revenger, if you went second. On-hit strides have never been my favorite cards since they accomplish nothing if they were guarded.

My concluding argument therefore is that there is enough situations to warrant Doomed's use to make it worth playing. If we play the 4 Diablo-3 Aurageyser Dragon-1 Doomed lineup, we have all our bases covered. If we want to use Aurageyser Dragon on first stride, we have copies to use for it. If we decide that Doomed is the best choice to try to retire a problematic card while getting similar results that Dragon gives, we have that option as well. We can also use it as a critical gaining stride against grind match-ups where we don't want to pay three cards to use Phantom Blaster"Diablo", yet we still have four copies of it to not affect its usage for every other scenario. This however does require that you already play enough Pitch Black Sage Charons or Dark Heart Trumpeters to make it worthwhile. If your build minimizes Charon in favor of other tech choices, you might find yourself in far less situations where you'd see yourself playing Doomed, so in that case stick with Grim Recruiter.

That was lengthy, but the too long; didn't read version is: Doomed is an optional, solid one-of if you don't like on-hit strides, but it depends on your tech ratios. 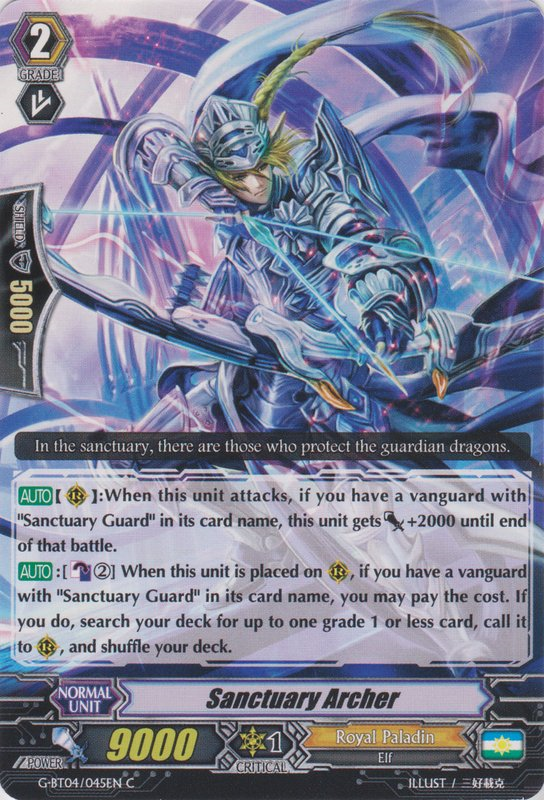 Sanctuary Guard got its own version of the infamous Jewel Knight, Swordmy. The question however is if it is better since the Swordmy engine has solidified itself as a staple in Sanctuary Guard decks. The pros of Sanctuary Archer is that it is a standalone 11k attacker, which helps build additional stages of power off Regalie's skill. Regalie boosts 9k to the front row with the standard three Grade 1 lineup, which would put Sanctuary Archer at 27k power, which hits past the 26k benchmark that Swordmy cannot reach. Sanctuary Archer is also far more reliable, you don't have to cringe every time you damage check and hope you get enough Jewel Knights to use Swordmy. The other pro is that Sanctuary Archer gives you free reign on what Grade 1s to play, which means you are not stuck with playing vanilla Jewel Knight units. Battlesong Angel is perfect for the role. A 9k boosting Grade 1 is perfect for the deck, as it allows 9k Grade 2s such as Knight of Twin Sword to hit over the 26k benchmark. Even Starlight Violinist hits exactly 26k if you have the standard three Grade 1 set-up. Resist is also potentially useful. 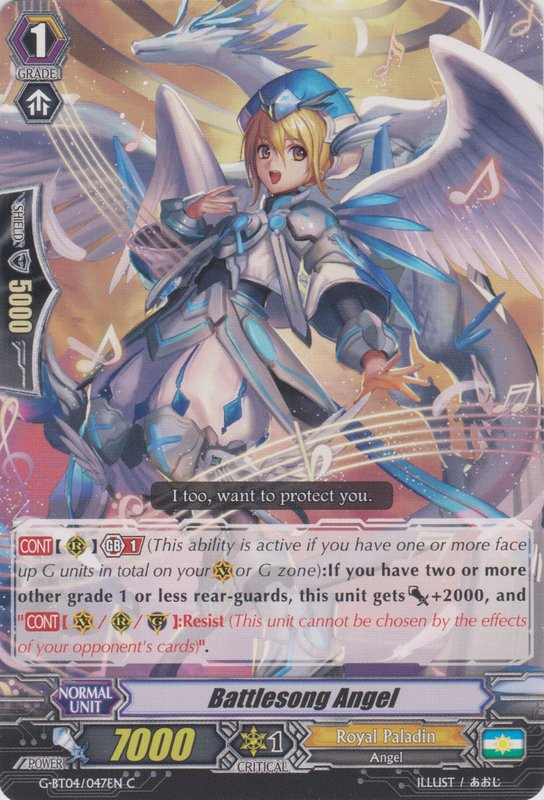 So of course there are cons as well. The most glaring one is that Sanctuary Archer costs one more Counterblast than Swordmy does. This is very relevant because it affects the longevity of the deck. What made Swordmy really efficient was that it filled the board while still conserving lots of Counterblasts for other units like Knight of Twin Sword. Archer isn't as efficient when dealing with board wipes, which will make your control match-ups tougher. Even though Battlesong Angel does have resist as said earlier, it is not all that useful since the decks it is meant to counter have productive ways around it, such as Root Flare Dragon, Big Bang Knuckle Turbo, Upheaval Pegasus, and so on. Resist is also a curse against Phantom Blaster "Diablo", which is important to consider. The other problem with the card is that it isn't as fast. Part of what made Swordmy so potent was that you can resolve it as early as Turn 2 if you were lucky with a damage check. Archer can only resolve on Turn 3 at earliest due to requiring a Sanctuary Guard vanguard, and it also turns you off from using Starlight Violinist on Turn 2 because of Archer's expensive cost.

The argument boils down to if it is better to pay more for higher quality, or if efficient yet lesser units are the better choice. The answer would be that it highly depends on your local metagame but I'm leaning towards Archer. If people play a lot of the dragon clans in your area, you're probably better off running Swordmy. But if people play other decks that don't disrupt your board, you can afford to go with the new, stronger units. If we're talking about a Regional or an ARG event, you're statistically far more likely to get paired against other clans than Kagero and Narukami in particular. Archer in my opinion provides enough buffs to make your other match-ups stronger, to the point where they swing even moreso in your favor now than they did previously. Against Revenger, just be smart about how many Battlesong Angels you play and it shouldn't be an issue. I also like that you are no longer reliant on damage checking Jewel Knights to resolve your superior calls. I've had plenty of games where I just could not damage check any Jewel Knights and my Swordmies were essentially dead weight.

That finishes my review for this week! Be on the lookout for Soul Strike Against the Supreme on October 2nd. As always, Play Hard or Go Home!