Cardfight Vanguard: What is Kagero doing in my Dark Irregulars?

When it comes to deck building in Vanguard, people usually tend to avoid mixing in units from different clans. This is because a lot of units in the game can only really work within their own clans. There comes a time however when a certain card is released and it shows synergies in completely different clans. One of those cards I'd like to discuss today is Demonic Dragon Mage, Mahoraga.

Mahoraga is a 5,000 power grade 1 Kagero that gains an additional +5,000 power when you retire an opponent's rear guard, until the end phase, making it essentially the successor to Demonic Dragon Madonna, Joka from the Kagero trial deck. This seems like a cute card to work with, since you can use cards like Demonic Dragon Mage, Kimnara and Berserk Dragon to easily kill off things and get a free 10,000 booster for the turn, but during the turns you can't resolve Kimnara or Berserk this card is a dead 5,000 booster that hardly creates any columns at all, so it's hard to make it universally effective in Kagero.

However, if we look at the card once more, we notice that it doesn't have anything that restricts it to the Kagero clan itself. As long as you're able to retire enemy units in your deck, this card can be a 10,000+ booster that fits in right with the rest of your grade 1's. Knowing this, what card can easily and efficiently retire units to keep this unit strong?

The title might have made the first thing I thought of obvious, but I feel that Demon World Marquis, Amon is most capable of showing Mahoraga's true colors. For those not familiar with Amon's skill, you can counterblast one and send any Dark Irregular on your field to the soul to force your opponent to retire a rear guard of their choice. In addition to this, Amon gains 1,000 power for each Dark Irregular in your soul during your turn. Now the idea behind their interactions is to use Amon's retiring skill each turn to retain constant 10,000 units on the board. This synergy only gets more deadly late game where each attack counts, and having 10,000 or even 15,000 boosters can make your rear guard attacks near impossible to guard. 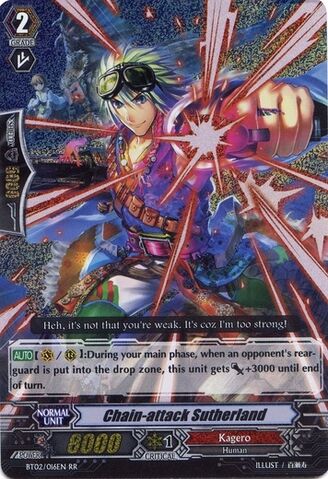 Before shifting away from Kagero, I'd like to emphasize two more units that operate similarly to Mahoraga. Chain-attack Sutherland and Blazing Flare Dragon are both units that gain 3,000 power for the turn when you retire an opponent's rear guard, for the duration of the turn anyway. Being grade 2 and grade 3 respectively allow you to incorporate the power ups from Amon to your front row as well. Chain-attack is probably better than Blazing Flare Dragon though, since you're better off having a Dark Irregular grade 3 as opposed to Blazing Flare when you don't have Amon. Having a Kagero vanguard will shut off a lot of your skills, mainly including your sentinels, so it's something to consider.

Looking at Blazing Flare Dragon however opens up a new group of possibilities. In addition to being able to pump himself up, if he ever is your vanguard, you can soul blast five during your turn to retire an opponent's rear guard. Considering this is Dark Irregulars we're talking about, isn't obtaining a high amount of soul to use its effect two or even three times fairly easy? Even if it's not a Dark Irregular grade 3, playing one or two copies of Blazing Flares can give you cool final turns if you've used up all of your damage on Amon already. 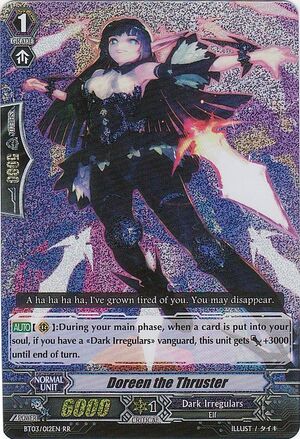 Moving onto Dark Irregulars, it is well known that they already have a lot of raw power to work with by themselves. Doreen the Thruster is one of the more popular choices. Being a grade 1 with 6,000 power, she has a skill that allows her to gain an extra 3,000 power whenever you soul charge until the end of the turn. That being said, you can have a combination of Doreens and Kageros around your Amon to easily threaten your opponent. Once you start popping cards with Amon, almost everything on your board will get stronger, creating huge columns that can exceed 25,000 very easily.

Now that I've gone over some of the more notable cards of the deck, what would a sample list look like? 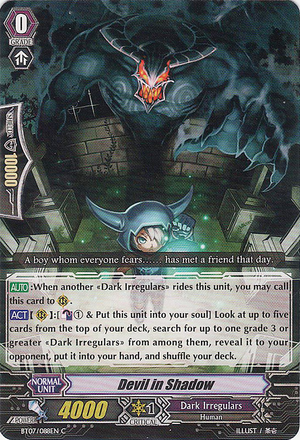 Starting at the grade 0's, I feel that Devil in Shadow and Greedy Hand can work equally as well. Greedy Hand can build up your soul and thin your deck of cards you wouldn't want to draw, while Devil in Shadow can increase the chances of you having Amon. I personally prefer to use Greedy Hand more due to its extra 1,000 power and the fact that it can power up Doreens by 6,000 during the turn you use it, but in most cases, both starters will end up being eaten up for Amon's counterblast, which is the most efficient way to use them as opposed to using cards in your hand. It should be noted however, that you won't always be calling your starter out, since some games you will end up having to ride Mahoraga, and since it isn't a Dark Irregular, you can't activate your starter's skill. 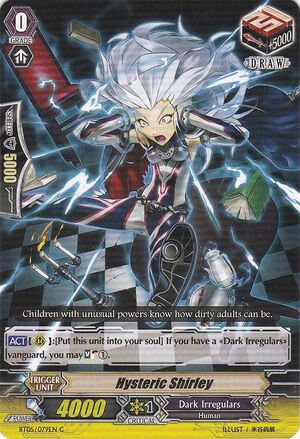 I prefer critical triggers to stand triggers in here because it's very easy to resolve the critical triggers for the extra damage. Amon itself can be very strong, and in times where it doesn't actually hit you can put an extra critical on one of your columns with a large Mahoraga behind it, so it can all work out in the end. The inclusion of five draw triggers is because I want to have easy fodder for Amon's skill without using valuable boosters or 10,000 shields, plus Hysteric Shirley provides more synergy with the deck by increasing your soul count and pumping up Doreens. Dark Knight of Nightmareland is also useful, since it can move itself to the soul when you feel like making a push to give a unit +3,000 power, along with an extra +3,000 to any Doreens you might have.

I feel like my grade 1 lineup is fairly standard for Dark Irregulars. Four copies of Doreen and Mahoraga because of their power output, four copies of March Rabbit because it's a sentinel, and two copies of Yellow Bolt for the extra soul charging if necessary. I feel that Yellow Bolt isn't needed and can easily be replaced by Alluring Succubus or Poet of Darkness, Amon, but I have it included because I'm more comfortable with using it.

The grade 2 lineup is fixated to power just as much as the grade 1 lineup is. Four copies of Demon of Aspiration, Amon provide consistent 11,000 power attackers, three copies of Chain-attack Sutherland increase the power output without running too much Kagero, three copies of Flirtatious Succubus give extra soul charging, and two Werewolf Siegers are solid grade 2 rides, as well as decent offensive units. 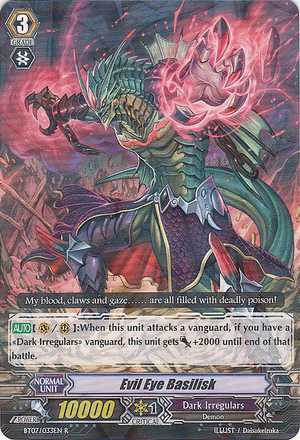 Finally, the grade 3 lineup basically focuses on having Amon as your main vanguard for most of the game. Evil Eye Basilisk is a simple 10,000 grade 3 that gains an additional +2,000 power when it attacks a vanguard. This can easily go over 21,000 power when backed by either Doreen or Mahoraga, which is why I decided to go with three copies. There's also the fact that not many other Dark Irregular grade 3s can work with Amon or the Kagero units. Lastly, the one Blazing Flare is included so I can use it as a strong rear guard or ride it late to finish the game.

Not many mixed clan decks work well in Vanguard, and this is just one of those rare occasions. There are others that exist right now, but this is honestly one of my favorite to play due to the numbers that your rear guards can reach with Mahoraga. Feel free to use the list as a skeleton for your own variants, as I heavily encourage it. You may not like some of my choices, but a lot of Vanguard deck building involves preference. There are cards that I'm comfortable with using in my decks and there are cards that you're comfortable using in your decks, so don't feel like you can't use what you want. Either way, I hope you give the deck concept a try, and thanks for reading.

Beyond the Top Deck: Approaching Testing
The Things to Come: The Impact of Set 5
Our Contributors