Hello there! My name's Caesar E.S, and this is my entry for ARG's Vanguard writing contest. I'm an Indonesian player who has played since BT-02 JP first came out, and a user of Dimension Police since BT-03 JP (You read that right. Well...mixed with Nova Grapplers, actually.) and am currently running Dimensional Robo decks both in ENG and JP. By chance, the team that uses Dimension Police in the anime is called Team Caesar. Coincidence? Probably. (Or not.) Either way, I'm very eager to write about my thoughts on the game, and of course, my favorite clan!

And today, I’m here to talk to you about Dimension Police. More specifically, one it’s key cards...

I like Dimension Police very much. I wanted to play it even before it came out, and once Set 3 came out, I even splashed in Dimension Police cards into my Nova Grappler deck. Enter Set 4, and  Dimension Police was now playable as a full clan. Out of all the cards in the (then) new set, one card in particular stood out for me. That card was Commander Laurel. 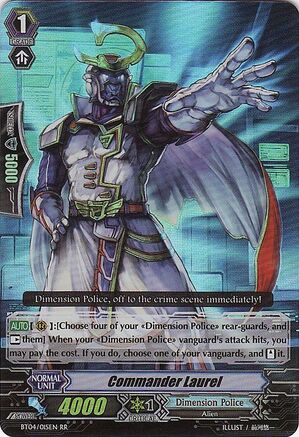 Dimension Police, off to the crime scene immediately!

Fun Fact: Commander Laurel very might well be a reference to Gekko Kamen, a Japanese superhero TV series that is considered to be the first in the Tokusatsu genre of movies, the same genre which would later consist of series such as Ultraman, Kamen Rider, and Super Sentai. (The last you might recognize as the series that got adapted into the Power Rangers.) Dimension Police is wonderfully full of such references. Jewel Beast, Jewel Mane is a reference to the money-eating monster Kanegon from the series Ultra Q, and the Zeal series is a reference to the alien Zetton, the monster that defeated Ultraman in the very first Ultraman series. Lots more  of these references, and I could go on and on about them. I know these things.

But back to the cards. At a first glance, Commander Laurel is way powerful. The ability to Stand your Vanguard, even at the cost of resting four rear-guards was exclusive to Dimension Police at the time of Set 4, and it was a powerful ability. Unfortunately, the other cards in the Dimension Police card pool at the time wasn’t so good. Laurel alone stood out as the most useful card out of all the others.  The ability to stand your Vanguard was a powerful one, and the idea passed on to cards like Dragonic Overlord the End, which was a defining card in it’s format and still powerful today. Laurel alone made up for the shortcomings Dimension Police had.

Fast forward to Set 8. Dimension Police became even more viable with the Dimensional Robo and Galactic Beast archetypes. But there’s no hype for Dimension Police, no word of Laurel.  Why is that?

Despite getting hype at the time of it’s release, Commander Laurel has now become one of the most controversial cards in the Dimension Police card pool. Some who advocate it’s use go all the way and use four, others opt out of it completely and run zero. I like Laurel. But I can’t say I don’t know where those that don’t like it are coming at. So let’s make a list of it’s pro’s and cons first to get a better understanding of the card and how it fits into the Dimension Police strategy. First, it’s cons.

It’s a 4k unit. To make a good line, you’re going to need either an 11k rear-guard or 12k attackers. Not much of that in Dimension Police. And in the worst case, you definitely don’t want to ride as a 4k Vanguard.

It’s conditional. Your attack has to hit to activate it’s effect. Your opponent will most likely have Perfect Guards in their hand, and the attack won’t go through.

It forces your game into a certain state. Having Laurel makes you focused into making only, and only Laurel-oriented plays, and that can be a bad thing. You will have to have a full field that’s open to be targeted by your opponent’s effects, and you have to sacrifice your rear-guard lines. Not using Laurel isn’t an option, because otherwise you shouldn’t have called him in the first place.

Now for the counterpoint. Laurel is good, because...

It’s effect is game-breaking. Having your Vanguard stand again without losing it’s Twin Drive can end games.  Needless to say, once your attack hits, your opponent will have a hard time guarding it if he/she attempted to guard the first attack.

It adds even more pressure to an already high-pressure line. Having Laurel will force your opponent to guard with a Perfect Guard if you have a high-pressure Vanguard such as Ultimate Dimensional Robo, Great Daiyusha. No one wants to be hit twice with 2 Criticals. Remember that trigger effects also still applies to your standing Vanguard, so any extra 5k’s and critical still applies.

You can get a lot of advantage. Needless to say, the ability to Twin Drive twice gets you a lot of advantage, especially if you run Draw Triggers. You can choose to just gain advantage instead of dealing damage by attacking the rear-guard and standing again. This is pretty useful to keep your opponent at Damage 3 until you have enough resources to go for the win.

You don’t need to hit the Vanguard. Check the effect text again. You can choose to attack the rear-guard and stand again, as the effect only requires you to have an attack connect, regardless if it’s directed to the Vanguard or rear-guard.

That’s about it. I lean more to using Laurel. With all points considered, he’s just too good to pass up. However, even the best medicine is best used sparingly.  You need to consider the rear-guard line that you’re sacrificing using Laurel plays. Is it worth sacrificing two 16 lines to stand your Vanguard again? It’s important to remember than even if Dimension Police bets it all on the Vanguard, you can’t win with your Vanguard alone. One thing to also consider is how fast you’re thinning your deck. Two Twin Drives means 4 cards per turn from drive checking, and that’s a lot of cards. Take care to not deck out.

At the end, Commander Laurel is a great card that opens up a lot of plays, but is best used sparingly and smartly. Try running 1-2, play smart, and you’ll be surprised at what this card can do.

THE SECRETS TO VANGUARD: ASPECTS THAT WILL GUIDE A PLAYER TO VICTORY
Don’t Call Me Maybe?
Our Contributors