Hey guys and gals, its me again. I'm back with my third installment of Cool Deck Ideas! Cosmo Blazer was recently released and I have a lot of ideas brewing inside of my head. Some of the coolest new cards in Cosmo Blazer are XYZ Remora, Fire Formation - Tenki, XYZ Dimension Splash, and Heraldic Beast Leo. Unfortunately, I couldn't think of anything all that neat with XYZ Remora, but I managed to build some really fun decks with the other cards. I hope you guys can give these decks a try and tell me your thoughts. My personal favorite is the new Heraldic archetype 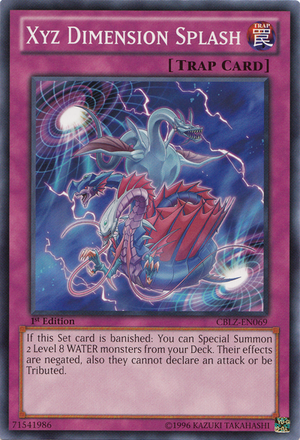 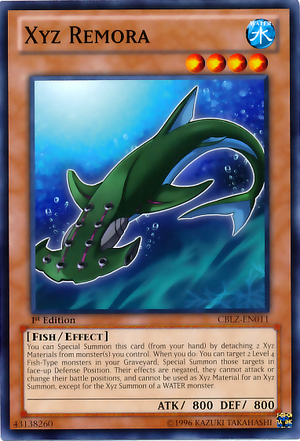 So lets get right into it. The brand new Heraldic monster, Heraldic Beast Leo, really makes this deck shine. Whenever it is sent to the grave from anywhere, you get to search for a Heraldic monster from your deck, other than itself... that would be  way too good if it could search itself. At 2000 ATK points, it can really be a big threat, and even when your opponent gets rid of it, you get a search! 1x Gorz the Emmisary of Darkness

1x Charge of the Light Brigade

This deck isn't necessarily filled with combos, but it does have a lot of neat tricks. Summoner Monk can pitch one of your dead spells in order to get a Leo from your deck. You can then XYZ into a rank 4 with them and when Leo is detached, you will get a free search! Speaking of rank 4s, this deck is filled with a bunch of level 4 monsters and it should be a piece of cake to summon them!

The Heraldry spell cards are just too good. Have you read them?!? One is a Monster Reborn for Heraldic Monsters and one special summons 2 Heraldic Monsters from your grave and immediately XYZ summons with them. Both of these cards work great in conjunction with all of the milling going on in this deck.

The Lightsworn/Card Trooper engine really shines in a deck like this. All of the Heraldic cards work best once they hit the grave, so the milling engine can really set you up.

Lightning Vortex is a great card for this deck. Not only is it a great piece of removal, but it allows you to get rid of some extra Heraldics in hand that will be better off in the graveyard.

The next deck I have to show you guys is a deck based around the card XYZ Dimension Splash. After quite a few games of testing, this deck has been doing quite well. It is filled with lots of cool tricks and I'm excited to show you them, so lets get right into it. FIRST OF ALL, let me say this. I am so excited that Konami has finally made a card that works well alongside Cards of Sanctity. For some reason, that card has always been a favorite of mine. I know it is almost always pretty garbage, but it is actually really good alongside a Swap Frog in this deck.

The Ideal hand in this deck would be something like Swap Frog, Nobleman of Extermination/Card of Sanctity, a Water Monster or 2, and XYZ Dimension Splash. You can use Swap Frog to deplete your hand of cards, while also fueling your grave with cards like Ronintoadin, Slushy, or Frogs. Then you set your Dimension Splash and use Nobleman or Card of Sanctity in order to remove the Splash from play. This will get you 2 level 8 Normal Water monsters from your deck. I usually get the Spiral Serpents because Slushy can bring them back. You also get the 2 cards from Sanctity. End result: A grave full of tricks, A field of any rank 8, and 2 new cards!

Aside from that, there really isn't too much to say about this deck. There is a lot of draw power to get you to the combo pieces and hopefully from there you can make some game changing XYZ monsters.

The final deck I have to showcase today is a pretty standard deck. The release of Tenki really gave this deck a boost, but I'm almost certain that Fire Fist will be the better choice at the end of the day. Something that this deck does a bit better than Fire Fist, however, is that it can drop monsters that consistently replace themselves. This can often be a problem for the opponent, especially when backed up with all of the trap support in the deck. 2x Horn of the Phaontom Beast

1x Gaia Knight the Force of the Earth

A card that I considered for the deck, but decided not to run is The Seal of Orichalcos. It is definitely a good choice for the deck. 1900 Attack Wind-Up Rabbits, 2200 Reborn Tengus, 2100 Bears, 2500 Rush Rhino. It all seems too good to be true, but with the boost comes a bit of a drawback. First of all, The Seal is not a piece of removal, or a piece of defense. It is just a card that kinda just sits there. Without a monster, it wont be doing much. You also can't XYZ or Synchro. That honestly can be a big problem for the deck. I find myself making Tiger Kings, Black Corns, and Catastors all the time. Without them, I dont think I would be able to get out of certain situations and I don't want a card like The Seal that will restrict my decisions.

Aside from that, I would say that this is another example of a simple deck. All the deck really does is drop a bunch of monsters that replace themselves alongside a bunch of traps in order to protect those monsters.

Well.. that's all I have for you this time. Every Cool Deck Ideas article will provide 3 decks and I try to make one of these article every other month or so, so stay tuned for the next one. You should also stay tuned to the ARG youtube channel next week for my Forbidden/Restricted list predictions. Here is a link to the youtube. http://www.youtube.com/alterrealitygames Make sure to subscribe!

Thanks for reading!
-Paul

Kaijudo Tournaments and the Future of the Game!
March Banlist Wishlist
Our Contributors