The articles in the Kaijudo section on ARG are very competitively-geared. As writers, we're creatures of habit. Our articles take many forms, but in the end, we all want to highlight winning decks and strategies, and try to reconcile what is winning with what we've found in our own personal testing. Usually, we're right on the money. Then again, sometimes you think you have the metagame figured out, and an inventive player throws a wrench into things.

Leave it to players out west to take on my assertion with gusto, and win while doing it. 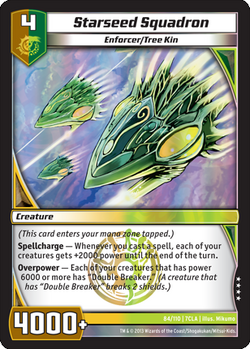 My first thought after seeing this a little over a week ago: "what a strange looking list." That's not meant as a dig on the deck by any means. It must have been really difficult for Preston's opponents to predict what was about to happen, because this deck is all over the place.

14 multicivizilation cards in a 40 card list is very ambitious, especially in a deck that wants to curve out with creatures from turn 2 onward. You could make the case that this mana base is greedier than that of Greed Dragons! Preston fully embraced all 3 colors, knowing that he wanted to turn on all of his colors as soon as possible. However, as the game progresses, you can get severely punished for constructing the deck this way. A fast tempo deck like this is already self-imposing a clock, but if you miss your curve because of an abundance of tapped mana, you're doubly shooting yourself in the foot.

Let's look closer, though. What makes this deck tick?

[ccProd]Starseed Squadron[/ccProd] is the way the deck wins. Make no mistake about it.

It's nice to have an early game with large creatures. Supremacy in the battle zone through power is a source of pseudo-advantage; you're forcing your opponent to deal with your creatures through means other than simply curving out themselves. Against WDL/WDLN/Keeper Control variants, however, early game creature power level is much less relevant. Those decks will cede the early game to you in favor of a more inevitable plan. No matter how big your cheap, efficient beater is, it only breaks one shield.

[ccProd]Starseed Squadron[/ccProd] throws this assumption out of whack when properly deployed. Turning an already onboard threat into an unforseen double breaker can really screw up the opponent's machinations, and gives them fewer turns to deal than they thought they had. Now they're playing on your terms. Sure, if they're able to survive your assault, they probably win, but that's the "leap of faith" you're taking by sleeving this deck up.

Let's get back to the multiciv ratio for a second. I still think it looks a little inconsistent, but it is made more bearable when you consider the ideal progression. Most decks have been throwing in a handful of multicivilization shield blasts to serve as additional removal and mana fixing. Leap of Faith, on the other hand, fully dedicates itself to the additional benefits multicivilization creatures experience once they hit the board. 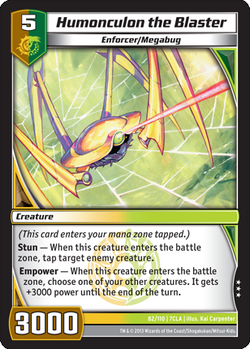 The deck plays 9 Light/Nature multicivs, but you want to be summoning every single one of them. Knowing that, your first turn or two will always mean doing whatever you can to turn on both Nature and Light. From that point on, you can pretty much bank on being able to mana any of the monociv cards in your hand in favor of the Light/Nature beater.

No deck has an unbeatable setup, but the ideal progression of any top deck needs to be staggering for a tournament player to consider it. Let's see how this line of play works out when uninterrupted:

At its best, Leap of Faith wins on the same turn an ideal Red rush deck would (barring the old "I drew 3 [ccProd]Blaze Belcher[/ccProd]s by turn 2 and didn't hit any blasts" nonsense. I've never done that, but I'm sure someone out there has lived the dream).

Leap of Faith's creatures are all bigger than rush's, and the 6-drops allow it to go in for the kill against any control decks that might be hanging on for dear life. Lyra needs no explanation, and [ccProd]Starlight Strategist[/ccProd] performs essentially the same function in this deck, assuming you're attempting to attack for lethal on the turn you summon him.

Is the Water Section Necessary? 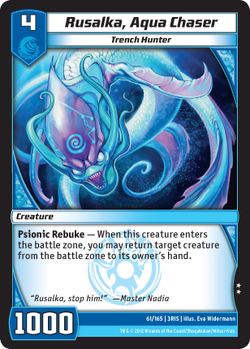 Of course, you're not playing against your goldfish in a KMC. Your opponent won't always just sit idly by and allow himself to get beaten down by your Light/Nature guys. That's where the Water section comes in. We already know [ccProd]Piercing Judgment[/ccProd] is an exceptional shield blast since it's cheap and it deals with two threats. In this deck, the creature you tap will almost certainly get run over, since your guys are so huge. [ccProd]Rusalka, Aqua Chaser[/ccProd] lost its luster when DragonStrike Infernus hit the shelves for fear of [ccProd]Infernus the Awakened[/ccProd] and [ccProd]Herald of Infernus[/ccProd], but here it does everything you want it to do. Any midrange deck that curves out with big creatures really wants removal and a body in a single package, and that's what Rusalka gives you. [ccProd]Aqua Seneschal[/ccProd] also joins the fray, giving you an alternate line of play if you don't have any way to buff your Sword Horned. Honestly, it's easy to forget how good the Seneschal is. Two uninterrupted breaks means a significant amount of extra gas in the Leap of Faith tank. Finally, [ccProd]General Finbarr[/ccProd] serves as additional copies of those two cards in one, and helps you put away the control decks.

There are some question marks in the Water section, though. [ccProd]Logos Scan[/ccProd] is a great card, but I have my doubts as to whether this deck can ever afford to not summon a creature on turn 3. Preston seems to have realized that [ccProd]Logos Scan[/ccProd] is merely a backup plan, and only included 2 copies. I might have cut them altogether.

[ccProd]Memory Keeper[/ccProd] is also very baffling. Yes, 2500 power is large for a two drop, but given the pressure you're putting on yourself to unlock all 3 colors in the first two to three turns, you'll never plan your mana decisions around wanting to actually summon him on turn 2. Even if you do, all of your common means of boosting power through the Starseed come up short when [ccProd]Memory Keeper[/ccProd] is involved. You'll need two spells to get him over 6000 power -- the same as virtually any other 2-drop. Humonculon's buff only juices him up to 5500 power. I really don't see any use for this card besides mana fixing. The important thing to note about this deck, though, is that your blue cards are all supporting players. As long as you unlock Nature and Light, you're good to go. You're usually fine with sticking a mono blue card in your mana zone to unlock Water for a 2nd mono blue creature you want to summon. The ideal sequence of plays doesn't necessitate multiple Water creatures. So why do you want additional Light/Water mana fixing? I can see that Preston may have thought he wanted another large 2 drop to combat rush decks, but [ccProd]Memory Keeper[/ccProd] is a very awkward way to go about this. I'd go so far as to say this deck would rather have a couple copies of [ccProd]Reef-Eye[/ccProd] if that's the line of thinking.

Is It For Real? 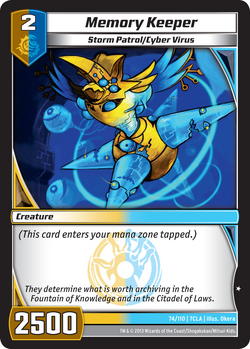 Michael Swartz just took second at the Indiana KMC this past weekend with his own spin on this deck. The list is wildly different (it appears to be a budget version that made a nice call by including 3 copies of [ccProd]Dawnflower Quartz[/ccProd]), but the principles are the same. Whatever you may think of the deck on paper, two consecutive KMC top 2 finishes means the deck is legitimate and goes right into my testing gauntlet.

While cheap creature beats are fun, and the deck has a decent bit of consistency in its singular goal, I still think it falls a little short of being a top contender. Preston Brimage himself realized this in naming the deck "Leap of Faith" -- you need to hold your breath, cross your fingers, and tap your cards. Hitting any high impact shield blasts on your first or second attack can be devastating. Giving Keeper Control even a single turn to stabilize means you're already behind. They can summon blockers and pick your Starseeds out of your hand with [ccProd]Mesmerize[/ccProd]. The deck also seemingly has a very difficult time against rush decks. Yes, your creatures are larger so you can reliably revenge attack over your opponent's, but you play only 6 "real" shield blasts. [ccProd]Stormspark Blast[/ccProd] only does so much because the red deck is resigned to losing its creatures in battle anyway. How do you deal with a [ccProd]Gilaflame the Assualter[/ccProd] in their hand? You basically just have to beat them first or pray you have all your [ccProd]Root Trap[/ccProd]s in shields. That's not a very fun position to be in.

Leap of Faith is a refreshingly original take on a strategy that is tried and true: beat face as fast as you can with the biggest creatures you can muster. Is it a top pick for the remaining KMCs? The jury is out on that one, but don't sleep on this deck or you might find yourself getting 4-0 creamed.

The Winning Touch: Evilswarm Trends
Exploring the Side Deck: Psi-Blocker vs. Tsukuyomi
Our Contributors