The French New Wave, or “Nouvelle Vague,” was a period in filmmaking during the late 1950s and early 60s in which many traditional conventions were thrown out the window. New Wave films pioneered and popularized many techniques commonly seen today, such as “tracking shots,” “jump cuts,” and “breaking the 4th wall.” It is fitting that the upcoming Kagero sub-archetype, Nouvelle Vague, draws its name from a period of great change in artistry.

Set to be released later this month in Japan, the extra booster set Divine Dragon Progression includes the first real grade 4 unit, Transcendence Dragon, Dragonic Nouvelle Vague. How will another grade influence deck ratios, and is its power worth any trouble it may cause during deck construction? Will it be able to “transcend” the lofty bar set by previous Kagero units such as Dragonic Overlord the End & Dauntless Drive Dragon? A lot will depend on what kind of support the archetype receives… Let’s take a look at what’s been spoiled thus far! 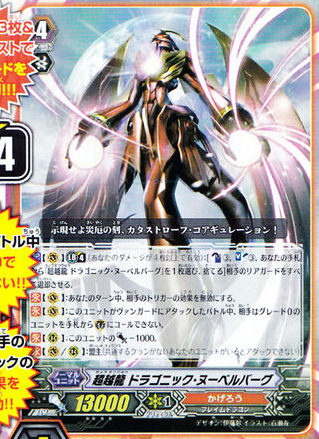 The marquee card of the set, Transcendence Dragon will be the first grade 4 unit to be geared towards tournament play (previous promo cards such as Epitome of Knowledge, Silvest and Eternal Wing were designed purely for fun or casual play, and are not tournament legal). It weighs in with a hefty 13k base power, going toe-to-toe with Cross Rides on offense & defense. It has five abilities, each of which we will examine individually:

1. [ACT](VC) Limit Break 4 (This ability is active if you have four or more damage):[Counter Blast (3) & Soul Blast (3) & Choose a card named "Transcendence Dragon, Dragonic Nouvelle Vague" from your hand, and discard it] Retire all of your opponent's rear-guards.

Transcendence Dragon’s Limit Break ability can be activated when it is on the vanguard circle and its owner currently has 4 or more damage. It is a persona blast skill, similar to Dragonic Overlord the End, meaning that the player will need to be running multiple copies of Transcendence Dragon in order to activate it reliably. By counter blasting & soul blasting 3 cards each, as well as discarding another copy of itself, Transcendence Dragon can wipe the opponent’s field of all their rear-guards. Needless to say, this is an incredibly powerful ability with an equally high cost, and will likely be activated once per game at most. However, a well timed field wipe may be all you need to insure victory, especially given the Dragon’s next two abilities:

2. [CONT](VC):During your turn, the effects of your opponent's triggers are negated.

This one, simple line of text is unlike anything we’ve seen, and has no cost or prerequisite other than reaching G4. Have you ever lost a game because your opponent healed on their 6th damage? Or had them hit running draw triggers on defense to get back into the fight on the following turn? These scenarios literally can’t happen whilst Transcendence Dragon is your vanguard. Not only can are they unable to receive heal or draw trigger effects, they lose out on the +5k boost from hitting any triggers on defense. This on its own can swing a game into your favor, as it helps insure your rear guard columns will get in damage, or at the very least require a hefty card investment to block. Sadly, this continuous ability doesn’t work on your opponent’s turn, but can you really complain? Next up:

3. [CONT](VC):During a battle that this unit attacks a vanguard, your opponent cannot normal call grade 0 units to (GC) from his or her hand.

This is an effect we have seen before, on a card called Silent Tom. A card which does a lot to carry a clan which has not received much support as of late, at least in comparison to other clans with both Break & Cross Rides. Preventing your opponent from guarding with nearly 1/3rd of their deck is absolutely game breaking, not to mention being tacked onto a unit with twin drive and a trigger negation effect! 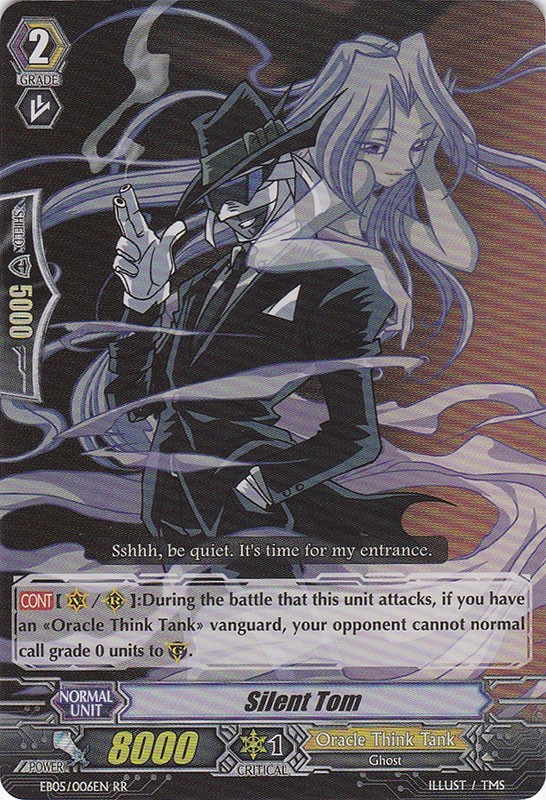 It is worth noting the verbiage used in both this card & Tom’s abilities, in that they only prevent G0 guards from being “normal called” from the hand. This is important, as some new, yet to be released perfect guards actually superior call cards from the deck to guard rather than negating the attack completely (Summoning Jewel Knight, Gloria). An article for another time, as such units have only been seen in the anime thus far, and as of this time have unconfirmed abilities.

The first skill that looks anything like a drawback, Transcendence Dragon receives a 1k power reduction when placed on a rear-guard circle. Unlike previous psuedo-G4 units such as Exculpate the Blaster, Transcendence Dragon is perfectly usable as a rear-guard attacker, provided you’ve reached G4 to normal call him. Given this scenario of having already ridden another copy, you may want to leave it in the hand for the purposes of its Limit Break ability or for perfect guard fodder. Even so, it can serve as an excellent attacker in a pinch, hitting opposing 11k vanguards un-boosted and forming a 20k column when paired with a standard 8k G1 vanilla.

5. [CONT](VC/RC): Lord (If you have a unit without a same clan as this unit, this unit cannot attack)

Transcendence Dragon’s final ability is the standard “lord” clause, which serves only as splash prevention. Bushiroad has thus far been reluctant to allow or support hybrid decks, likely in order to save “dual clans” as a future mechanic to help sell a set (or two, or three…).

All things considered, Transcendence Dragon, Dragonic Nouvelle Vague certainly has the tools to see play. But given the importance of ride consistency in Vanguard, what is preventing this unit from being used as a 1-of late game finisher in a traditional Kagero deck? 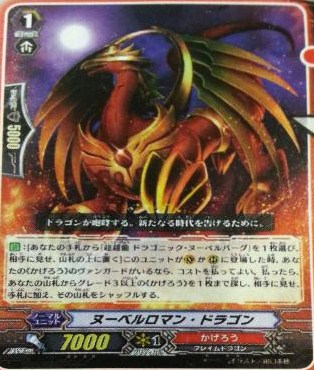 [AUTO]:[Choose a card named "Transcendence Dragon, Dragonic Nouvelle Vague" from your hand, reveal it to your opponent, and put it on top of your deck] When this card is placed on (VC) or (RC), if you have a «Kagero» vanguard, you may pay the cost. If you do, search your deck for up to one grade 3 or greater «Kagero», reveal it to your opponent, put it into your hand, and shuffle your deck.

This card is the glue that will hold the pure Nouvelle Vague deck together, and may even push it over the top of traditional G3 decks. When ridden or called, the player may discard a copy of Transcendence Dragon, Dragonic Nouvelle Vague in order to search for any G3 of their liking, essentially turning all of your copies of Transcendence Dragon into G3 units. Provided you are running 4x Roman Dragon, 4x Transcendence Dragon, and 4x “insert G3 here,” your odds of riding to G3 on turn 3 are much closer to normal than they would have been otherwise. As a pure bonus, this card is a 7k base, the perfect number for competitively playability on a G1.

But which G3 shall we ride? 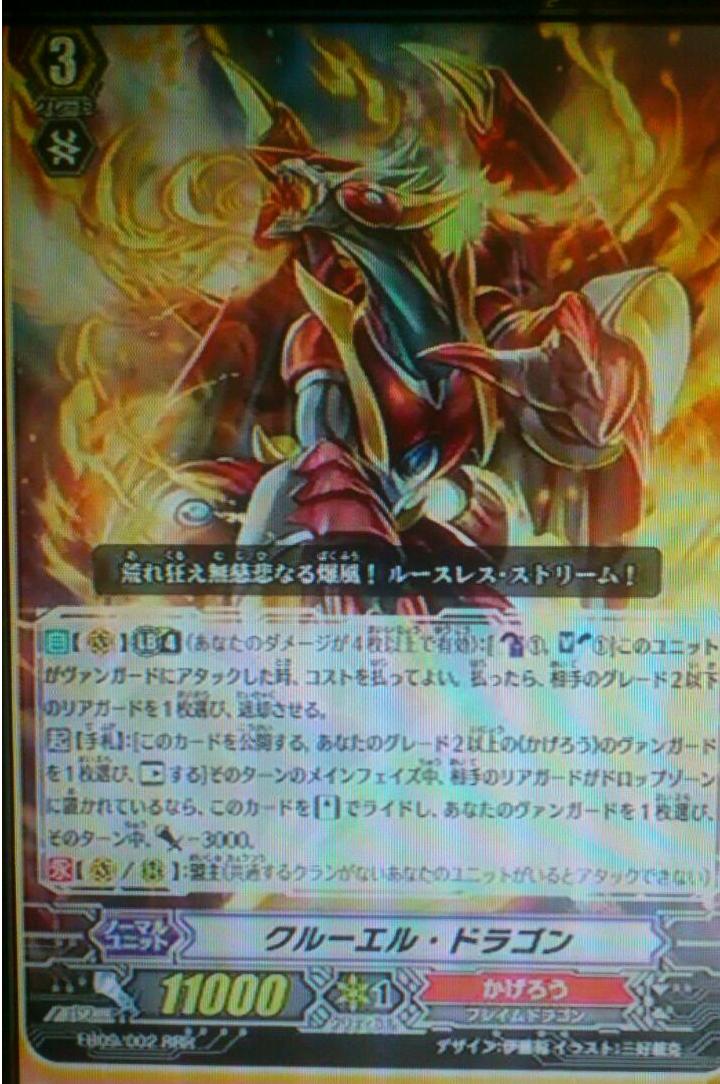 [AUTO](VC) Limit Break 4 (This ability is active if you have four or more damage):[Counter Blast (1) & Soul Blast (1)] When this unit attacks a vanguard, you may pay the cost. If you do, choose one of your opponent's grade 2 or less rear-guards, and retire it. [ACT](Hand):[Reveal this card & Choose your grade 2 or greater «Kagero» vanguard, and [Rest] it] If one of your opponent's rear-guards is put into the drop zone during the main phase of that turn, you may ride this unit as [Stand], and choose your vanguard, and that unit gets [Power]-3000 until end of turn. [CONT](VC/RC): Lord (If you have a unit without a same clan as this unit, this unit cannot attack)

This card will undoubtably see play outside of the Nouvelle Vague archetype deck, but it is perfectly suited for use here as well! It is an 11k base power unit, the standard for G3 units in the current age. It can be superior ridden from G2 when one of your opponent’s rear-guards is retired on your turn, netting a neat +1 off of twin drive at the cost of a small drop in power (-3k until the end phase). It also has a beneficial Limit Break ability, counter blasting & soul blasting 1 card each when it attacks a vanguard in order to knock out a G2 or less rear-guard. This card is awesome, and will breath new life into older, borderline cards such as Demonic Dragon Mage, Kimnara. It is searchable by the aforementioned Nouvelle Roman Dragon, and combos perfectly with another new unit: 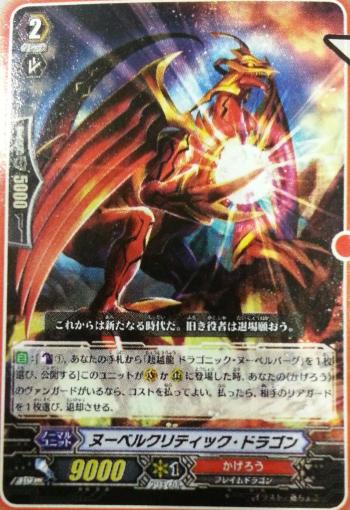 [AUTO]:[Counter Blast (1) & Choose a card named "Transcendence Dragon, Dragonic Nouvelle Vague" from your hand, and reveal it] When this unit is placed on (VC) or (RC), if you have a «Kagero» vanguard, you may pay the cost. If you do, choose one of your opponent's grade 2 or less rear-guards, and retire it.

Nouvelle Critic Dragon boasts a respectable 9k power, a great base number for G2 units. Its ability allows the player to counter blast 1 card and reveal a copy of Transcendence Dragon, Dragonic Nouvelle Vague in their hand when it is ridden or called to retire an opponent’s G2 or lower rear-guard. This effect sets up Cruel Dragon’s superior ride by itself when called as a rear-guard, provided you also have a Transcendence Dragon in hand. Some things have to fall in place in order for it to work, but if it does, you are well on your way to a victory! 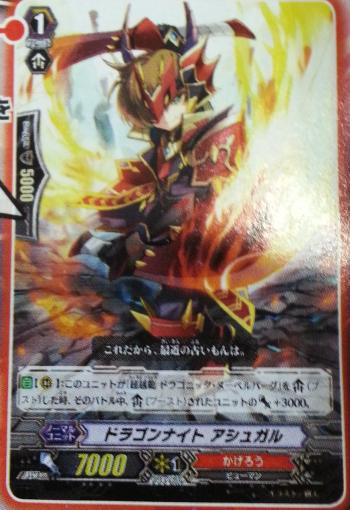 Power Creep or Too Inconsistent?

The Divine Dragon Progression extra booster is confirmed to contain 35 different cards, only 12 of which are new. Nearly half of those 12 have been discussed here. As the archetype has not yet been released in Japan, we have a few weeks to wait before we can observe its effect on the metagame. The power of Transcendence Dragon, Dragonic Nouvelle Vague cannot be denied, but its playability will depend on how consistently a player can reach G3 first in order to ride it. Nouvelle Roman Dragon does a lot to help, but if it is the only card with this type of tutoring ability, it may not be enough. On the other side of the coin, consistent access to G4 will only lead to G4 units being printed for other clans alongside their own similar support units. This would perpetuate power creep, which we’ve already seen in the “progression” from normal G3 > Cross Ride > Break + Cross Ride. 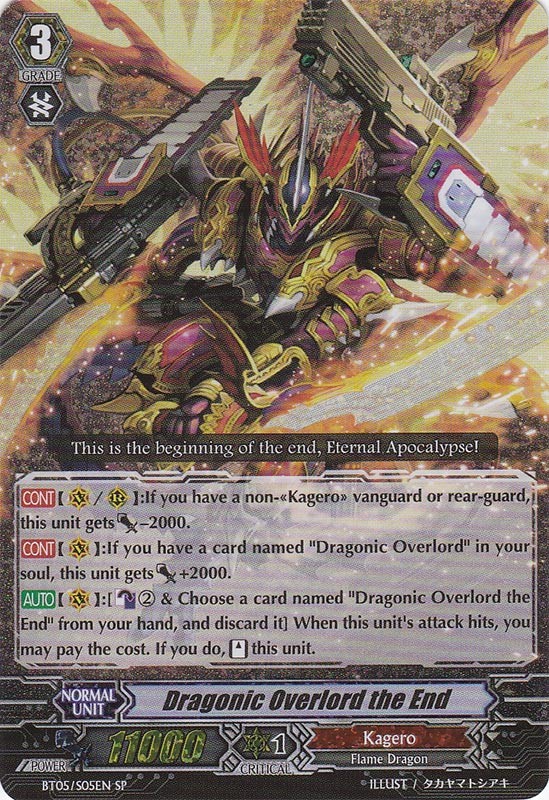 Nevertheless, I am super excited to get my hands on this archetype! Kagero was my first deck when the game released in the U.S., and I was also an avid supporter of the DOTE deck during its reign. A North American release date has not yet been set, but Bushiroad’s release schedule has varied from simultaneous to months later. The possibility exists that we may see these dragons sooner than expected…

A new extra booster, Divine Dragon Progression will be released in Japan on November 22nd, 2013. An english release date has not yet been announced. The set contains Transcendence Dragon, Dragonic Nouvelle Vague, a powerful G4 Kagero unit, and accompanying support to help ease riding it consistently.

Paul McCann is a current Cardfight!! Vanguard and former Yu-Gi-Oh! player who has contributed to ARG as a guest writer in the past. He has 2 SJC top finishes from the days of yore, one with Toon cards in his main deck not named “Toon Table of Contents!”

Princess of the Mermaids, Lena
Basic Metagaming: How it Works and the Archetypes (Combo, Control and Aggro)
Our Contributors