You are here: Home / FOR JUSTICE!!!
Categories: Cardfight Vanguard
by Kevin Mathew I remember back when I was a kid I would wake every Saturday to watch the Mighty Morhpin Power Rangers and as I would practically glue my face onto that TV as the Rangers would fight the monster of the week and defeat it.  I don’t know what it was that made the show so appealing to me but I and just about every other kid my age would watch the Rangers as they fought every week to protect our planet from complete domination from the forces of evil.  Even now as grown-up, I still enjoy sitting down and watching the Rangers and other tokusatsu (Japanese live action series) heroes such as the Kamen Riders and the Ultramen do battle all for the sake of justice, peace, and humanity.

The reason why I bring up my childhood and my love for such shows is because the clan I am going to talk about the culmination of these shows into one: Dimension Police.  Dimension Police is a clan that was first released with only 3 units in set 3: Karenroid Daisy, Workerpod Saturday, and Super Dimensional Robo, Daiyusha.  It wasn’t until the release of set 4 that people were able to not only build a functional Dimension Police deck, but also be introduced into both a new ride chain and a new playing style. 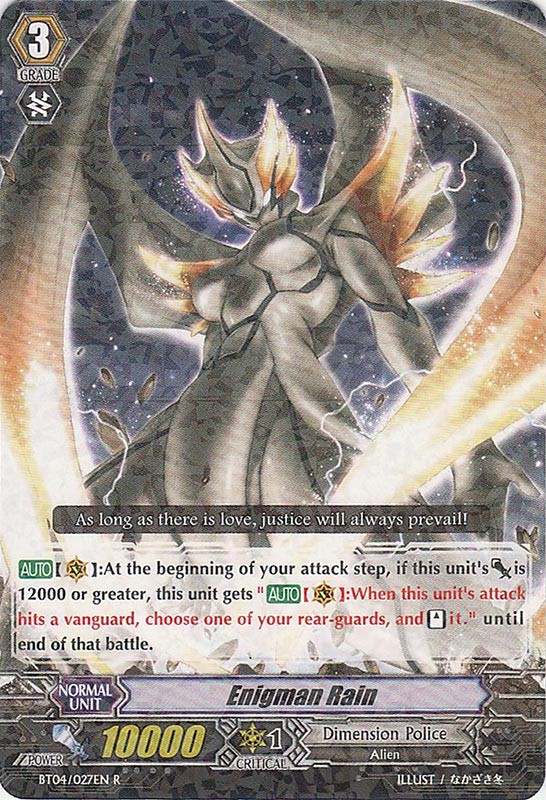 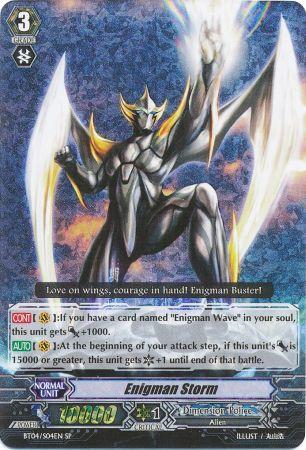 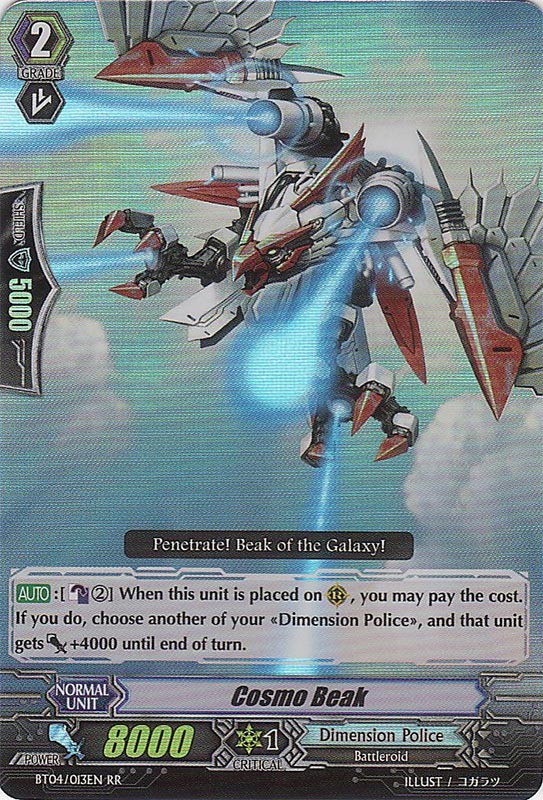 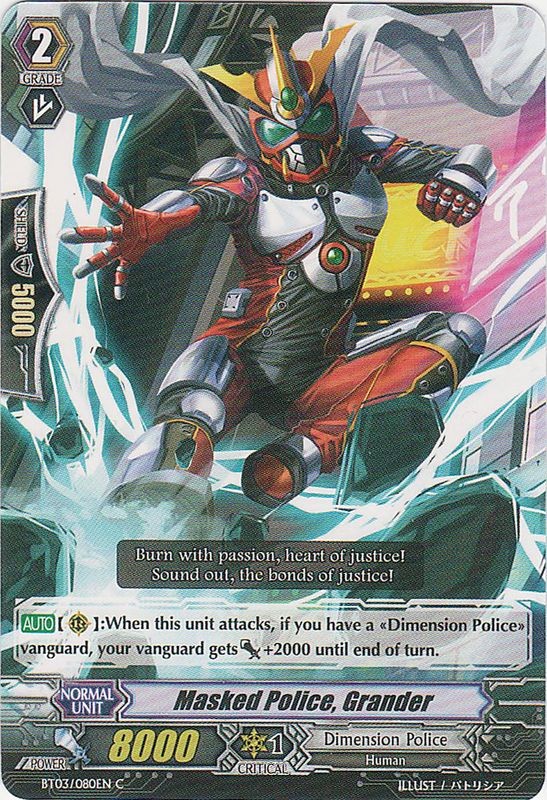 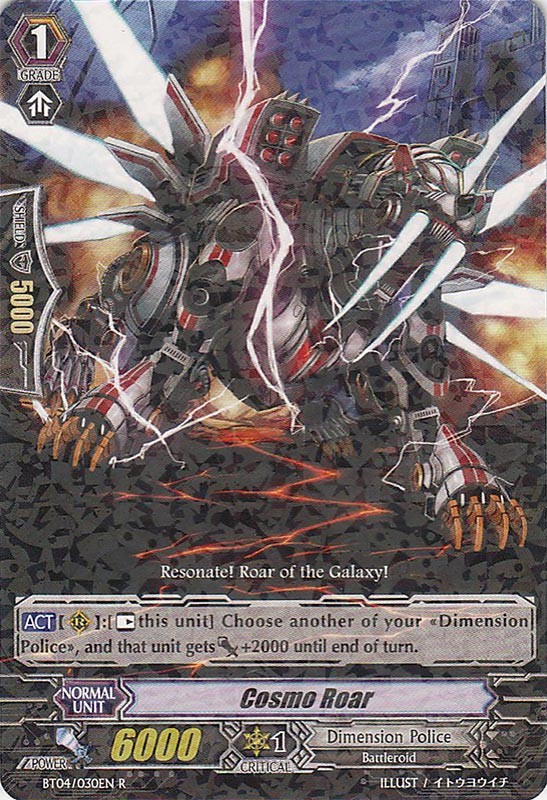 With the release of set 5, Dimension Police were bestowed their owed grade 3 rearguard: Miracle Beauty. 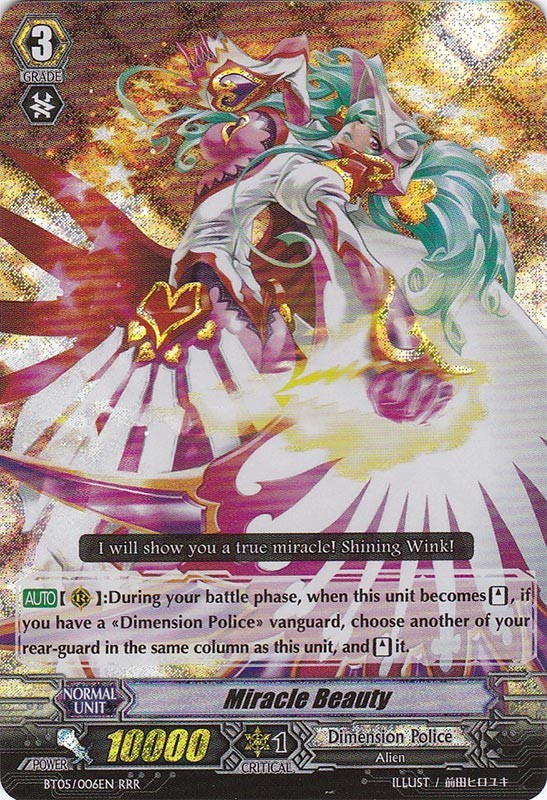 . This unit alone further boosted the possibilities of the strength of Dimension Police and gave the often less-used Stand Triggers a purpose of a real threat.  This unit also made Enigman Rain a threat in the sense that all it would take is for rain to hit as the vanguard to stand a rested column with Miracle beauty in front for a fully powered assault at the vanguard along with any attack made towards the rearguard not such a waste anymore when Miracle Beauty stands.

Now some people may be wondering why I included two critical triggers into the trigger lineup.  The use of critical triggers was a trick I picked up at the Edison regional back in October.  Round 4 I faced a Nova Grappler player who ran two in his deck for the simple fact that it is a surprise factor.  While Nova Grapplers are known for their vast amounts of standing, your opponent does not have to guard as heavily as if they were to be facing a deck that has critical triggers.  Critical triggers allows for a more punishable effect if your opponent does not guard enough for the attack and even if they do guard enough, you can put all of the effects to the rearguards to make them more destructive

The main weakness with this clan currently is their extreme reliance to their rearguards.  The more of their front row they lose the worse they will be which makes Kagero the bane of their existence.  With set 8, however, the clan can live through both Great Daiyusha and the Zeal ride chain.  Out of the two, the Zeal ride chain is more destructive since its Limit Break is a reverse Soul Savior Dragon in which the opponent’s vanguard loses power equal to the number of rearguards you have.  This ensures that your opponent will have to drop more cards in their hand in order to block your attack.

All in all, if you want to relive your childhood memories of justice and want to have a fun deck to play, play Dimension Police.

Upping Your Game: Plunging into Large Events
Snake in the Grass: Six Samurai
Our Contributors