Hello, once again Cardfighters! Today, I come to you with one of the most underrated decks in our current Meta; Gear Chronicle. For those of you who don’t watch the anime, here’s a little bit of background information. Gear Chronicle is the Clan played by the current protagonist in the anime series “Cardfight! Vanguard

G.” Even with this kind of notoriety, this clan has been swept under the radar and for the most part completely written off in top tier lists. One of the most recent examples of this situation comes from the results of some of the bigger tournaments this card game

holds. These events took place overseas in the Japanese Meta, where just like in Yugioh, they receive all the new sets earlier than we do. Now, in these tournaments, we only saw three people playing Gear Chronicle and of those three, it was only played in a single tournament. Simply put, two of the largest Cardfight Vanguard events saw the complete absence of Gears, and in its place the resurgence of Shadow Paladins.
Every clan in this game has its own skill. The one gimmick that makes that clan stand out from the rest and for Gear Chronicle, the ability is the Rewind. This clan specializes in taking your opponents rear guards and moving them to the bottom of your opponent’s deck. Not only that, but with the release of Generation booster 2, we saw the release of new cards that have effects triggered by Rewinding your opponents Rear Guards. The New legion for example, “Nixie Number Dragon” Its effect states, “When your opponent’s rear-guard is put back into his or her deck due to an effect from one of your cards, if this unit is LEGION, until end of turn, this unit gets [Auto](VC): When this unit attacks a vanguard, until end of that battle, your opponent cannot call grade 1 or greater cards from hand to (GC).” Not only that, but if you have a card boosting Nixie Number Dragon, it gains an extra 3000 Power until the end of that current battle
Nixie Number Dragon isn’t the only card that is able to put this kind of restriction on your opponent. Guard Restriction has been around since the early days of vanguard. This skill states that you r opponent can’t call a specific grade to the guard circle when it attacks. With Gear Chronicle, the Guard Restriction ability meshes nicely with their Rewind ability. It opens up the door for multiple combos that use very few resources to pull off. The majority of the units with Rewind have a cost of counter blasting on card in your damage zone, with the exception of Relic Master Dragon who requires you to counter blast two of your damage in order to perform a Rewind. Other valuable units in Gear Chronicle have a particular requirement that needs to be met before you can use the Rewind skill. One of these powerful units is Steam Fighter Amber, who requires that when it attacks a vanguard, if it is boosted you may pay the cost to rewind. Another card that has a requirement to rewind other than counter blasting is “Chronojet Dragon.” He is the Avatar or favorite card of the main character in the show. 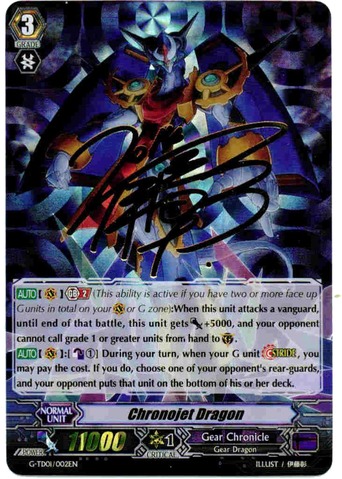 Chronojet Dragon’s skill states [Auto](VC):Counter blast 1 during your turn, when your G unit STRIDE, you may pay the cost. If you do, choose one of your opponent’s rear-guards, and your opponent puts that unit on the bottom of his or her deck. This is a great skill in itself, however, that isn’t the only skill that Chronojet Dragon has. There is a second effect that is even greater than his Rewind ability. If you meet the requirements of Generation Break 2 or higher, which means you have 2 or more face up STRIDE units in your G zone you can access his secondary ability. It allows him to put a guard restriction on your opponent if you have two face up STRIDE units, as well as boosts him an extra 5000 Power. The restriction is the same as Nixie Number Dragons, restricting Grade 1 or higher cards from being called into the guard circle.
With all these units using your resources, it would be impossible to reuse effects without some way to replenish your used counter blasts. That’s where these three cards come into play. They are a valuable resource to the clan and to any Gear Chronicle player. The Names of these units are Steam Fighter, Mesh-He, Steam Maiden, Arlim , and Distance-Running Gear Horse. 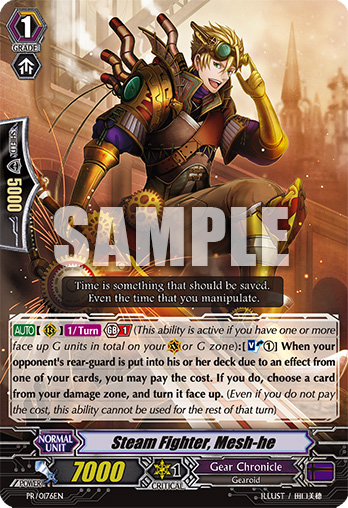 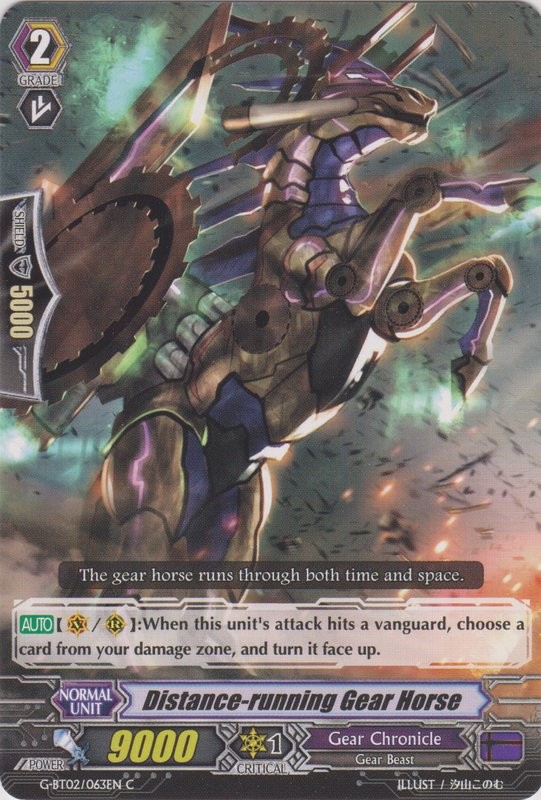 Mesh-He unflips damage when you Rewind a card and for cost you have to soul blast one card. He is easily run at three copies in most Gear Chronicle decks, and for a good reason. It’s very easy to set up combos that burn multiple counter blasts and then just have Mesh-He on board to help you unflip what you just used. Mesh-He like Chronojet Dragon has the Generation Break requirement. Steam Maiden, Arlim is the clan’s main Perfect Guard. A Sentinel or Perfect Guard as they are more commonly known allows you to nullify an attack that is targeting your vanguard by calling it to the Guard Circle and discarding a card from your hand. When you use her effect to nullify an opponent’s attack, f you have another copy of Arlim in your drop zone, you can unflip 1 damage in your damage zone. Since “Steam Maiden,Arlim” is a perfect guard, she is run at 3-4 copies in most competitive Gear Chronicle decks. It’s an added bonus

that she unflips damage while protecting the Vanguard. Last on this list is Distance-Running Gear horse. It states that when this unit attack hits a vanguard, choose a card from your damage zone, and turn it face up. Initially, I had high hopes for this card when it was announce, however, after play testing with it for a couple weeks, I slowly found it less and less useful. There are just too many other cards that can be more beneficial in its place.
Partnering Mesh-He with any of units with the Rewind skill can create combos that will leave your opponent with no rear guards, causing them to expend valuable resources from their hand in order to block your attacks. But no deck is complete without a sixteen card trigger line up and Gear Chronicle has some powerful triggers. Now nearly every clan has similar triggers that have standard effects like soul charge the trigger and give a small power boost to your rear guard. But in recent days there has been a slew of new triggers to come out, one of which is the new critical trigger that allows you to soul charge it, boost your vanguard by 5000 and draw a card. Gear Chronicle took it one step further, they have Two triggers that stand out to me not only because of their effects but because they are stand triggers. Wakey Wakey Worker and Vainglory-dream Gear Cat. 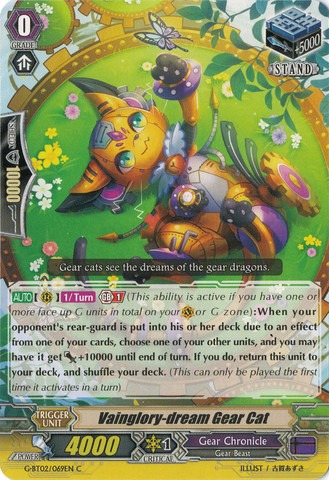 Wakey Wakey Worker’s skill states if you are “[GB1] at the end of the battle this unit boosted, chose a face up G unit card in your G zone, and you may turn it face down, If you do , return this unit to your deck, and shuffle your deck.” Now, you can recycle any STRIDE unit that requires a Persona Flip (flipping over a copy of itself in order to activate an effect. Wakey Wakey Worker opens up a while now level of recycling your cards. The second stand trigger Vainglory-dream Gear Car also recycles itself but it has a boost effect. When you Rewind a card you can choose one of your other units and give it plus 10000 power, and if you do it will bounce itself back into the deck and allow you to shuffle once again. Both of these triggers give the deck that little added power. To top it all off since both are stand triggers it gives you the ability to untap one of your Rear guards, giving you a fourth attack.
As good as these units are for recycling and reusing resources, none of these previously mentions units can compare to the power of the Gear Chronicle boss monster. For numerous Cardfighters, this card as seen as the clans win condition. It’s a card that has gained quite the reputation in previous months and for good reason. This card, is “Interdimensional Dragon Ragnaclock Dragon.” 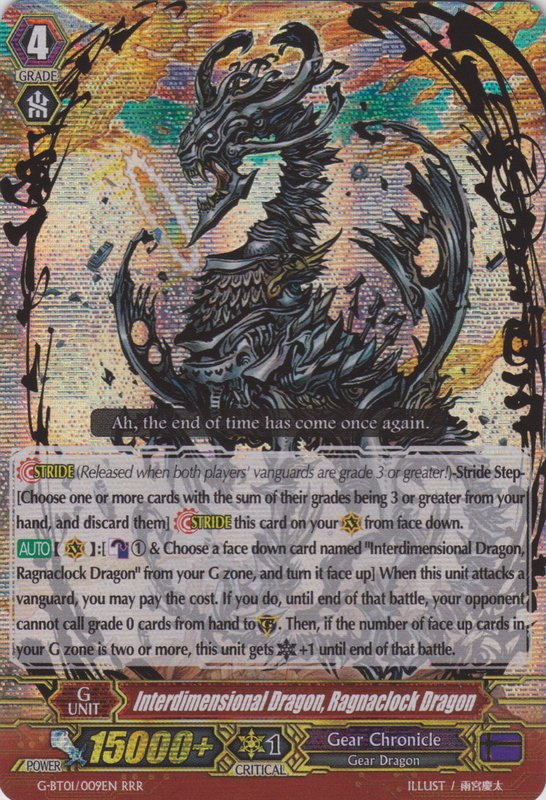 Ragnalock’s skill states Counter Blast 1 and persona flip. “When this unit attacks a vanguard, you may pay the cost, if you do, until the end of that battle, your opponent can not call grade 0 cards from hand to the guard circle. Then, if the number of face up cards in your G zone is two or more, this unit gains +1 critical until end of that battle.” Ragnaclock is the perfect late game tech. If your opponent hasn’t held onto a perfect guard, then it will be extremely difficult to stop the attack. If they are able to stop Ragnaclock’s strike, then any triggers gained through his triple drive can be partnered with another guard restrictor like Steam Knight, Puzur-Iii who also stops grade zeros. When used properly, Ragnaclock can easily be the one thing that wins you the game.
But no clan is without a weakness or detriment and Gear Chronicle is not a stranger to this ideal. The majority of their effects revolved

around you being Generation Break one or two. This flaw in the past has made it easy to out play Gear Chronicle. All that you needed to do was stall out at Grade three and slowly beat down the person using Gear Chronicle. Since your opponent wasn’t at grade three you wouldn’t be able to stride and thus all your effects would basically be nullified with few exceptions. That is until the release of Generation Booster 2 aka GB02, we have seen more rear guard support as well as more cards with the Rewind ability. Gear chronicle will now have multiple outs to this slow

play stall tactic. The deck can easily thin out and make early game aggressive pushes. Not even the best deck can stop one of these early game rushes anymore. With the right ratio of grade 2 units against grade 1 units, it is very simple to set up the perfect field and slowly erode your opponent’s hand, until they are unable to stop attacks and are left defensively playing at five damage.
Now more than ever it is easy to seamlessly intertwine both Legions and mates into a primarily STRIDE heavy deck. Legion has found a comfortable spot in Gear Chronicle and both units fit just fine into any strong build. Most importantly, the best part about this Clan is that the main character in the show uses it, so we can be 100% certain that there will be more support for it in the near future. In fact recently images were released for Generation Booster 4 (GB04) showing a new form of Chronojet Dragon named Chrono Dragon Nextage . 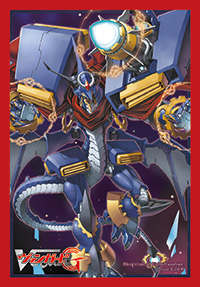 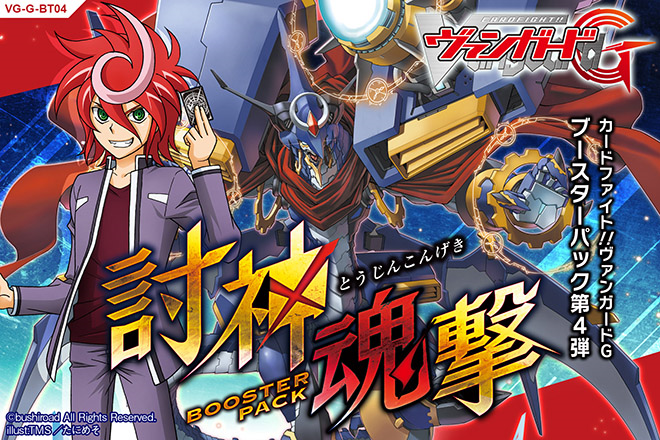 While it is still too early to know its effect we have our first look into the future of this Clan. With it being such an integral part of the show, we can expect more support in future sets. For the moment, since there haven’t been any noteworthy tops in large events, this clan is honestly underestimated, under hyped, and underrated.

That’s all I’ve got for my fellow Cardfighters, so until next time, I’m Scotch Janesek keep on keeping on and as always… Remember to stand before you draw!