Get Ready to Booster Brawl!

You are here: Home / Get Ready to Booster Brawl!
Categories: Bobby Brake, Kaijudo
by Bobby Brake

Winter Championship back in November. This product gives us 8 packs (2 Dojo Edition, 2 Rise of the Duel Masters, 2 Clash of the Duel Masters, and 2 Shattered Alliances) and 3 exclusive new promo cards that you can use when you brawl. It is an exciting new way to play the game of Kaijudo, adding more skill and fun into the mix. For those who do not know how to play here is a quick list of how.

Introducing the “veil” into Kaijudo is where the new level of skill will be put to the test. When picking from the veil you have to ask yourself many different questions before deciding which card would be the right one to choose. For example, what civilizations do I have unlocked? What cards have my opponent picked already? What could my opponent use against me in the future? and others similar to those. When picking from the veil you cannot only consider what will help you, but what might help your opponent. So maybe the best option is taking a card that will not be that helpful to you but you have now prevented your opponent from getting a card that may turn the game in their favor eventually. You have to keep the past and future in mind when playing Booster Brawl. It can be the most fun and brain bending game. Booster Brawl is great for the casual and competitive player. Now that we went over some of the basics let’s take a look at the 3 exclusive promo cards!

I do not see this card seeing much play in the competitive scene, but is a dragon so people might try to tech it in a Dragon 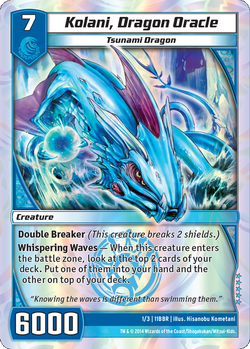 deck. However in Booster Brawl, this card is amazing. At 7 for 6000 it is a nice body you can put on the board to apply pressure to your opponent. Its Whispering Waves ability is where this card will really shine. When it enters the battle zone, you look at the top 2 cards of your deck and put 1 in your hand and the other back on top of the deck. Cards that have abilities like this give great knowledge in Booster Brawl. You will now know both cards your opponent is getting next turn, one from the veil and one from drawing the card you put at the top of the deck. I love using cards like this and Logos Lookout when I played people in Booster Brawl at the Winter Championship. 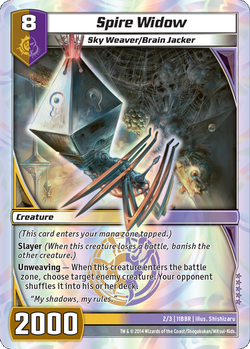 is pretty weak. It is a slayer though so the power level is sort of irrelevant. Its Unweaving ability is the first of its kind in Kaijudo. When it enters the battle zone, choose target enemy creature and your opponent shuffles it into their deck. Shuffling a creature as oppose to banishing it gets around a lot of other creatures abilities. Any creature that has an effect that would trigger when its banished, like [ccProd]Gregoria’s Fortress[/ccProd] or [ccProd]Fullmetal Lemon[/ccProd] would not activate when you put them back in the deck. It is also one of the only creatures that can outright remove a creature from the field when it is summoned. Spire Widow will definitely need some testing but I would not be surprised if this card found its way into some control decks. Another note is that we got previewed a card from 5 Mystics called Swift Regeneration and it says until the start of your next turn your creatures cannot be banished. Spire Widow gets around that ability by putting the creature back into the deck instead of banishing them.

This is my favorite of the 3 cards. He is a great aggressive card. His Rousing Bellow ability says when he enters the battle 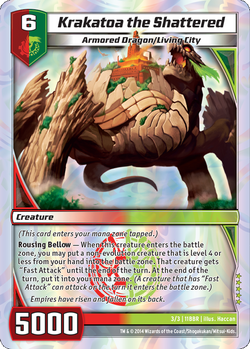 zone you can play a creature level 4 or less from your hand into the battle zone. That creature gets fast attack and goes into your mana zone at the end of the turn. This card has a lot of potential for some fun combos. You not only get the ability to fast attack with a creature, but mana ramp afterwards. This card will work best with level 4 or less creatures that have an enter the battle zone ability. The first combo I thought of was using the new Psychic Predator Rusulka from 5 Mystics. If you are able to use it then you can prevent two creatures from blocking or attacking until the start of your next turn and fast attack with it. This card will only get better with more testing but I expect to see this at KMC’s.

Booster Brawl is a new fresh way to play Kaijudo and is fun for all levels of skill. I have been waiting a long time for this to come out and will definitely pick up 3 of them to play with people. I am having a Championship party at Comic Asylum in Richardson Texas this Sunday and I am going to try to play as many people in Booster Brawl as I can. Remember is not all about winning, but having fun! There's a 1K in 1 Day in Akron this weekend February 22nd! Click the pic below for details!