How Good is Good?

Hello Duelists! This week I’d like to discuss a card that is run at 3 in almost every deck this format and the impact is has on the game, good and bad. Vanity's Emptiness. 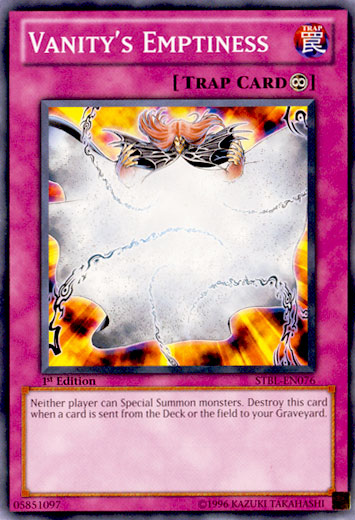 A decision tree, at the most basic level, is simply a list of possible outcomes, and their associated probabilities. Let me give you an example of a non-interactive decision tree.

You have a goal, which is to buy some food from a supermarket. At the moment, you are sitting in your room, reading an ARG article. You have two options available to you:
1) Get up from your computer and go to the supermarket immediately (95% chance of success in original goal)
2) Continue reading ARG article (70% chance of success in original goal)
Clearly the correct option is option 1. Applying this to Yugioh, we have the end goal of winning the current duel, and our list of decisions consist of any possible combination we in which we could play our cards. You should strive to choose the combination with the greatest probability of winning you the duel.

A recurring problem in the game of Yugioh is when a card can single-handedly eliminate decision trees for your opponent if they don't immediately draw an out to it. Most of the cards that do this are "floodgates" such as Dimensional Fissure, Macro Cosmos, Skill Drain, etc. But the card that is most relevant today is Vanity's Emptiness. Mained as a 3-of in almost every deck, this card does an amazing job of eliminating decision trees for your opponent pretty quickly.
Skill in Yugioh is largely a function of being able to navigate decision trees properly (being able make proper decisions based on your current resources and your reads on your opponent’s cards). The problem with Vanity's Emptiness is that not only does it drastically reduce your opponent’s decision trees, but it also reduces your own by having you just keep Vanity's Emptiness on the field and hold your cards. So it drastically reduces the influence skill has on playing and narrows it down to "Did my opponent draw one of their few outs?"

The more powerful the monsters the harder What this means in practice is that the distortion that Vanity’s Emptiness introduces into the game scales up drastically as turn 1 setups and monsters in general get stronger. If you’re facing down a Shaddoll Beast – normally not a serious threat – but your opponent has flipped Vanity’s Emptiness, not only has your opponent likely gotten value out of that initial activation, but now you have to out a 2200 Attack monster without Special Summoning. And not only do you have to remove it from the field, but you have to send it to the grave to actually get rid of Emptiness on your own terms, instead of letting your opponent do it whenever is convenient for them.
This becomes even more absurd when you have cards that can protect Emptiness from destruction, using cards like Stardust Spark Dragon and Master Key Beetle. Not only can both cards protect themselves, protecting Emptiness indirectly, but if you manage to out them through something like a set Shaddoll Dragon or Dimensional Prison, you still have to deal with Emptiness and whatever the rest of the board your opponent has established. Meanwhile, you’ve been setting monsters to protect your life points and your opponent has been steadily accumulating resouces. Another very threatening card is Black Luster Soldier- Envoy of the Beginning as they can just banish the monster that you set every turn so you can't even out their field with cards like Ryko, Shaddoll Squamata, etc. or be able to draw more cards off of cards that let you draw a card when destroyed battle such as Mathematician. Eventually you will run out of monsters to set and they'll have plenty of cards in their hand and you're probably going to lose all your life points. This reality of " Did I draw one of my few outs, No? Well I hope my opponent shuts off their Vanity's Emptiness or else I'm in trouble." Is not very healthy for the game.

A common mistake that I see people making is setting a Vanity’s Emptiness on their first turn without knowing what they’re playing against. In general, your opponent will have more ways to clear Emptiness off the board early in the game, and there aren’t too many threatening turn 1 plays that you could have stopped anyways (apart from perhaps Tour Guide in Burning Abyss).
More concretely, Lightsworn Shaddolls could easily just summon Lyla and poke for 1700, pop Vanity, and then mill 3. Meanwhile, you’ve gained absolutely nothing. Regular Shaddolls might send Dragon to the grave by using Mathematician or Armageddon Knight.
Vanity's Emptiness thrives in simplified game states so holding it until your opponent is low on cards will reduce the amount of outs your opponent has, will turn the game greatly in your favor.

Don't just shut it off

Another common mistake is shutting off Vanity’s Emptiness during your next turn, under the reasoning that you’ve “already gained value” from it. This is simply the Sunk Cost fallacy, inverted. What matters is not what the card has done for you in the past, but what it will do for you in the future. If you can gain more value by shutting it off – to kill your opponent this turn, or to set up an unbreakable board – then you should do so. But oftentimes this format, you will gain more value simply by sitting on Emptiness and reducing your opponent’s cards – or life points – to zero, one turn at a time. Judge each situation separately and decide which option will give you the best chance of winning. This format is relatively slow so odds are your opponent won't be able to reduce your life points from 8000-0 in a single turn.

In the end, it is clear that Vanity’s Emptiness, like all floodgates, represents a serious problem in game design. If a format supports playing it, then it reduces the playability in the game drastically. If a format does not support playing it, then it is useless. While the underlying problems are deeper than just this, Vanity’s Emptiness is a problem, and it needs to go.

That's all for this week's article! If you'd like to see me write about a certain topic feel free to message me on Facebook. The Circuit Series stops by Colombus, Ohio next on October 11-12th I hope to see you all there.