This weekend I attended an Invasion Earth Set Premiere. Set premieres are always very interesting and fun because we are given 5 packs and we have to build a deck from them. I like it because everyone is on an equal playing field for the most part. The aspect of this event I enjoyed the most was using the new Corrupted Creatures. There are a lot of them in the set so many people built their decks around them and were able to see how they worked for the first time. 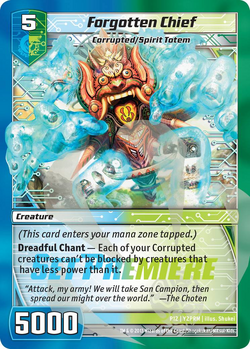 Skraven, Draconic Reaper and Forgotten Chief. I chose to get Skraven. He is the better promo in my opinion because he is all around more playable. He is a 7000 protector and when he wins a battle, you can get a creature from your discard pile and put it in your hand. On top of all that he is also a Shadow Champion/Armored Dragon. The best way I can see to utilize this card is in a Dragon deck with Hyperspeed Dragon and some Fire Birds. That way you can give him Fast Attack and help his chances of using his ability. He is powerful with the Fire Birds because you can feel free to attack with them while having him out to protect them when your opponent tries to attack over the birds. The next promo is Forgotten Chief, I guess they forgot they made Vicious Squillace Scourge when designing this card. When you look at it by itself it is not that bad of a card. It has a solid 5 for 5000 body and all of your Corrupted Creatures can’t be blocked by creatures that have less power than it. But when you compare it to Vicious, I do not really see a reason why you would use Chief over Vicious. So I guess if you are going to use a Corrupted deck that has nature but no darkness then you might want to play him, but outside that I do not think this card will see any play.

Now I am going to go through and show the Civilization ratios I had to choose from to determine how many civs I was going to build my deck with.

This is the only problem I have with this Set Premiere. Because of the high mutli-civ count you do not have the luxury of choosing what civilizations you want to use. I was only given 17 mono-civ cards so if I wanted my deck to be somewhat consistent at not opening up or drawing a  multi-civ every turn I had to use all 5 civilizations. Instead of having the mind set of what cards to use I had to go through and just pick what cards not to use and was forced to use other cards just for the civ count. I was laughing the whole time because it was difficult trying to find the right balance of cards to use. I think the butter was just spread way to thin in this set for sealed play. I think drafting this set might be better, but when it comes to playing sealed it is very difficult.

Here is the deck I ended up going with

When I pulled Seneschal, Choten’s Lieutenant, I counted how many other Corrupted creatures I pulled. I got 11 total, including 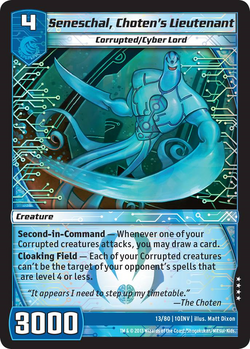 the Seneschal. So right then I knew I was going to try to focus the deck around these Corrupted creatures. I won many of my games using Blitz Commando and Seneschal. I was able to play Blitz Commando on turn 3, then Seneschal turn 4, and then turn 5 I would play and Essence Shade or 2 Bronze-Arm Renegades and just proceed to win quickly. Playing this set in sealed was more fun than it first appeared. All the cards seemed to work together with good synergy. There were also a good number of shield blasts to use, I was able to use 5 and they worked often.

Other cards that worked really well in sealed were Blastforge Marauder, Victory Gunner, and Arc Ward. Blastforge Marauder won me like 3 games because I was so aggressive I would just throw this guy down on turn 6 and win. One of my opponents used Ricochet Shot and banished him, which was pretty nifty. Victory Gunner was great, I only had 3 bait for him but most of the time my opponent was focused on dealing with other threats and I would play him and either break two shields or banish two creatures while ramping at the same time. Arc Ward is probably my favorite card in sealed, if you have decent size creature in the Battle Zone you can use it on him and be aggressive and defense at the same time. In one game I was able to combine it with Haven’s Elite back to back while my opponent just sat there and could 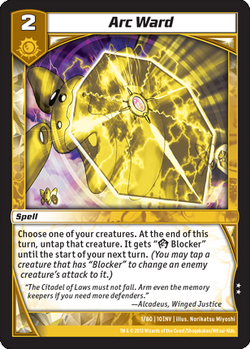 One game mechanic I thought was going to be good in sealed was Protectors, but sadly they did not do anything for anyone. Most of the time, they just sat in the battle zone. People were just attacking shields and not really caring about creatures that much.

I ended up getting 2nd place and had a great time. If you have never played in a Set Premiere I would encourage you to play at the next one you can. It is great for any type of player, beginner, casual, or competitive. Let me know if you played in one this past weekend and how it went! Also! Don't forget about the Circuit Series in Worcester, MA this upcoming weekend (November 16-17)! Good luck!