Hello Kaijudo fans this is Nathan Bond here to talk to you about cards changing a format.  I am familiar with a lot of the changes in deck styles as they play from where I play.  I play in tournaments with CVH, Earthpower, Carl, Matt Segura, Pogiforce, and the rest of the competitors up at Comic Kings.  There I have seen decks such as Blurple, Saber-bolt, Cobalt Control, and WDF Control all do well, along with many others.  You can see me playing in some of their videos along with my own videos.  Now for what I wish to discuss, cards that have changed the game and how upcoming cards can do the same.

Lets start with Blurple, a solid deck that even now is still hard to beat.  Many cards made this deck as good as it is but the cards that gave such great advantages were Emperor Neuron and Hydra Medusa.  This deck has a very aggressive early game with Emperor Neuron taking shields without being able to be blocked and drawing cards for the person.  If Blurple goes first, the player will get one shield on turn 3 from him and probably another on turn 4 before your opponent has any answer for him.  Also should the opponent summon a monster that can get rid of Emperor Neuron as long as the Blurple player plays a chimera on turn 4 or already has one in play by the end of that turn, then on turn 5 all the deck has to do to keep the aggression up is play a Hydra Medusa and use its ability to kill the creature that killed Emperor Neuron or that would have the ability to do so in the next turn so that you can continue to attack freely.  These cards made game play very different, and it doesn't matter how you build your deck Emperor Neuron in just a force that is hard to deal with.  The synergy that lies in this deck makes it such a challenge to play against.  As time went on there were decks that did start to play better and be very effective against Blurple, Saber-bolt being one of those decks.  Here below I have both Hydra Medusa and Emperor Neuron. 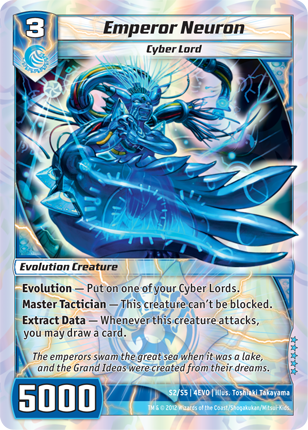 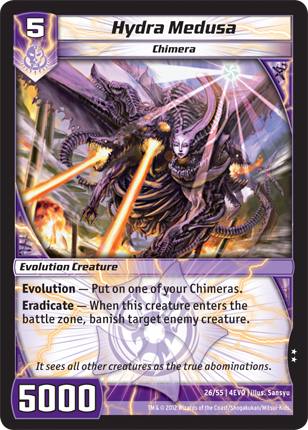 From Blurple there came the rise of a deck known as Saber-bolt.  This deck came in two variations a Water Fire Nature version that became known as Aqua Saber-bolt, and a Dark Fire Nature version that claimed the title Dark Saber-bolt.  This deck in both variations ran one key thing that made it so good and that was what is known as the Beastkin Engine.  This is a set of cards all of which that are beastkin that work extremely well together.   It starts with Prickleback for that early aggression, then there is Razorhide, and finished off with Bronze-Arm Tribe.  The later two give the deck mana acceleration, and Razorhide gives that acceleration while keeping aggression up.  Now for the key card in the group of card, the one that ties it all together and that is Bronze-Arm Sabertooth.  Bronze-Arm Sabertooth is a very aggressive evolution who is strong enough to kill most of the popular early evolutions early on.  He also allows the deck to have a double breaking creature as early as turn 4.  This is a card your opponent has to deal with but the key problem here is if Bronze-Arm Sabertooth would be banished he goes to mana.  That one ability allows the deck to jump up 2 additional mana, and puts it so much closer to playing the second key card of the deck.  That second key card would be Bolt-Tail Dragon.  Bolt-Tail Dragon being an 8 cost 7000 power double breaker with fast attack, it becomes such a deadly card.  When this is combined with the fact that the deck generally plays a play set of Gilaflame the Assaulter, and some builds played Flamespike Tatsurion as a one of, that gives the deck a total of 9 to possibly 10 fast attackers in the deck.  This deck is so aggressive that at anytime a person could think they are safe but that is immediately turned around by a single play.  Then when you look at the two variations of the deck they each played their own slew of cards that a player has to watch out for.  In an Aqua Saber-bolt deck it is easy for someone to add in Emperor Neuron as an added threat.  Dark Saber-bolt plays a lot of control cards like Skull Shatter to support its aggression.  This deck became a very popular deck fast not only for its effectiveness but also in its simplicity and how easy it is to build.  Of all the major meta decks I have seen, in my honest opinion I believe any version of Saber-bolt is the cheapest thing a player can make.  So now to showcase the two popular cards of the deck. 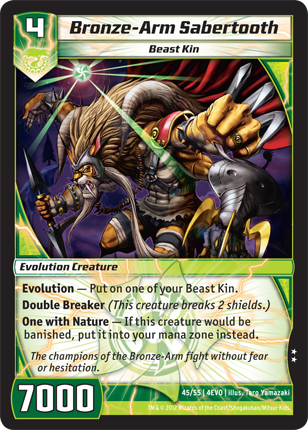 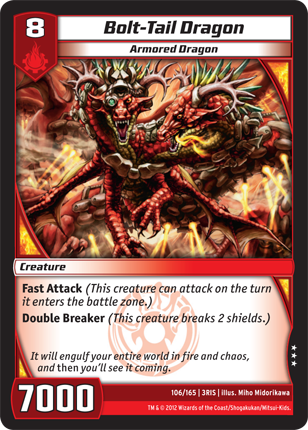 As Saber-bolt became more popular a new deck came on a rise to the scene.  This deck is called Cobalt Control, traditionally a Water Dark Light deck, though it is possible to play in any other combination.  This deck had two main advantages when it came to fighting against a Saber-bolt deck, first being it had access to blockers that the Saber-bolt deck just can not handle fighting against like Grand Gure.  The second was the ability to generate new shields to benefit the deck.  Grand Gure became one of the key cards in the deck not because he does something special but because he is a decent mana cost and high enough power that a traditional Saber-bolt deck has no ability to swing over him.  Cobalt on the other hand gave that deck its important aggression and at the same time a new shield that could possibly be a blast.  The last special thing it plays is a single Halon, Paragon of Light.  This evolution creature is the only thing light has that can attack the turn it comes out and has the power needed to kill a Bronze-Arm Sabertooth or a Bolt-Tail Dragon.  Here are the cards that make that deck so effective. 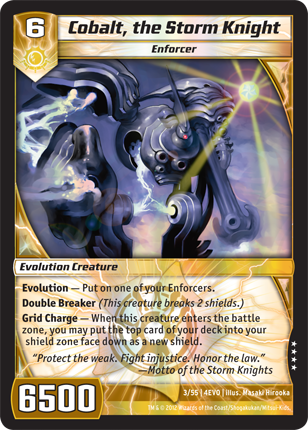 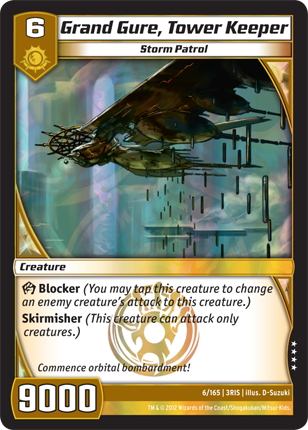 These decks all have one thing in common the key cards in the decks themselves changed the way the game was played.  This is important to keep in mind as we move forward, not because we all want to know what the next big thing is but because we can expect these cards to appear before people have a chance to play them.  A good thing to watch out for would be all of the fire birds.  Each of these reducing the cost of dragons in general and a few really good abilities.  These will change the game play not from their own effects but because there will be dragon decks now and making all their dragon cards cheaper to play makes people able to play many cards they would never have considered playing before because the cost was two high.  Not only will the fire birds change it but so will all of the big dragons, these all cost 9 to cast and have power levels ranging from 11500 to 13000.  All of them have an ability that makes them extremely good from killing creatures to summoning them for free.  This pack will give us some interesting cards for organized play.  I look forward to seeing you all out their playing making these new cards your own so duel on Kaijudo fans.

The Things to Come: The Impact of Set 5
Top 8 Regional Report
Our Contributors