The 2014 Kaijudo Summer Championship is this weekend! Championships are the highest tournament level in Kaijudo organized play and there are only two every year. Duelists are going to have to make every move count because you do not get that many chances to win an event like this. Quest for the Gauntlet came out less than 2 weeks ago, which is a short amount of time to find the right deck to use for the tournament, but that what can make it just as exciting as it does stressful. The first 3 rounds of the tournament will also be done in the new draft format, a whole other skill in itself. As important as the tournament is though, the Championship is much more than that. It is an awesome experience and just being there and being able to take part in all that there is to do is the real prize. I am going to talk about what all there is to do besides the actual tournament; this is why I always look forward to going every time.

Side events are 8 person tournaments that are run all day throughout the weekend. Each of them fire off as soon as 8 people 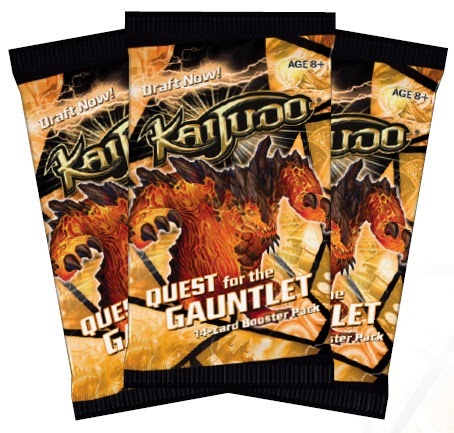 sign up for the event. They will be having sealed, draft, and constructed tournaments. Something different they are doing this time around is having these events on Friday, so all the qualified players can do some extra practicing if they need. At the last Championship, I was not quite sure about all the card choices for the deck I was going to use, so I played in an 8 person constructed tournament and won it. That amount of practice help me verify what I needed to use and help me win the Championship the next day. Personally, I will be drafting a lot on Friday. Drafting is so much fun and it is also can be used as practice for the first 3 rounds of the tournament. I think this will be the most popular side event of the tournament just because is something new and challenging.

Members of the Kaijudo R&D team will be doing a panel on Friday at 4:00 where they will answer questions about anything Kaijudo related really. Each panel is always unique and insightful for the players. They share some of the secrets of what goes behind the scenes. It is easy to open packs and play with the cards you are given, but you never really think about how much work goes into designing every card and why certain ones were made. R&D is pretty open about most things and sometimes gives little hints to what the future of Kaijudo looks like. Being able to ask questions and interact with the people who make Kaijudo is an awesome privilege and is open to anyone for just being there.

The artists are the one thing I am most excited about at this Championship. They are having Jesper Ejsing and Daisuke Izuka this time around. Jesper is probably my favorite Kaijudo artist. He is most known for the artwork for all of the Monarchs. They are the first full art cards in Kaijudo and can be argued as the most powerful. He has also done others like [ccProd]Razorkinder Puppet[/ccProd] and [ccProd]Megaria, the Deceiver[/ccProd]. What I like most about his style is how realistic the creatures look. Daisuke is known for the artwork of [ccProd]Tatsurion the Unchained[/ccProd], [ccProd]Scaradorable of Gloom Hollow[/ccProd], and [ccProd]Reef Prince Glu-urgle[/ccProd]. Those are the main creatures in the Kaijudo universe so his artwork laid the foundation for the game. The most recent card he did is [ccProd]Underworld Stalker[/ccProd] from Quest for the Gauntlet. Both of these artists have had a great impact on the game and their pieces of art are admired by everyone who plays, it is going to be a great honor meeting these people, having them sign cards, and possibly buying artwork from them.

This is a tournament that is held on Sunday for anyone who wants to play in it. This time it is going to be a sealed event with a top 8 draft, I believe. You also receive a Snow Fort promo card just by playing in this event. I like that they decided to go with sealed because that will put everyone on an equal playing field. You can also win up to 24 packs of Quest for the Gauntlet. It is a fun event that people can look forward to playing in even if they didn’t qualify for the Championship.

The Prize Wall is an awesome addition they made to the event that is a way for players to win exclusive stuff. Throughout the weekend, whenever you win packs in an event, you earn 1000 points for each pack won. You can use those points at the Prize Wall to get awesome things. Last time they had giant cards, uncut sheets, artwork, packs, pins, DVD’s, shirts, patches, playmats, and more. This gives people additional stuff for participating in either the Championship or the Community Tournament; it also encourages people to play in Side Events. I cannot wait to see what will be on the wall this time!

These are just a few of the things you can do this weekend besides participating in the actual Championship Tournament. I am sure there will also be surprises from WotC that are going to excite a lot of people because that is what they love to do. This is going to be a great weekend full of fun and just enjoying Kaijudo. These Championships are the best card game events I ever go to. I am going to attend everyone I am able to, even if I am not qualified for one because of how awesome it really is. You can find all the details about this weekend here, http://www.kaijudo.com/blog/events/summer-championship-update. Remember it is not all about winning, but having fun!

The Circuit Series comes to Milwaukee, Wisconsin this weekend on June 14-15, 2014! Click the picture of the dragon below for all the details!

Quest for the Flavor Text
Check back soon for ARGCS Philly Coverage!
Our Contributors