When deckbuilding, many players struggle in deciding what cards to use in their decks and what cards to cut. There are many factors that go into these decisions, such as playtesting, consistency, theory, statistics, etc. I'll be discussing some of them today.

This past weekend at the ARGCS 20k, Geargia variants took the event by storm, taking 5 spots in the top 32! Even after the ban list put Geargiagear down to one they still managed to adapt. The weirdest part of it all, most Geargia lists didn't even use Geargiagear! WHAT?! No Geargiagear?! With the new ban list in effect players decided that playing multiple Geargiano MK-II would only lead to bad hands in the early game, rendering the card a sub-optimal choice and leading to the decision to cut Geargiagear all-together. But what players chose to keep was a Geargiano, due to the fact that it turns Gear Gigant X into an incredible floating machine. Not convinced that running Geargiano MK-II is incorrect? Maybe these numbers will change your mind. Let's say that you win the die roll and you opt to go 1st: the chances of you opening at least 2 MK-II or a MK-II and a Geargiano in your opening 5 card hand are 8.5%. If you go 2nd then the chances increase to 11.5% in a 6 card hand. What this means is that, assuming you go into game 3 every match, 26% of your matches where you go 1st game 1 you will open with a combination of two or more Geargiano monsters, and if you go second these odds increase to 28.4%. Opening multiple Geargiano monsters is backbreaking, especially starting with 5 card hands, since rank 3s aren't often able to generate advantage independently of the rank 4 engine. 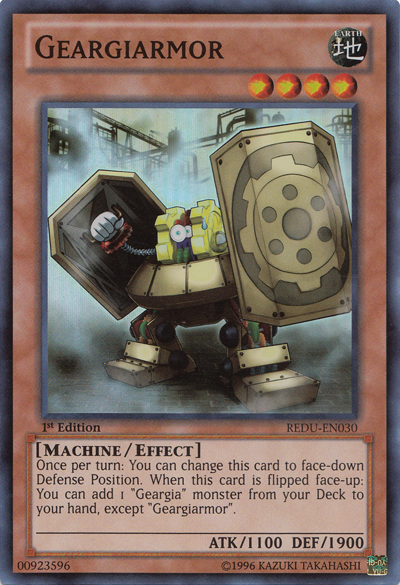 Another reason to cut MK-II is that playing him necessitates the use of rank 3s. If you're not using rank 3's, you now have space to use more game changing rank 4's that you may not have had room to use before such as Number 82: Heartland Draco, Number 50: Blackship of corn or even Number 39: Utopia (Like Dalton Bousman (Top 8) and Tyree Tinsley (Top 16) chose to do at the ARG 20k! . There's no reason to limit your extra deck space when you can drop the problem entirely.

The problem that Gears have is their slow opening - when you don't open Geargiarmor or Geargiarsenal you're very far behind. So how did Gear players solve that problem this weekend? They used cards like Cardcar D to help push through the early game to see their essential engine, and Artifact Sanctum and Moralltach to allow them to play the game even without seeing Geargiarmor or Geargiarsenal. 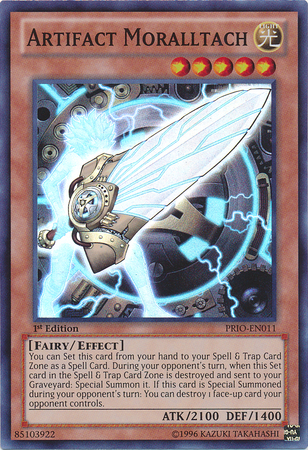 The Artifact cards serve an even greater purpose than that, however. Let's say you have a Geargiarmor set and you open an Artifact Sanctum, and your opponent knows you're using Geargia. There aren't many monsters in the current metagame that can get over Geargiarmor's high defense of 1900 so your opponent will usually have to make an XYZ monster to attack over your Geargiarmor. And if that XYZ monster isn't a Number 101 then you can activate Artifact Sanctum to special summon a Moralltach and destroy the XYZ monster. Now your opponent has lost significant card advantage and tempo, and meanwhile you have a set Geargiarmor and a Moralltach already in play.

Yes, opening multiple Moralltachs is quite unfortunate, but it isn't completely dead because if you play Mystical Space Typhoons, if needed you can hit your own Moralltach during your opponent's turn and special summon it and destroy one of their cards. If anybody actually thinks they'll be opening 2 Moralltachs very often they're quite mistaken, the odds of opening both Moralltachs when going first are 1.5% and 2.3% if going 2nd, so it's not likely to happen more than once in a long tournament, if at all. There are way more pros to playing Sanctum than there are cons to opening Moralltach. The chances of opening a Moralltach and a Mystical Space Typhoon are between 6% and 12% depending on your ratios and whether you're going first or second, so you'll occasionally be able to get some value out of drawn Moralltachs as well, beyond their function as weak tribute monsters. Additionally, your opponent will quite often try to clear a set armor and some backrow by going into Evilswarm Exciton Knight. While this can often swing a game around, having a set Moralltach will turn the tables on your opponent, clearing the Exciton and usually leaving you with the Moralltach on board to make plays.

The card that I think was a mistake this weekend was Cardcar D. Let's consider a playable hand one in which you open Geargiarmor/Geargiarsenal/Artifact Sanctum. You have a 77.5% chance of opening with one of those 9 in your opening hand when going 1st and a 83.8% chance when going 2nd. Now let's say you didn't open any of those cards in your opening hand - but wait! You opened one of 2 Cardcar D to dig for those cards! The odds of Cardcar D grabbing you one of those cards increases from 77.5% to 81.1% when going 1st. And when you go 2nd, the chances go from 83.8% to 87%. 3.6% and 3.2% are not huge increases in consistency, especially considering you don't get to use any of those cards turn 1, which is very important for Gears. Those numbers account for seeing 3 new cards because you will draw a card for turn during your draw phase. I think the slots that Cardcar D filled up could have been better used for other things. Cardcar D becomes better in the late game attrition-war and during simplified game states. Cardcar D also has some niche value when you're flip-flopping Geargiarmor, allowing you to search Geargiaccelerator and still giving your normal summon value, now you can summon Cardcar D, and if your opponent doesn't have Torrential Tribute, you've raced miles ahead in just one turn. All that said, more trap cards or better standalone monsters that create board presence probably would have been a better choice for fixing this deck's flaws. 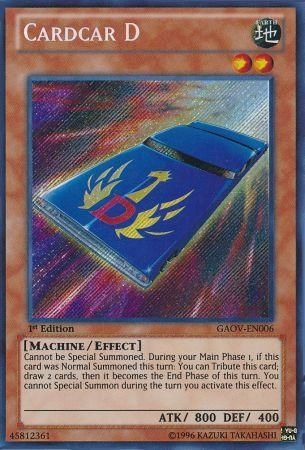 I want to thank Robert M. for helping me with the statistics. All of the statistics assume a 37 card deck as you should definitely be running Upstart Goblin in this deck (and, frankly, in almost every other deck for that matter, excluding maybe chain burn). There has been a rumor floating around, which says that a deck running Upstart Goblin can't be considered a 37-card deck for statistical purposes. There's a saying: “Upstart isn’t a card.” While not strictly true, it is an accurate representation of what happens when you consider Upstart in the context of opening hands. Since you’re going to be firing it off immediately, there’s no difference in odds between a 40-card deck with 3 Upstarts and a 37-card deck in the same order without the Upstarts. There’s also a proof by induction on positive integers, but I’ll leave that to the curious to dig up for themselves.

That's all for this article duelists! The next Circuit Series is in Providence, Rhode Island on August 9-10th. For more information click here: http://articles.alterealitygames.com/event/circuit-series-providence-ri-august-9-10-2014/