Lock and the Invasion of Link Joker

You are here: Home / Lock and the Invasion of Link Joker
Categories: Cardfight Vanguard
by Randy Chen

Hey Cardfighters! My name is Randy Chen. You might’ve seen me around the North American Cardfight Vanguard Facebook page occasionally. If not, then good. I usually end up trolling anyways. But this article won’t be a troll article. It’s all serious business from here on out.

I would consider myself an average cardfighter. I’ve been playing the game since Spring of 2012 which is basically when set 6 launched in America and everyone was introduced to the mechanic (new at the time) of Limit Break. I would like to take the time in this article to look ahead to a new mechanic arriving in the near future in Set 12. You might’ve guessed it already but I am here to talk about the “Lock” mechanic and its impact on the meta and just the game in general.

To begin with, for those who do not know what “Lock” is, it is introduced in Booster Set 12: Binding Force of the Black Rings and Trial Deck 11: Star-Vader Invasion which should be coming in the near future to the States. It is mainly used by the newly introduced clan “Link Joker” who are, in the story, the envoys of the villain Void. They are able to manipulate this mysterious power of Lock in order to “Reverse” various units in various clans and corrupt them with the power of Void. Some units that are not part of the Link Joker clan that are able to use Lock from Set 12 include Eradicator, Vowing Saber Dragon “Reverse”, Demon Marquis, Amon “Reverse”, and Silver Thorn Dragon Queen, Luquier  “Reverse.”  Now what is Lock? Lock is a mechanic of some skills to turn either an ally rearguard unit or an enemy rearguard unit facedown. This Lock lasts until the end of the player’s turn. So if you Lock an enemy’s unit, it does not “unlock” until the end of their turn. This is significant because, while Locked, that unit cannot do anything. This includes not being able to be retired, attack, intercept, use its skill, letting another unit use a skill that would affect that unit, or letting the player replace that unit with another one. To make a comparison, this is much like a stronger version of Megacolony’s skills of not letting their opponent’s units stand during their Stand Phase. 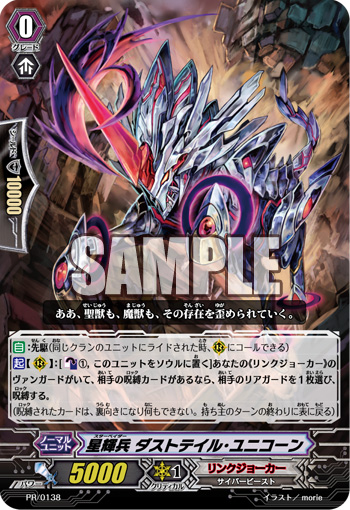 [AUTO]: Forerunner (When a unit of the same clanrides this unit, you may call this unit to (RC))
[ACT](RC):[Counter Blast (1) & Put this unit into your soul] If you have a «Link Joker» vanguard, and your opponent has a locked card, you may pay the cost. If you do, choose one of your opponent's rear-guards, and lockit.
(Locked cards are turned face down, and cannot do anything. Turn them face up at the end of its owner's turn)

[AUTO](VC): When this unit's attack hits a vanguard, choose one of your opponent's rear-guards, and lock it.
(Locked cards are turned face down, and cannot do anything. Turn them face up at the end of its owner's turn) 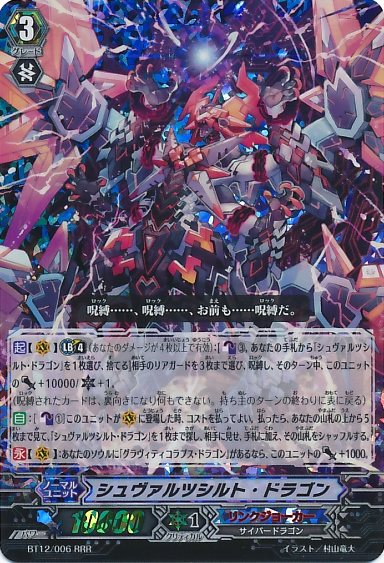 [ACT] (VC) Limit Break 4 (This ability is active if you have four or more damage):[Counter Blast (3) & Choose a card named "Schwarzschild Dragon" from your hand, and discard it] Choose up to three of your opponent's rear-guards, lock them, and this unit gets [Power]+10000/[Critical]+1 until end of turn.
(Locked cards are turned face down, and cannot do anything. Turn them face up at the end of its owner's turn)
[AUTO]:[Counter Blast (1)] When this unit is placed on (VC), you may pay the cost. If you do, look at up to five cards from the top of your deck, search for up to one card named "Schwarzschild Dragon" from among them, reveal it to your opponent, put it into your hand, and shuffle your deck.
[CONT](VC):If you have a card named "Gravity Collapse Dragon" in your soul, this unit gets [Power]+1000. 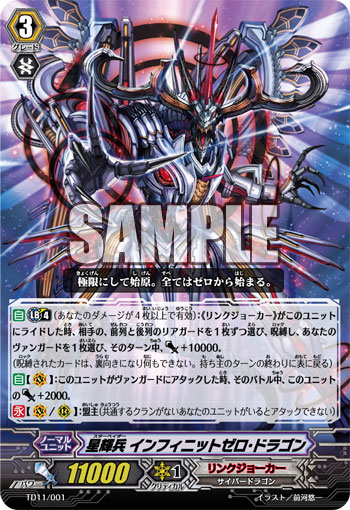 [AUTO] Limit Break 4 (This ability is active if you have four or more damage):When a «Link Joker» rides this unit, choose one of your opponent's rear-guards in the front row and back row, lock them, and choose your vanguard, and that unit gets [Power]+10000 until end of turn.
(Locked cards are turned face down, and cannot do anything. Turn them face up at the end of its owner's turn)
[AUTO](VC):When this unit attacks a vanguard, this unit gets [Power]+2000 until end of that battle.
[CONT](VC/RC): Lord (If you have a unit without a sameclan as this unit, this unit cannot attack) 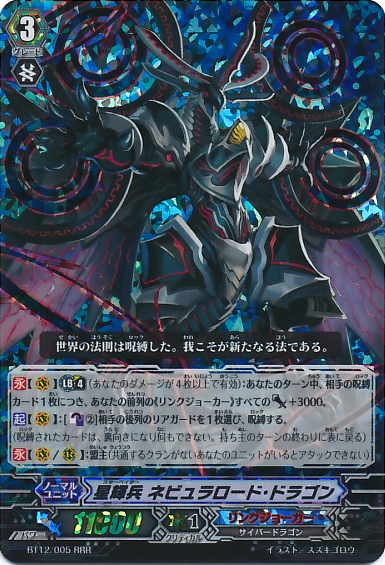 [CONT](VC) Limit Break 4 (This ability is active if you have four or more damage): During your turn, all of your «Link Joker» in your front row get [Power]+3000 for each of your opponent's locked units.
[ACT](VC):[Counter Blast (2)] Choose one of your opponent's rear-guards in the back row, and lock it.
(Locked cards are turned face down, and cannot do anything. Turn them face up at the end of its owner's turn)
[CONT](VC/RC): Lord (If you have a unit without a sameclan as this unit, this unit cannot attack)

So to begin with, we have “Star-Vader, Dust Tail Unicorn.” Right off the bat, we have the starting vanguard that is able to Lock units. It works like this. If your opponent has a Locked unit already, you can pay 1 counterblast and put the unit into the soul to lock another unit of your choice on their side of the field. I will stress the “ANY UNIT” part because you can use this unit to lock down a backrow rearguard to stop it from being able to boost, or even a frontrow rearguard to stop attacks altogether. This is one of the most powerful starting Vanguards to ever be made with the ability to stop attacks altogether albeit requiring some setup.

Next we have “Star-Vader, Mobius Breath Dragon.” This unit is able to Lock any unit as well, however, is restricted by only being able to activate when it is the current Vanguard and when its attack hits the opposing Vanguard. However powerful this skill may be at first, it is restricted to, in usual conditions, the one turn you ride to grade 2. After you ride to grade 2, all copies of this card in your deck become vanilla 9k grade 2s. This is obviously not ideal for a deck where you want to maximize the conditions when you can pressure your opponent and get them to 6 damage. On the upside, this skill itself, if you are able to use it, is very powerful in that you are able to lock off a potential boost for next turn or even another attack for the next turn.

“Schwarzchild Dragon” is the odd one out in the 5 units because it is the only one that is not part of the “Star-Vader” archetype. So it is comparatively worse than the rest of the units because it is not able to receive the same support as the rest of these units. On the upside, however, it is able to lock more units than everything else in the field at a whopping 3 units as well as being able to gain 10000 power as well as a critical. So basically, it attains massive power and cripples your opponent through 3 counterblast as well as a persona blast. It is also able to consistently do this through being able to counterblast 1 when its ridden to search for another one of itself from the top 5 cards of your deck. So it essentially fuels itself if possible. However, as I said earlier, it does not gain any benefit from not being part of the “Star-Vader” sub-clan so it is viewed as lacking compared to the rest.

Now this is where the locks get interesting. The next one is “Star-Vader, Infinite Zero Dragon.” This guy is the Link Joker’s Break Ride. When you ride over it with another Link Joker unit, that unit gains +10000 power and you also get to lock an opponent’s unit in the front row and in the back row. Basically, this guy allows you to lock 2 of your opponent’s units for basically free. Now you may say, “But it’s only for a turn and you have no real way to capitalize on that besides just making their attacks underpowered or nonexistent.” But therein lies the strategy. Link Joker is a defensive clan. Being able to reduce attacks or even not allow your opponent to attack at you once is a large defensive boost. Now being able to capitalize on this requires you to ride the next guy and go on the offensive.

“Star-Vader, Nebula Lord Dragon” is the real deal. This guy is one of the bosses among the Link Joker clan. At Limit Break, his continuous skill is active, giving all of your front row Link Joker units +3000 power for every locked card on the opponent’s side of the field. This skill also includes giving itself a buff also. Here is where Infinite Zero Dragon comes in. If you are able to break ride Nebula Lord over Infinite Zero while you have 2 10k vanilla grade 2 rearguards in the front row, you lock 2 units on your opponent’s side of the field while also gaining HUGE power. The minimum power of all of your front row units, unboosted, will be 16k for the vanilla grade 2s and a minimum of 27k from your Vanguard Nebula Lord. That’s a huge amount of power for just unboosted units. For a minimum of at least 10k guard for the rearguards and 20k guard for the Vanguard to just guard all 3 attacks unboosted (not counting the drive triggers), that’s at least 4 cards out of the opponent’s hand. This can reach a potential of 6 to 8 cards that your opponent needs to guard with just to survive.

To conclude, the mechanism of Lock will shake the English meta to the ground when they are released in the near future (I’ve heard February). The players of Vanguard better be ready for the onslaught of the Link Joker and Reverse. You must all prepare for this Invasion and be ready. If not, there might only be Link Joker left in the world. Play hard and defend the world.  And remember to STAND UP, THE VANGUARD!