Hello, duelists. Now that we have our confirmed Forbidden/Limited List for the next few months, I figured that I would give my thoughts on the changes. Let’s get right to it, shall we?

Soul Charge to 1 per deck 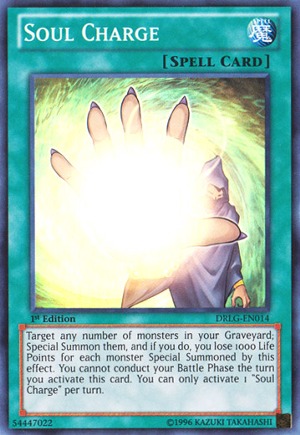 Some would argue that seeing this card go to 1 per deck is a good thing, but many of the better players agree that it should either be banned altogether or at 3 per deck. The reason being, the only real answer to a Soul Charge is an opposing Soul Charge. Traps are unreliable. Now, with it at 1 per deck, you will see games where one player draws into his copy, while the other player is left devastated and hoping to draw into his. Maybe next format they will realize that this card should just go away completely. We shall see.

Infernity Archfiend to 1 per deck 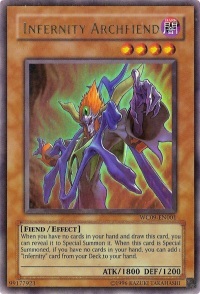 We all knew this was coming in some way. The deck has been a problem in various formats since its release, and while they continue to nerf it, it somehow always manages to pop back up. I think it’s finally dead with Soul Charge and Infernity Archfiend both being at 1 though. To be honest, the only reason Infernities were even viable again was because of Soul Charge. Before that, the game was run by Water and Fire. The last time it was relevant was during 2013, when both Monster Reborn and Card Destruction were legal. Those cards were both autowins for the deck, so when they left, it became unplayable. Soul Charge replaced those autowins.

Super Polymerization to 1 per deck 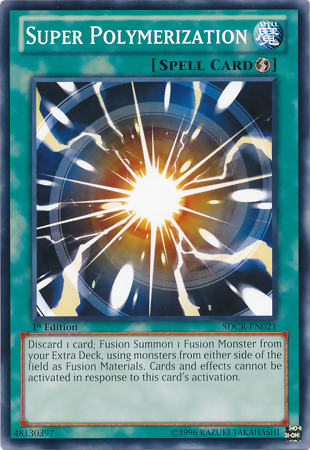 If you read my last article, you know that I consider this card to be a huge problem—and hopefully everyone else does, too. I was afraid that they would not touch it, though, because it only recently became a nuisance to the game. Typically, the last event of a format has little influence on the Forbidden List. I think it is a great thing that Konami caught this card before we had to suffer through 3 more months of its abuse. There is no way that a card with the text, “you cannot do anything about this card’s activation and effect,” should be allowed at 3 per deck. To make matters worse, Shaddolls will eventually have a fusion that uses every attribute (outside of Divine), which means there will come a time when almost every monster in the game can be absorded by their Super Poly. Just imagine that for a second. No matter what you summon, I can take it from you immediately and turn it into my own powerful monster. So, again, good catch by Konami.

Glow-up Bulb to 1 per deck

Players have been wishing for this card to come back since the day it left. Glow-up Bulb is the best 1 star tuner in the game, and for good reason. Thanks to Joe Giorlando, a few two card combos have already been discovered that will abuse this card. I’m not quite sure how they will hold up in a format with triple Vanity’s Emptiness being mained, or with Shaddoll Winda being a card, but only time will tell. Perhaps someone will make something innovative with the Shaddoll deck by using Glow-up Bulb once the earth fusion comes out in the next set. 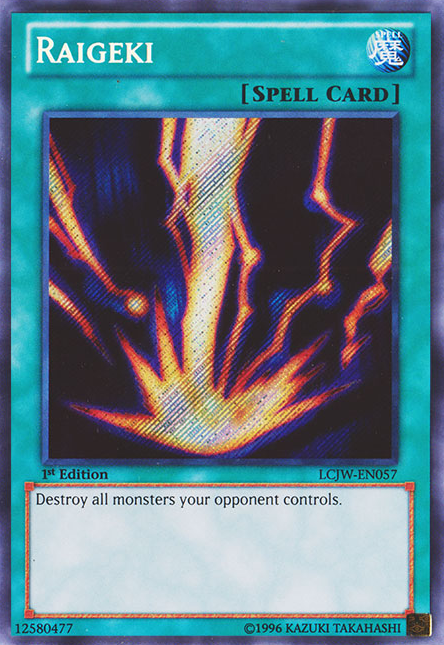 Most decks do not play Dark Hole or Torrential Tribute right now because they are simply underwhelming. Raigeki used to be one of the most feared cards in Yu-Gi-Oh, but nowadays, with the power creep and the absurdity of graveyard effects floating around, I think it’ll be shoved to the side deck. I can see it being really good against decks like Fire Fist and Mermails if they ever try to resurface, but it would be completely lackluster against Shaddolls, Burning Abyss, and even Satellarknights. I guess it might force the activation of Stellarnova Alpha if they have it, but since most of the guys pay for themselves upon summon, I doubt you’ll get real value out of it against that particular deck. At the very least, it will be pretty cool to see someone’s full field get nuked by one card on the livestream, and that’s sure to happen eventually.

Blackwing – Gale the Whirlwind to 2 per deck 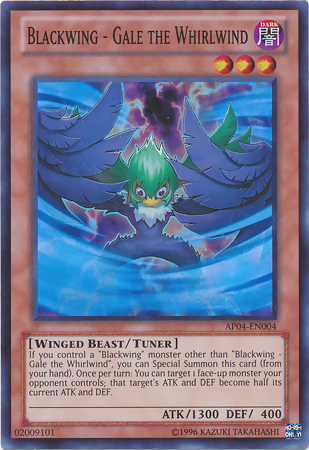 This was an irrelevant change. It will probably go to 3 per deck on the next list, just like with Magician of Faith. I don’t expect to see people using Blackwings anytime soon, unless they like to play at a disadvantage. When you think about it, it’s kind of crazy that the deck is almost back to the way it was in its glory days, and yet, that power cannot compete with the current meta at all. Don’t get me wrong, though, double Black Whirlwind is still enough to beat just about anything, if unopposed.

Gorz, the Emissary of Darkness to 2 per deck

I actually quite like this one going to 2 per deck. Gorz did not see play at all this year, and that’s because people have been relying on having multiple backrows to protect them. Some decks prefer not to play too many traps because it can interfere with their ability to combo off, and traps can make your deck feel pretty slow in general. Gorz could be great now because he offers you a large monster without having to use your extra deck. On top of this, you can set your opponents up by making it seem as though your backrow is preventing you from summoning him, but if it’s chainable you can unleash a nasty surprise. The most relevant example I can think of at this time would be having Sinister shadow Games set and your opponent swings at you directly. You activate the trap, send Shaddoll Beast to draw a card, and then activate Gorz, since your field is clear. With 2700 attack and 2500 defense, there isn’t too much that can deal with him nowadays. Hopefully, we will see his return this format.

The Transmigration Prophecy to 2 per deck 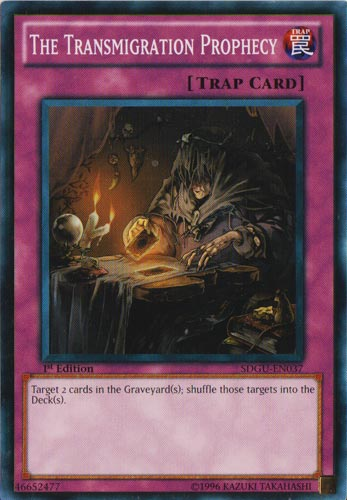 I have always liked this card, but I have never been able to commit to it. I like that you can use it to refuel your own deck, or to stymie your opponent’s plays, but I always felt like other cards can do it better. It wasn’t really seeing play at 1 per deck, and I don’t see that changing too much now that it’s at 2. D.D. Crow has always been my go-to card for this type of functionality. Hand traps are much harder to predict, and even harder to stop. I also think Number 49: Fortune Tune is much better at recycling your monsters (in Burning Abyss, anyways). The Transmigration Prophecy would have probably been infinitely more useful when Infernities were running amuck, as it can help you to put back opposing Stygian Street Patrols and Infernity Archfiends to prevent their abuse later on. At the end of the day, I think this card will remain mediocre.

Ceasefire to 2 per deck

The funny thing about this is that Soul Charge has been limited to 1, so its best use has been almost completely taken away. I am not a fan of degenerate burn decks, or even the idea of siding things like this for time, because I feel like it encourages slow play. In any event, I guess Chain Burn just became slightly better, but obviously still too inconsistent to be considered a serious contender. Let’s just hope that this card doesn’t go any higher than 2 per deck, though, while we’re at it.

Coach Soldier Wolfbark to 3 per deck 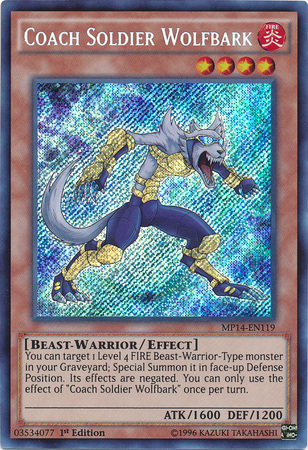 This is one of the bigger changes of the new Forbidden List because Wolfbark was previously at 1 per deck. Before he first became limited, he was being overused in +1 Fire Fists, and then Geargia took over after that. The game has changed a bit since then, so I don’t think Fire Fists will get too far just because of multiple Wolfbarks. The question that many players have been asking lately is, “Which deck is better now, Fire Fists or Satellarknights?” I think the answer is Satellarknights, and that is for two big reasons. First and foremost, Satellarknights have an absurd counter trap that negates pretty much anything, and then replaces itself. That card alone puts them so ahead of Fire Fists, especially when so many games are won by resolving one of two powerful effects. The next big thing is the quick summon of Satellarknight Delteros. He is the best rank 4 Xyz summon that requires 3 monsters right now, and his graveyard effect can only be fully used while playing Satellarknights. His other effect that prevents your opponent from responding to any of your summons is also pretty nice.

When I think of what Fire Fists have to offer, I immediately think about the strength of Bear and his instant monster removal, but there are too many good effects that would trigger by that in this particular format. Both decks have their fair share of unique Xyz monsters, like Starliege Paladynamo or Fire Fist – Cardinal, and each of them have very different uses, but I don’t think there are any blowouts in either case. What I will say to further my point that Satellarknights are better, is that you get your value out of the monsters as soon as you summon them. This means that when I summon a Deneb or Altair, unless my opponent negates their summon or their effect immediately, I will get value. On the other hand, with Bear and Wolfbark, you have to wait until your opponent doesn’t do anything to their summon, or do anything before you get to use their effects (like Book of Moon, Bottomless Trap Hole or Compulsory Evacuation Device).

Magician of Faith to 3 per deck 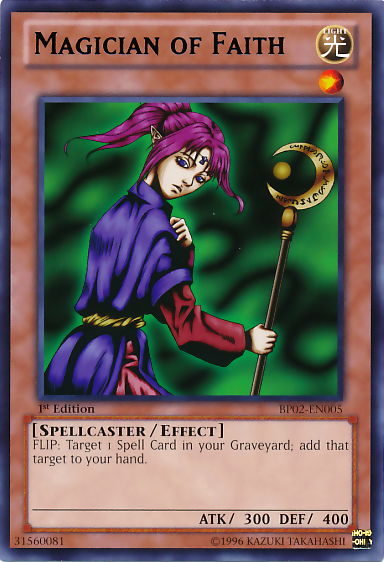 Again, this is an irrelevant change. Konami is basically removing her from being on the Forbidden List altogether, which makes sense because she has no impact on the game whatsoever.

Formula Synchron to 3 per deck

I could be wrong, but I do not know of any combos that require 3 of these. On top of that, extra deck space is very limited, and any deck that plays Formula Synchron will probably be unable to utilize the full 3 copies. I remember Formula Monarchs back in the day when Fishborg Blaster was legal, but those days are long gone. At the very least, the return of Glow-up Bulb makes this card very relevant again. Be on the lookout.

Reinforcement of the Army to 3 per deck 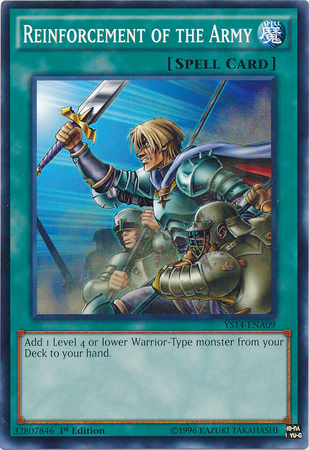