Hello Duelists, this week I'd like to discuss something that I noticed at the past ARGCS and other premier events recently: the various travails of playing on camera.

As you guys know, most of the Alter Reality Games Circuit Series are streamed (internet connection permitting) and recently, we have also incorporated YouTube feature matches, but what does that do to the players who play in these feature matches? The main point of this article is to be aware of the things that are going on and not to fall victim to these things when you get a feature match! 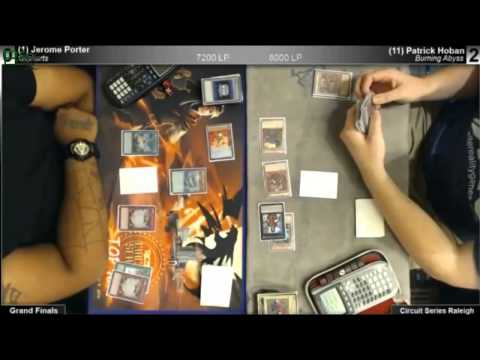 This is probably one of the most important things that I have noticed. Many players tend to play differently when they know that they are on camera. This can result in both positive and negative consequences.

When some players are told that there are going to be thousands of people watching their match, they tend to make more thought-out plays.  For example, let’s say that I open a hand consisting of Qliphort Scout, Saqlifice, Mystical Space Typhoon and 2 trap cards going first. Now, normally you would just activate Qliphort Scout, search out Carrier, equip Saqlifice, set three cards to your backrow, and pass. This line of play probably won't take any longer than 30 seconds as it's very basic. In a feature match, some players will think for way too long with that hand to make it seem like a very hard decision and make sure that they don't mess up while on camera, so they'll shuffle their hand for a while, activate Qliphort Scout, pick up their deck, and shuffle between some cards that they're "debating" on picking (when in reality there really is one obvious choice). There are both positive and negative aspects to this.

The positive aspect is for players who can keep a cool head under pressure, as they will have a better chance of making the best play that they can come up with in that situation. The negative aspect – which is really just the inverse situation - is that players who have trouble with people watching their matches or have other problems with being on camera may be more likely to misplay, rather than less.

Notice how the move I described above is supposed to take approximately 30 seconds, but now it can take up to 3 minutes, just because you're on camera. Now, at some point, your opponent notices that you’re taking too long and time is approaching, so he tells you to hurry up. Players often misplay under time pressure as well because they start to feel rushed, so playing at a reasonable pace is always important.  At any premier level event you should always know your deck inside and out, and so give no cause for your opponent to ask you to speed your plays up. Keep in mind that you can use all of this to your benefit. Maintaining a cool façade under pressure can in turn make your opponent nervous, leading to worse plays. Additionally, if your opponent is taking too long to make his plays, it is your responsibility – and often to your benefit – to ask your opponent to speed up their play. While various mind-games that some duelists have used in the past may fall under the category of “Unsporting Conduct”, maintaining a proper game-state is not just legal but required, and being on camera does not change this.

There are some players who like to be flashy for the camera. For example, players who check all of their cards in hand and all of their backrow following each of their opponent’s plays are often just posturing, a tendency which can be exaggerated by being on camera.  Now, there is a good reason to be consistent when responding to your opponent’s plays – it makes it more difficult for them to make reads on your cards.  However, you should know what your backrows are, and not having to check them at all will save both time and prevent you from leaking subtle, unconscious cues to your opponent on which cards are valuable and which are not.  If your opponent makes a Black Rose Dragon, spare everybody the tedium of watching you check all of your unchainable backrow and just send them to the graveyard.

Stage fright is something that more often afflicts players who are newer to competitive play and large-scale tournaments. The matches that usually get the most spectators are feature matches (especially in the later rounds). This is one of the big things that separates the veteran players from the others. You need to learn how to play under pressure if you plan on winning the event.  A trick that one of my friends likes to use to ignore spectators is putting on his hood, and he says it helps a lot because "If you can't see them, they're not even there."  Other, more direct methods of learning to ignore or deal with spectators exist, such as learning to give public speeches or performances, which are often even more closely scrutinized than a Yugioh match. If you dont learn to ignore spectators you will have a very tough time in the feature match area, just treat it the same as any other match that you played throughout the tournament.

Feature matches are quickly becoming a cool new innovation in the Yugioh world and part of the key to success at premier level events is being able to play the same on camera as you normally would. For those of you who have had a feature match or even a recorded match at locals, did it make you play differently? That's all for this week's article! If you'd like to see me write about a certain topic feel free to message me on Facebook. The Circuit Series stops by Fort Worth, TX next on February 7-8! I hope to see you all there!

Ghostrick or Treat!
The Newest Set of Problems with Burning Abyss
Our Contributors