Quest for the Wild Veggies

You are here: Home / Quest for the Wild Veggies
Categories: Bobby Brake, Kaijudo
by Bobby Brake

There are many different races in Kaijudo, anywhere from Angel Command all the way to Zombies. There is one race that stands out amongst all the rest, Wild Veggies! This type of creatures is where myself and many other players have gotten much entertainment from. They have so much flavor to them and just by reading their names and abilities you can’t help but laugh. These little guys deserve more credit than their given and hopefully will play a huge role in competitive play. I am going to go through and talk about some of my favorites and what the future holds for these awesome vegetables.

One of the very first Kaijudo cards I used was a Wild Veggie, Karate Carrot. The first deck I used in a tournament was a 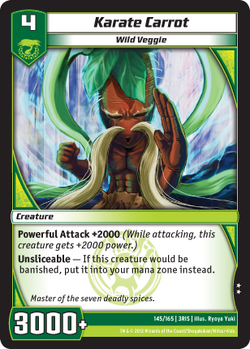 Water/Nature deck that focused on bouncing my opponents creatures while gaining mana by having my creatures get sent to my mana zone instead of being banished. I mainly used the deck just because I loved Karate Carrot though. Not only is he unsliceable, but he is the “master of the seven deadly spices.” Much later down the road, a new Veggie came out that brought me back to the good old days of Karate Carrot and that was [ccProd]Tricky Turnip[/ccProd]. She is probably the best Wild Veggie in Kaijudo right now. Her being Undiceable prevents your opponent from targeting her with their spells and abilities. My favorite part about this card has to be its flavor text though which reads, “Not to be outdone by her friend Karate Carrot, [ccProd]Tricky Turnip[/ccProd] cast a spell that made her undiceable. Because undiceable is WAY better than unsliceable. She said” This is just all around a great card. It is best when you combine her with Keeper of Laws though. You have to watch out for her because if you don’t eat all your vegetables, Tricky Turnip might come back for revenge.

My 3rd favorite Wild Veggie is [ccProd]Fullmetal Lemon[/ccProd]. This is also another competitive Veggie. He is one of the best blockers in the game right now. Having 3500 power and being a Blocker/Skrimisher is great against all the lower costing creatures players are using. Its Juiced ability also helps you mana ramp really quick. Like all the other Wild Veggies, his flavor text is amazing, “Who ordered the lemon aid?” Get it? Because he is coming to help and he is a lemon? I cracked up laughing when I first read it. This card was such a favorite that WotC made it a KMC promo for people to get when they entered a KMC this past season. There isn’t anything better than some foil Lemons!

Quest for the Wild Veggies

Quest for the Gauntlet comes out on May 30th. I am pleased to inform you that there is even more Wild Veggie support

in this next set. The first one I am going to talk about is Colonel Corn! He costs 5 mana and has 4000 power. His Husky ability says whenever he enters the battle zone, one of your other creatures get +4000 power until the end of the turn. He may not see too much constructed play, but I bet he is pretty good in draft. Being able to boost up one of your other creatures can swing the tide of a game. His flavor text is a quote from another Wild Veggie, Corporal pepper, “He’s one tough colonel. He’ll never pop under pressure.”

The other Wild Veggie that we know of from Quest is Sumo Artichoke. I cannot wait to try this card out. It is an 8 cost Shield Blast Creature and has 3000 power. It has two different abilities, the first one is Planted – When this creature enters the battle zone, you may tap it. Its second ability is Choke Hold – Each time one of your opponent’s creatures attacks, it attacks this creature if able. It is pretty much an instant [ccProd]Ninja Pumpkin[/ccProd]. Depending on your opponent’s battle zone, this could save you from losing if it is broken at the right time. This is very strong against rush decks that do not use many creatures above 3000 power. It may not seem great because it costs so much mana but with the help of [ccProd]Neural Helix[/ccProd] or [ccProd]Cyber Lord Corile[/ccProd], that should not be much of a problem. We only know 3 Shield Blast creatures right now but he is my favorite so far.

This weekend, May 10th, there is a Veil Breach at Magelings in Columbia, Missouri. There will be a chance for 8 people to draft Quest for the Gauntlet at this event 3 weeks before the set is even released, along with other awesome events going on throughout the day. I will be going so if you see me, which I will stand out like a green thumb, please feel free to ask me to duel. I will be bringing my Wild Veggie deck and want to duel as many people as I can. If you beat me, you might even get a special surprise. This is going to be a great event and cannot wait to see everyone.

As you can see Wild Veggies aren’t going away anytime soon. They are a stubborn group that will always fight their way to the top. You should try them out sometime because vegetables are what help you get big and strong. Remember it’s not all about winning, but having fun! The Circuit Series comes to Washington, D.C. on May 31st - June 1st, 2014! Click the picture below for all the details!