Back in 2008 Tele-Dad reigned as the outright best deck deemed Tier 0. Taking up more than half of the top spots in almost every event it participated in, Tele-DaD is one of the most powerful decks in the game’s history! After a multitude of ban lists shook the game, many duelists have abandoned the idea of Tele-DaD, because it was heavily restricted on the lists. Due to the lack of events the past two weeks I’ve been at my locals for what seems like an eternity. While there I noticed my friend Austin Piontek performing quite well with a new-age Tele-DaD deck, which I’d like to share with all of you! Austin has always played decks he enjoys and completely ignored the Meta decks. While this is not the best strategy on a premier level, this is definitely something I admire locally. As I’ve previously stated, some players are quite satisfied with local success because they don’t plan to travel and just play casually. Austin is a local player who plans to take his favorite deck to YCS Chicago and see how it stacks up with the rest of the field, lets take a closer look at his deck list!

3 Reinforcement of the Army

What does the deck do?

When Austin sent me this deck list I must admit I was quite confused as to why it was a 41 card with 3 upstart goblins! I was also scratching my head as to why he used Mask Change as a two of and Mask Change II as only a one of. Naturally, I asked Austin why played cards at the ratios that he did and I was pleasantly surprised! Austin created this deck to set up strong boards that are difficult to break, similar to how Sylvans operate. The main field this deck works to establish is one that consists of Void Ogre Dragon, Dark Law, and Lavalval Chain. As the game progresses it becomes even easier to summon Dark Armed Dragon and finish the game because of cards like Plaguespreader Zombie, and Destiny Hero Malicious mitigating the amount of dark monsters in your graveyard.

How Does The Engine Work?

Back in 2008, Elemental Hero Stratos was one of the main engine cards because it allowed you to search for any Hero monster in your entire deck, but in today’s game Stratos is banned. With the absence of Stratos Tele-DaD was lacking a strong search engine, which meant there was a new variable to solve for! How could you possibly fuel your Destiny Draws and consistently gain access to Destiny Hero – Malicious? A few months ago a perfect solution was introduced in the new Hero structure deck. Elemental Hero – Shadow Mist has been deemed the new Stratos because of his ability to search for any Hero monster, which means Tele-DaD can now search Malicious easily again! 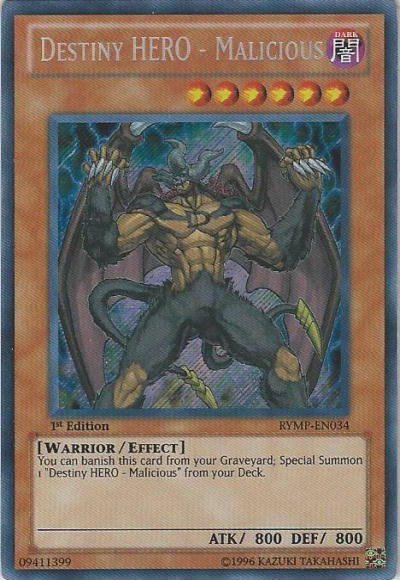 “Shadow Mist is the heart and soul of the deck,” says Austin. Since Shadow Mist’s effect triggers when he is sent to the graveyard, Austin plays cards like Armageddon Knight, Dark Grepher, Foolish Burial, and Lavalval Chain. Shadow Mist’s other effect comes up when here is a copy of Destiny Hero – Dasher in your graveyard, because if you draw Shadow Mist you can banish Dasher from your graveyard to special summon the Shadow Mist and get a free plus 1 (search a mask change card). You might be wondering how often this play comes up, but you can use Plaguespreader Zombie’s effect and stack the Shadow Mist on top of your deck for the next turn. Lavalval Chain’s ability to stack any monster on top of your deck can facilitate this play as well. “This is why I chose to run Dasher over Doom Lord, who is a simple out to most things, but does not synergize well with the deck,” explained Austin.

The three copies of Reinforcement of the Army allow this deck to easily search for the Dark Grephers and one Armageddon Knight, which is obviously important because both of these monsters ignite your plays. Austin says that anymore than the 2:1 ratio of Dark Grepher and Armageddon Knight is unnecessary because of the deck’s low monster count and incredible draw and search power.

Step One: Normal Summon Armageddon Knight and use his effect to send Elemental Hero Shadow Mist to the graveyard. Use Shadow Mist’s effect to search your deck for Destiny Hero – Malicious. (Five Cards in hand) 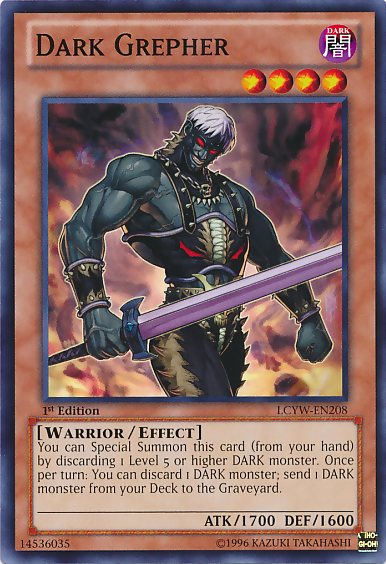 With this setup you have the ability to do just about anything that you want in this deck. For starters this play sets you up with three Dark monsters in your graveyard, which lets you special summon the devastating Dark Armed Dragon for free! Additionally, you have access to any of the rank fours in your extra deck, which are Castel, Lavalval Chain, and Exciton Knight. While Castel and Exciton Knight are both great options, you will almost never be using them in this situation unless you are playing into backrow (Going Second). Lavalval Chain allows you to supplement your graveyard with an additional Plaguespreader Zombie or even stack any monster on top of your deck. Exciton Knight can be quite devastating because he can simplify the field and allow you to freely summon multiple level eight synchro monsters.

As I mentioned earlier in the article, Austin is playing a 41-card deck with three Upstart Goblins! As strange is this ratio is, Austin had a defense for it.

“The 41st card is the second Diamond Dude. You can run the deck at 40 with one Diamond Dude just fine, but the second diamond dude is another Reinforcement of the Army, Shadow Mist, Mask change, and Dark Grepher/Armageddon Knight target. The reasoning behind why I left all 3 Upstarts in is this is because I can power through all of my monsters easily. My spell cards are what keep the deck going. If I use Diamond Dude's effect and hit any of my Upstart goblins, I'm drawing 2 cards next turn. I can't justify taking one of them out in a deck that demands to see combo spell cards. They're the only things I cannot search.” 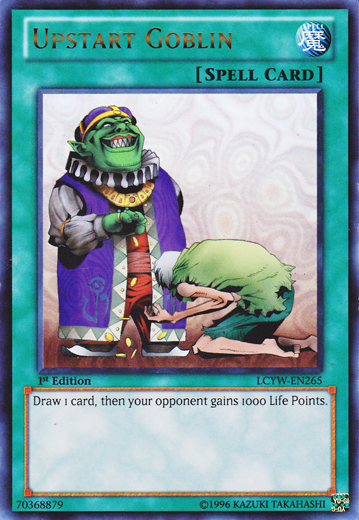 More on the Spell Cards

Since Diamond Dude is so very important to this deck’s viability, Austin opted to main deck 12 normal spells, which gives Diamond Dude twelve targets. According to Austin, the spell card that takes this deck to the next level is Mask Change, NOT Mask Change II. Since the deck plays out its hand to zero, every combo piece goes toward summoning multiple Void Ogre Dragons. For this reason you can’t afford a card to discard for Mask Change II without potentially faulting your overarching combo. Mask Change II also requires you to summon a monster with a higher level and since Destiny Hero – Malicious is level 6, you can’t even use him with Mask Change II. “Mask Change II forces you to send combo pieces more often than it is a useful discard, and is more limited in what it can summon. For this reason, I only play one,” says Austin.

The only trap card in this deck is Breakthrough skill because of how fast the deck runs. Since you’re continuously aiming to establish a huge board and lock your opponent out of their plays, you don’t need too many traps. The only weakness this new Tele-DaD deck has is monster effects, which makes Breakthrough Skill a perfect candidate as the only trap card. 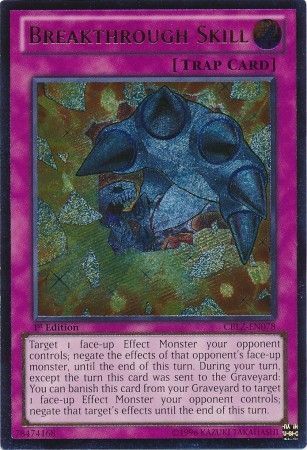 “Void Ogre Dragon is the powerhouse of the deck,” says Austin. Weighing in at 3000/3000 this monster is a huge issue for a lot of decks to get over. Summoning multiple Void Ogre Dragons creates a very difficult situation for Nekroz and Qliphort players, because once per turn he can negate and spell and trap as long as you don’t have a hand. The Beelze is used primarily to combat Shaddolls because Construct cannot kill him. Metaphys Horus is the “ace in hole” as Austin says, because he can directly answer Shadow-Imprisoning Mirror, which has been an issue for this deck. Since Metaphys Horus permanently negates cards that it affects, you can use it against pendulum cards, namely Qliphort Scout! The deck uses Constellar Ptolemy M7 to out Diamond in the Satellarknight matchup because Austin sides in enemy controllers! 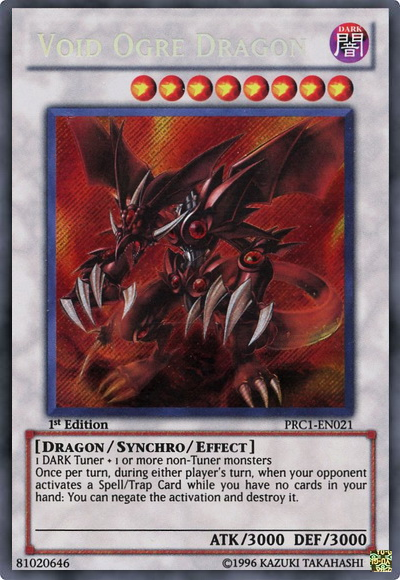 Unfortunetely Austin Piontek didn’t want to share his side deck because he felt it was better kept secret. I hope this was a nice fun deck to look at the week before YCS Chicago, and the week of ARG Metro Series Detroit! I’ll be in attendance at both events, and look forward to seeing all of you there! Until next time, play Hard or Go Home!