The Fire and Darkness Mystic and their Spells

You are here: Home / The Fire and Darkness Mystic and their Spells
Categories: Bobby Brake, Kaijudo
by Bobby Brake

Last week I talked about the Nature Mystic and Swift Regeneration. To continue my series on the Mystics and their spells, I am going to be discussing the Fire and Darkness Mystic along with Absolute Incineration and Absolute Darkness. It is really interesting looking at each of these cards because you can tell that the R&D for Kaijudo was wanting for these cards to have synergy, which they do. These 4 cards will have a huge impact on the game and how it is played.

The Mystic of Fire

I was really surprised the first time I saw this card because of its power. It costs 6 mana, has 6000 power, and is a double 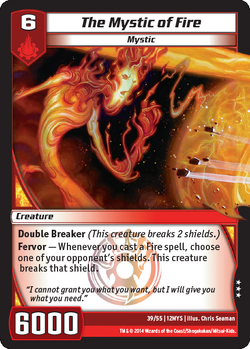 breaker. This indicates that it was designed as an aggressive card, which makes sense because that is what the Fire civilization is good at. It has a Fervor ability that says when you cast a Fire spell, choose one of your opponents shield. This creature breaks that shield. I like breaking shields for free! If you play this guy on turn 6 and then [ccProd]Spellbane Dragon[/ccProd] on turn 7, pretty much whenever a spell is cast, your opponent is going to lose a shield. Most fire spells have to deal with banishing creatures so this way you are able to get rid of your opponent’s creatures and their shields at the same time. A really fun combo, though hard to pull off, is using this with Ariel Bombardment. If your opponent has 6 or more shields and you play that card with the Fire Mystic out, you can send 3 shields to the discard pile and break another 1. That is getting rid of 4 shields in 1 turn, without even attacking!

This is by far the best Fire spell to be printed in Kaijudo so far. It banishes an 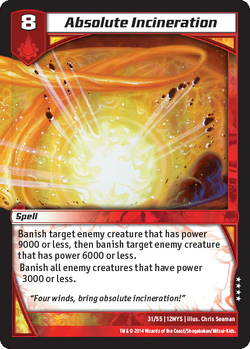 opponent’s creature with 9000 power or less, 6000 power or less, and all creatures that have 3000 power or less. It is pretty much Dragon's Breath on steroids, though it is not a shield blast. This card does target however, so it cannot banish [ccProd]King Neptas[/ccProd] or [ccProd]Keeper of Laws[/ccProd], in some cases. It does banish [ccProd]Tricky Turnip[/ccProd] though because the banishing of all 3000 power or less does not target. This has the potential to wipe out your opponents battle zone on turn 8 if you play it. It is going to be very difficult for aggressive or tempo decks to play around this card. I think a lot of decks like that will have to use nature and use Swift Regeneration just to counter this huge threat. I love cards like this because it changes the way we play Kaijudo. Right now there is not a reason to just play a creature every turn, but now there is because of this. Being able to play around this will introduce new skill and mind set of how to play. Absolute Incineration will punish the players who do not know how to conserve their cards.

The Mystic of Darkness

This was also another surprise when they previewed this card. All of the levels of 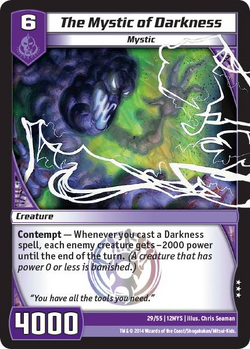 the other Mystics were 4,5,6,7. So we figured that the Darkness Mystics would be level 3 or 8, but turns out it was 6, just like the Fire Mystic. It does not have the power though, it is meant to be more of a control card, which is what Darkness is known for. The Darkness Mystic has 4000 power, which isn’t too bad, gets over most of the smaller creatures. Its Contempt ability is interesting, whenever you cast a darkness spell; each enemy creature gets -2000 power until the end of the turn. One of the best ways I can think of using this is with [ccProd]Suffocate[/ccProd] or [ccProd]Toxic Fog[/ccProd]. Those cards already minus power to all your opponent’s creatures and the Darkness Mystic will just give them that extra push they need. So you can -4000 power to all your opponents creatures if you are able to cast Suffocate while it is in the battle zone. This card is great against tempo decks if you can get him to stick in the battle zone.

This spell is very similar to Absolute Incineration. Each enemy creature gets 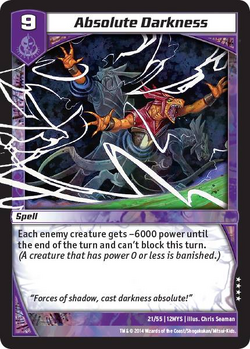 -6000 power until the end of the turn and can’t block this turn. The reason this may have the edge over Absolute Incineration is because it does not target. It does not matter what creature is in your opponent’s battle zone, they are getting -6000 power. It also gets around Swift Regeneration, because Swift Regeneration only works if they have a power greater than 0. So if the Fire Spell can’t do the job, this one sure will. This one can be even more devastating if you have the Darkness Mystic in the battle zone because then it minuses 8000 power to all your opponents creatures. That pretty much covers every creature than costs less than 9 mana, that is played competitively. If people thought Andromeda was bad on turn 9, this seems far superior. At least with [ccProd]Andromeda of the Citadel[/ccProd] you can deal with it and keep going, this just gets rid of your whole battle zone most of the time. I can’t wait to see what cards people are going to start using in order to try to work around this card. The added bonus of saying your opponent can’t block is the icing on the cake. Your opponent’s [ccProd]Eternal Haven[/ccProd] will just sit there helpless.

These spells are probably my two favorite that are in the 5 Mystics. They are going to completely change how we go about playing Kaijudo and the strategy that is involved. Next week I am going to be finishing up this series by talking about the Water and Light Mystic and their spells. The Light Mystic brings something completely new to Kaijudo, an alternate win condition! I hope you guys look forward to that and remember it’s not all about winning, but having fun! The Circuit Series comes to beautiful Las Vegas on March 15-16, 2014! Click the picture below for all the details.

Future Visions
Paradoxes in the Current Format
Our Contributors