The Mystic of Nature and Swift Regeneration

You are here: Home / The Mystic of Nature and Swift Regeneration
Categories: Bobby Brake, Kaijudo
by Bobby Brake

The 5 Mystics comes out on Mach 14th, which is only a couple weeks away! You can pre-order your boxes from Alter Reality Games for only $59.95 right now. The last set to come out was Invasion Earth back in November, so everyone is really excited for this new set after such a long wait. This set will be very special for Kaijudo because for the first time all the Very Rares are going to be Spells. If you follow the Kaijudo TV show, season 2 is about Ray trying to stop the Choten by going to the Mystics and learning their spells, it is awesome to see all of them in the card game now. Four of the five Mystics are going to be rare, they are not just regular rares though, they will have a foil treatment done to the art where the spell is being cast! I am going to do a little series of articles talking about each individual Mystic and their spell because they go hand in hand, starting with this article. Without further a due, let’s look at these cards starting with Nature!

The Mystic of Nature

I like how this guy only costs 4 mana. It makes him very easy to use in early game which is where I feel his ability will benefit players the most. His Renewal ability says, whenever you cast a Nature spell, choose a creature in your discard pile and put it into your mana zone. This ability seems a bit conditional; you need to have a Nature spell and a creature in the discard pile for this to work. It may seem difficult but you might just need to think outside the box and use cards that are not typically used. The best card 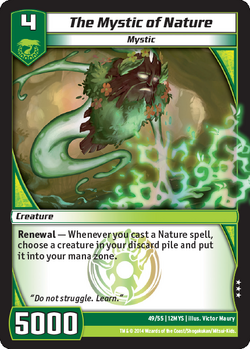 I can think of using to help with this card is [ccProd]Gloom Tomb[/ccProd]. The ideal turn 3 play would be to play Gloom Tomb, send at least 2 creatures to the discard pile, including the Nature Mystic and then put him in your hand with Gloom Tombs effect. Then you would have everything set up for his ability to work and have him in your hand all by turn 3. An awesome combo you can pull off is play the Nature Mystic of turn 4 then Mana Storm on turn 5, and put a creature from your discard pile into your mana zone, you just went from turn 5 to turn 9 in one turn. It is also important to point out that his ability works with any Nature spell, not just the ones that give you more mana. Other nature spells are not used that much outside [ccProd]Root Trap[/ccProd]. This does include Multi-Civ cards as well. So if you play [ccProd]Oathsworn Call[/ccProd], [ccProd]Crystallize[/ccProd], or [ccProd]Fight![/ccProd], you would be able to accelerator your mana as well. He can even be great late game if you use cards like [ccProd]Kurragar of the Hordes[/ccProd]. If you have both those creatures out there and you play [ccProd]Reap and Sow[/ccProd], Kurragar’s ability will trigger twice. The reason he puts creatures into the mana zone is because of the Spell of Swift Regeneration brings creatures out of the mana zone, that is how they work together. This is a really interesting card and I look forward to see how people will utilize his ability.

This was the first spell, from 5 Mystics, that was previewed by my friend Carl Reddish. This card is really interesting and has two different effects. The first lets you get creatures in your mana zone that have total level of 7 or less and put them into the battle zone. This does not mean all level 7 or less but when you add all the levels, they have to be equal to or less than 7. So you can get two creatures that have a level of 3 and 4, or just one level 7 creature if you wish. It seemed a little confusing at first because it 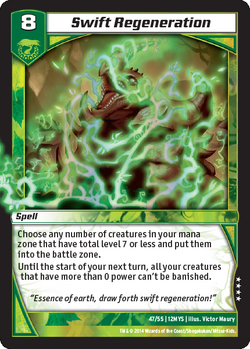 is the first effect of its kind that deals with total level numbers. This effect goes great with the Mystic of Nature because not only can you accelerate to this spell, but you can choose which creatures you may want to put in the battle zone. This effect can be deadly in a deck using fast attackers. You can get back a [ccProd]Gilaflame the Assaulter[/ccProd] and a [ccProd]Jet-Thrust Darter[/ccProd] and be able to attack with both of them. It is going to be interesting to see how people use this effect because you do lose mana by doing this so you are going to have to be careful how many creatures you choose to retrieve out of the mana zone. If that does not seem like enough for an 8 cost spell, there is more. The second part says until the start of your next turn, all your creatures that have power greater than 0 cannot be banished. I like how they said greater than 0, because creatures that have their power reduced to 0 or less are banished in Kaijudo. This plays a key role with another one of the spells from The 5 Mysitcs. Outside power reduction, all your creatures are pretty much indestructible for a whole turn. This is my favorite part of the card. If you really want to have some fun, try and combine this with creatures that have Slayer. They still lose to the battle so your opponent’s creature is banished but your slayer will still stay in the battle zone thanks to Swift Regeneration. You can also feel free to attack all you want after you play this card because most removal people use is banishment abilities.

I am really excited that nature is getting cards that will work very well in the competitive meta. It is also great to see that aggression is getting an extra push, it is no fun to play and just pass every turn without any excitement going on. I already have a few decks in mind that utilize both of these cards and I cannot wait to test them out and try to use their full potential. Remember it is not all about winning, but having fun as well! The Circuit Series makes its next stop in Las Vegas, NV on March 15-16, 2014! Click the picture of the Dragon below for all the details!