The Power of Information

Greetings duelists! This week I’m going to discuss the importance of Information in Yugioh and why it’s become increasingly powerful these past few years. Generally speaking, if you want to top an event or win the whole thing, your deck needs to have some sort of edge that makes it an outlier in the scatterplot of decks. This “edge” is usually attained through the use of tech cards, which are cards that aren’t popular but will create an advantage against certain match-ups (Sometimes all match-ups, but not usually). Finding the right tech card is not simple because the best techs are typically found after long hours of playtesting. As you test with your group (or by yourself!) you will begin to identify the problems your deck has, and hopefully how to fix them! Just because you’re having problems with your deck does not mean you need to abandon it. If anything, identifying problems and then solving them makes for an even bigger edge. This bigger edge will come from others counting your deck out, even though you found a way to solve all the problems it had!

Alternatively, you can examine what makes a deck great, and systematically determine a strategy that will make the deck’s greatest advantage its greatest limitation. I’ll use Dragon Rulers as the paradigm for the aforementioned theory. The Dragon Rulers are all monsters that can special summon themselves for free by removing more Dragon Rulers (This is the most optimal situation) from the hand or graveyard from the game. Furthermore the removed from play Dragon Rulers replace themselves with another Dragon of the same attribute, which makes for an almost infinite flow of special summons. Knowing that Dragon Ruler’s greatest strength derives from Special Summoning, it’s quite logical to play cards that prevent Dragon Rulers from Special Summoning themselves. Patrick Hoban exhibited this strategy at Nationals in 2013. Hoban main decked two copies of Vanity’s Emptiness at the NAWCQ in 2013 to make his Dragon Ruler mirror match a breeze. He was able to go undefeated against the mirror match (11 mirrors!) at that event because he realized that Vanity’s Emptiness would create an autowin situation for him. 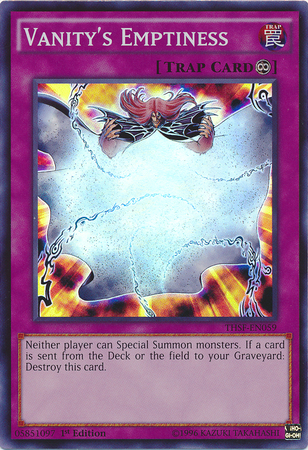 Following the release of the September, 2013 Forbidden and Limited List, Dragon Rulers still reigned supreme, which meant Vanity’s Emptiness was still going to be one of the best ways to beat the deck. Aside from Vanity’s Emptiness, there was another tech card that helped keep the deck in check. Lets take a look at one of my favorite tech cards I’ve seen in recent years, and why it was so successful.

At ARG Circuit Series, St. Louis (in 2013), Brady Brink and Dalton Bousman introduced Mystical Refpanel to the metagame. At this point in time, Dragon Rulers were still the best deck despite taking a blow on the September 1st ban list. One of the best cards in the Dragon Ruler deck was Sacred Sword of Seven Stars, because it was a Pot of Greed that allowed the user to trigger his/her Dragon Ruler effect while also drawing two cards. With such a powerful card in the game (and at 3!), there had to be some way to punish players for using its effect. Brady found the solution through Mystical Refpanel, which would severely punish a player for using Sacred Sword. Once again, a card was found that took the best part of a deck and made it the deck’s own worst nightmare.

Mystical Refpanel created the “edge” that made Brady and Dalton’s deck an outlier among the other decks in the field, because it wasn’t expected and nobody was ready for it. As previously stated, the players with an edge in their decks will have a higher chance of topping or even winning the event that they prepared for. Information is a very precious thing in this game, and it’s something that is not to be shared with people outside of your testing circle. What would have happened if people knew Brady and Dalton were side decking Mystical Refpanel at that event? Things might have gone a bit differently for them because the Dragon Ruler deck didn’t need Sacred Sword to win the game. This means that if someone knew that Brady and Dalton were siding in Mystical Refpanel, they could side out their Sacred Swords and create two dead cards in Brady and Dalton’s decks.

More recently, I made the mistake of giving away information prior to a more important event with Jeff Jones and Alex Vansant. Leading up to the 25k Championship in Philadelphia, we had all been working on the Kozmo deck that everyone had seemingly written off. I was skeptical at first, but once Jeff trounced me again and again with the deck (I was using Nekroz) I realized that we could do that to everyone at the 25k. I immediately realized that we should use Kozmo for the 25k because of one huge reason and a few others. The biggest reason was that people would have to read the Kozmo cards. Anytime your opponent has to read your cards, you are usually going to be in pole position the entire match, because your opponent will have to calculate a strategy on the spot, while you already have yours practiced and perfected. Not to mention the fact that your opponent’s “on the spot” strategy may not even be a correct route to take, which made me very confident in using Kozmo for the 25k.

The Kozmo deck was able to make one of the best parts of Nekroz, Valkyrus, irrelevant. Nekroz’s power stems from Valkyrus in ARG format because there is no Trishula. Valkyrus advances the deck’s gamestate through his draw effect and prevents the deck from getting Otk’d. Since the lower level Kozmo monsters can dodge Valkyrus and open the gateway for massive amounts of damage, Nekroz becomes forced to play awkwardly against Kozmo. Another way that we found we could exploit the best parts of Nekroz was through Manju and Senju, especially in a format without Nekroz of Trishula. In ARG format it’s perfectly fine to just summon a Manju/Senju (Jus) and pass your turn to wait for a better play on the next turn. Since Manju and Senju only have 1400, we found our opening with Farm Girl to net free advantage, because whenever Farm Girl does damage she searches for any Kozmo card. With Farm Girl in the mix, it’s not longer safe to just leave a Ju on the field because then you run the risk of getting beaten over by a Farm Girl. 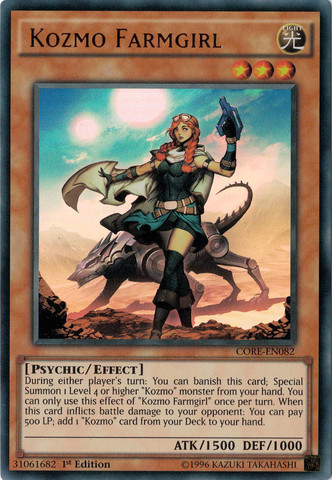 As the 25k neared, Jeff and I heard about a free case tournament at Alterealitygames in Medina, Ohio. I asked Jeff if he thought it would be a good idea to play Kozmo at the case tournament and he thought it would be okay if we made it seem like we were playing a fun deck. Reluctantly I agreed and we entered the tournament with our Kozmo deck. Jeff and I both went undefeated in the swiss portion of the event, and we raised a lot of eyebrows and caught everyone’s attention, which worried me. After the tournament our deck lists were posted and at that point I knew it was over for us. Our edge was revealed before the real tournament and at that point we had to try and come up with something to give us a new edge. I saw the writing on the wall, and switched back to Nekroz because it’s what I felt most confident with.

With Nekroz back in my hands I only had three days before we left for the 25k to try and solve the Kozmo problem. After extensive testing with Jeff and Marjanco I found that System Down and Cyber Dragon Core would help alleviate a bit of the frustration that stemmed from that particular match-up. I was sure to only share this newfound solution with a select few people since the tournament was only a few days away. When I arrived at the event, I noticed that a lot of players came to the same conclusions as me, which worried me as I felt I had failed in finding a real edge. With a deck similar to the rest of the field, I didn’t feel like I would be doing any better than anyone else who was competent with Nekroz. Evidently I didn’t do well in the main event due to lack of testing and some encounters with floodgates.

In conclusion I cannot stress enough that if you have something truly special saved, that you keep it in your testing group until the day of the event. Keeping your information private is going to be crucial to exceling at future events. After all, you worked hard to develop your edge for that event, don’t let someone copy your work and see better results. Be careful who you share your information with as some people are only trying to probe for your secrets! Ycs Toronto beckons, and I know I’ve found my edge, so hopefully you can find yours too! Until next week, Play Hard or Go Home!