The Scoop: The World of Lists

Salutations, duelists! Welcome back to The Scoop! The absolute realest Yu-Gi-Oh! News Report on the internet, and of course it's right here on ARG!

We once lived in a world of one Forbidden and Limited lists. You built your deck for whatever format was in play, and adjusted, still according to that list, for the duration of the format. Every event you played in followed that format, unless some sort of special rule was in play, which was not often. This is what we were accustomed to, and although we complained about it plenty and had multiple suggestions in regards to what we could do to the list to make it better suit the game, those changes never were taken into consideration and we simply played under the stipulations that were given to us by Konami.

Fast Forward to now, where we live in a world of two Forbidden and Limited lists! The likes of which are NOT very similar, might I add. This means, for those that plan on attending both Konami and ARG events, playtesting and strategizing under two separate lists which constitute two different realms of possibilities. The same deck likely won't be legal under both lists, let alone be competitive from top to bottom. This presents an interesting twist on the game, and I strongly wish that more people would attend ARG events at the rate that Konami events garner attendance so that the abilities of the player base as a whole could be tested. 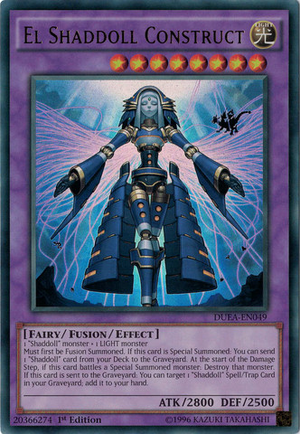 The ARG List presented us with a rather new look on things with its "list-on-the-go" approach, taking the harder hit off of Shaddoll Construct after its underwhelming performance in the most recent ARG Circuit Series. What do you think of this approach on the list? It keeps players on their toes and shakes the format up a little each event. Do you like the change or do you think that the list should be set in stone for a certain amount of time? Let me know in the comments below!

In essence, it will be a fun couple of months seeing those that come unprepared to events piloting a deck that was built for a completely different format. Who will enter YCS Dallas with a Burning Abyss deck packing only a single copy of Cir? We shall see as time goes on!

In other, often times more skill intensive, games, there might be large-scale tournaments where players have to play through multiple formats within the same event. Some newer format, an older format, and a draft format, for example. Players in said game work diligently to maintain their status at the top of the ladder in their respective game. Yu-Gi-Oh slightly introduced that with its Top 16 draft in the final stretch of YCS events. Players who were skilled, or lucky, enough to make it to that point took part in a draft of the latest Battle Pack, and played with those 40 cards for the duration of the tournament.

Konami has done away with this, though. In a recent announcement, it was noted that beginning at YCS Toronto, the Top 16 of YCS events will no longer be draft. Players are on opposite ends about this as some enjoyed the different aspect of the game, while others believed that the deck you piloted through Swiss rounds and Top 32 cut should be the deck that you take all the way to your victory or defeat, whichever is in the cards for you. Judging by the looks of the different opinions, the players who are more skilled in the art of Yu-Gi-Oh as a game, as opposed to being skilled with a particular deck, do not like the change, as it presented a higher opportunity to win against players who were only skilled with a certain deck and did not completely understand the basic concept of Yu-Gi-Oh. It does seem as if with the power creep through the years, the newer players don't quite grasp the concept of advantage and tempo, and are used to just laying it all out on the table and creating an impenetrable board that is generally supported by one or more floodgates. In Battle Pack Draft, however, this is just not the reality of the format.

In any case, don't expect to take an hour or two in between Top 32 ending and Top 16 beginning anymore because that aspect has been removed from the game!

A First Foray into the Force of Will TCG: a Magic Player’s Perspective
What does the future have in store? GB04 Predictions
Our Contributors