Hey YuGiOh Community! Chad here once again with yet another article about the Battlin' Boxer archetype. Over the last month or so, I've given you an introduction to the Battlin' Boxers and I've covered all of the new support announced for the Battlin' Boxers up to Shadow Specters. My topic of this article, as you can see by the tittle, is different tech cards you can put into the deck right now since we don't have shadow specters yet. To be honest, even if we had the new support I think I really wouldn't even use the new stuff. Anyways, without further adieu let's get right into the  cards I'll be covering which are cards that I've tested on Dueling Network, DevPro, and in reality, and then at the end of the article I'll show you guys the results of my testing with various tech cards and such. And now for the first card...right after this...

Quick Question: What's your play style like? Do you prefer summoning big guys and protecting them or comboing off and winning quickly? My personal play style is to summon big guys like lead yoke and protect them for a while, however I do like to experiment with other decks, and right now I'm also using wind-ups to experiment with the new combos and stuff. Remember to answer the quick question in the comments below if you want to.  Now for the first tech card... 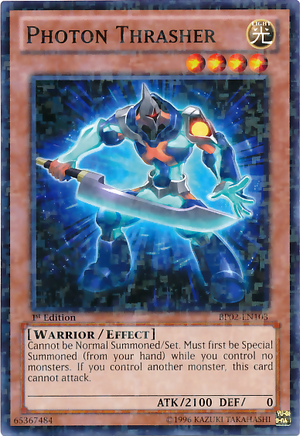 Photon Thrasher. Not very much to explain. pretty much standard tech for any warrior deck, and I have a picture to the left so with that we really don't need to go into much detail. All you really need to know is that with photon thrasher in your hand, if you open right, you can put a big monster on the field on the first turn, such as Number 105: Battlin' Boxer Star Cestus, Number C105: Battlin' Boxer Comet Cestus, or even something like Shock Master or Utopia Ray/Utopia Ray V. 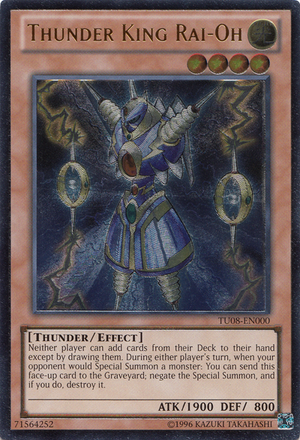 Anyways, the next card, to the right, that I want to talk about is Thunder King Rai-Oh. While this deck does search somewhat, it does have quite a hard time with match-ups like prophecy that search a lot and this could severely slow those match-ups down and possibly give you an edge against your opponent, and 1900 attack isn't bad either.

When you play thunder king in the deck you have to play really smart so you can slow down your opponent some what,, but you have to be careful not to shut down your searching with stuff like duality and reinforcements of the army. 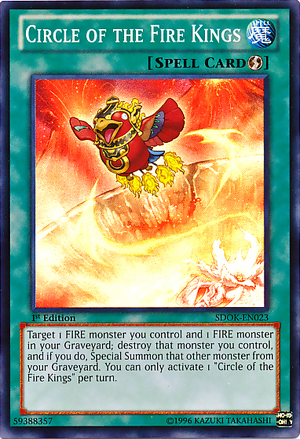 Yup, Circle of the Fire Kings, most people would expect it to be in something like a fire King or Hazy Flame or Fire Fist deck, but surprisingly it works really well in Battlin' Boxers because (ready for this) they are all FIRE attribute. One of the best ways this can be used to maximum advantage in a  Battlin' Boxer deck is to use it while you have Battlin' Boxer Glassjaw on your field. This will cause glassjaw's effect to go off, and you'll get a free special summon of another fire attribute, and you'll be able to add a Battlin' Boxer from your graveyard to your hand  such as switchitter, which if played right could get you a free xyz summon so basically for the price of two cards you get a free card to your hand and a new better monster on the field, and it could only get better from there.

Well, that's all the tech I've tested in the main deck other than hand traps, and honestly the only hand trap you really need depending on your build is Maxx "C". So with that, it's time to reveal the current build I've been testing

One final note before the deck list, if you guys have any ideas for tech cards or any comments or concerns, you can leave them in the comment's section below.

Magnum Shield (Note: equip spell released in LTGY that depending on battle position increases that stat by the opposite. i.e  attacck added to defense)

Rank-Up Magic Barian's Force (side not about Barian"s Force: this can be used to rank up monsters one rank higher of the same type, however if you have a different monster on the field, you can still rank up. The xyz just won't have the additional effect. For example, ranking up a rank 4 warrior to a rank 5 like Utopia Ray V or C105. you can use any warrior such as blade armor ninja into comet cestus.)

2 Circle of the Fire Kings

At this point, we have two open spots in the extra deck for whatever you want, however I suggest a Gem-Knight Pearl and an Evilswarm Ouroboros until we get Number Hunters on Friday, and when we do get it, I would recommend Comics Hero King Arthur and CXyz: Comics Hero Legends Arthur.

You've seen my tech choices and my current deck list, not much else to talk about. If you have any ideas for other articles I can do about these guys leave a comment below. For example, an article about combos that can be done with Battlin' Boxers. Anyways (I'm saying that a lot, lol), that's gonna do it for me. So until next time duelist, play hard or go home!

Playing Limited Kaijudo Competitively
The Forbidden and Forgotten
Our Contributors