Underrated Cards In The 5 Mystics

You are here: Home / Underrated Cards In The 5 Mystics
Categories: Bobby Brake, Kaijudo
by Bobby Brake

The next set in Kaijudo, The 5 Mystics, was just released. It has been nice playing with cards from Invasion Earth, which was released back in November of 2013, but it is good to get a new fresh pool of cards to use. When a new set comes out the player base reacts a little strange. People are excited for new cards but they are afraid to use them because they are just used to what they have been using and know that it works. I am here to tell you that it is okay to new use cards. Kaijudo R&D developed these cards because they want to see them played. There are always 2-3 cards right off the bat that players know will be good and put them in their deck but there are 57 other cards in the set that have the potential to be great as well. Testing is very important when practicing for tournaments. Some of your tests may not work out and some may surprise you at how powerful they really are. All I am saying is do not count a card out just by looking at it. I am guilty of doing that in the past and I have missed out on some really great cards doing so. I am going to be looking at a few cards from The 5 Mystics that I think people have dismissed or looked over and talk about why I like them and how they have the potential to be a threat in the competitive scene.

This card is one of the two in The 5 Mystics that was designed at the Summer Championship 2013. I was on the team that 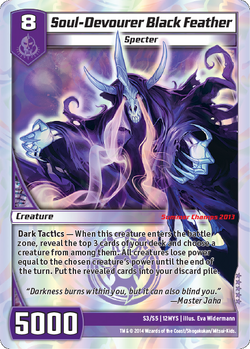 worked on this card. At the time we had no way to remove a massive amount of creatures so we wanted a card that did that, but was also balanced at the same time. The group decided that it should cost 6 mana and have 3000 power. We were able to make test cards of it and play each other to see how it worked. I was one of the only ones there who thought it was too powerful. Every game I played, whoever played this card banished every creature on the board on turn 6, including itself. It was nice to have massive removal but not on turn 6 and the fact that it had such a low power level and banished itself almost every time ruined it being a creature, it might as well have been a spell. R&D decided that it would be better at 8 cost with 5000 power. I am really happy they decided to do that. It makes the card more balanced and the power increase helps Black Feather actually stay in the battle zone. There is one card that makes Black Feather super powerful and that is Veil Slip. When you use Veil Slip to bring out Black Feather, it will return to your hand before resolving its ability. So it does not matter what the power level of the creature you pick is, Black Feather would not be banished. Some players have wrote this card off because of the mana cost being bumped but I still think it is a great card and is a lot of fun to play.

I know this does not seem like much with [ccProd]Lyra the Blazing Sun[/ccProd] in the game, but there will come a time when Lyra will go 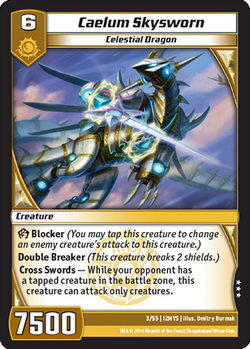 away and I think Caelum can step in its place. This is the first dragon that is also a blocker. Caelum really stood out to me the first time I saw it because dragons are known for mainly being aggressive, not defensive. It also has 7500 power which is way above average for creatures that cost 6 mana. It is stronger than most creatures in any aggressive deck. You can just play this card as a wall to stop your opponent from attacking you. Its only “weakness” is its Cross Swords ability. Which says, whenever your opponent has a tapped creature in the battle zone, this creature can only attack creatures. This drawback is perfectly fine with me because I normally attack creatures before I attack shields anyway. The only downside I can think of is if they have a creature with power greater than 7500. If you combine this card with [ccProd]General Skycrusher[/ccProd], that should not even be an issue since you will get an extra 3000 power from Skycrusher’s Command ability. I would try this card out in a dragon deck, maybe not as a 3 of but 1-2 is worth trying.

I really like the capability of this card. It seems like a bumped up version of [ccProd]Ghost 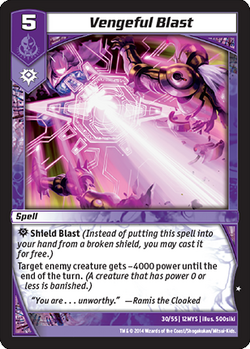 Bite[/ccProd], which it is, but the difference is this can banish creatures that [ccProd]Bone Blades[/ccProd] cannot. Not many people used Ghost Bite because the range of creatures it can hit, Bone Blades does the same, if not better. I think it is important to use this card because it can get rid of creatures like [ccProd]General Finbarr[/ccProd], Broodmother, and Steamtank Kryon. This is a nice removal Shield Blast for most 5 cost creatures and even some 6 cost ones. This is a great alternative to Tornado Flame if you do not want to use fire in your deck. I expect to see this splashed in LWD control and Kalima decks.

These are only a few of the powerful new cards from The 5 Mystics. Do not be afraid to try out new things. You never know how good something is until you use it. I hope the further into this KMC season we get the more people will innovate and make new decks. Using the same cards over and over gets really boring. Remember it is not all about winning, but having fun! The Circuit Series comes to Richmond, Virginia on April 26-27, 2014! Click the pic below for all the details.