Why Play Shaddolls for Ycs Chicago?

Following the conclusion of YCS Chicago we saw Nekroz once again take the most top spots and even the same two players face off in the final! I’d like to congratulate Steven De Lara on winning the event, and my good friends Edward Lee, Jovad Cruz, Don Wilinski, Dirk Wagner, Jordan Bermudez, and Cameron Neal on topping the event! In preparation for this event Jeff messaged me about playing Shaddolls instead of Nekroz, which was very intriguing to say the least. I personally love Shaddolls more than almost any other deck (outside of Frog Monarchs), which made it a very easy decision to pick up Shaddolls again for this event. Instead of yapping on without a deck list or substance to discuss I’ll start with that! 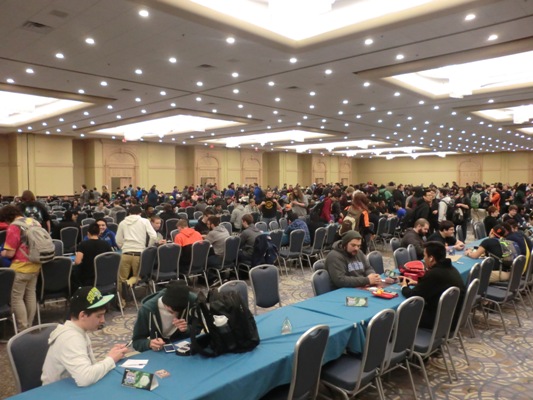 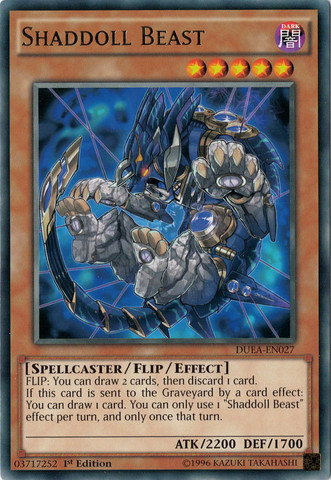 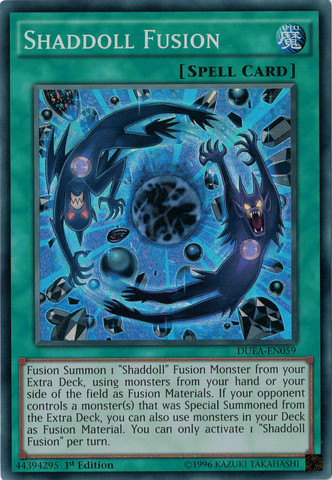 1 Leo, Keeper of the Sacred Tree 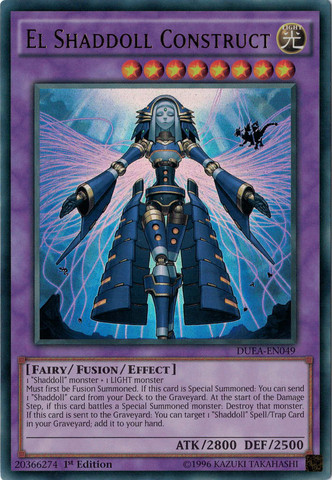 2 Mirror of the Ice Barrier

Example of searching opposite fusion spell:

Step Two: Use Construct’s effect and Squamata’s effect to send the opposite Fusion spell and Shaddoll core to the graveyard.

Step Three: Activate Shaddoll Core’s effect to retrieve the opposite fusion spell from your graveyard.

Re-visiting the topic of ratios of Shaddoll monsters, this should make much more since after seeing how we rank the individual Shaddolls. Squamata being a three of is of high importance because he is the best Shaddoll monster and doubles as a solid out to the Djinn lock as well as other floodgate monsters (Outside of Majesty’s Fiend). 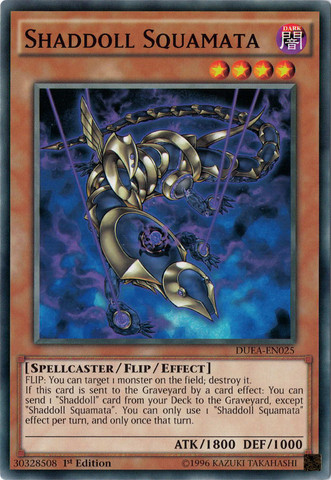 The biggest hub of confusion emulates from Shaddoll Falco being a three of in this deck. As previously stated Falco applies a lot of pressure while facedown on the field, because he can give you access to the effect of any Shaddoll monster in your graveyard. Previously two Falcos would suffice, but with the inclusion of Crush Card Virus into the deck, you’re required to utilize a third copy. Since you want to resolve Crush Card Virus you need a proper tribute and Falco is the easiest one to access in the entire deck because of cards like Squamata, Mathematician, and El Shaddoll Construct. With one Falco serving as a tribute for Crush Card Virus, you want to be able to utilize his actual effect as well, which means playing two more copies is integral to a solid Shaddoll deck in today’s metagame.

Shaddoll Hedgehog was played at two because of his innate ability to search the deck for any combo piece that may be required. Since Mistake is in the main deck at three, we opted to cut Shaddoll Hedgehog down to two.

Shaddoll Beast was only a two of because you never want to draw into him, and he doesn’t really contribute to playing around Trishula. Beast’s draw effect is still very powerful because it allows you to dig through your deck for solutions to on field problems.

Lastly, since Dragon is the worst Shaddoll monster in the squad he’s just a one of.

The Rest of the Monsters

The rest of the monsters in the deck are all used to solve issues and advance the deck’s gamestate. Mathematician was an easy three of because he makes every hand better and allows you to access any Shaddoll monster’s effect or powerful monsters like Felice and Pero Pero Cerberus. Felice, while a horrible monster to draw is fantastic in conjunction with Mathematician because Felice allows you to synchro for Arcanite Magician, Moonlight Rose Dragon, or Black Rose Dragon! Pero Pero Cerberus is particularly strong because it’s a solid solution to the Djinn lock, and an earth monster to fusion with.

Artifact Lancea and Effect Veiler both served as solutions to Trishula as well as other problem match-ups. The last monster we used was Black Luster Soldier – Envoy of the Beginning because he can win games on his own.

The only Shaddoll based spells in the deck were the fusions, which we decided to play less of than normal. We only used two Shaddoll Fusions and three El Shaddoll fusions because you lose more games to having too many fusions than too many monsters. When you have a clump of monsters you can at least protect yourself until you draw a fusion, but if you have too many spells you’re vulnerable to attacks and can’t protect yourself. Since the fusion spells invoke your power plays, we still wanted to use at least five, which meant we had to decide which would be better in the current metagame. El Shaddoll fusion is more reactive and plays around Trishula, while regular Shaddoll fusion doesn’t exhibit it’s true power unless your opponent made an error and left an extra deck monster on the field.

We opted to run one Raigeki and two copies of Dark Hole to out the Djinn and punish Nekroz players for overcommitting to the board. Since Shaddolls don’t force Nekroz players to clear their field, they don’t have to clear their board with Valkyrus. We did them a favor and cleared it ourselves with Dark Hole and Raigeki! We used Book of Moon as another solution to the Djinn as well as a general solid one of. The last spell was Soul Charge.

We found ourselves conflicted between using Call of the Haunted or Soul Charge when deciding which form of monster revival we wanted. Both Soul Charge and Call of the Haunted can be used to bring back monsters but only Soul Charge gave us the capability to create strong fields containing Felgrand and Durendal. Also you can use Soul charge to bring back El Shaddoll Construct and Shekhinaga to establish a near unbreakable field against Nekroz. While the life point cost could prove to be a huge detriment against decks that use Ring of Destruction, we decided that the decks we were actually worried about wouldn’t even be using Ring.

We main decked three copies of Mistake to autowin against Nekroz in game one scenarios, because most Nekroz players dropped Mystical Space Typhoon from the main deck. Vanity’s Emptiness was an easy one of trap to incorporate into the deck because it can win games on it’s own. Sinister Shadow games was played at two because we wanted more cards to help un-brick hands or tool-box for a Shaddoll effect. Shaddoll core has been a standard one of in Shaddoll decks for a very long time, and we didn’t really want to deviate away from its contribution. Core serves as additional fusion fodder and a way to recycle fusion spells, which makes it integral in any Shaddoll deck. The last trap we used was Crush Card Virus because of its ability to blow out Qliphort, Satellarknights, and most importantly Nekroz! It’s also incredibly easy to make Crush Card Virus a live card because of Shaddoll Falco’s ability to special summon himself when sent to the grave by Mathematician, Squamata, or Construct.

A huge reason as to why we wanted to play Shaddolls was that we didn’t have to worry about Nekroz of Valkyrus preventing us from Otking. Anytime you want to make a game push you just have to ensure that you have access to El Shaddoll fusion and Valkyrus becomes irrelevant to you. If you can get your opponent down to around 5000 life points you should be able to push through any adversity and finish off the game. 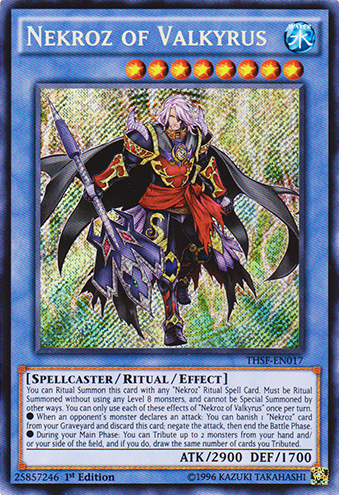 One of the biggest reasons for playing Shaddolls was that we had a multitude of answers the Djinn lock. Squamata, Dragon, Mathematician, Pero Pero Cerberus, Lancea, Book of Moon, Dark Hole, Effect Veiler and Raigeki give us a total of 16 outs to the Djinn lock. With this many answers we almost wanted to get Djinn locked because most of these solutions leave a Lavalval Chain face-up on the field, which is very convenient considering Shaddoll Fusion just about wins the game from that point.

Having not topped the event, I felt distraught and tried to understand what went wrong, because I was so very confident in the deck I took to the event. The biggest issue (outside of poor variance) was brick hands with this Shaddoll deck. Jeff did not encounter nearly as many brick hands but they did eventually contribute to him losing out the first round of Day Two. I plan to work to refine the build even more and take it to the upcoming Illinois Regional this weekend. If you have any more questions regarding the deck feel free to send me a message on Facebook or get in touch with me on Duelistgroundz. The next premier event I plan on attending is ARGCS Richmond on May 2nd-3rd. I hope to see a lot of you there. Until next time, Play Hard or Go Home!