The concept of card advantage plays an integral role in higher-level TCG play. Trading card games, by their very nature, reward you for having more cards in your hand than your opponent.

You can progress your board toward an unbeatable state, while your opponent is still scrounging for resources. You can amass counters in your hand to anything your opponent might attempt. You can dig for a combo piece.

Barring game-specific design space like Squadron Supreme in Vs. System or Hellbent in Magic, you're typically winning if you have more cards, because by extension, you have more options. Pretty simple stuff.

Card advantage in Kaijudo has a couple caveats, however.

Consider [ccProd]Logos Scan[/ccProd]. [ccProd]Logos Scan[/ccProd] is a very straightforward card; a "plus one" to your card advantage. You expend one card (the Scan), and add two to your hand, netting you an additional card. Card advantage without any legwork! I've seen Logos Scan likened to "Kaijudo's [ccProd]Pot of Greed[/ccProd]," and heard statements like "if you're playing Water, you play 3 of this card." You absolutely play three of this card in every deck where you use Water, right?

Let's examine what I mean by this by looking at some other TCGs.

In Yu-Gi-Oh!, [ccProd]Pot of Greed[/ccProd] is a Spell card that resolves and draws you two cards with no strings attached. Given the lack of a resource system in that game, it's no surprise as to why [ccProd]Pot of Greed[/ccProd] is an absolute staple in any format where it's legal; it will never be dead, and it will always be the best possible topdeck, since it draws you the card you would have drawn anyway, plus another card.

In Magic: The Gathering, control decks expending one or two mana to draw or filter through their libraries is a common occurrence. There is indeed a resource system in this game, but given the existence of Instant speed spells, there are a myriad of cards you can draw into that will let you interact with your opponent on their turn (provided you leave some lands untapped). Proper deckbuilding can allow you to amass card advantage while still stifling your opponent on their turn through counterspells or other Instants / activated abilities. 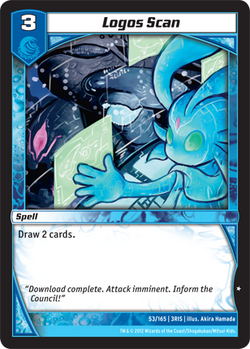 Kaijudo, on the other hand, is all about creatures. You can't win unless you break all five of your opponent's shields, and then attack directly one final time.

Your primary source of card advantage in Kaijudo should be from two-for-ones in the battle zone, not draw spells.

Spells are very important, just like in other games, but there's a catch: potent ones are usually costed such that you won't be able to both cast a spell and summon a creature in the same turn (until the very late stages of the game). Spells are not Instant speed either, of course, so any relevant removal spell that you draw into with a [ccProd]Logos Scan[/ccProd] or [ccProd]Spy Mission[/ccProd] will likely not be useful until the following turn. You could draw into a cheap creature and summon it on the same turn you cast [ccProd]Logos Scan[/ccProd], but even this simple play means you're in the midgame. Now, your weenie can be easily dispatched by cards like [ccProd]Lyra, the Blazing Sun[/ccProd].

Because Kaijudo is a game of creatures, if your opponent is "curving out" with appropriately costed creatures while you're deploying small roadblock creatures and drawing cards, you can easily find yourself behind. The "+1" you were able to generate via [ccProd]Logos Scan[/ccProd] or [ccProd]Spy Mission[/ccProd] might be irrelevant if you don't have enough mana to cast an additional card.

Every draw spell you cast has an opportunity cost -- namely, the fact that it wasn't a creature or removal spell instead.

Creatures are the backbone of your deck. The only removal effects in the game that can banish multiple creatures specifically relate to weenies. Knowing this, you will always get the most "bang for your buck" if you are either (a) curving out creatures every turn, or (b) ramping into a large enough amount of mana to where you can continually drop "finishers."

If you play a creature every single turn, and your opponent does not, then you are way ahead in the current gamestate. Your opponent will certainly have more cards in hand than you do, but unless he or she has enough mana to cast them all in turn before they are defeated, it's a moot point.

Of course, curving out perfectly is near impossible. Curving out implies expending exactly two cards from your hand each turn -- one card for the mana zone, and one card with cost equal to the total mana you can tap. If you're expending two cards per turn, but only drawing one per turn, you'll quickly empty your hand, and soon be faced with a decision to either play mana OR play a card. There's a reason why rush strategies usually cap themselves at 4 mana. Yes, they want to win early, but they also know that playing any higher cost creatures is unsustainable because of the dent it puts in their hand.

The solution, then, is to pull back onto the reins until such a time where it is deemed beneficial to curve out. 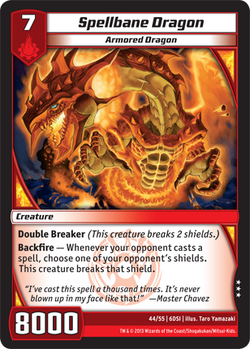 When things start inching toward the late game, however, the Greed Dragons deck is poised to curve out and fully utilize its mana. Lyra into a [ccProd]Spellbane Dragon[/ccProd] (or 7-cost removal spell) into a 9-drop Dragon is very typical, and [ccProd]Bottle of Wishes[/ccProd] can help to pseudo-curve out (or exceed the curve) if it hits. Conversely, if you're expending mana for [ccProd]Spy Mission[/ccProd] or [ccProd]Logos Scan[/ccProd] at this stage in the game, you will be leaving your opponent's creatures in play for a turn, and you might even be doubly punished for casting spells if [ccProd]Spellbane Dragon[/ccProd] is staring you down.

Would you classify your strategy as "midrange?" Do you cap your creature curve at 7 or 8? If so, then it's probably a bad idea to run [ccProd]Logos Scan[/ccProd] right now.

Because of the existence of Lyra and Andromeda, midrange decks are on a clock like never before. If you can't put your opponent into the abyss before they're able to hardcast their boss Dragons, then you're in deep trouble; the snowball starts rolling downhill right toward your face. So if you know you need to be decisive with your aggression, is it really worthwhile to spend your turn 3 or 4 simply drawing 2 cards? If your opponent went first, they may be able to lock down your subsequent drop with Lyra before you're even able to break more than a shield or two. Now you can't fight fair with their boss Dragons, and any remaining copies of [ccProd]Logos Scan[/ccProd] in your deck are too little too late.

If you're playing Greed Dragons, should you be running [ccProd]Logos Scan[/ccProd] right now? Absolutely not. It's the same reason Greed Dragons forgoes blockers. You want to be getting the most out of your mana each turn and only putting stock into mid/lategame threats, removal, and acceleration for said threats. Spells without Shield Blast in general will have a tough time finding their way into a Greed Dragons deck.

You may hear this bit of slang thrown about and consider it callous, but it's 100% true. If [ccProd]Logos Scan[/ccProd] or [ccProd]Spy Mission[/ccProd] don't yield "real cards," then they haven't really accomplished anything. This goes back to my previous statement about card advantage only mattering in certain contexts.

The smallest opportunity cost for a hardcasted [ccProd]Logos Scan[/ccProd] is on turn 3. The best creatures in the game right now live on the top end of the curve, so if you miss out on your [ccProd]Aqua Seneschal[/ccProd] beatdown, it's not catastrophic like it might have been a few sets ago. However, in order to maximize your chances of hitting it on 3, you pretty much need to include the full playset. Which means you'll be drawing [ccProd]Logos Scan[/ccProd] in the late game, where it has the highest opportunity cost. 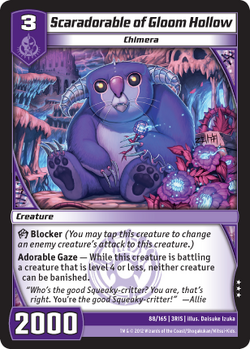 Let's say you do opt to cast a [ccProd]Logos Scan[/ccProd] on turn 5 or later. If you draw into something like [ccProd]Aqua Strider[/ccProd] or [ccProd]Scaradorable of Gloom Hollow[/ccProd] in the WDL or Greed matchups, you haven't really progressed your standing in the game, even though you got yourself a "+1." Those cards don't do anything. "Woo wee! I drew yet another [ccProd]Bone Blades[/ccProd]!"

Let's not even get into the losing battle you're fighting if you're casting [ccProd]Logos Scan[/ccProd] against a ramp deck (a la Greed 53) that just aims to turn 5/6 [ccProd]Skull Shatter[/ccProd] you. You're not getting anywhere.

An additional theoretical card means nothing unless it's sure to impact the state of the battle zone.

I hear many players throwing out terms like "it's a +1" as sole justification for a card's inclusion. This is simply incorrect. We all inherently understand that we'd rather have more cards in hand than our opponent, but at what cost? 3 or 4 mana seems like nothing, but when you think about the deckbuilding and matchup concessions you're making just to draw 2 cards, you should be alarmed.

Yes, [ccProd]King Tritonus[/ccProd] is a "+5." But is that the sole reason to play him? Of course not -- he costs 10! His 15000 power and Constrict ability, on the other hand, are the attributes that should make your ears perk up. Yes, drawing that many cards is extremely important if you're trying to juice yourself back up after ramping, but it's merely one benefit (albeit an important one). What 5 cards are you going to be drawing into for your 10 mana? I hope it's other 9+ drops and some "real" removal spells, or it won't matter.

The goal of this article is to put card advantage in Kaijudo into the proper context. By no means is [ccProd]Logos Scan[/ccProd] a bad card -- it's very solid, in fact. But a simple "+1" does not a staple make. Make sure to diligently analyze the decks that are winning, and make sure that every card in your deck is being utilized to its fullest.