Cardfight! Vanguard remains a relatively new TCG in the US, but its popularity could very likely fool you into thinking otherwise. The game’s creator, Bushiroad, has no doubt enjoyed watching their greatest success expand tremendously in western markets over the last year and a half. The player base outside of Singapore has latched on to Vanguard’s simplistic-yet-elegant design; one that is a far cry from more complicated games such as Yu-Gi-Oh! and Magic: The Gathering. Featuring only two major card types—and very few differences between them—Vanguard is relatively easy to learn and quick to pick up. Deck design is incredibly straightforward as Clan-based archetypes often build themselves. Yet, within any given Clan there are often a multitude of play styles to experiment with.

Still, Vanguard isn't without its faults. The cost of simplicity is linearity: a direct and basic play progression is sometimes just as effective as a well thought-out indirect approach. As a result, one of the biggest criticisms of the game is that it’s too linear. There’s little room for innovation when a combination of stringent deck construction rules, limited meaningful card effects, and minimal card types have a stranglehold on creativity. In many cases Vanguard plays like the card game War; everything is an attacker and sheer numbers win every time. For some this is hugely off-putting. Complicated play sequences of other TCGs seem to highlight how simplistic Vanguard actually is. In fact, it can be frustrating for new players to find their niche when coming from another game.

Linearity was something I immediately knew I’d have to overcome when I started playing Vanguard. If I didn't, I could see myself dropping the game before I even had a chance to see all it had to offer. My first experience with the Vanguard was with the Clan Gold Paladins...which typically play exactly like I described above. Despite being one of the better decks at the time I wasn't enjoying the act of playing it. Paladins were pure aggression and I was looking for something that wasn't so direct. Something that would make me think before each move. That deck ended up being Angel Feathers.

Every Clan in Vanguard has some sort of game mechanic or ‘gimmick’ that makes them stand out from the rest of the field. Bermuda Triangle features cards that return Units from the field to the hand; Kagero allows its pilot to retire opposing cards; and even the new Link Joker can “bind” Units by flipping them face-down. Each Clan’s unique mechanics offer different ways to play the game. Some of these abilities aren't explored to their fullest, and others are lost on players who just want to hit high numbers. Angel Feathers, on the other hand, feature a mechanic that helps push the boundaries of the tactical possibilities in Vanguard. Let’s take a look at the damage swap. 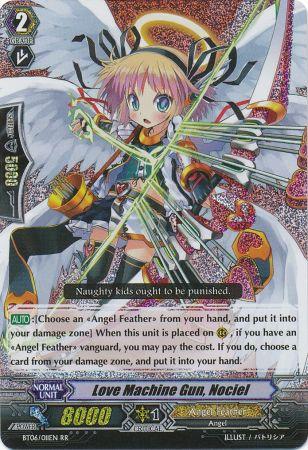 A damage swap occurs when a card is placed into the Damage Zone, followed by another card being removed. The swap that Angel Feathers are known for involves switching a card in your hand and a card in the Damage Zone. Love Machine Gun, Nociel, Battle Cupid, Nociel, and Chief Nurse Shamsiel are notable Units that carry this ability. Each of them allows you to make a swap when their conditions are met. This allows you to do two things: First, you can unflip damage by swapping a face-down card for a new one from your hand. This essentially allows you to circumvent counter blast costs in many cases. Second, you can use your Damage Zone as a resource pool, and that has a whole suite of applications.

Using the Damage Zone as a ‘second hand’ of sorts is an immediately enticing prospect. As long as you have a swapper available you have access to potentially five additional cards. Need a Unit to guard with? Grab a Sentinel or a Trigger. Looking for an extra boost to a column? Fetch a 7k or 8k Grade 1. Getting the card you need in a pinch is hugely beneficial, but they’re certainly not free. You’ll have to give up a card in your hand to make the swap. So what do you get rid of? Draw Triggers are a good option as their 5k shield makes them a bit weak when defending. Trading them out for Units 10k shields in your Damage Zone lets you circumvent the defining characteristic of Draw Triggers: their low Shield is meant to compensate for the extra card they give you. As a result you’re able to net additional cards and turn them into more desirable Units in your Damage Zone.

Hand correction via damage swapping provides a massive amount of consistency to Angel Feathers, although running cards with this ability will bring your speed down a bit. This Clan will generally play defensively; opting to grind the opponent out of cards rather than win outright in a game of pure numbers. Picking and choosing the best Units from your Damage Zone while sending away less desirable ones gives you the power to set up late-game fields with relative ease. Previous Vanguards like Circular Saw, Kiriel never developed the Angel Feather strategy to the point where damage swapping was truly meaningful. Chief Nurse, Shamsiel set out to change that, and allowed players to readjust their hands every time it made an attack. But it’s Crimson Impact, Metatron that has brought out the best of what Angel Feathers have to offer. Its ability to swap out Rear Guards puts it on an entirely different level.

There’s one more piece of the puzzle that I haven’t touched on yet, and that’s the newly-released Candle Celestial, Sariel. While the Nociel family is swapping out cards in the hand, and Metatron is moving Units on the field, Sariel is able to fetch Angel Feathers from the deck and place them in the Damage Zone. I can’t overstate how important this is. With Sariel and any damage swapping Unit, every Angel Feather in your deck becomes accessible on demand. Manipulating your cards at this level opens up a massive array of tactical options. Your plays become increasingly varied as you experiment with abilities that let you add and reclaim Units from anywhere that isn't the Drop Zone.

Describing the Angel Feather strategy as linear is painfully inaccurate. For that reason I use the term ‘lateral’ to describe their play style. The deck goes well beyond the straightforward approaches used by more aggressive clans, and implements its unique mechanic to a far greater degree. The Damage Zone represents a hub that your cards can move in and out of. Controlling traffic through this area requires a fair bit of foresight. For example: let’s say you’re at five damage and you know your opponent will be attacking with a 30k+ column next turn. You need a Sentinel, but all of your copies are either in your deck or Drop Zone. What do you do? One option is to use Sariel to send a Pure Keeper, Requiel from the deck to the Damage Zone, then follow up with a damage swap to add Requiel to your hand. Playing out of the Damage Zone lets you approach any situation from any number of angles. Your ability to solve problems and deal with threats increases drastically as you distance yourself from linear tactics and open up more avenues to victory. This is the real power of the damage swap mechanic: a shift from the linear and simplistic strategies to ones that are lateral and dynamic. 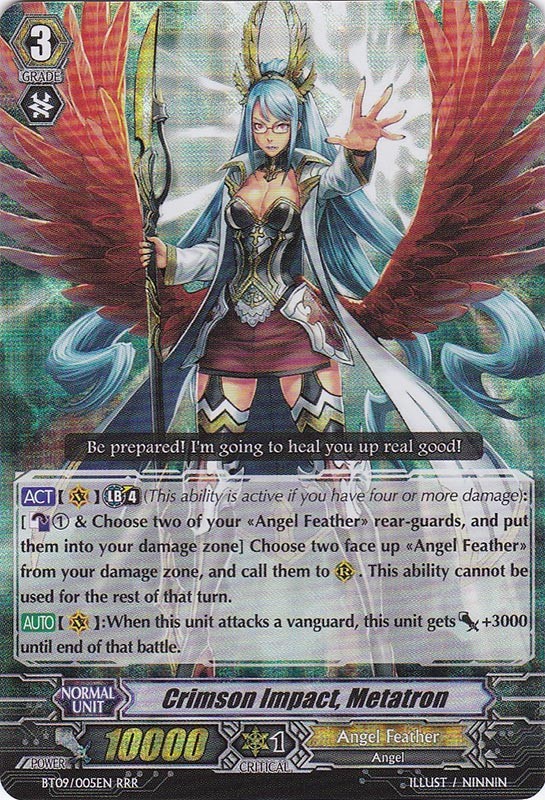 As good as the damage swap ability is, it wouldn't be used if it wasn't successful. Thankfully there’s more than enough synergy among other Angel Feather Units to make that possible. Placing cards in the Damage Zone provides extra power to Thousand and Million Ray Pegasus, and combining the two with Metatron’s Limit Break results in absurdly powerful columns. Better yet: these set-ups are easily made thanks to cards like Sariel, Nociel, and Metatron. The damage swap mechanic is pervasive throughout the Angel Feather Clan, and its impact is greatest when combined with cards that directly benefit from it.

Not only does this clan feature a lateral play style, but it also contains a particularly ability-driven strategy. So what do I mean by that? Angel Feathers make plays on the basis of their abilities. Nearly every deck in Vanguard is focused on creating strong fields, boosting their cards even higher with abilities, and hopefully making a successful attack on opposing Units. How they accomplish this varies, but few are using abilities as frequently or as effectively as Angels. Rather than relegate card effects to the battle phase, Angel Feathers manipulate the Damage Zone during all parts of the match. Your field and hand are the very much the result of how you decide to use this powerful mechanic. There are numerous TCGs were stats take a backseat to effects, and Angel Feathers are about the closest Vanguard has come to having a similar differentiation.

Finding Your ‘Niche’ In Vanguard

Angel Feathers initially gained my attention with their art, but I ended up staying with them because of the damage swap mechanic. Finding non-linear strategies in Vanguard is actually a lot easier than you might think, and it’s a great way to get players of more complex TCGs into the game. Vanguard Units are frequently basic and uninteresting, but the way you manipulate them doesn't have to be boring. Calling Rear Guards from the hand not your style? Try a deck that focuses on calling them from the Drop Zone. Many players who end up disappointed with the game were playing overly-straightforward strategies that required little-to-no thinking. If you’re planning on getting your friends into the game, consider starting them off with a deck that has a more lateral play style. It might end up being that perfect mixture of complexity and ability-driven game play they've been looking for.

Until next time then.

As a gamer I've been playing TCGs since Yu-Gi-Oh! initially came to America. In the last two years I've made a point of picking up more card games, including Cardfight! Vanguard, Weiß Schwarz, and Magic: The Gathering. As a writer I've released weekly content non-stop for the last year, and I've been writing more infrequently for three years before that. Sharing insight, teaching, and opening up discussion on games and strategy are all a huge source of enjoyment for me. The only thing better than learning something new, is sharing that knowledge with others.