You are here: Home / (ARG Contest Article) An Inside Look to Nova Grapplers- A Deck List and Explanation
Categories: Cardfight Vanguard
by Chad Walsh What's up Cardfighters? I'm Chad and this will be my first article. I've been playing Cardfight Vanguard for about 6 months now and I have to say, my favorite clan thus far into the game is the Nova Grapplers by far. Now, I'm not here to debate how good or bad a clan is, but what I am here to talk about is the importance of stand triggers in a Nova Grappler deck and what the deck is meant to do. Before I begin to discuss this, Let me show you my deck List. Keep in mind the fact that the deck revolves around the Beast Deity sub-clan from Breaker of Limits which will be getting some more support within the next year or so. Without further adieu, Beast Deity Nova Grapplers:

A Brief Introduction to Beast Deities

You might have played these guys or played against them, but if not I'm about to explain what the deck does. If you already know what they do, then this will be a nice refresher. Beast Deities, more specifically Nova Grapplers, are meant to control the field with big units and overpower the opponent, and when they get a chance they can stand their rear guard units. That's with the help of Stand Triggers and skills of course. If you haven't noticed, there are no critical triggers in the deck because we needed the extra room for stand triggers, which is part of our main focus. If you are focusing on the Beast Deity aspect, like I've mentioned millions of times already, one of your main ways of standing will be Azure Dragon, if you don't know his effect, here it is: 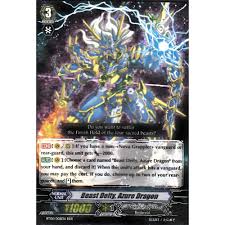 [CONT] (VC/RC): If you have a non-«Nova Grappler» vanguard or rear-guard, this unit gets [Power]-2000.
[AUTO](VC): [Choose a card named "Beast Deity, Azure Dragon" from your hand, and discard it] When this unit's attack hits a vanguard, you may pay the cost. If you do, choose up to two of your rear-guards, and [Stand] them.

To Sum it up, his first effect reduces his power, if there are no other nova grapplers on your board, and his second ability allows you to discard another copy of himself to stand two more units. The second effect can also be called a persona blast because it discards another copy of itself as a cost. Anyways, enough info about the deck, let’s get onto the main topic.

To Stand or Not To Stand

As I mentioned before, the purpose of the deck is to control the board and over power your opponent, and you do that by using not only triggers but Azure Dragon's effect, and of course your monsters with lots of power. The most important thing to know is when to use those stand triggers or effects.  The best possible time to use them is of course when your opponent has very few cards in hand, but there are several other scenarios that work as well. For example, let's say your opponent is using a Narukami deck (which is the deck I entered the game with before moving to Nova Grappler) and their board consists of a single Thunder Break Dragon and a Red River Dragoon, and you have a board of Azure Dragon with a Beast Deity, Scarlet Bird behind it, and a King of Swords with a Queen of Heart in a rear guard behind him. Let’s suppose your opponent has 3 cards in hand and you have 4.

Option 2: You attack with King boosted by queen, and the opponent guards. Now you can attack with Azure Dragon, but they use a perfect guard. This is probably your worst case scenario, but on the positive side, your opponent now has no cards in their hand to start their turn.

So I just gave you two options of what to do when your opponent has 3 cards in hand, but what if they have 6 or 7? Let’s assume the fields are the same as last time, but the hands have changed to your opponent having 7 and you only have 4.

Option 1: Attack with King boosted by queen, and deal damage after they use a few cards. attack with azure dragon, and  if they have at least two cards left, you may not wish to use Azure dragon's effect, just in case there is a perfect guard in their hand, but that might also be the perfect opportunity to make them waste it. It's really up to the player.

Before I move onto Option 2, let’s assume that player one has 4 damage and player 2 has 5.

Option two:  Player 1 attacks with king boosted by queen, and Player 2 damage checks a heal trigger, the score is 4 to 4 now, if the next attack doesn't go through, the turn ends and player 2 has a chance to win,  however if the attack does go through, you have a choice to activate the effect, but you might not want to because  you want to use it to save yourself on the following turn  in case the opponent can overpower you and try to take the advantage.

What you do in these situations really depends on the situation and what your opponent has in his or her hand.

In Billy Brake's most recent yugioh article covering how people were misplaying mystical space typhoon he mentioned one key thing that also applies to cardfights, "Assess the situation". As Billy explains, this pretty much means keep a close eye on the field and consider all possibilities of what cards your opponent could have, and consider when the right time is to play that certain card. As an avid yugioh and cardfight vanguard player, when I read Billy's article to heart, it helped me understand so much and I believe this can help people in vanguard as well.  The key to using any game mechanic, but I believe that using this mechanic you have to really consider timing and assess the situation.  Nova Grapplers are a very interesting clan and if you haven't played or played against them, give it a shot. The Deck is so much fun and fairly simple to run.

Thanks for reading, if you have any comments or questions just leave them in the comments below. I hope to be back soon with another article, , so ladies and gents play those card games like you have never before and remember play hard or go home! (Always wanted to say that.)

The Anatomy of the Competitive Kaijudo Player
“The Dating Game” – Tour Guide Edition!
Our Contributors