You are here: Home / Behind the Draft: Kaijudo Championship
Categories: Bobby Brake, Kaijudo
by Bobby Brake

Drafting at the 2014 Kaijudo Summer Championship was a new experience for many players, including myself. I have never drafted at a competitive level before, I have only done casual drafts at my local store. There are very strict rules you have to follow while drafting at a competitive event. The main one is being restricted by a time limit you have to pick each card. You start off with having 45 seconds to make your first pick and then 40 seconds for the second pick and time decreases after each pick, eventually down to 5 seconds for the last couple picks. The time limit added a little bit of stress because when they announced 5 seconds left, you had to make your decision real quick.

Carl Reddish was a commentator for the event and decided to stand behind me and follow my draft picks. He almost had more pressure than me because after I finally picked a card, he only had seconds to see what I picked and write it down, and also write other good cards in the pack I could have chosen. This was great information that he was able to use to help when he commentated on my round 1 feature match. It also has given me the chance to write this article about each of my picks and why I chose them. He was kind enough to give me the paper he wrote all my picks on. I am going to go through each pack and show the order I picked cards and talk a about why I chose some of the cards The cards in parentheses are other cards in the pack that I decided not to take.

I actually debated between the two cards until the last 5 seconds of the pick. I was strongly leaning towards Boulderfist, but I knew 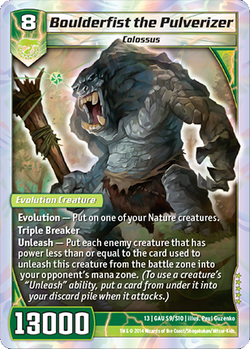 [ccProd]Charging Greatclaw[/ccProd] on turn 4 would give me a huge advantage in the battle zone and mana zone and was not sure if hoping to reach 8 mana and having bait would be viable. The ultimate factor was if I get other strong nature creatures like [ccProd]Bronze-Arm Gladiator[/ccProd], I could use Boulderfist as a board wipe, which is extremely powerful in limited so Boulderfist it is!

In draft the 1st type of card I normally go after is Evolution creatures. They simply win games by overwhelming your opponent. I could have gone with Sprout as a blast and help me ramp to Boulderfist, but it definitely was not a priority as a 2nd pick. Getting these 2 evos right of the bat gave me an indication I might want to build a Light/Nature deck.

This is the hard part of drafts. You get a shiny card and your gut tells you that you want it but, you have to analyze and see if it will help you in the long run. It is hard to pass up a Super Rare as a 3rd pick, but I have drafted with Bolshack before and it is not very efficient. Once the game reaches turn 9, it is already over or close to it. Playing a creature for 9 mana is very difficult to do in Quest for the Gauntlet drafting because it is so fast paced with the evos. The pack had another great evo for my little strategy going on, Barbed Crusher. Getting this guy out on turn 5 is amazing, since he is stronger than most 5 cost creatures. Starting off strong with 3 strong evolutions felt pretty good.

I already had evos, now it is important that I had bait for them, there really was not that many good Light or Nature cards in this pack so I just took Laser Drone to have bait for Sunstorm.

I know that Eye of Inquisition is extremely powerful in draft so I took it and thought maybe I could use it if I wanted to splash darkness in, but I mainly took it because I did not want anyone else to use it. I didn’t take Eye Spy yet because I had no blockers.

This is the card I was wanted to combo with Boulderfist so I instantly took it. He is pretty much invincible during your opponents turn, or so I thought, Ricky Gross sure did prove me wrong with a Torhelm with 11000 power!

This was a snap pick for me because it is a very good card in draft, actually lost to it 3 times during the Champs draft rounds.

I was very surprised to see this card so late in the pack. I think it is the best shield blast creature to get in draft, besides The Arbiter of course. I snap took this card.

Another one?!? Thank you to whoever is not picking Light!

I love my evos and my Light bait was looking pretty good.

Not the greatest Shield Blast, but could come in handy.

Wasn’t much else left

Not that bad of a last card to get. It could actually work quite well with my deck.

Here are the first 14 cards I chose from the first pack in draft.

I started off strong in the light section, in the 2nd pack I knew I needed to focus on Nature and getting some bait for me evos. From what I could tell, it looked like that would not be that much of an issue because it seemed only 1-2 people were picking nature in my pod.

This is the exact card I was hoping for. He is the best bait for all of my Nature Evolutions. Sky Shark is really good in draft so I sort of wanted to hate draft it, but I needed this Bronze-Arm really bad.

This was a snap pick for me. I got really excited to see this card passed to me. Probably one of the best cards for my deck. This also told me that the person passing to me was most likely not picking any Light and Nature cards. 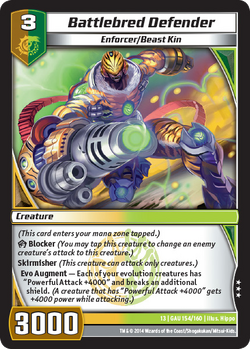 I actually really like Violet Puffer in draft. Losing a card in your hand is not that big of a deal when you can play Barbed Crusher of turn 4. It seemed like everything was just going right for me in this 2nd pack. Spire Keeper was tough to pass on, but I needed nature creatures more.

I just kept getting passed exactly what I was looking for, it was great! It did hurt a little not getting Strobe Flash, but I was too excited about the best Nature creatures to care.

After getting so many good nature creatures, I felt like picking up a Light creature. Ironwill is good on turn 2, but Shield Blast creatures can be very powerful so I went with Flux Drone because it can make a creature a blocker and attack.

A third Hover-Talon? Sure why not!

I did not have that many turn 2 plays so I picked Weaver to help me with early plays and have better bait for my Battlesworn Seer.

Probably the best blocker in draft, had to pick it.

Do not really like this guy but it was all I could use in the pack and I guess its bait.

Hope I draw both of them together!

Just picked up some more bait so lets get another one of these guys.

Not sure how I got this so late, but I prefer this over Stratus Dart any day.

Nothing else to pick really.

Here is what my picks look like after the first 2 packs (I am only going to post the relevant cards):

Looked like I had my Light section pretty much covered, I made some good progress with nature, but still needed more. One pack left, let’s see how much nature I can get!

I wanted to take Ardu Ranger because he is also great bait for evos, but I felt like having 2 Gladiators would really help out in the 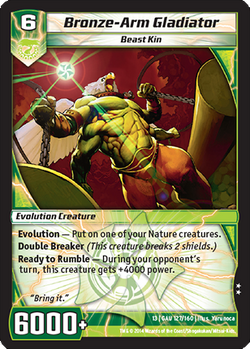 This was very hard for me. Blinder Beetle and Sunstorm are both great cards, but with my nature section lacking and just picking up another Gladiator, I had to go with the Bronze-Arm Tribe to help me get to those Nature evos.

He is decent bait and can help out my little creatures.

Literally the best card in the pack.

There is never a problem with too many evos!

It seems like almost every small Nature creature is great bait for the evos. I was happy to take this card, he can be very powerful in draft.

Crazy that this was a 7th pick, I guess people really weren’t going for Light.

Go for broke! (I decided not to use 3 in my deck in the end)

I actually like Allure as a Shield Blast. If I have a giant evo in my battle zone tapped, and my opponent is going for game, this card can save me. It is one of the most underrated cards in my opinion.

Eh is a nature card…

Here is the final list of relevant cards that I picked from the draft at the Summer Championship.

I was pretty pleased with all the cards I picked from the Draft. This would be my first time using Light/Nature in a limited format, but the cards I got looked pretty solid. The deck performed great in the round 1 feature match against Water/Fire Aggro, but sadly lost out to a Strobe Flash and Lurking Skull Cutter round 2 and a 11000 power Torhelm in round 3. All the games I played in draft were great and it was awesome to see new draft strategies from other players.

A huge shout out to Carl Reddish for making this article possible! I think being able to see each card a person drafts and their view point on why they picked that card is something unique and few people get a chance to see. Please let me know if you like this type of article and I can do some more, and better quality ones when I draft at my local card shop. Drafting is an exciting new way to play Kaijudo. It also helps you figure out some card combos you may not have seen before. Remember it’s not all about winning, but having fun! The Circuit Series comes to historic Philadelphia, Pennsylvania this weekend June 28-29, 2014!