Hello readers, I’m Conner Morgan. I’m a member of Team Tapped Out, the 1st place team in the North American Team League National Championships. This will be my 2nd article for ARG! I’ve started playing Cardfight!! Vanguard when the game first launched in North America and I’ve played actively since. I have a lot of experience as well as insight in the game when it comes to playing and deck building and I’m happy to be a part of the #1 underdog TCG!

As you all know, the newest booster set Seal Dragons Unleashed was released on October 25th and brings a lot of new mechanics to the English Cardfight!! Vanguard scene. It is the first core booster set (not counting Extra Booster 6: Dazzling Divas) to introduce the "Break Ride" mechanic, which typically activates a very powerful skill when another Grade 3 rides over a Break Ride unit upon reaching Limit Break. Within this set, the Seal Dragons archetype for Kagero has launched, revamping a classic clan into something new. So what can these units do to impact the metagame consisting of powerful decks such as "The Blood", "Scarlet Witch, Coco", "Solitary Liberator, Gancelot" and many others? Read on to find out!

The much anticipated Dauntless Drive Dragon is one of the most hyped cards coming out of the gates for this booster set and it's easy to see why! Kagero hasn't seen much support since Awakening of Twin Blades which came out at the beginning of 2013. With a skill that allows a re-standing vanguard as well as keeping the 10k power that is standard of break ride skills, it's easy to see how this card would attract a lot of attention. Many players have decided to combine this card with Dragonic Overlord the End (DOTE for short) for a potential of three vanguard attacks in the turn! This has three problems though, one being that the Dauntless/DOTE  strategy would require you to wait until Limit Break to activate this skill, which goes against what DOTE is known for in terms of immense early pressure. You also loose the benefits of the stagnant 13k from a cross ride, which Kagero is also known for being defensive. Lastly, Dauntless Drive Dragon's re-standing skill MUST be applied first, meaning that playing against the break ride is simple. You would just take the first attack from DOTE on the turn it break rides,  have it re-stand with Dauntless Drive Dragon's skill and use a Perfect Guard when DOTE attacks again. By the time your opponent reaches Limit Break, you have plenty of time to draw into or Drive Check into one of your four Perfect Guard units, and it is the only major play that version of Kagero is capable of. Instead, might I suggest combining it with another new Kagero card shown below.... 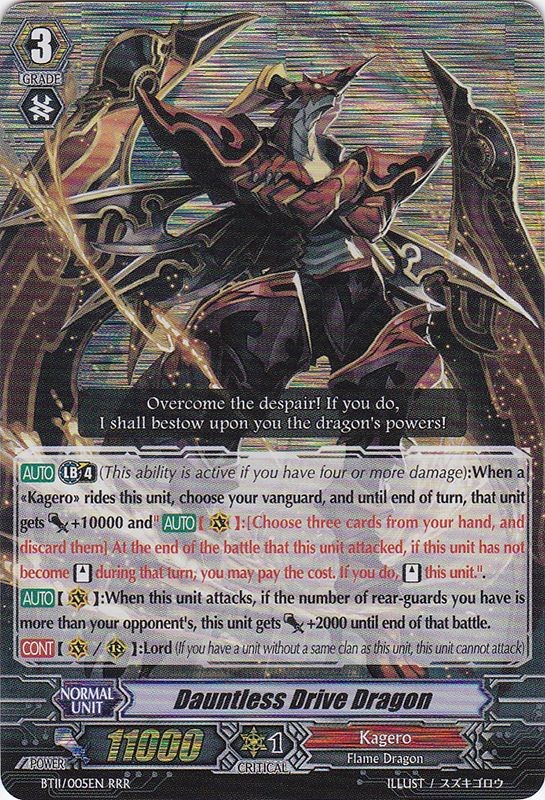 Hellfire Seal Dragon, Blockade Inferno is the cover card of this booster set, and it sports a very powerful and interesting skill. For a Counterblast of two, it retires all your opponent's Grade 2 rear-guards and gains 10k power for the turn. Simple enough, a moderate cost, and it's very effective. Essentially this card discourages your opponent from calling Grade 2's to the rear-guard circle, and instead they would be more inclined to call Grade 3's. That is okay in our books, since those are Grade 3's that can't intercept, can't be used for Break Rides anymore, and can't be discarded with Perfect Guards. More often then not though, they'll be forced to call Grade 2's regardless or else not deal as many attacks towards you, and that's where we can gain advantage off Blockade Inferno's skill. It is also a cross ride unit that can ride on top of the classic Seal Dragon, Blockade for a stagnant 13k power. However, I would suggest that this card also is a much stronger mix with Dauntless Drive Dragon than DOTE would be, since it is capable of accomplishing more on the following turn rather than only having a big play on the Break Ride turn. The key to this is the additional 10k power Blockade Inferno gets upon activating its skill. Simply put,  activate Blockade Inferno's Limit Break the turn after you break ride, and that's two turns that you will be swinging with 21k power by itself. If you manage your Counterblasts effectively, you can do this AGAIN on the 3rd turn! 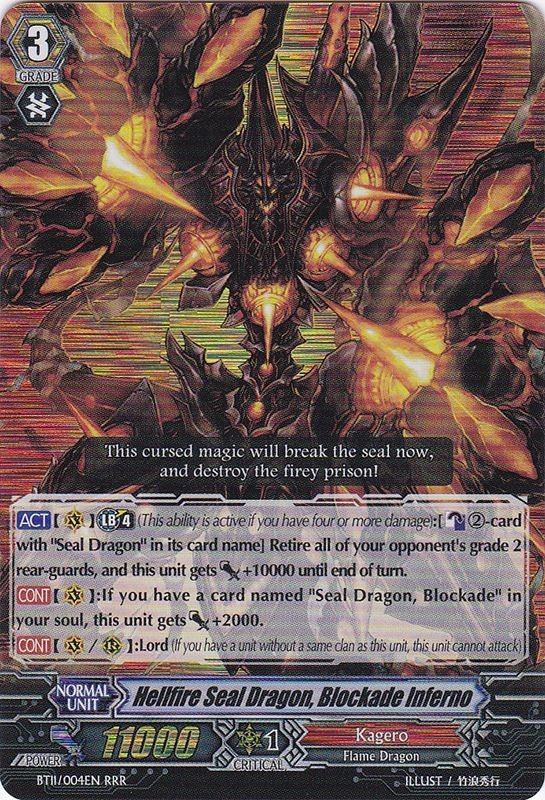 So what else did Kagero get? Well my avid, inquisitive reader, there is a new toy known as Seal Dragon, Corduroy. For a very cheap cost of Counterblast 1, this 9k Grade 2 retires any rear-guard on your opponent's side of the field. The catch however is that your opponent gets to look at the top 4 cards of the deck, and call a Grade 2 to the field. This is okay in our books for a few reasons. For one, if we are going to retire all the Grade 2's with Blockade Inferno's skill anyway, the Grade 2 that they get to call doesn't impact anything. For two, there's a pretty decent chance that your opponent won't even see a Grade 2 upon checking the top 4 cards. Lastly, if they have a full field and we retire the back row unit behind the vanguard, there is no place for the Grade 2 to go anyway! In the worst case scenario, we only wasted 1 Counterblast which isn't a big deal. Another thing to note is that this could end up hurting you in certain matchups. For example, if you used this skill against Royal Paladin and your opponent hit a Blaster Blade off the top 4, that could just interrupt your field altogether through Blaster Blade's on-call Counterblast. One would have to understand the match-up as well as see which Grade 2's have been removed from the deck so far. Overall though, this card greatly outclasses the classic Berserk Dragon and is a welcome unit to the Seal Dragons deck. 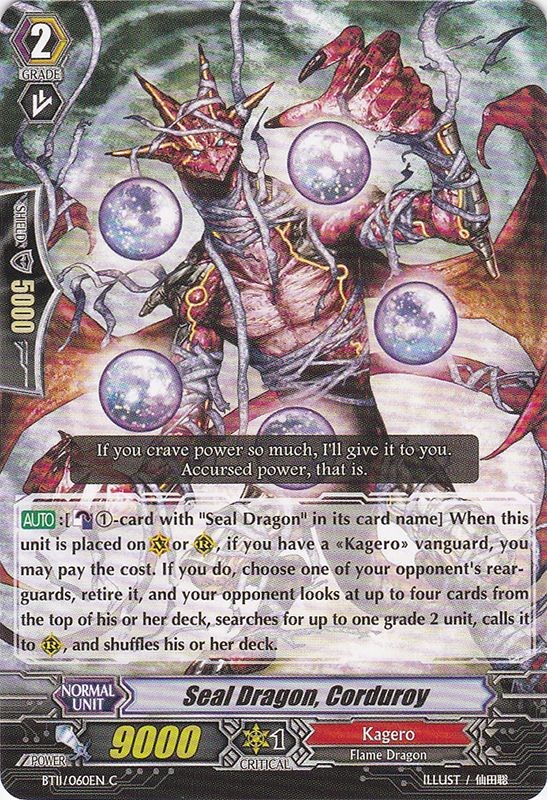 So is there a catch to using these awesome Seal Dragon units? Unfortunately yes, and that is with their special Counterblasts. To activate Corduroy or Blockade Inferno's skill, we can only Counterblast units with Seal Dragon in their name. This means that we have to keep the number of non-Seal Dragon Kagero units in our deck to a minimum for consistency reasons. So how would a Seal Dragon deck look like? Take a look below!

This is a pretty solid skeleton to go off of, considering that your Seal Dragon Grade 1's and 2's are very limited. There are some older Kagero Grade 1's to allow us to have the most versatility with Lizard Soldier, Conroe, but it is entirely up to you if you choose to use them. You may also choose to cut a couple copies of Dauntless Drive Dragon if you would prefer to cross ride over the original Seal Dragon, Blockade. Give the deck a try though, it's very effective and I definitely see Seal Dragons as a powerful contender going into the new Break Ride era of Cardfight!! Vanguard!

Why Dragunity is Better than Dragons
Dauntless DOTE, is it worth the hype?
Our Contributors