Burning Into the Shadows — Burning Abyss

The new set Duelist Alliance introduces many new archetypes to the Yugioh world such as the much hyped Shaddolls, Yang Zings, and the deck that I want to talk about today, Burning Abyss. Burning Abyss is a completely new archetype. It has started off with five cards, but we’ll only talk about the monsters, as the trap card is not worth running. Before I can tell you why I think this deck is so powerful, we need to be familiarized with the cards.

Dante is nothing to laugh at as far as boss monsters go, given that it’s a generic rank 3. It can be made quite easily with just a Tour Guide searching any Burning Abyss monster from your deck. Its effect not only generates advantage by detaching and milling Burning Abyss monsters, it can also boost its attack to 2500, a respectable milestone for a rank 3. But Dante is far superior to Leviathan Dragon, the other rank 3 that hits this milestone – it switches itself to defense position after attacking, and its defense is also 2500. This leaves it protected from destruction by battle with most easily dropped monsters, as well as monster effects such as Number 101: Silent Honor ARK. On top of all that, Dante is a floater. As soon as it hits the graveyard for any reason, you can add back a Burning Abyss monster to your hand.

Cir is not a card that’s particularly useful during the early-game, but it forms one of the key strategies of this deck: looping Dante. If Cir hits the grave, it can special summon Dante back, which in turn can add Cir to your hand when it dies.

Graff is a tremendously useful card to get your engine going, especially when you have a card like Phoenix Wing Wind Blast to pitch it for. You will either be grabbing Scarm to wall up or Cir to continue looping without using more resources.

If you control a monster that is not a "Burning Abyss" monster, destroy this card. You can only use 1 of the following effects of "Scarm, Malebranche of the Burning Abyss" per turn, and only once that turn. ● If you control no Spell/Trap Cards: You can Special Summon this card from your hand. ● During the End Phase, if this card was sent to the Graveyard this turn: You can add 1 Level 3 DARK Fiend-Type monster from your Deck to your hand, except "Scarm, Malebranche of the Burning Abyss".

Scarm is heavily reminiscent of XX-Saber Darksoul, except that its searching effect works even when it’s detached as an XYZ material. Tour Guide into Scarm into Dante basically means that you’ve made Dante at the cost of your normal summon, since you can just search another Tour Guide during your End Phase after detaching Scarm. Scarm is also fairly beefy with 2000 defense, so you can camp on him if you need to draw into more cards to get your engine going.

It’s important to note that Burning Abyss monsters cannot miss timing, due to PSCT. If they are sent to the graveyard as Chain Link 2 or higher, their effects will start a new chain after the current one resolves. 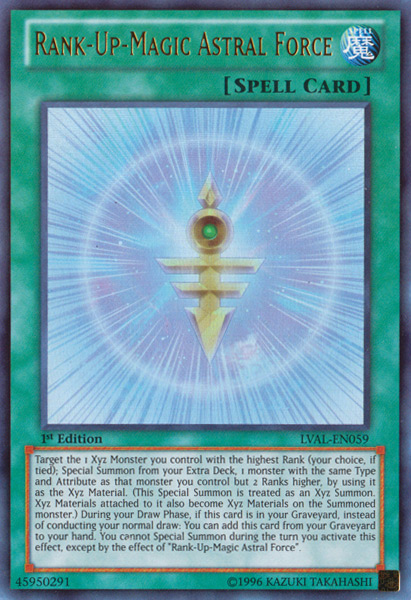 This is effectively your boss monster; let's familiarize ourselves with it. Target the 1 Xyz Monster you control with the highest Rank (your choice, if tied); Special Summon from your Extra Deck, 1 monster with the same Type and Attribute as that monster you control but 2 Ranks higher, by using it as the Xyz Material. (This Special Summon is treated as an Xyz Summon. Xyz Materials attached to it also become Xyz Materials on the Summoned monster.) During your Draw Phase, if this card is in your Graveyard, instead of conducting your normal draw: You can add this card from your Graveyard to your hand. You cannot Special Summon during the turn you activate this effect, except by the effect of "Rank-Up-Magic Astral Force". The standard play with Tour Guide + RUM (or any two Burning Abyss monsters + RUM) is to go into Dante, detach Scarm, mill 1 (you don’t actually want to mill your Burning Abyss monsters since Graff pulls them from the deck, and hitting Cir is useless since whatever your revive will nuke itself after you Rank Up. You should mill 3 if you made Dante without Scarm, however, because milling it will allow you to search Tour Guide during your End Phase), and use RUM to go into Pleiades. Now you have effectively made Pleiades with a 1-card investment, since Tour Guide will replace itself at the end of the turn. As an added bonus, detaching Dante for Pleiades’ effect will also trigger its effect to add a Burning Abyss monster to your hand from your graveyard.

Here are some other options to special summon with Rank-Up-Magic Astral Force:

There's no doubt that Shaddolls will be very highly represented at the next ARGCS so what players should be asking themselves is "If I decide not to use Shaddolls what deck should I use instead?" Look no further! I think that Burning Abyss have a great matchup against Shaddolls. This deck can easily support a full three copies of one of the most powerful trap cards in the game, Phoenix Wing Wind Blast. Burning Abyss monsters’ second effects are triggered whenever they hit the graveyard, so PWWB turns into a +0 that can set your opponent back a turn and put important combo pieces onto your field or into your hand at the same time. PWWB is also a perfect out to El Shaddoll Winda because it will not trigger the secondary effect to add a Shaddoll spell/trap from the graveyard to the hand. However, Shaddolls’ weakness to the many trap cards this deck can run in multiples (not just PWWB, but also Karma Cut and Vanity’s Emptiness) isn’t the fundamental reason why I believe the matchup favors Burning Abyss. Both decks at their core are fundamentally grind decks, and Burning Abyss plays this role far better than Shaddolls do. Burning Abyss runs better trap cards, its monsters maintain and generate advantage with far faster and with fewer restrictions than Shaddolls, and it has better and more numerous 1-card plays. The only unconditional 1-card play Shaddolls have is to summon Armageddon Knight and dump a Shadoll to draw, search, or pop a spell or trap card, which is not very aggressive. Burning Abyss can do the same thing with Mathematician dumping Scarm to search Tour Guide. Meanwhile, Burning Abyss’ power play of Tour Guide into Dante is far easier to pull off than Shaddoll Fusion, which requires major setup if the opponent doesn’t have an Extra Deck monster on the field. Pleiades can single-handedly defeat Shaddolls, as none of their monsters barring Dragon can clear it from the field, but a set Dragon is very easily read. Shaddolls’ best interruption card, Super Polymerization, might temporarily clear your field, but it almost certainly will cost them more in card advantage than you, since it will invariably be sending Burning Abyss monsters to the graveyard to trigger their effects. If you manage to set up a Dante + Cir loop, you can even add back RUM to your hand from your grave, skipping your Draw Phase, in order to bring out another Pleiades!

This deck generates a huge amount of advantage and will overwhelm your opponent very fast. I wanna thank Robert M. for bringing this deck to my attention and helping me construct it. That's it for this week's article! The circuit series stops by Atlantic City next on August 23-24!