As many Cardfight players already know, the release of Booster Set 5: Awakening ot Twin Blades was last weekend. The set introduces the game to crossrides and boosts the already dominant Royal Paladin and Kagero, along with other decks such as Shadow Paladin, Dimensional Police, and Oracle Think Tank. The set also marks the debut of Neo Nectar and Murakumo. Most people familiar with the game already witnessed the release of this set in Japan and noticed how the metagame shifted due to the introduction of "crossrides" and Majesty Lord Blaster. But how exactly did the metagame shift? We can find the answer by looking into the properly hyped boss units of the set. 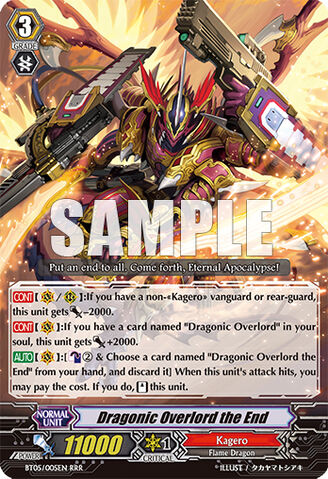 You might ask, how is this slight boost in power important? Well, to put it briefly, it changes the way you set up your columns. Looking back to before BT05, most people made sure they had consistent 16,000 power columns, because the strongest common vanguards boasted 11,000 power (Shamsiel/Calamity Flame/Silvest/Agravain are the exceptions!), and a 16,000+ attack would demand 10,000 shield, usually from a trigger of some sort. Now that the ceiling of power has risen to 13,000, people need to start rethinking their decks to make consistent 18,000 power columns, at least if they want to do well against this deck and Shadow Paladins, but we'll get to that later.

The End also sports an extremely dangerous skill. If it's your vanguard and its attack hits anything, you can counterblast two and discard another copy of itself, which is also known as a persona blast, to stand it. It doesn't lose twin drive, power, or anything of the sort, it just stands and it's ready to attack again. Looking at this from a card advantage perspective, you're trading one grade three unit for an extra twin drive, which is already a +1, but what if you got a critical trigger? If it was against a vanguard they'd take two damage and you'd get to attack for 16,000-18,000 power with another twin drive to gain an additional two cards. There's also the additional shield they play to block the attack as well. This skill makes The End a very viable unit to focus around, considering your opponent will tend to throw a lot at it to prevent it from hitting due to the insane pressure that it applies.

Another reason that Dragonic Overlord the End is guarunteed to be successful upon release is the other Kagero support that revolves around it. Your starting vanguard, Lizard Soldier Conroe, is one of the most versatile starting vanguards in the game. Being able to get any grade 1 unit to your hand turns your grade 1 lineup into a toolbox. Also, Demonic Dragon Mage Kimnara, Berserk Dragon, and Heatnail Salamander all have abilities that can retire boosting units. Being able to retire boosters is very important, as it is really difficult to even land a hit on The End without boosting. This promotes a very defensive style of playing, while still boasting the offensive threat that The End comes with. 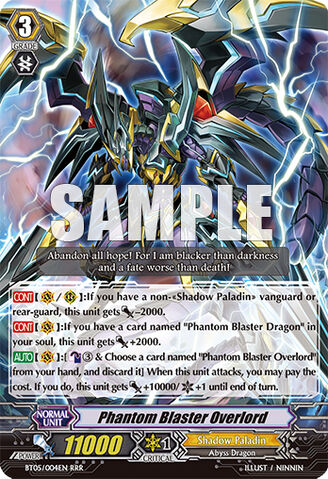 The problem with Overlord is its second skill, or its persona blast. When Overlord attacks, you can discard another copy of itself and counter blast three to give it 10,000 power and an extra critical. At first this will seem very threatening, but after you think about it, it's easily negligible. First off, the skill costs a whopping three counterblast to use, which leaves you with only two damage at the most (not counting heal triggers and unflipping damage) to use for your other units. Second, the skill is easily shut down by sentinels, which every deck should be using in the first place. You don't even get your resources back if the attack doesn't hit, meaning it's all just a big waste, as compared to Dragonic Overlord The End, who doesn't need to invest resources unless your hit is confirmed.

Even if Overlord's extra critical isn't that useful, a lot of the other Shadow Paladins have advantageous skills. Darkness Maiden, Macha and Skull Witch, Nemain, are strictly better uses for your counterblasts and generate quality card advantage. Even if they both have very low power to be useful offensively, they're easy 5,000 intercept units that are easy to spend when you have a 13,000 power vanguard. Not to mention Macha has the ability to pull your 8,000 vanila units from the deck to give you better boosters to counter crossrides. Even if the Blaster Dark ride chain's skills aren't very useful outside of Javelin, being able to build around a tank is still valuable 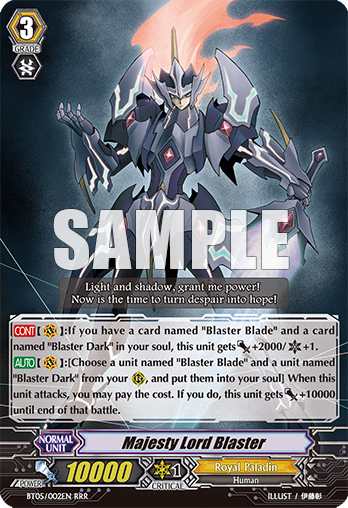 Now for the last main boss monster of the set, but this time it isn't a crossride. Majesty Lord Blaster is a 10,000 power grade 3 Royal Paladin unit. Instead of being a crossride, it's a very unique unit that has the ability of gaining defensive power through a different method. If you have Blaster Blade and Blaster Dark in your soul, then Majesty Lord gains +2,000 and an extra critical during either player's turn continuously. At this point you may be curious of how to get them both in the soul outside of using mediocre cards such as Dream Painter and Nightmare Painter, but when Majesty Lord attacks, it can move Blaster Blade and Blaster Dark from your rear guard into your soul to give it +10,000 power for the turn. This means that you can potentially attack with both Blasters, then put them both in the soul to make Majesty Lord attack for 22,000 power unboosted with a critical, no counterblast needed.

Now Majesty Lord might be 1,000 power off from being as tanky as Dragonic Overlord The End or Phantom Blaster Overlord, but another thing to take note is that it's part of Royal Paladin, which has some of the best support in the game. Sporting powerful grade 3 units such as King of Knights, Alfred, Knight of Explosive Flames, Palamedes, and Soul Saver Dragon gives you a lot of room for versatility, and Blaster Blade itself can be useful in the card advantage it brings. Since Majesty Lord doesn't burn up counterblast like the other two bosses, you are able to invest your damage into cards such as Alfred, Blaster Blade, and Starcall Trumpeteer to gain easy advantage. There's also the fact that Wingal Brave heavily supports Majesty Lord, since it can search either of the grade 2 Blasters or Majesty Lord, as well as more targets if you choose to play them. Overall, this deck has the potential to tank but has a myriad of other strategies to use as well. 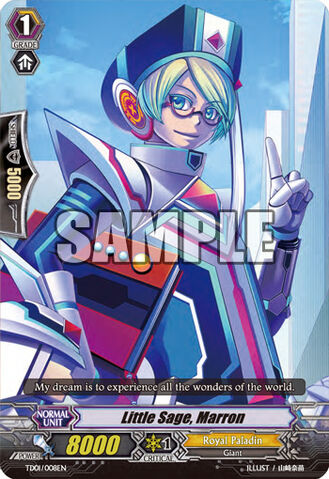 The first and probably the most obvious is 10,000 + 8,000. We get 10,000 power from vanilla grade 2 units that each clan has (bar Nubatama), the new 7,000 grade 1 units that gain +3,000 when they attack (Knight of Friendship, Key and more in the future), 10,000 power grade 3 bosses, and a few other exceptions. The 8,000 booster comes from the vanilla grade 1 units that every clan has (once again, bar Nubatama) or the 7,000 grade 1 units that can increase their power by 1,000 at the cost of a counterblast. What this means is that players should heavily reconsider including their vanilla units if they weren't before. People tend to forego the vanilla units in some decks because they don't make anything more than 16,000 columns, but now there's something new to be concerned about.

The second combination is perhaps one of the most rare, which is 9,000 + 9,000. The precondition for this kind of column is that your clan needs to have a 9,000 booster. Examples of this are Turquoise Beast Tamer, Sleygal Dagger, Poet of Aspiration, Amon, Toypugal, etc. This is probably the best column to pursue in your deckbuilding because it allows you to safely fit in more 9,000 grade 2 units, which unlike the vanilla 10,000 units, come with advantageous skills that can do more than just beat down your opponent.

Thirdly, we have 11,000 + 7,000. This is perhaps the second easiest 18,000 column to make, since most decks already come with 11,000 attackers, whether they're their 11,000 grade 3 bosses or their grade 2 attackers that can go up to 11,000 power (Examples include Crimson Beast Tamer, Sleygal Sword, Demon of Aspiration, Amon, Ruin Shade, etc). A lot of the grade two units were underated because they didn't make that many important columns without a 9,000 booster. However playing these now can make easy 18,000 columns with your grade 1 7,000 units. This is important, because ride chains similar to Vortimer's are essentially forced to run four of their grade 1, which have 7,000 power. Being able to take that unit and make it useful against crossrides can prove to be beneficial. 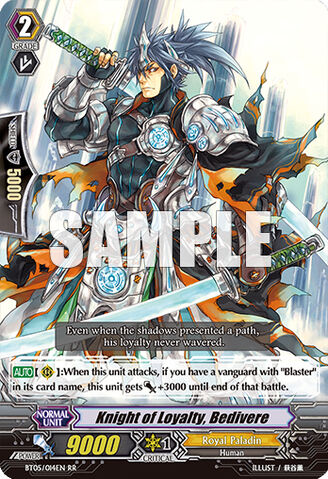 Lastly, there's 12,000 + 6,000. The prerequisite for this column is having a 12,000 attacker. This is pretty tricky, since there are generally only two forms of 12,000 attackers in this game. The first are the grade 3's that gain 2,000 power when they either attack a vanguard or are boosted. Notable examples include Master Swordsman, Nightstorm and Gigantech Destroyer. The second type are the grade 2 units that can attack for 12,000. Both crossrides and Majesty Lord gained one of these in BT05, along with Oracle Think Tank. Burning Horn Dragon, Knight of Nullity, Masquerade, and Knight of Loyalty Bedivere all are 9,000 grade two units that gain 3,000 power when they attack and you have their respective boss monster as your vanguard. This makes them free 12,000 attackers, which is extremely good in the new metagame.

While I might be overemphasizing 13,000 and 18,000 and trying to promote more and more strong columns, it's still not wrong to include some weaker units. While they won't be able to match up with crossride power, they still come with powerful skills and there are still other decks in Vanguard that don't boast a strong defensive vanguard. Weaker grade 2's with on hit abilities are still definitely worth playing because of the rewards that they grant. Overall, you just need to find the ideal balance of pressure and power.

With all that being said, these aren't the only crossrides we'll be seeing in Vanguard's lifespan. BT08 and B T09 feature even more crossrides to look out for and only make the 18,000 column more relevant. It has become clear at this point that the environment we play in is very prone to change and we need to start adapting. At this point deck building has only begun to grow in complexity. How complex will our choices become? Only time will tell.

If you have any questions concerning the article, leave them down in the comments section below and I will try to get to them in my own time. If you're a veteran who has already had experience with crossrides or a newbie who hardly knew what one was, I hope this article brought some kind of new information to you. Either way, thanks for reading!

Kaijudo Article Contest: How to Gauge and Engage
Breaking skills down to the basic level
Our Contributors