Greetings cardfighters! This week I'm talking about G Clan Booster: Commander of the Incessant Waves' impact on the metagame. For a large chunk of the latter half of 2015, we've seen a format where Shadow Paladin has reigned pretty dominant. Other decks have definitely topped and we are far from having a one deck format, but we have consistently seen Shadow Paladin top in large numbers ever since the Legend Deck was released. In Bushiroad continentals just a couple weeks ago, Shadow Paladin took 3 slots in the top 4, with Angel Feathers taking a surprise victory in the event! With all this said, how has Bushiroad decided to out power creep the well oiled machine that is the Revenger deck, which arguably has no fatal flaws or weak points?

The answer is to pay close attention as to what traits define the format. I've discussed this in a previous article if you want to check it out HERE, but the meta has been defined by decks that are capable of having a strong early, mid, and late game with few to no weaknesses. A deck cannot be top tier material in this format by having even one state in the game where their plays are lackluster, because more often than not you would lose tempo to a deck that does. If you look at the decks that have consistently been topping (Revengers, Sanctuary Guard-Jewel Knights, Machinings [as of recently with G-BT04 support], etc.) you would find this sort of trend is present throughout. With this current logic though, it would be impossible to out power creep the Revenger deck as it is because the deck's flexibility and speed set the highest bar on what a card can do for its cost, which is at the highest it has ever been. So what Bushiroad did was create a deck that defies this sort of common trend that we see here.

To elaborate, the most important state of the game is the early game, because those cards usually can transition their value well enough into the mid and late game stages as well. This has been the trend, until now that is. So what Bushiroad did was create a deck that has such a monstrously powerful early game, so much so it puts itself in a different league from everything else. Due to the exploitable nature of Generation Breaks and Legions, the deck can intentionally gradelock itself and win simply off the Grade 2 game. I'm referring to the infamous Ripple Rush deck that everyone has been talking about. To showcase my point, I will post the culprit unit that makes everything possible: Flashing Ripple, Odysseus. 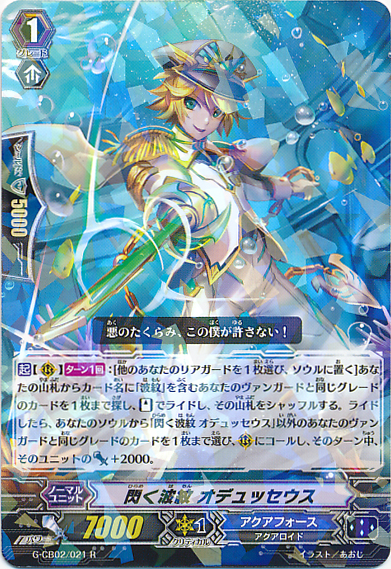 [ACT](RC)[1/Turn]:[Choose one of your other rear-guards, and put it into your soul] Search your deck for up to one card with "Ripple" in its card name with the same grade as your vanguard, ride it as [Stand], and shuffle your deck. If you rode, choose up to one card not named "Flashing Ripple, Odysseus" from your soul with the same grade as your vanguard, call it to (RC), and that unit gets [Power]+2000 until end of turn.

Aqua Force has always had a strong reputation of having a powerful early game with Tidal Assault. Odysseus however takes that to a new level. This unit is absolutely insane for what it can do. It combos disgustingly with Tidal Rescue Sea Turtle Soldier (a Devil Summoner clone) to instantly fill up the board and assures a Rising Ripple, Pavroth on the Vanguard circle for on-hit restanding pressure with a 10k base, that is difficult to make efficient columns against in the early game. Even without Sea Turtle Soldier, Odysseus makes riding Tidal Assault not even bad, because you can recall it out from the soul and make it an 11k swinger on turn 2. It's also once per turn and not just an on-call skill, meaning you can repeat this skill with Sea Turtle Soldier or Tidal Assault every single turn. This is especially significant to thin the deck of non-triggers, which is important since the deck relies on single drive checks. What makes this deck very strong is how it can exploit current Vanguard decks that rely on Generation Break or Legion to do things and create a monstrously powerful early game that in turn cannot be efficiently disrupted. Without access to said Generation Break/Legion skills and only a limited ability to perform early game actions in comparison to Ripple Rush, most conventional decks would crumble apart in this match-up. There are also more conventional builds that utilize Grade 3s to play a more "normal game of vanguard" and they certainly still work well, but I believe the rush variant is the superior choice to guarantee a more powerful early game and lock the opponent out from using their units' skills. 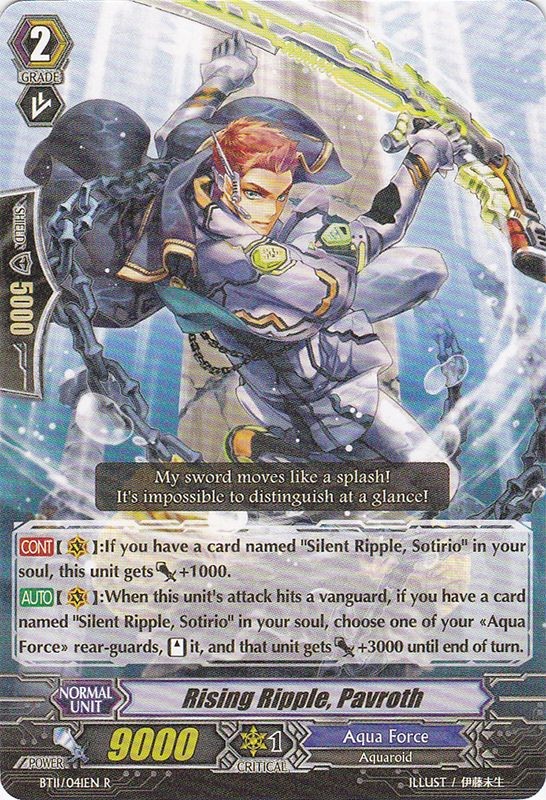 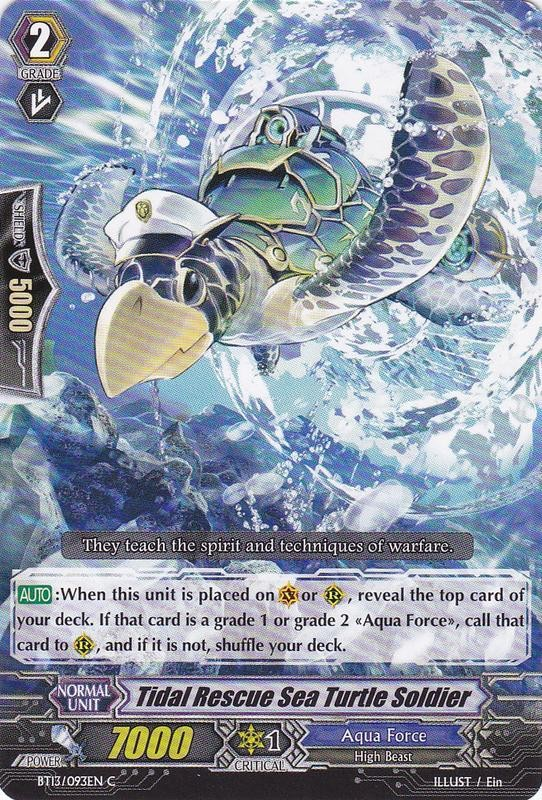 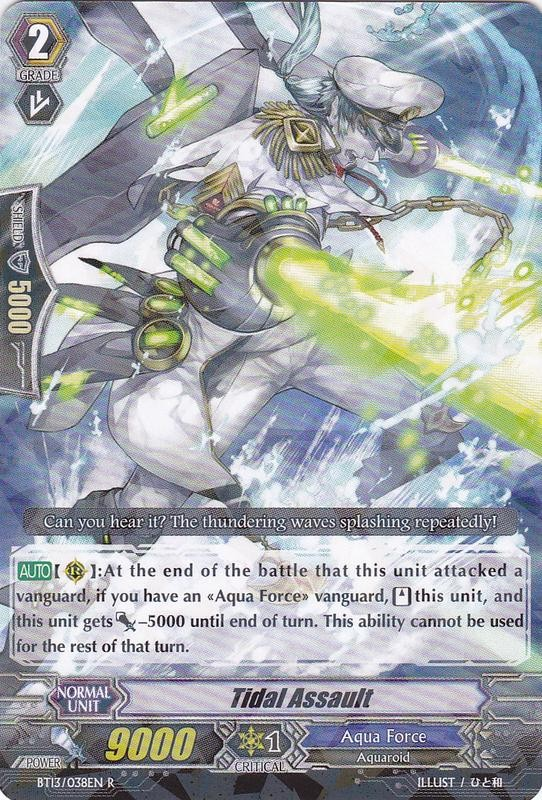 So what decks are there that can counter Ripples? Excluding the Star-Vader support coming out next in G-BT05 there is not a lot, because there is not much else out right now that can put up a comparable early game with them. Even as far as hard counters are concerned, most retire based decks people play either retire the front row or rely on legion/stride to answer units on the board (Brawlers and The "X"). I would argue that to fight against this deck, one would need a deck that can retire backrow and retire it very early. Perditions sound like a good niche choice, as they have two Grade 2s that can retire Odysseus for a low cost: Perdition Dragon, Menace Laser Dragon and Perdition Dragon, Dragonic Neoflame. Revengers could still perhaps put up a fight but you'd have to draw into one of your four copies of Blaster Dark Revenger "Abyss" to answer the Odysseus. Your Phantom Blaster Abyss and your stride skills would probably be turned off unless the opponent was playing the Grade 3 build, but you could hit with Judgebau Revenger, call two Black-Winged Swordbreakers and build up a hand that can guard. Sure the match-up is probably uphilly for this deck, but the deck has definitely been proven to have great match-ups against other decks one may come across. Omega Glendios builds could be effective, but the issue is the deck cannot start locking until reaching Grade 3, which is problematic when going second. Brawlers could still be effective with Skyhowl Dragon being able to eliminate Grade 2s from the field, but the deck cannot touch Odysseus so it would not be the most consistent answer if your opponent can call replacements. 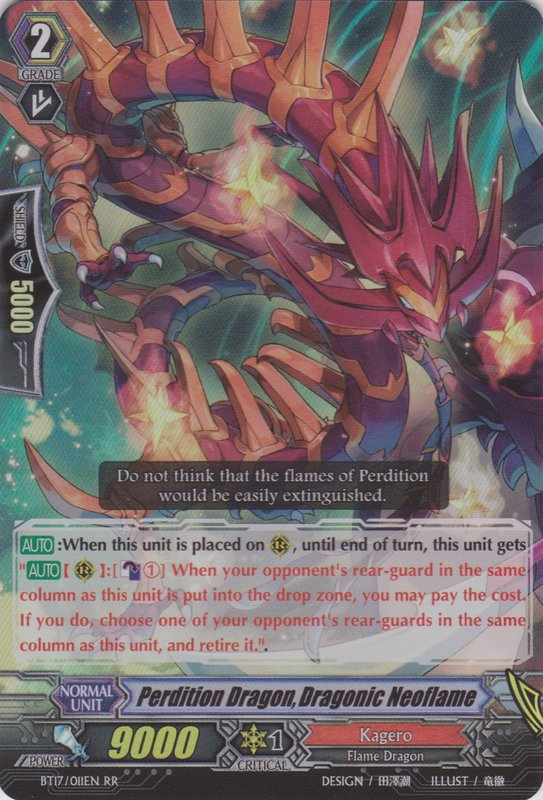 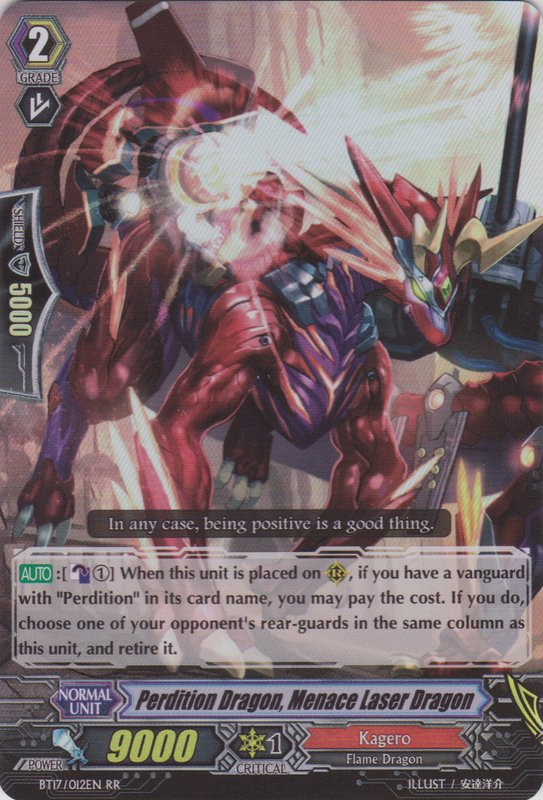 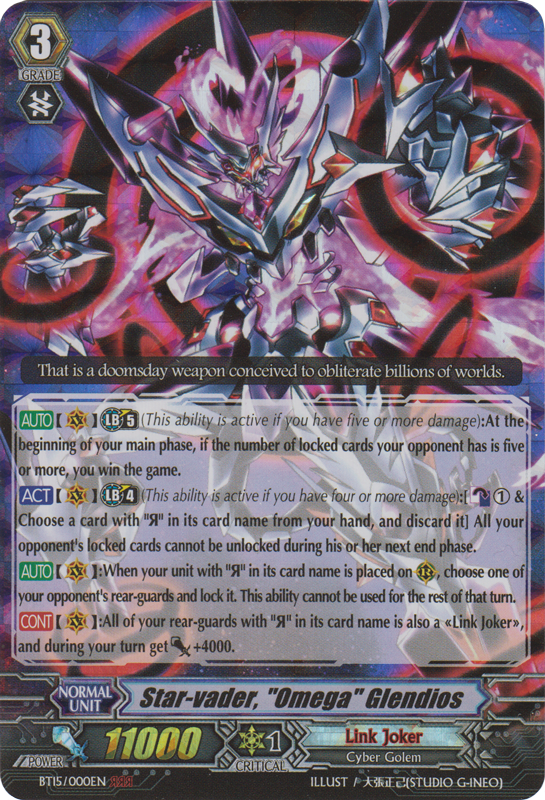 I'm interested to hear from you guys what you think would be good to fight against Ripples. Do leave said suggestions in the comments! Until next time, Play Hard or Go Home!