Greetings cardfighters! This week I wanted to touch on Transcension of Blade and Blossom and the impact the Blaster Blade support will have on Royal Paladins. Out of all the clans it seems that Royals are the one that constantly evolves the most, with new boss units or engines changing the deck every few months or so. The clan certainly has the most diversity of viable builds in comparison to many other clans with Sanctuary Guard, Jewel Knights, Thing Saver-MLB, Altmile, Alfred, and others all ranging from viable to top tier. So what new changes come with G-BT06? A return of the most iconic card in the game. 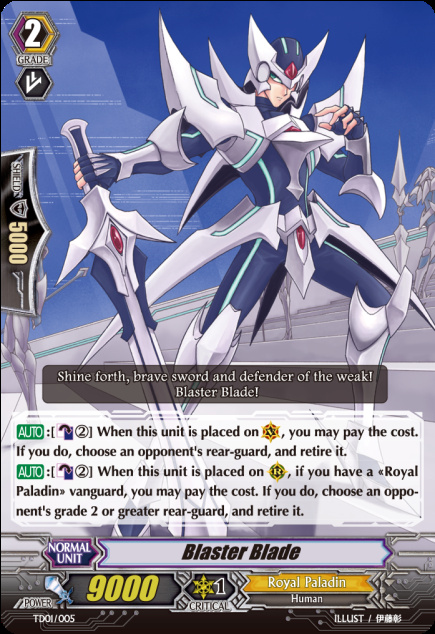 Blaster Blade is the Dark Magician of Cardfight!! Vanguard, being the original protagonist's main card throughout the series and it had its time in competitive play. It was an obvious necessity in Majesty Lord Blaster decks back in the day, and it saw usage in Seeker decks during the short legion era, being one of Alfred Exiv's legion mates. As a card however in today's game it is nothing to write home about. Counterblast 2 to retire a front row unit is vastly overcosted by today's standards in a deck which does not specialize in retire. The on-ride skill to retire any unit is certainly better, but it still takes up too many resources in a deck largely known for being counterblast reliant. It was so overcosted that Bushiroad had to print its Seeker counterpart to be one counterblast cheaper for essentially the same ability.  So how does Bushiroad take one of the first cards in the game and re-vamp it to today's standards? The answer is they created support that has synergy with current builds for the clan and also changes the card to have a variety of new functions. 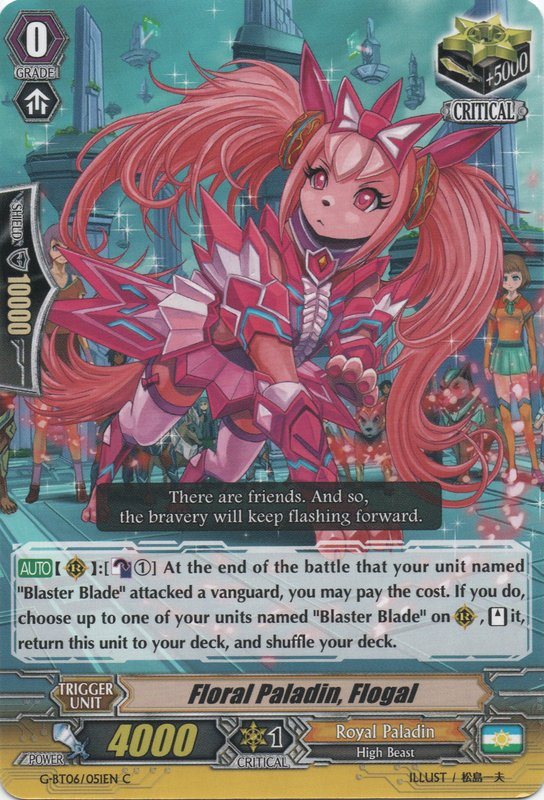 Floral Paladin, Flogal in my view is the strongest of the new cards that transforms Blaster Blade into a very different unit while being easily splashable. The other two cards, Llew and Barcgal require more deck commitment (which I'll touch on later) but Flogal is such a powerful unit because it requires little to no space to integrate it. It is a critical trigger, so it is very easy to replace one set of triggers for another one that has the same function and then some. Not only can it return itself into the deck, it allows Blaster Blade to attack multiple times. One of the decks people have been talking about is Sanctuary Guard, where Blaster Blade will already have a large power boost thanks to Regalie's skill. Blaster Blade is easily searchable off Knight of Twin Sword, so it is a simple matter of accumulating into multiple Flogals, or even using Sanctuary Guard Dragon's on-ride skill to tutor one out of the deck. Factor in triple drive and stacking critical triggers on Blaster Blade, and you have a powered up rear-guard unit swinging repeatedly with extra criticals. Adding in a secondary win condition by only swapping out a couple Grade 2 units and changing one stack of triggers into another sounds like a very worthwhile investment if you ask me.  This same logic can easily be applied to Altmile based decks, as you can get similar results combining Blaster Blade with Blue Sky Knight Almile and his various stride forms to gain large amounts of power. 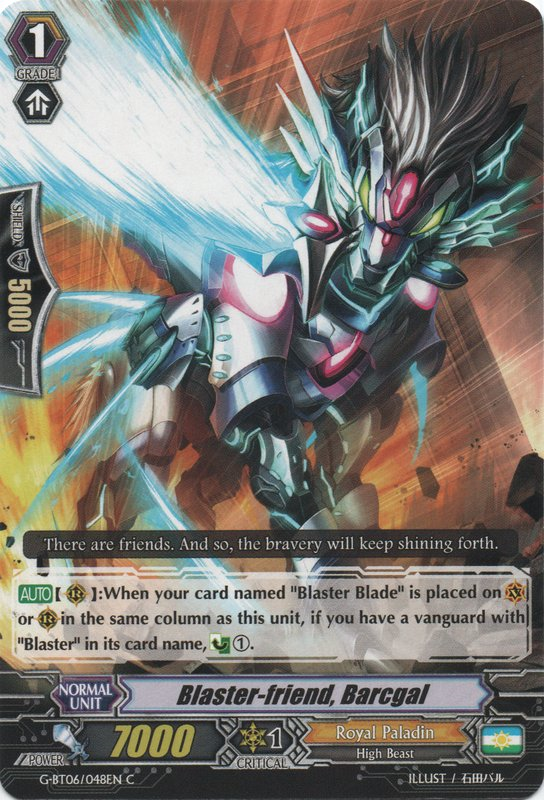 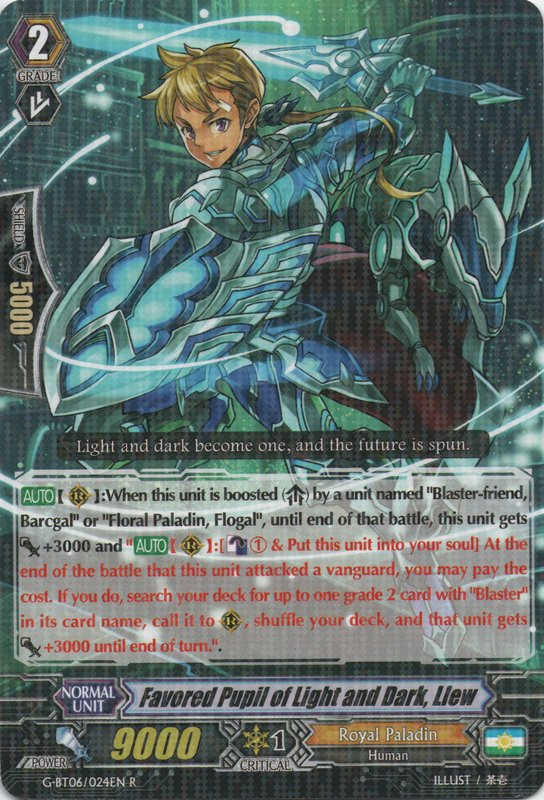 Blaster Friend, Barcgal and Favored Pupil of Light and Dark, Llew takes this engine one step further. Barcgal provides a source of unflipping counterblasts provided you have a Blaster vanguard and also is one of the two units required by Llew to use his own skill. Llew serves as essentially a stronger but slightly more conditional Tidal Assault that also nets you a soulcharge, as long as it was boosted by a Barcgal or a Flogal. Thanks to the +3k in power, it hits the 16k number if boosted by Flogal, however its counterblast 1 cost is required since you would not gain the unflip by using Barcgal instead. I've seen some argue that you can utilize this full suite in Sanctuary Guard decks forgoing Barcgal's requirement of a Blaster vanguard because Llew is that powerful. One can go that route if he or she wishes but these cards were really designed to give Majesty Lord-Thing Saver decks new life. 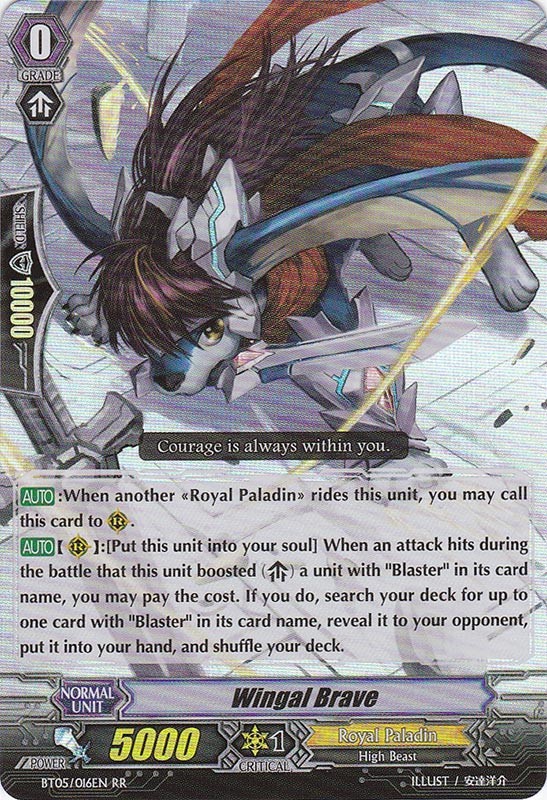 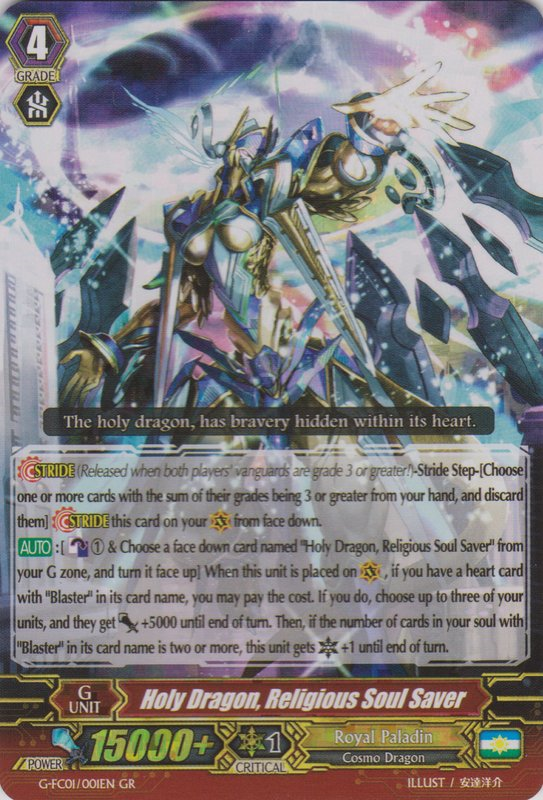 Wingal Brave has excellent synergy with Barcgal! Combined with Swordsman of Light, Blaster Rapier Laura the deck now has two Grade 1s with Blaster in its name, enabling a Turn 1 search with Wingal Brave if going first. This also allows Holy Dragon, Religious Soul Saver to be more consistent, which has potential to be a very strong, critical gaining 1st stride. Barcgal is also searchable off Wingal Brave itself making the Llew combo more consistent for an aggressive early game. Barcgal also gives a much needed unflip engine for the deck, allowing Blaster Blade's CB to be more usable in addition to setting up a late game Thing Saver Dragon finish. Besides giving the deck a stronger Tidal Assault, Llew is excellent for dual serving as an additional soulcharging engine. This goes without saying that it is a huge boon to Thing Saver Dragon, which can easily end games if the double restand is able to be set up. Combining this engine with the Barcgal unflip engine, triple attacking Thing Savers becomes much more consistent, smooth, and achievable than it used to be. 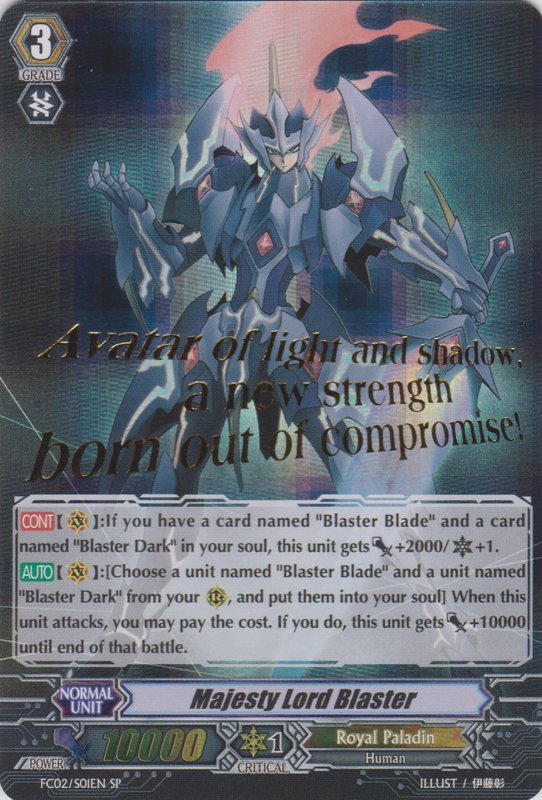 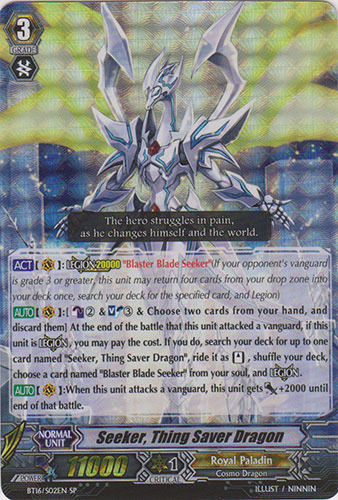 There's a strong case to make for the Majesty Lord-Thing Saver deck in the current metagame too. The deck has a powerful early game with Llew, as well as having the various Blaster incarnations for field control. Thanks to Wingal Brave, the deck can run a minimum amount of Grade 3s, so the deck can afford to be more aggressive in the early game. Unlike other builds for Royal Paladin, this build isn't entirely rear-guard dependent and can far more easily take on Chaos Breaker than Sanctuary Guard can. With Kagero gaining new Legend deck support, many fans will flock to that deck and Thing Saver has a more reliable match-up in comparison to other Royal Paladin builds that need to maintain a full board to be optimal. Regarding the stride game the deck is no slouch, Religious Soul Saver is a powerful card if it can be set up and the deck can easily fall back on Rain Element, Madew. The Aerial Divine Knight Altmile-Blaster Blade-Flogal play is still an option if need be, so the deck has many different outlets to execute powerful plays each turn. Lastly regarding Flogal and with 5 open counterblast, the deck can triple attack with Thing Saver, stack up to 6 triggers on a Blaster Blade, and restand it with Flogal!

Let me know what you all think about the new Blaster support in the comments. Is anyone ready to stand up some avatars? Are there any combos or other aspects I missed out on touching upon? Any successful builds playtested? Until next time, Play Hard or Go Home!