Greetings cardfighters! This week I'm going to cover my thoughts on the cards coming out in the next booster pack and their impact on the metagame. G-BT03 Sovereign Star Dragon is the final release of new cards before the Bushiroad Spring Fest Continental Championship as well as the ARG National Tournament in mid-August! The existing metagame in addition to these cards will be what you need to expect if you plan on participating in either of these.

For those who would prefer the metagame to stay as it is, you're in luck. Sovereign Star Dragon unfortunately does not appear to be a metagame shattering set. There are only a few cards that are expected to see competitive play from this set, and the top tiers should stay as they are (Shadow Paladin and Royal Paladin being the top two, followed by the other popular clans like Kagero, Dimension Police [Metalborgs], Narukami, and others). That said, G-BT03 brings in a twist with solid anti-metagame cards being thrown into the loop as well as an additional stride for the Shadow Paladin deck.

*Disclaimer* I have to add captions for the following cards' abilities since English images were not uploaded during the time this article was written. My apologies if it looks rather clunky 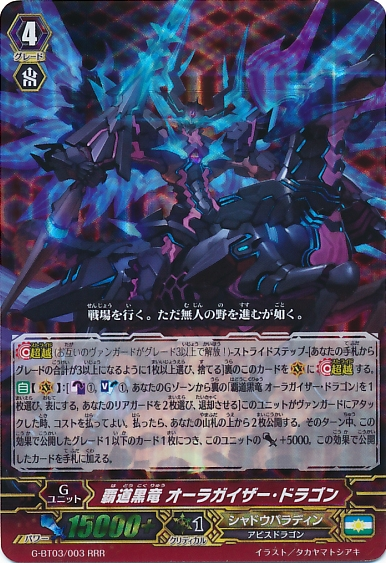 [AUTO](VC):[Counter Blast (1) & Soul Blast (1) & Choose a card named "Supremacy Black Dragon, Aurageyser Dragon" from your G zone, and turn it face up & Choose two of your rear-guards, and retire them] When this unit attacks a vanguard, you may pay the cost. If you do, reveal two cards from the top of your deck. This unit gets [Power]+5000 for each grade 1 or less card revealed with this effect until end of turn. Put the cards revealed with this effect into your hand.

The Revenger deck really did not need more support. Thankfully, most of the new generic Shadow Paladin cards printed are quite mediocre (in comparison to Revengers at least) so the main deck builds for Revengers did not become even stronger. However, they did get a new stride to play with. Aurageyser Dragon is probably the biggest addition Sovereign Star Dragon has to offer to the metagame as it gives the current best deck another powerful stride to use before being able to use Phantom Blaster "Diablo". Prior to Aurageyser, they had to rely on Dragruler Revenant, Grim Recruiter, or in some cases Rain Element, Madew.

Aurageyser is a really solid card because it's been proven that trading field advantage for hand advantage is a benefit, especially after you've already boosted/attacked with those rears. It's even better considering that Revengers gain a lot of card advantage by using Judgebau Revenger to superior call into Black-winged Swordbreaker, a prime target for Aurageyser since it is not a Revenger unit. You not only make room for superior calling next turn, you also gain additional cards in your hand to guard your opponent. Aurageyser accomplishes this for a small cost of Counterblast 1 and Soulblast 1. For builds that are using Blaster Dark "Diablo" as an alternate vanguard, Aurageyser also fixes the Generation Break 2 problem, due to being a persona stride. 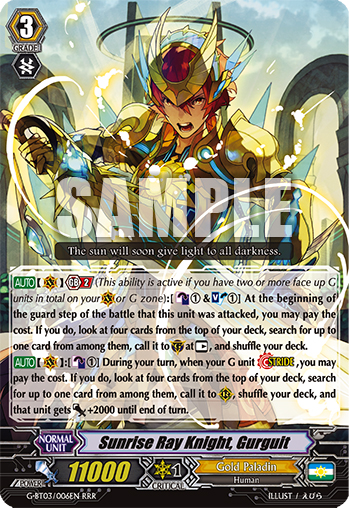 I really do love Gold Paladins, but I have to say that I do not see the deck becoming top tier with G-BT03. They simply do not have the same level of consistency and as strong of an early game as their Royal and Shadow counterparts do. The G version of the deck wants to capitalize on using slower Generation Break cards such as Farmgal to maximize the deck's mechanic: gaining raw card advantage off free superior calls and powering up with Golden Dragon, Scourge Point Dragon.  That said, I believe Gurguit here can be a strong anti-meta pick if the playing field appears to heavily consist of Shadow Paladins. Gurguit takes an interesting spin to Generation Break 2 Vanguards by having a skill that applies on the opponent's turn, and he has quite the powerful one. Being able to superior guard from the deck for a low cost against the Revenger match-up is very powerful and it counters them significantly. Gold Paladins also have an edge on countering Phantom Blaster "Diablo" since they should always be able to easily retire two rear-guards and can therefore play a defensive, reactionary role. Or if you're feeling sacky, you can superior guard a Perfect Guard off Gurguit's skill and cackle as the Revenger player retired three cards for no reason. Of course, the deck also plays well against retire heavy decks like Kagero and Narukami. It's weakness is mainly being unable to deal with combo heavy decks such as Sanctuary Guard Regalie and Lambros, as they will definitely get out-grinded by high powered multi-attacks. It also loses to other grind decks with a more clear win condition, like Oracle Think Tank. It can either lose miserably to Link Joker or can easily win the match-up if the GP player plays Salvation Lion, Grand Ezel Scissors as an alternate vanguard to gain access to Absolution Lion King, Mithril Ezel.

I know someone is going to comment about Reticent Liberator, Brennius coming out for the Bluish Flame Liberator deck. Brennius is definitely an excellent card for the deck, but one additional support Grade 2 (although a powerful one) isn't going to propel Prominence Glare back to tier 1. Glare's biggest problem is that the card needs to meet multiple different objectives, due to the card not being standalone strong and it requires a combo to work. It also is still a deck that does not play too nicely with striding besides for utilizing Rain Element, Madew, which is a concern in a format so heavily defined by stride. 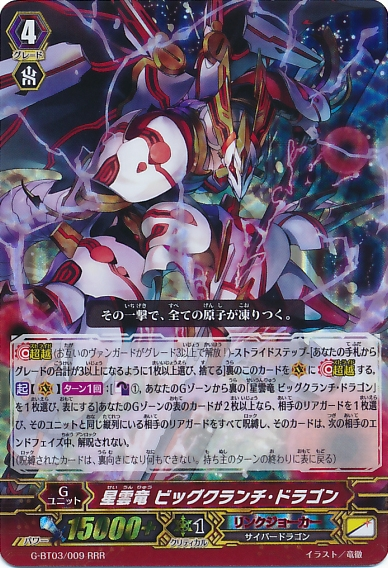 [ACT](VC)[1/Turn]:[Counter Blast (1) & Choose a face down card named "Nebula Dragon, Big Crunch Dragon" from your G zone, and turn it face up] If the number of face up cards in your G zone is two or more, choose one of your opponent's rear-guards, lock all of your opponent's rear-guards in the same column as that unit, and those cards cannot be unlocked during his or her next end phase.
(The locked card is turned face down, and cannot do anything. It turns face up at the end of the owner's turn.)

I was a bit worried about Messiah Link Jokers until Bushiroad leaked this card. Alter Ego Messiah is a pretty good card, but the two Messiah stride units (Judgement and Amnesty) are quite situational. Big Crunch solidifies the strategy and allows Link Joker to do what it does best: play hard control and bring decks down to its level. Granted, Links may have problems against smart Revenger players who know how and when to retire their field before Links are able to start locking, but Big Crunch is an excellent anti-meta choice against Royal Paladin. Sanctuary Guard Regalie builds are gaining a huge swing in popularity among Royal Paladin players and Link Joker shuts that deck down entirely. Having just one column locked by Alter Ego Messiah already shatters the deck's vision of four Stage 3/4 attacks in a turn, and resolving Big Crunch with it essentially ends the game in your favor. The deck of course is also strong against Aqua Force and it does well against Narukami, who aren't able to use Conquest Dragon's power-up abilities to its fullest. Link Joker may be overall too reactionary and slow to join the ranks of the top tiers, but they do have a strong anti-meta niche against the current metagame. Another issue is that Lady Battler of the White Dwarf will not be available until the 2015 World Championship circuit begins in fall, which is an essential card to the Messiah deck. Therefore, it will not be available for the ARG National Tournament or the Bushiroad Spring Fest Continental Championships.

The metagame overall should stay the same with G-BT03 Sovereign Star Dragon. Shadow Paladin (Revenger) builds should continue to reign at top, with Royal Paladin as a strong second. Link Joker and Gold Paladin serve as strong anti-meta additions, and the current tier 1.5 pool of the other popular clans will be present. The metagame looks incredibly diverse as we look into the ARG National Tournament in August. Keeping track of the popularity of clans and percentage usage will probably be a key factor in determining your deck of choice for the tournament, which I'll do my best to cover in future articles! Until next time, Play Hard or Go Home!

Nationals 2015: What Will You Tech Into Your Deck?
The Scoop: Jarel “Pro” Winston
Our Contributors