Greetings cardfighters! As we know, Fighter's Collection 2015 launches this week! In my opinion, this is one of the greatest products to come out in a very long time for the game. The quality of the contents received per booster is superb since the set is filled with nothing but Grade 4 units, with one exception of course. The set also insures that every clan has Grade 4s that they can use and several of them are quite powerful to boot! This was not the case before as several clans were still missing strides and had to rely on Cray Elementals. This article is going to talk about a few of the strides which I think are quite good, but are not receiving as much attention as they deserve. So I'll be avoiding the hyped cards that we all know about, such as Dragonic Overlord the "Ace", Hyper Metalborg, Heavy Duke, and True Brawler, Big Bang Knuckle Turbo. 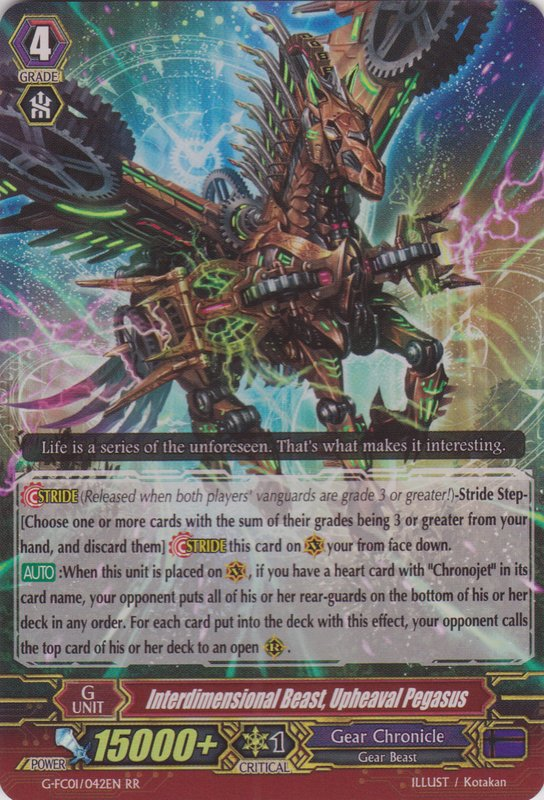 This honestly is the card that Gear Chronicle needed in G-BT01 and I think it is among the clan's best stride units. I'm not sure why Epoch-maker deserved the Generation Rare slot over this. What's excellent about this card is that it is costless and does not rely on hitting for value, unlike many of Gear Chronicle's current stride units. It also consistently pumps up your Summit Crest Gear Wolves to very high hitting numbers, allowing your rear-guard columns to jump up in stages. The best part is that since Vanguard is very flexible in terms of AUTO skills that would activate at the same time, you may choose which abilities to resolve first. In terms of Upheaval Pegasus, you would use its skill to reset your opponent's board and if anything decent is called from it, you would then resolve Chronojet Dragon's stride skill to send it back. It's a card that cripples, filters triggers out of your opponent's deck, synergizes with Gear Wolves, and it allows Chronojet to be more effective. What more can you want?

A word of caution: this card does take some level of skill to use, but it makes playing Gear Chronicle more rewarding. There are certain match-ups where this card is an obvious no-no, such as against Gold Paladins and Maidens which rely on on-call skills for almost all their rear-guards. The most important part is against metagame decks with some on-call skills, and from there you have to be aware of ratios and how many copies are left in their deck of certain cards.  I'll give an example. Say you are playing against Dragonic Overlord the "X". You stride into Upheaval Pegasus and reset their board. However, you did not realize that your opponent had zero copies of Dragonic Burnout in the drop zone and he was lucky enough to call two of them to retire your Gear Wolves you just pumped up. Other examples of commonly played cards to account for are Blaster Dark Revenger "Abyss" and Jewel Knight, Swordmy.  It is important to check what your opponent has gone through and to weigh the probabilities before deciding to use Upheaval Pegasus against those situations. That said, the card adds an additional layer of thought when using Gear Chronicle, and I think that's definitely a good thing. 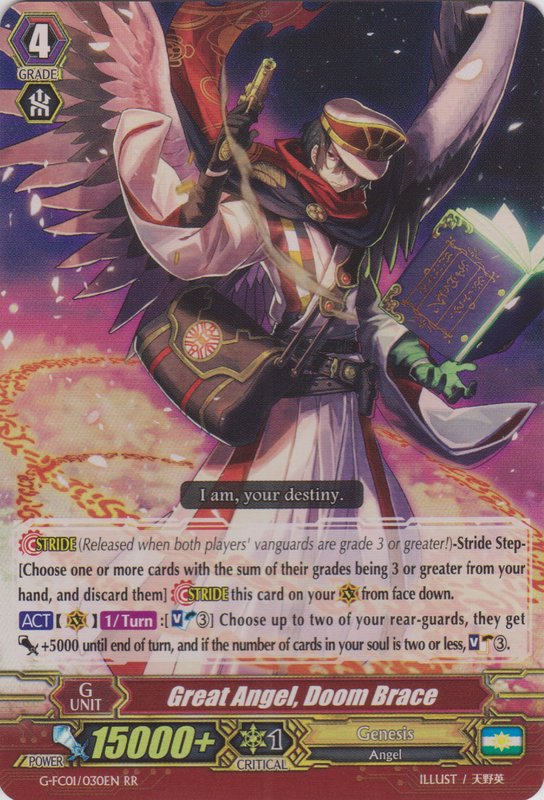 If you couldn't tell by now, I love cards that have free skills, have little to no strings attached, and that advance your game-state quite well. Doom Brace fits that bill since it refunds your cost by soul-charging back the cards you paid, it pumps up two cards to an extra stage, and it sets up your drop zone. Considering this card is meant to be used earlier in the game, you're very likely to have two or less soul after blasting three cards away, while gaining value off the many different Genesis cards that love to be soul-blasted. It is great in Regalias for a pre-legion play, it even does Midday Regalia, Hemera's work for it by setting up the drop zone. This is important to set up Cosmic Regalia, CEO Yggdrassil for the next turn. Regalias prior were known for doing little else until the big Yggdrassil turn, and now they have a very strong option that is Doom Brace! Of course, Genesis are receiving further support in G-BT04 so the sky is the limit in terms of what this card can do in the future. 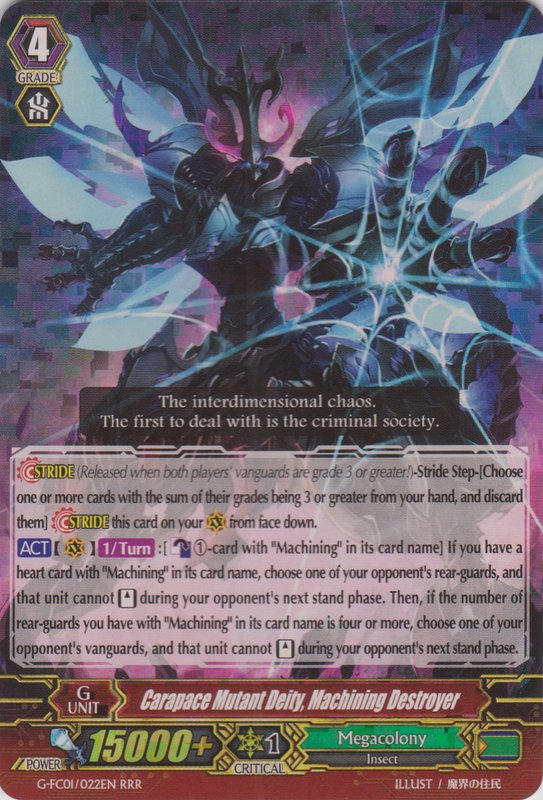 Megacolony has been one of the "joke" clans in Vanguard for a very long time. Except for the dedicated few, not many people played this clan seriously and it has not seen much premier level success, primarily because their control mechanic is far weaker in comparison to retire and lock. This all changes with Machining Destroyer, as the clan has finally gotten a monstrous unit that highly disrupts how decks function today. Stunning a vanguard is no joke, and if it successfully resolves on your opponents turn it might as well be game over. This especially hurts how decks are played today. The reason is that your opponent MUST ride another Grade 3 over their vanguard to essentially do anything on their turn, thereby severely impacting their stride fodder resources. If your opponent re-rides and does not stride, their turn is far weaker than it would have been, which gives you momentum. While legion decks can exploit this by performing legion upon re-riding, it is worth noting that drop zone resources are finite. All the Megacolony player has to do is grind until the opponent reaches that turn when they were unable to re-ride, which will probably give you the game.

One might point out that this card requires a glaring four Machining rear-guards to stun the vanguard. This is addressed with an old Grade 3 unit known as Machining Stag Beetle. On ride, this card ideally +2s for you for no cost, while giving you the board you'd need for Destroyer, which you can immediately stride into if you are going second. The 10000 base is mostly irrelevant in comparison to 11000, as most decks do not form 15000 or 20000 power columns. The 25000 stride unit is not a severe weakness because Stag Beetle calls cards for you. Sure they are still in rest on Turn 3, but your opponent is unlikely to guard your stride on that turn anyway. Expect this deck to be the dark horse of the format and it only potentially gets better with further reinforcements from G-BT04. 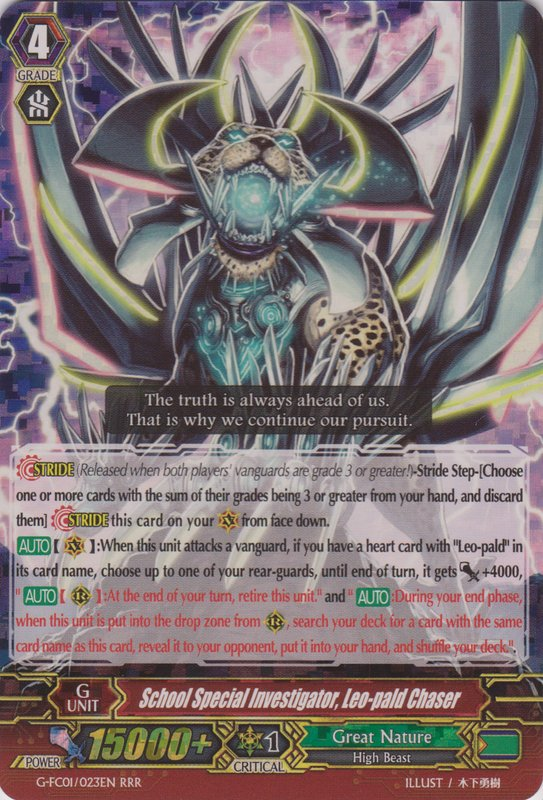 I think Leo-pald will be the optimal build for Great Natures after Fighter's Collection hits. This card is really neat because it not only combos with several cards, it also allows you to grab re-usable copies of resources every turn while not losing anything on your field thanks to the original School Hunter Leo-pald's Limit Break during the end phase. This Limit Break is easier to fulfill since the deck can run Paint Otter. Abusable targets for Leo-pald Chaser include any Grade 3 unit/Diligent Assistant, Minibelly to assure infinite stride fodder or gaining more copies of Coiling Duckbill to plus in the long hall. Of course, searching more copies of Crayon Tiger is always a strong play as well. The card easily synergizes with almost every card in the deck, which is why I think it is definitely a strong pick. The deck is also quite tanky as a result, which allows it to play very well against offensive powerhouses.

Of course, there are plenty of other powerful cards in Fighter's Collection 2015. It can be difficult to remember and keep track of every new card when so many are coming out at once. Hopefully I opened your eyes to some less-known powerhouses from this set and perhaps you'll be that much more prepared at the ARG State Championships this weekend if you run across one of these decks! Next week, I'll delve further into Fighter's Collection 2015 and point out more interesting cards to watch out for or to even play yourself. If there are any specific cards you want me to mention next week, feel free to let me know in the comments and I'll consider it. Until next time, Play Hard or Go Home!

A Clever Mistake
The Scoop: The Casuals’ Conundrum Pt. 2
Our Contributors