Remember Wingal? That old grade 1 from the original trial deck that had no use other than to support Blaster Blade? Well, he's back. Wingal Brave is a new addition to the already established Royal Paladin clan. Introduced in BT05 along with Majesty Lord Blaster, this card helped create one of the most successful decks in the Japanese metagame, as well as one of the first decks to be punctured by the Japanese restriction list. But how exactly did this card become so important? And more importantly, what can other decks do about it? 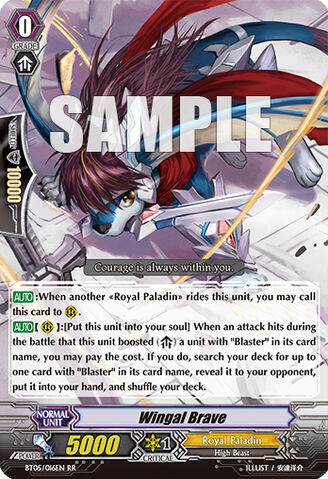 First, let's take a look at the actual card itself. Wingal Brave is a 5,000 power grade 0 with a Pioneer skill, like most starting vanguards. Its unique skill comes to play when it boosts any Blaster unit. If it boosts and hits, you can send itself to the soul and add any Blaster unit from your deck to your hand. Not only does this include everyone's favorite Blaster Blade, cards like Blaster Dark and Majesty Lord Blaster can also be utilized by this card. Since this unit can work with Blaster Blade and can search Majesty Lord Blaster, it can essentially guarantee you your grade 3 ride if it resolves properly.

But let's not stop there. What if you already have your Majesty Lord? What if you need Blaster Blade or Blaster Dark to fulfill its continuous +2,000 power? Wingal Brave once again helps you with this, as he can grab either sword of the twin blade that you need. This is enough to show that Wingal Brave is essentially what ties together the concept of Majesty Lord Blaster. 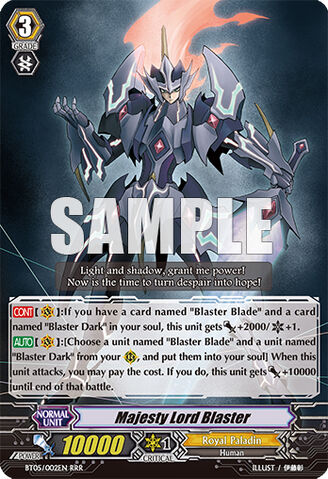 Majesty Lord Blaster is already a strong card to begin with, since it has the potential to become a 12,000 static vanguard with an extra critical (provided you have both Blaster Blade and Blaster Dark in your soul) and also comes with the usual support that Royal Paladin has. Like I said in my BT05 article, it's very easy to build a Majesty Lord deck with several grade 2's and grade 3's that can generate the advantage that you need. Coupled with the actual Blaster engine is just icing on top of the cake. Majesty Lord giving you access to an easy critical (with an additional +10,000 for a turn too!) can be very game ending, and any Royal Paladin player would be more than willing to accept that. Combined with cards like Alfred and Palamedes, this deck is a force to be reckoned with.

Now this may seem very good and all, but what if you're playing against this deck? What can you do to stop their pesky Wingal Brave? The first step is to look into the numbers behind it all. 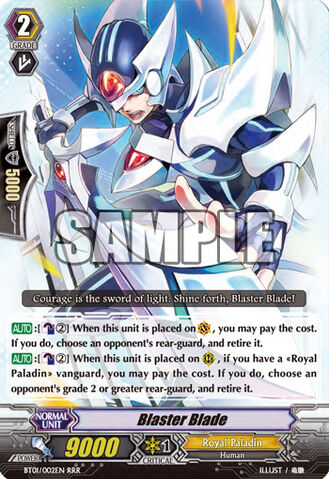 First, let's look at Wingal Brave's old partner, Blaster Blade. Most Vanguard players should be very familiar with the card already and its ability to retire a unit when it enters the field, but the 9,000 power that it comes with is actually Wingal Brave's primary weakness. If a Royal Paladin player is aiming to search for Majesty Lord by attacking with Blaster Blade, the attack only reaches 14,000 power. Why is this a weakness, you might ask? Well, if their vanguard is Blaster Blade, the strongest it can get to is 19,000 power from a drive check. Now, unfortunately you can only easily capitalize on this if you're going first, but if done properly you can shut their search down completely for the turn and you can even have a chance of grade locking them! The key to countering Wingal Brave is the 10,000 grade 2 vanillas in your deck, and using them to effectively tank Wingal Brave's pressure. Riding your 10,000 grade 2 before they ride Blaster Blade puts them in a really tough spot, since at that point it becomes extremely easy to guard their attack. Simply tossing away a 10,000 shield is all you need to shut them down, since Blaster Blade can't exceed 20,000 power with Wingal Brave. You need to be cautious with this strategy though, since Wingal Brave can trigger when the Blaster unit hits anything, including rear guards. Throwing rear guards out with less than 10,000 power wastes the efforts you put into your strategy and lets them get away with your search, so watch out for that.

Is this strategy completely useless if they're going first though? I wouldn't use useless to describe it, but the chances of it working are much lower. You can still guard with 10,000 and have basically any grade 1 to defend yourself, but if they get a trigger, the shield is wasted and they get their search. Not saying it's a bad play, but it's a risky one to attempt.

There is also another way to play around Wingal Brave, which is simply to remove it from the field. To accomplish this, let's look at two of the more popular clans of Dragon Empire: Kagero and Narukami. 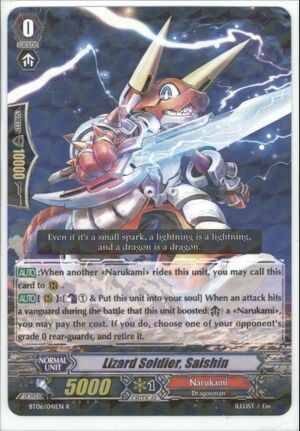 Both of these decks possess tools to eliminate starting vanguards that would put your opponent at an advantage. Narukami have their own starter that can do the work for them. Lizard Soldier Saishin is a grade 0 with 5,000 power. Like most starters it can call itself as a rear guard, and it also comes with a skill that goes off when it boosts. If it boosts a Narukami and the attack hits a vanguard, you can counter blast one, add it to the soul, and retire one of your opponent's grade 0 rear guards. This means that you can start with a card that can shut down Wingal Brave essentially by itself, which is awfully convenient . The card also has some other good targets to hit, including Kryph, Lizard Soldier Conroe, and more. However, this card once again relies on you going first, since if they ride their grade 2 first, they can quickly get Wingal Brave off of the field before you have the chance to snipe it. 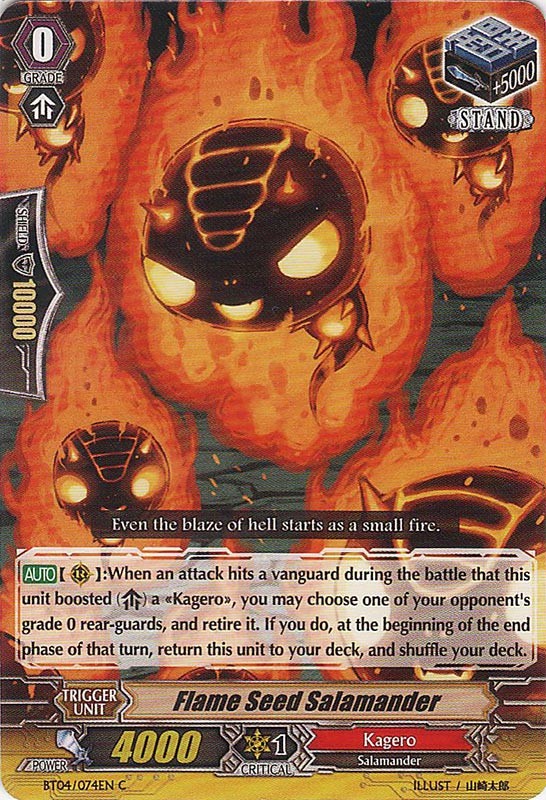 Now Kagero have two early game options when it comes to getting rid of Wingal Brave, and both are triggers. The first one, Gatling Claw Dragon, is a 4,000 power draw trigger that, at the cost of a counter blast, can send itself to the soul and retire any grade 0 rear guard your opponent controls. The second is Flame Seed Salamander, a 3,000 power stand trigger similar to Saishin, except when it boosts and the attack hits, there's no counterblast required and Flame Seed returns to the deck. Now, the former Gatling Claw Dragon is probably the most effective since it doesn't rely on having to succeed with an attack. However, requiring one damage means it'll only most effective when you go first, because once again, by the time they're dealing damage Wingal Brave will be gone anyway. Flame Seed Salamander is an okay counter, but it's very weak and hard to land a successful boosted attack, plus being a stand trigger can be less synergistic with Kagero unless you focus on Dragonic Overlord and his skill as a rear guard. Both of these cards are reasonable choices though, and it's up to the player to determine which one works best.

Moving on from these smaller units, there are a select amount of larger units that can get rid of Wingal Brave, albeit with a larger cost. Berserk Dragon and Dragonic Deathscythe are from Kagero and Narukami respectively, and they both come with identical effects. When they hit the field, you can counterblast two to retire a grade 2 or lower rear guard. Now this seems very useful for countering Wingal Brave, and can also get rid of dangerous boosters later in the game. The downside to using it as a counter is that you need two counterblast to use it, meaning your opponent needs to purposely knock you to two damage by the time you ride your grade 2 vanguard. If your opponent knows what they're doing, odds are they won't play as aggressively knowing what you can potentially unleash if they do. 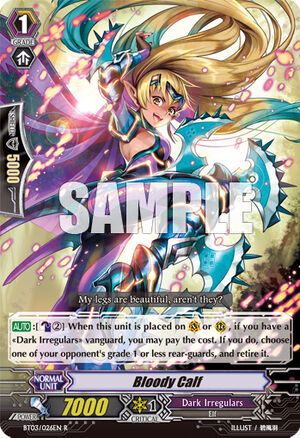 Other decks have cards that work similarly to these. Dark Irregulars have Gwynn the Ripper and Bloody Calf, where Gwynn is just like Berserk and Deathscythe and Bloody Calf is a grade 1 with 7,000 power, and can only retire grade 1's and lower. Blaster Blade and Blaster Dark can also get rid of anything when you ride them, but these all still point back to the requirement of having two damage, which means they won't be able to counter all the time.

While it feels like I'm overemphasizing playing around Wingal Brave, it should still be noted that this deck will be one of the best decks in the English metagame for a while, and some of the strategies discussed can be carried over to other decks, so it's still useful knowledge to hold on to. If you have any questions about the article, feel free to ask them in the comments below and I will try to get back to you. I hope this article helped your understanding of the metagame and the Majesty Lord deck, and as always, thanks for reading.