Hello everyone! I’m back this week to discuss one of my favorite ways to play Yugioh, which I hope will spark some new found interest in the area at events! Have you ever found yourself looking through your collection and found the likes of Red-Eyes Black Dragon, Elemental Hero Flame Wingman, or even the fabled Dark Magician? Well you’re not alone, because everyone has seen these old-school cards and wished they could put them to use at least once in their dueling career! If you’ve ever watched a live action Yugioh series, then you probably have a favorite character that was showcased in one of the many branches of Yugioh! Whether you’ve been watching Yugioh since Yugi was the main protagonist and Kaiba was the primary antagonist, or when Yusei Fudo and Jack Atlas were rivals, character dueling will surely be something fun and exciting to participate in!

Deciding on Your Character

Unlike building a deck in an actual format, picking your character deck is as easy as picking your favorite character from the show! My personal favorite character is Joey Wheeler from the original series, but I’m also a huge fan of Jaden Yuki from Yugioh GX. Since I like both of these characters I built both of them to character duel with! In my area character dueling is quite popular, which means we do not want there to be too many duplicate decks. Since we don’t want too many mirror matches, most players decided to “call” a player and stick with them (if someone wanted to play Kaiba and someone else already had Kaiba built, you would have to find someone else to play). Obviously you can build whomever you want, because after all character dueling is all about having a good time! If you’ve found your favorite character, then it’s time to begin constructing your character deck! For those who might be struggling to find a character to play, I recommend you watch some of the original Yugioh series online to find a character that you like.

Just like real life Yugioh, there is still a ban list in place for character dueling. However, the ban list in place for character duels differs greatly from our current forbidden and limited list as each character has their own ban list. If you want to find out what cards you are allowed to play, you can simply Google “Your Character’s first and last name Character Deck” and you will get a vast multitude of results. Towards the top of the page you should find a Yugioh Wikia page with the information you are looking for, click it and you will be redirected to a page with all of the cards your character is allowed to play. Since Yugi Moto is the most iconic character in the Yugioh series, I’ll use him as the example for building a character deck.

Knowing this, simply scroll past those three decks until you find “Grandpa’s Deck”, which was the deck that Yugi played in the Duelist Kingdom tournament in season one! Once you’ve found Yugi’s Duelist Kingdom deck you can view its contents on the Wikia page, and those cards can be used in any Yugi character deck. As you scroll down the Wikia page you will find more decks that Yugi played, which include “The Friendship Deck”, “The Battle City Deck”, “The Virtual World Deck”, “The Waking the Dragons Deck”, “The Grand Championship Deck”, “The Dawn of the Duel Deck”, and “The Yu-Gi-Oh! The Movie: Pyramid of Light” deck! 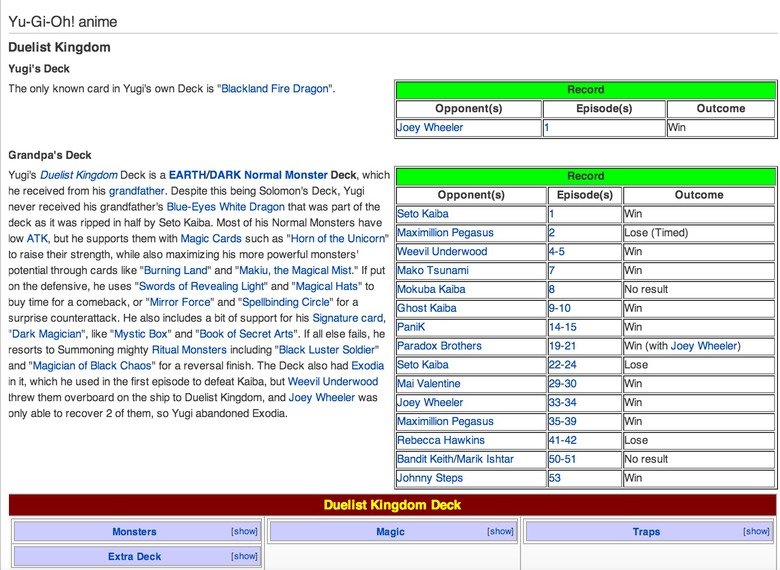 All of the cards in these decks are perfectly legal to play in your Yugi Character deck, which gives you a pretty big card pool to utilize in your deck. The remaining decks contain cards that generally spur debate about whether or not Yugi should be allowed to play Black Luster Soldier – Envoy of the Beginning (BLS) or Dark Magician of Chaos (DMOC), which general result in a ban on these cards. Yugi Muto is already powerful enough, because he contains almost all of the power spells, which include but are not limited to Pot of Greed, Graceful Charity, Monster Reborn, Change of Heart, and Premature Burial. My area elected to outlaw BLS and DMOC because we found Yugi to be too powerful with these cards supplementing Yugi’s already high power level.

It’s also highly recommended that you omit any cards from the Manga or Video game decks for your chosen character, because then characters like Jaden become too powerful, and defeat the purpose of character dueling. 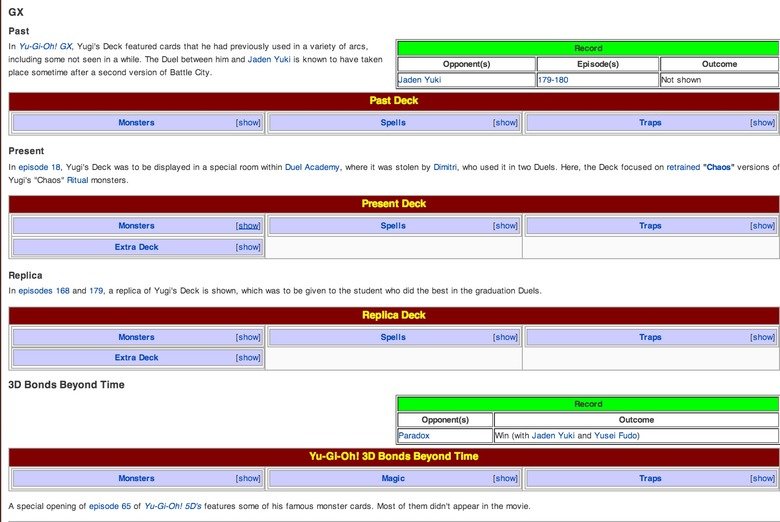 As you find cards that you’d like to play in your character deck it is highly recommended that you go onto Dueling Network and build your character deck on there. Using Dueling Network will allow you to easily organize your ideas for your character and will also give you excess cards that you may want to swap in and out as you play your character more. Often times a card will seem like complete and utter trash, but as you duel against other characters, you will find that cards like Horn of Heaven are actually relevant against certain match-ups. Seto Kaiba’s deck contains Chaos Emperor Dragon (CED), which is extremely devastating because it’s almost impossible to prevent in character duels. Yugi is one of the few characters that actually play an out to CED, which is a pretty strong argument for Horn of Heaven in my honest opinion. Aside from the fun that character duels provide, they can also help you improve your game in the actual metagame.

How Can Character Dueling Help You Get Better?

Looking at most character decks, you will notice that most of the monsters are lackluster, but the spells and traps are quite powerful, which means that it becomes integral that you get the most value for each play that you make. As you play against certain characters you will learn what their trump cards are, and as you gather this information it becomes very important to play around cards like Heavy Storm, Nobleman of Crossout, Magic Cylinder, Mirror Force, and much more! Learning to play around cards is very important to developing as a player because it will always be important to know how to play around a problem card in any metagame. 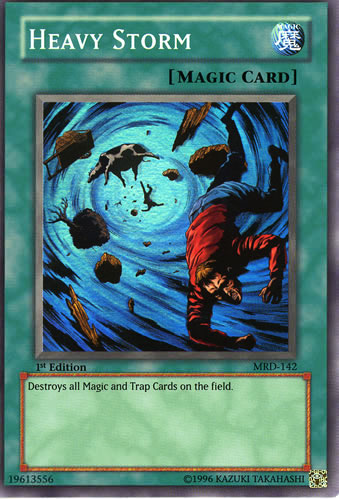 In the current metagame Nekroz players have to play around Mind Crush, which forces them to play at a higher level or risk getting crushed. Any player using floodgates like Mistake or Vanity’s Emptiness has been flipping them at their nearest convenience to play around Denko Sekka. Heavy Storm is unfortunately not in the current rotation of cards we are allowed to play with, but learning to play around Heavy Storm will prove to be useful as we still have cards that punish players for setting too many cards without protection (Exciton Knight, Black Rose Dragon, Storm).

Character dueling also helps you make reads, because the more you play against a certain character you will learn the cards in their deck and realize that they usually only have one copy of each card in their deck (some characters have more copies). For example I was character dueling against my buddy Shane a few days ago and this situation arose. First and foremost I was playing Jaden Yuki against his Seto Kaiba. Here’s the situation:

> For the past few turns my monsters were attacking with no rebuttal from Shane, which lead me to believe he was saving an attack stopper to stall for his Chaos Emperor Dragon, which was live.

> Since he had already used Ring of Destruction and Shadow Spell, the only attack stopper that Shane had left was Negate Attack, but I wasn’t positive he had it set.

> I swung my Elemental Hero Sparkman into his set monster and it was Giant Germ!

> Shane activated its effect, which told me two things. First and foremost he wanted to tribute summon for a Blue-Eyes White Dragon in his hand, because he needed two tributes for that monster. Secondly this all but confirmed my suspicion of him having a Negate Attack set because he brought out his Giant Germs in attack position and didn’t stop my first attack.

> Regardless, it was still correct to attack with my Elemental Hero Burstinatrix into his Giant Germ because I still wanted to eliminate his negate attack from the equation.

> Shane revealed Negate Attack and on his next turn tribute summoned for his Blue-Eyes White Dragon! 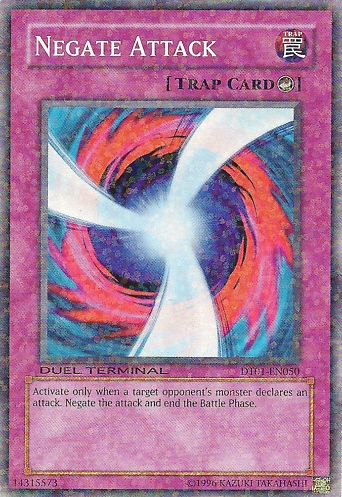 I sincerely hope that character dueling has sparked some interest amongst you all, and will create a fun way to kick back and enjoy Yugioh while the actual game gets stale. The 150th YCS in Columbus is right around the corner, which means you should all be testing extensively and working hard to top the event, because I know I’ve been working hard! If you would like to see more articles regarding character dueling please feel free to message me on Facebook, or leave a comment below. Until next time duelists, Play Hard or Go Home!