Choosing Your Flavor: The Grade 1 Vanilla

You are here: Home / Choosing Your Flavor: The Grade 1 Vanilla
Categories: Cardfight Vanguard
by Kyle Du

Ah, vanillas. Every card game has them and builds their foundation off of them. For those of you who don’t know, vanilla is a term used to describe a card which has no effect, but often times compensates for that with a higher attack or defense value. In Vanguard, the grade 0 vanilla has 6000 power, the grade 1 8000, and the grade 2 10000. These values are usually the highest power values for that grade, barring cards with higher attack but a negative card effect (such as Brutal Jack). Each clan has its own set of vanillas, and they form the basic structure of every deck. In fact every deck should run four of each grade 1 vanilla simply because vanillas have some of the coolest artwork in the game.

Just look at that badassness. Notice how the lack of a card effect leaves more space to absorb the awesome artwork and revel in its sheer beauty. Running four of them in the same deck gives you a higher chance to draw this card and spend the entire cardfight just staring at that piece of art. So, long story short, always play four of each grade 1 vanilla in your deck, unless you’re playing Granblue, because then you’re stuck with a wet zombie.

Why the Grade one?

Disregarding all card effects and even artwork, the Grade 1 unit is the most important unit in the deck because of its ability to fulfill the three roles of offense, defense, and support as well as its flexibility to switch between all three of those roles.  The grade 1 vanilla simply has the best power to conduct all three roles. The 8000 power grade 1 is king in the early stages of the game. Let’s take a look at the advantages of having a grade 1 vanilla in your opening hand.

Riding the vanilla as your grade one ride gives you an 8000 power vanguard and a very important advantage early on.

In all these cases, your opponent has to either make poor choices to attack your vanguard, or refrain from calling any rearguards at all and reduce his offensive push.

Furthermore, if your opponent rides a weaker grade 1 (such as a unit with 7000 power or a perfect guard), it becomes incredibly easy to guard the vanguard attack. In most cases, a 5000 power starting vanguard boosting a 7000 or 6000 grade 1 vanguard against your own defensive 8000 vanguard can be easily blocked for no triggers by dropping a 10k shield from your hand. This tactic is great at warding off random early critical and other such nonsense. (This does, however, lock you out of counterblast usage on your following turn).

If you are going second and you ride your vanilla, then you are open to a lot of options. You choose to put your starting vanguard to the side and use it to boost another called rearguard and can attack with your vanguard without a boost and still hit the opposing vanguard. Or you can leave the starting vanguard behind your grade 1 vanguard and attack for a strong column that is unlikely to be blocked.

And so, the grade 1 vanilla has tightly secured his throne as the reigning ruler of the early game.

Or at least until this guy and all his siblings came along. 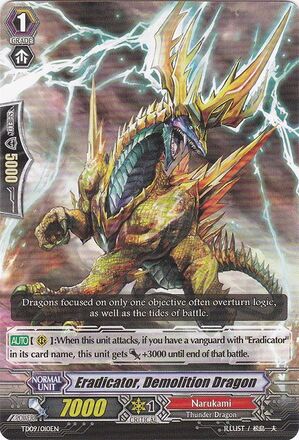 For those of you who are too lazy to read card descriptions, the basic skill of these types of units reads as follows: “When this unit attacks, if you have a vanguard with (insert name of a subclan here) in its card name, this unit gets (sword) + 3000 until the end of that battle.”*

“So what?” some of you may say. “Swordsman of the Explosive Flames, Palamedes practically gets his + 3k under all conditions. There’s nothing new here.” But the biggest difference between Palamedes and Demolition Dragon and crew is their grade.

You see, Vanguard has this rule stating that you are not allowed to call rearguards with a higher grade than your vanguard. This means that you can’t call your grade 3 Palamedes when you just rode your grade 1 (not that Palamedes would get his effect at that point). But you can call cards like Demolition Dragon and have a 10k attacker as early as turn 1, and the implications of this are huge.

Having a 10 k attacker so early on in the game effectively nullifies the defensive power of grade 1 vanilla vanguard. Before the release of these cards, riding an 8k mostly meant that you were safe from rearguard pokes early on in the game. But now, riding the grade 1 vanilla just means that your opponent can call two of these guys and stomp all over you. Even the grade 2 10 k vanilla isn’t safe from these attackers. And the most insidious part about Demolition Dragon and his clones is that it is incredibly easy to fulfill their effect condition. All you have to do is ride a vanguard of a certain subclan. That’s it. If you construct your entire deck based on a subclan, then you’ve pretty much been rewarded by getting free 10 k grade 1 attackers.

But before we dismiss the grade 1 vanilla, let’s not forget the other role a grade 1 can play besides being an attacking rearguard or a defending vanguard; the grade 1 is invaluable as a booster to help facilitate good rearguard columns. A good column is comprised of two rearguards, an attacker and a booster, whose total attack power forces the maximum amount of shields from your opponent for the lowest total value. Against a defending 10k vanguard a good rear guard column would have a total power of 10k, 15k, or 20k. etc, and against an 11k vanguard, a good rearguard column would have a total power of 11, 16, or 21k. Each of those values forces 5k, 10k, and 15k shields to be used to guard their vanguard. (As a side note, it is important to always optimize your field as if you were playing against an 11k vanguard, because if you set up your field for a 10k vanguard and your opponent rides an 11k vanguard, your field has suddenly become a giant mess).

This is where the g1 vanilla really shines. By providing an 8 k boosting rearguard, it becomes easier for the player to construct those good columns.

At this point, you may be thinking “Well, why don’t I just include 4 of this vanilla in every deck then?” The answer is no, and the reason is cards like this 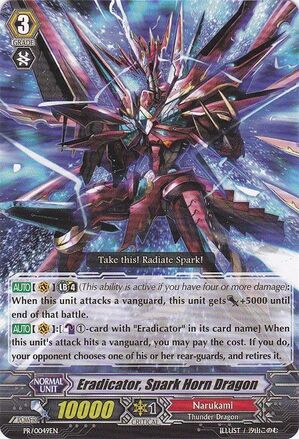 In set 11 (and in a few previous promos) we get a plethora of cards with very good effects, but a limitation on paying their cost. That cost is known as “especial counterblast,” which is a counterblast that is paid with a specific type of card, usually belonging to a subclan. Later on in set 10, we get cards with especial discard costs (think Eradicator, Dragonic Descendant). These especial costs clash with grade 1 vanillas because none of the grade 1 vanillas belong to a subclan, and they cannot be used to pay these especial costs. This means that running those grade 1 vanillas will put you at risk for not being able to activate effects like Eradicator, Spark Horn Dragon for reasons as trivial as damage checking a Red River Dragoon.

This does not mean, however, that you should forgo vanillas altogether if you choose to play a subclan. What it means is that you have to be able to judge how many non-subclan cards you can include in your deck before it starts to interfere with your decks functioning. Damage checking one vanilla may not be so bad when cards like Spark Horn only require one especial counterblast, but when cards like Eradicator, Gauntlet Buster Dragon require two especial counterblast, you may find yourself crying when you’re  at two damage and have a Red River Dragoon in your damage zone.

But even more importantly, never leave out those 8k vanillas if it interferes with your deck’s ability to make good columns. Vanguard is a game that is focused on raw attack power at its heart; a deck filled with flashy cards with good effects but hits for low numbers with its rearguards can still lose to a deck that consistently creates powerful rearguard columns that overpower an opponent’s vanguard. The biggest example of a deck in need of grade 1 vanillas would be a deck that runs a lot of 8k grade 2s. You need those vanillas in order to create 16k columns with those grade 2s, without which you would be attacking with pitiful rearguard columns.

The purpose of this article isn’t to give a specific recommendation on whether or not to include certain cards in your deck; rather, it is a guideline outlining the pros and cons of making a certain card choice that you, the player, have the final say on. So the next time you decide to build a deck, don’t simply throw away your vanillas just because you’re playing a subclan, or pack four of the each vanilla just because “they’re good.” Contemplate the function the grade 1 vanilla will play in your deck. Weigh the pros and cons of including it or excluding it. And for heaven’s sake, please don’t play a card simply because you like its artwork.

* a subclan is a group of cards from the same clan, but share a specific name, such as “Eradicators” for Narukami or “Liberators” for Gold Paladin

My name is Kyle Du, and I am an avid vanguard player from New York. I started my vanguard journey when Set 6 Breaker of Limits was first released. Since then, I have had the chance to play against a multitude of decks and players as well as construct many decks of my own. While most of my tournament experiences have been limited to that of local competitions, I hope to participate in bigger and bigger Vanguard events. My Vanguard goal is not only to be a better player by winning events, but to grow as player in both technical skill, such as playing the game itself, and tactical skill, such as deck building and deck theory.