Clash of Rebellions: New Cards for the 25k

Hey! What’s Up? Hello! This week I saw it very fitting to discuss some of the brand new cards that were just released in the new Clash of Rebellions (CORE) set. It has been quite a fast summer with plenty of events to participate in, but there simply has not been any significant set release. As much as I would have liked to say Dragons of Legend 2 (DRLG2) was a good set, it really wasn’t. One might think that a sequel to the original Dragons of Legend Set would contains cards with equal or greater power than that of the Hands, Soul Charge, Mathematician, and even Kuribandit, but DRLG2 seemed to be nothing more than a collector’s set. As the summer has progressed, nothing has really changed in terms of decks being represented at Premier events. This has a lot to do with the fact that there has not been anything to measure up to the best decks from the past year. With the release of CORE, duelists everywhere in the TCG can rejoice as this set introduces some brand new cards that will surely spark the flames of change. Will this change be for the better, or worse?

Lets take a closer look at some of cards that are not Archetype specific shall we! Archfiend Eccentrick (Eccentrick) is the first of quite a few cards I would like to discuss. Eccentrick is quite the significant release because it has two very powerful effects that will make it a very promising side deck choice in almost every single deck. Eccentrick’s first effect, which can only be used while in the ‘monster zone’ allows it to tribute itself and destroy any monster on the field! His secondary effect only works while he is in the Pendulum zone; Eccentrick’s pendulum effect allows him to destroy himself and any other Spell/Trap on the field. With these two effects, Eccentrick can solve just about any problem your opponent might throw at you! Archfiend Eccentrick is particularly strong against Qliphort because he can combo well with the powerful quick-play spell, Wavering Eyes. Wavering Eyes was released early in the most recent Special Edition pack, which means the metagame has already had some exposure. For anyone that has been living under a rock these past few months, Wavering Eyes allows you to destroy every card in both players’ pendulum zones. For each card that is destroyed Wavering Eyes gains an additional effect (It’s important to note that you get to use every effect leading up to the number of cards that are destroyed). If one card is destroyed, then you burn your opponent for 500 life points. When two cards are destroyed, you are permitted to search your deck for any Pendulum monster. Should you destroy three cards, you can banish a card on the field. Last but not least, if you destroy four cards you can add another copy of “Wavering Eyes” to your hand! 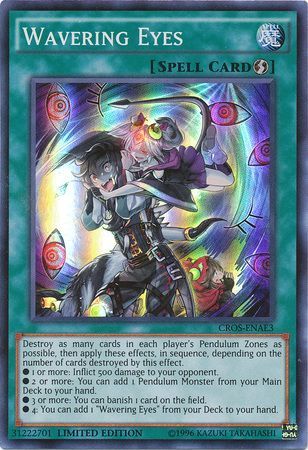 “Where does Archfiend Eccentrick come into play?” By using the second effect of Wavering Eyes, you can search Eccentrick for free! Not only will Wavering Eyes mess up your opponent’s pendulum scales, but you will be able to search your deck for an answer to any floodgate monster or Spell/Trap that they might put into play (Outside of Majesty’s Fiend).

The next card I would like to cover is Chicken Game (more commonly known as Chicken Race). Chicken Game is a field spell that grants both players access to its three abilities. The first effect allows the user to draw one card from their deck as long as they pay 1000 life points. This is the only super relevant effect, because Chicken Game is going to be particularly used in FTK/OTK decks. There is a vast multitude of ways to pull off this FTK, but only if Royal Magical Library (RML) is legal for play. Since ARG banned RML you will not need to worry about losing before you can make a play, which should come as a sigh of relief! 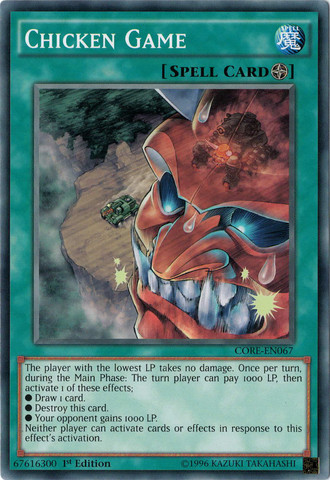 Last year around this time, the powerful Burning Abyss monsters were released in Duelist Alliance and they are still seeing play to this very day! Aside from their ability to throw incredible amounts of damage on the board with very little effort, they are all floaters, which means when they leave they will replace themselves in some way. The fact that the Burning Abyss monsters are all floaters made cards like Mirror Force and Torrential Tribute horrible against them. Enter, Storming Mirror Force! Storming Mirror Force is a new and very solid solution to dealing with the Burning Abyss deck. Instead of destroying the attacking monsters, it returns them to the player’s hand! Finally there is a battle trap (Besides Dimensional Prison) that can completely decimate a Burning Abyss player’s assault on your life points without putting you behind in cards. I’m very excited to see how many players choose to use this interesting new trap card in their side, or even main decks! Lets face it, everyone is getting very tired (Myself Included) of Nekroz winning event after event and with the new changes to the ARG ban list, it doesn’t look like the deck will be performing any less than it did prior. Since Mistake was put to one and Vanity’s Emptiness has been banned in this format, there have been fewer solutions to completely locking this deck out of play. With the release of CORE, players can feel a small sigh of relief as Mistaken Arrest gets released. Mistaken Arrest is essentially a quick-play version of Mistake that lasts until the end of your next turn (The Player Who Activated Mistaken Arrest). With three more ways to prevent Nekroz from searching, players all around can hope to see less Nekroz decks in the top cut of the 25k!

What kind of new archetypes came out in Class of Rebellions that I should expect to see? Since Joey Wheeler is one of my very favorite characters from the popular Yugioh television series, I’d love to discuss the new Red-Eyes deck! Blue-Eyes White Dragon is arguably the most recognizable Yugioh monster in the history of the game right next to Dark Magician. Even people, who do not play the game, think of these monsters before any others when/if Yugioh is brought up in conversation. What about Red-Eyes Black Dragon? How come nobody remembers him? Red-Eyes Black Dragon was not used by either the main protagonist (Yugi) or antagonist (Kaiba); it isn’t very hard to figure out why Red-Eyes Black Dragon is not as memorable. As Yugioh has aged as a game, random pieces of support for Dark Magician and Blue-Eyes White Dragon have been released, but nothing for good ole Red-Eyes Black Dragon. Well, not until recently! Even the Dragons of Legend 2 set gave Red-Eyes a few new tricks, but nothing to be too excited about. The Red-Eyes support cards in Clash of Rebellions are sure to tickle a few players’ fancy as they allow you to put massive amounts of damage on the field along with a built in draw engine.

Black Stone of Legend is essentially a Lonefire Blossom for “Level 7 or lower” Red-Eyes monsters besides Red-Eyes B. Chick, which pretty neat, but its secondary effect is even cooler! While in your graveyard, you can target “Level 7 or Lower” Red-Eyes monster (Besides Red-Eyes B. Chick) in your graveyard, shuffle the Red-Eyes monster back into your deck and then add the Black Stone of Legend back to your hand! The only limitation of this card is that you can only use one of its two effects per turn. Black Metal Dragon, the next Red-Eyes Support card, is more parallel to that of White Stone of Legend. Black Metal Dragon (BMD) allows you to add any Red-Eyes card from your deck to your hand (Except Red-Eyes Black Chick), when it is sent from the field to the graveyard. Additionally, BMD can equip itself to other Red-Eyes monsters from hand, which will give them 600 more attack points. CORE released Gemini versions of the original Red-Eyes B. Dragon and Summoned Skull cards in an attempt to make better versions than the originals. The new Summoned Skull, Red-Eyes Archfiend of Lighting, has the Gemini effect of destroying all monsters your opponent controls with less defense points than this card’s attack points (2500). The new Gemini Red-Eyes monster, Red-Eyes Black Flare Dragon, has the Gemini effect to inflict damage equal to its original attack (Once per turn) after damage calculation at the end of the battle phase.

The Red-Eyes deck has much more than monsters, with two brand new spell cards, this deck is slowly gaining enough fuel to compete! The first spell, Cards of the Red Stone, says 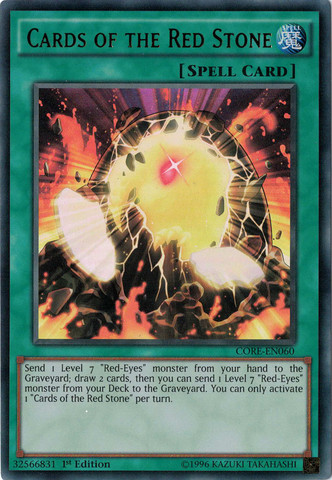 Cards of the Red Stone is perfect for the Red-Eyes deck because this deck is going to need to play at least 3 copies of Red-Eyes B. Dragon. Normally drawing a Level 7 normal monster would not be very good, but with Cards of the Red Stone in the picture you can fix your hand, thin your deck, and hopefully draw into some combo pieces. The second Red-Eyes spell will probably not see too much play because it will force you to play more copies of less optimal cards (Red-Eyes Archfiend). Red-Eyes fusion allows the player to special summon a fusion monster that lists “Red-Eyes B. Dragon” as a material. The key component to this card is that it allows you to fusion using cards from your hand, deck, and monsters in your graveyard! The major drawback to using this fusion spell, is that you cannot Special Summon before or after you use this card, which is the biggest reason why I don’t see Red-Eyes fusion being a key player in this deck’s success.

The last new Red-Eyes monster comes in the form of a generic rank 7 known as Red-Eyes Flare Metal Dragon (RFD). RFD has three very strong effects, which make it an absolute staple in this deck! RFD reads,

“Cannot be destroyed by cards effects while it has Xyz Material. While this card has Xyz material, each time your opponent activates a card or effect, inflict 500 damage to your opponent immediately after it resolves. Once per turn, during either player’s turn: You can detach 1 Xyz Material from this card, then target 1 ‘Red-Eyes’ Normal Monster in your Graveyard; Special Summon it. “

These two effects are both incredibly relevant for the Red-Eyes deck because they both enhance the “go for game” strategy that this deck seems to thrive on. If you summon RFD who is at 2800, and then use its effect to bring out a 2400 Red-Eyes B. Dragon that’s already 5200, which will most assuredly be supplemented by Red-Eyes Black Flare Dragon’s effect to burn for an additional 2400 (if this card has it’s effect). All together that’s 10,000 points of damage, which would allow you to kill your opponent through one to two monsters, or even additional life you may have given them off of Upstart Goblins.

The 25k is rapidly approaching, are you ready for this event? Have you done the research on the new cards and play tested 80 hours a week? I sure hope so! I hope to see everyone there! As always, Play Hard or Go Home!

Cardfight!! Online and the Future of the Game
The Scoop: Final Bosses(Feat. Noah Greene)
Our Contributors