Kaijudo Championship qualifiers Joe Bass, Todd Anderson, and Dave Pendergrass have opened the community's eyes to a very intriguing new archetype: LWD Tempo. Initially concocted by Gerry Thompson, the deck aims to take advantage of the efficient creatures available in the Esper shard. LWD Tempo systematically picks apart the opponent's setup, while constantly threatening to get in for shields when the opportunity presents itself. If left unchecked, the forward momentum is too much to overcome. The LWD Tempo player's eventual aggression is buoyed thanks to contributions from all-stars like [ccProd]General Finbarr[/ccProd], [ccProd]Cyber Scamp[/ccProd], and [ccProd]Keeper of Laws[/ccProd], ensuring a steady flow of broken shields and a fresh hand of cheap threats.

What I have noticed in the wake of this deck's success, however, is that the concept of "tempo" is very much misunderstood by the Kaijudo population at large. I've seen people refer to LWD Tempo as both an aggro deck and a midrange deck, and neither is entirely true.

Incremental Gains Must Result from Offense 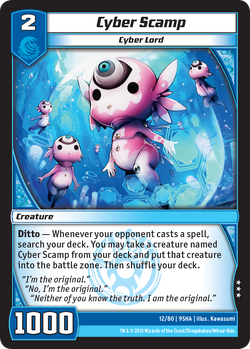 Every well-thought out Kaijudo deck has a self-imposed clock. The relative strength of boss creatures in this game increases exponentially once we pass the 7 and 8 mana threshold. For this reason, a deck like LWD Tempo cannot survive on "plus ones" alone if its pace is glacial. You need to break shields. Your card advantage might be there (especially if the opponent is ramping), but your card quality won't be there. Light, Water, and Darkness creatures all lack the Fast Attack keyword (unless split with Fire), so a surprise win is out of the question for this kind of deck. You need to lay all your cards on the table, both literally and figuratively.

Knowing this, we can infer that if we're not piloting a control list in the current metagame, then the ability to curve out from turns 2 to 4 is critical. You'll have to dedicate a significant portion of your creature base to the lower-end of the spectrum to achieve this, however, and drawing early game powerhouses like [ccProd]Lost Patrol[/ccProd] in the twilight turns is not going to help you if you aren't already winning.

That being said, it isn't about speed so much as pace. You're not a rush deck. Rush decks just say "damn the torpedos" and shatter shields as quickly as possible, with no regard for the opposing creatures (beyond tapping or otherwise temporarily incapacitating them). A tempo strategy needs to be mindful of the battle zone, and needs to pick its spots. You're often the beatdown, but you're also more apt to gift your opponent with free cards in bursts rather than through a steady stream. 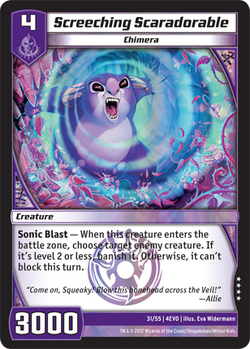 There's a misconception out there that card advantage and tempo are opposing forces. Sometimes, this notion is true. You can cast a card like [ccProd]Logos Scan[/ccProd] on turn three to net a card, but you've sacrificed tempo in doing so. If you didn't summon a creature on turn 2, you're not going to be able to break a shield until turn 5 at the earliest. You might have just given your opponent an extra two turns to live. The same can be said of casting [ccProd]Maddening Whispers[/ccProd] on turn 5. You just disrupted your opponent's next couple turns and came up a card in the process, but you forfeited the potential to possibly commit two additional creatures to the board, or at least one potent one that the opponent can't ignore. Now, the guys you already have on board need to carry you to the finish line, because the control opponent is going to topdeck better than you if your attacking force is undermanned.

This brings us to the crux of the tempo concept: the idea that we can marry the two. There are a handful of creatures that allow us to commit a threat to the zone while instantaneously furthering our battle zone supremacy. When we start two-for-oneing in the battle zone without having to slow our assault, we inch closer and closer to the finish line. The name of the game is putting more shield breaks into play than our opponent can deal with in the time he or she has left. We might be accruing "hard" card advantage ([ccProd]Screeching Scaradorable[/ccProd] eating a 2-drop, sending [ccProd]Lost Patrol[/ccProd] over the top of a tapped creature, getting a free Scamp into play, [ccProd]Keeper of Laws[/ccProd]), or temporary, incremental advantage (the bounce that [ccProd]Piercing Judgment[/ccProd] and [ccProd]General Finbarr[/ccProd] provide), or we might just be maintaining card parity with our opponent ([ccProd]General Finbarr[/ccProd]), but we're doing so without taking a turn off.

Turns 4 through 6 are the blueprints that directly produce the shield breaks we will use to win the game. Having true card advantage over the opponent isn't as important as making sure we are owning the battle zone, with cards in hand to spare. 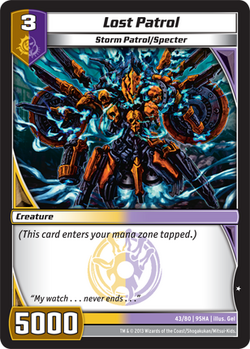 Because creatures can attack tapped creatures in Kaijudo, your relative strength in the zone is dependent upon who has the largest creature. Unless one player has enough small guys to go for game without fear of devastating revenge kills, the player with the larger creature is the one who sets the pace. This is why the multicivilization 3 mana vanillas are constructed-worthy right now -- they come down early enough to deter rush decks to a significant degree, and they're bigger than the most common blockers in the environment. As soon as [ccProd]Lost Patrol[/ccProd] or [ccProd]Sword Horned[/ccProd] hit the board, anything smaller than a level 6 creature is on notice.

Winning the Race with Invested Beats

You are solely including creatures that either (a) do something to the board state beyond just being a creature, (b) are larger than opposing creatures so they can attack more freely, or (c) have some built-in invulnerability. 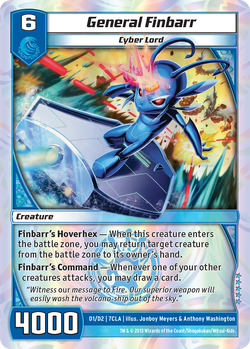 The key here is to win the race not by breaking shields quicker, but by investing in beats that may not pay off until later. If you keep investing in attackers, you can then "cash in" when you're able to summon a [ccProd]Screeching Scaradorable[/ccProd] or [ccProd]Rusalka, Aqua Chaser[/ccProd], removing a potential blocker or swingback candidate. That [ccProd]Cyber Scamp[/ccProd] of yours may have been held off by an [ccProd]Aqua Strider[/ccProd] initially, but its ability gives it resiliency, and helps a copy stick around long enough to cash in later on.

Creatures like [ccProd]Rusalka, Aqua Chaser[/ccProd] and [ccProd]General Finbarr[/ccProd] are especially unforgiving in Kaijudo if you can curve out while on the play and dodge early shield blasts. Your opponent is trying to deal with your faster-developing board, and you keep setting him or her back while still getting instant gratification. There are times where you can draw an unstoppable progression if your opponent's shields cooperate. Playing a creature is an investment in your board state for later, but bouncing your opponent's creature is a play very much centered on the now. If that bounce effect happens to be strapped onto a creature's body, your opponent still has to pay mana yet again if they want their creature back, but likely won't have enough mana to both do that and deal with your bounce creature.

From your opponent's perspective, hard removal in this game is expensive. As long as you're winning the race, though, hard removal isn't always necessary on your end.

A tempo deck isn't possible without some very specific kinds of creatures, so you can thank the wonderful [ccProd]General Finbarr[/ccProd] for allowing these strategies to flourish. Control the pace of the game by incrementing your advantage through threat of aggression. Have a concise curve. Play big dudes. Play guys that draw you cards or mess with your opponents drops. Cash in when you see an opening. There are a lot of ways to go under the current control decks. If you've been getting abused by [ccProd]Andromeda of the Citadel[/ccProd] and [ccProd]Eternal Haven[/ccProd], give LWD Tempo a shot!