(Fire) Birds of a Feather Flock Together Wizards of the Coast made sure to end the Rise of the Duel Masters block with a bang. Just in time for Kaijudo Master Challenges, DragonStrike Infernus – though a small set – introduces a number of incredibly powerful cards whose impact on the metagame has been immediately felt. While the Evo Fury environment was categorized by timed aggression and fast attackers, the current meta heavily favors control strategies that aim to dominate the late game. How could such a shift have happened with the introduction of a mere 60 cards?

I’m sure you can infer that the 9-cost Dragons are the stars of the show in 6DSI, but the Fire Birds are the ones that make the trains run on time.

The Fire Bird cycle has been making waves in the new environment, but why? There are some apparent downsides to playing these guys over the typical low-cost fare popularized in the Evo Fury meta:

Despite these seemingly negative factors, having ramp and an additional late game threat all wrapped up into one package is undeniably powerful. The fact that each Fire Bird is a creature will oftentimes be a benefit if you play correctly. Certainly, if [ccProd]Sprout[/ccProd] let you choose between adding one mana or breaking one shield, it would be an infinitely better card. Fire Birds can potentially do both. Putting a body on board is never a bad thing. 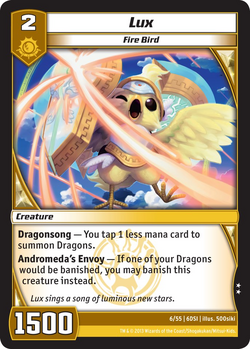 To get the maximum benefit out of the Fire Birds, you’ll find yourself wanting to play multiples. [ccProd]Lux[/ccProd] can be played solo, since he gives you the most bang for your buck in all stages of the game. The others, however ([ccProd]Nix[/ccProd] in particular), love company. Considering that the Fire Birds span from 2 to 4 in cost, you need to make a conscious decision to completely forgo offense in the early game if you decide to load up. How many Fire Birds should you play in a late-game focused Dragon deck?

WFL (WATER/FIRE/LIGHT) Dragons is a popular choice in my area right now, so let’s use it as our example. The corresponding Fire Birds you could possibly include in this deck cost 3, 4, and 2 respectively.

These 3 creatures are from 3 different civilizations, so reliably unlocking all colors in sequence will likely require a pretty even split of civilizations. Given the current card pool, you’ll be making some undesirable finisher concessions if you constrict yourself to a 15-15-15 split of Water/Fire/Light. Even so, 3 civilization decks are simply more prone to mana problems in the early turns by their very nature.

What if, on turn 2, [ccProd]Lux[/ccProd] and [ccProd]Andromeda of the Citadel[/ccProd] are the only Light creatures in your hand, and you have [ccProd]Nix[/ccProd] and [ccProd]Kenina[/ccProd] as follow ups? If you don’t summon [ccProd]Lux[/ccProd] right now, then the benefit of maxing out on Fire Birds is diluted. Certainly, you could throw Andromeda into the mana zone (if you play 3 copies of it) and just hope for the best. But isn’t the potential to summon a 9 drop creature on turn 6 the entire reason we would consider loading up on Birds? You always want to have one waiting in your hand.

Now think about the same scenario, but this time you’re completely Light flooded and don’t have another Fire or Water card in hand besides the [ccProd]Nix[/ccProd] and [ccProd]Kenina[/ccProd]. 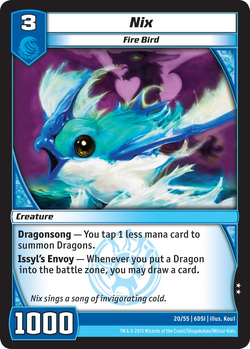 You could also find yourself putting your Dragons in the mana zone to unlock all your colors for the ideal “Bird curve,” but then never drawing another Dragon until the late game anyway. Now you’ve wasted potential game enders, and even 3 Fire Birds may not be enough. Adding more Dragons to your Deck may seem like a sensible way to mitigate this potential problem, but now you’re looking at the possibility of completely unworkable opening hands. 3 color decks are already tough enough to keep around 40 cards as it is!

Not only that – [ccProd]Herald of Infernus[/ccProd] singlehandedly makes your opponent unable to capitalize with 3-drop “swing trigger” creatures like [ccProd]Razorhide[/ccProd] and [ccProd]Aqua Seneschal[/ccProd], and he only becomes better if you can play him on turn 4. 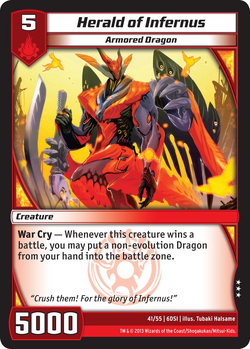 This works both ways, however. Be aware that every Fire Bird you summon is one opposing [ccProd]Herald of Infernus[/ccProd] away from causing you serious problems if your opponent has a timely Lyra. That fear is very justified, and that fear alone gives me more pause than simple consistency concerns.

Creatures with less than 5000 power: you're on notice.

There's also always the looming concern of mass removal banishing all your Fire Birds at once. The likelihood is a little less than you might think, given that you will very rarely be attacking with your Fire Birds until the late game, so Shield Blasts won't be triggered until after they've already done their part. [ccProd]Tendril Grasp[/ccProd] is also a pretty insignificant threat; while you'd certainly rather keep your Birds, if your opponent pays full price for one, you can just follow up with the same exact Dragon next turn you would have played anyway, thanks to all that fresh mana. Maybe it won't be protected, or maybe you won't get a free draw, but you'll still have the tempo on your side.

Beware of the turn 6 [ccProd]Barrage[/ccProd] if you are on the draw, though. A hard-casted [ccProd]Barrage[/ccProd] can quickly undo all the groundwork you laid, unless you were able to summon a [ccProd]Lyra, the Blazing Sun[/ccProd] on turn 5. If you did, you have a chance to stabilize if you can just hold on and summon an additional Fire Bird on your turn 6. [ccProd]Chain-Lash Tatsurion[/ccProd] is also clutch here, allowing your Lyra to peck off an opposing Fire Bird in the mirror and "reset the race."