Hello everybody! My name is Philip Lai; the publicly proclaimed "Dragon Master" of Toronto, Canada. I've been playing Cardfight!! Vanguard since the initial English release of the game, and have been playing actively in the community ever since. From playing Vortex Dragon to Vermillion and finally to DoTE, my expertise regarding dragon decks is second to none, and I'm happy to be able to share my knowledge with you all.

Today I'll be talking about one of the well known keystone cards within the Kagero clan, which happens to be Flame of Hope, Aermo. Aermo has always been considered an absolute staple in most kagero decks, and has always been the go-to card regarding Conroe's famous search skill.

Note that his hair is green

Normally, searching and calling an aermo behind your vanguard on your second turn will result in aermo's effect activating at least twice within the next two turns, allowing you to cycle through your deck by discard unneeded "dead" cards while drawing into useful "live" ones (in fact, a second or third aermo on the rear-guard circles can exponentially increase your cycling output!). Those new cards will give you a slight edge against your opponent, since those new cards will open up new options and help in field-setup.

Remember when the game first came out and Dragon Monk Goku  was  one of the most dominant decks in the game? Not only was he a 10 dollar deck (who played perfect shields in set 1?), but he was one of the only few at the time who could take on the infamous barcgal blade deck. In case you weren't there for those times (it's okay, it means you didn't have to deal with that barcgal crap),  Goku was essentially a deck that played 10+ grade 3s in order to uncontrollably retire his opponent's rear guards until nothing was left  standing. While he was around, boosters weren't safe, and with best friends Berserk Dragon and Dragonic Overlord, the front row wasn't safe either! Essentially playing 25+ triggers, most games for Goku were extremely one-sided, and nobody could deal with his destructive power until the later sets. However, the biggest flaw behind Goku was the fact that the deck played more than 10 grade 3s! Even in today's format, too many grade 3s equals to a shortage of shield and virtually no defense. 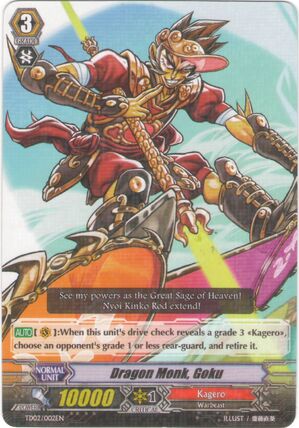 And so, this is where aermo comes in. For every attack that hits, the billions of dead grade 3s in your hand quickly become live cards you can guard with, and with 2-3 aermos on your side of the field, your whole problem is solved. Without aermo, the consistency of this deck would have pummeled and would have been considered a "coin flip" deck you would play for fun rather than a competitive one.

This critical idea of "no dead cards" has stuck with all kagero players ever since these times. However, instead of cycling out dead grade 3s as Goku would, players have begun to cycle out other unwanted cards such as draw triggers and unneeded boosters to further improve game performance. Kagero players also have realized that they have the option of teching certain cards to help against unfavorable matchups (such as Heatnail Salamander) and simply ditch them with aermo if they aren't needed. In fact, a few other clans such as Narukami have also adapted to this idea and begun playing their own versions of aermo. To this day, the majority of clans have an aermo copy, and all of them have the option of playing them if they would like.

However, i'm sure you've noticed by now that they don't! Aside from the few narukami players teching their Helena copies, Kagero is the only clan that actively plays the aermo copy, whether it be in a single or multiple copies. So then, the question is why? It's been established that aermo cleans up your hand and sets you up for a smoother game so why doesn't everybody just play aermo?

The cold harsh truth is that while aermo has it's benefits, it also has it's flaws. The first issue is that aermo is a 6k booster. Normally, behind the vanguard, aermo can easily hit 16k which narrowly hits numbers against 11k vanguards, but on the rear guard, there are times when it will be paired up with a Berserk Dragon or Bellicosity Dragon. Against an 11k vanguard, that simply won't do, and against 13k vanguards, and even though it may have given you a card cycle or two earlier, hitting your opponent's vanguard for a 5k guard on one of your side columns will put your endgame at a sever disadvantage. In fact, this issue is significantly worse when dealing against cross-ridden vanguards, as hitting 18k on your vanguard and rear guard columns with aermos everywhere will be virtually impossible. Simply, the best chances you would have hitting 13k would be with your own cross ride DoTE with burning horn dragons on the side, but for everything to go right like that, you might as well put your luck on flipping a 6th damage heal. Back in the day when Goku was around, virtually everything was a 10k vanguard (some even 9k!), so goku never had that problem that we had. 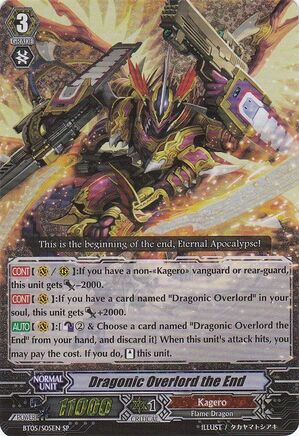 The other issue is that aermo's effect strictly speaking does NOT net any real advantange. Discarding a card to draw a card puts your net advantage at a +0, which means that card-wise, you went absolutely nowhere! In fact, to make matters worse, after discarding a card, the card you drew may have put you even further behind the game. In most case scenarios, a 5k guard draw trigger will be discarded for the effect. If you draw into a trigger, it means you gained 5k worth of shields, but lost a potential trigger from your deck. If you drew a grade 3, you just backtracked! Mathematically, grade 1s and 2s make up around 50% of your deck, which means that your chances of aermo's effect helping you is only 50%. Note that trying to fish for a specific card is even lower, so if that's the case, you might as well just scratch some scratchcards.

Overall, aermo has it's benefits, but there are also it's huge flaws as well. In fact, all of aermo's benefits can be manually created in normal game play. If you have an issue with too many grade 3s, they make great attackers perfect guard fodder. If you have a tech card against a normal matchup, just use it as you normally would or as guard. If you don't have an attacker, it means you overcommited your field and you were punished for it (you'll probably drive check one next turn anyways). And most importantly, if you're playing DoTe and you're committing everything to try and fish for your cross ride or persona blast, you're just being greedy. Everything aermo can potentially do for you is a luxury which isn't necessary if you're playing at your best.

Not using aermo has it's benefits as well! Remember our good buddy Conroe? He doesn't need to get aermo anymore! This opens up many new search options, such as a bahr to actually hit numbers with, or a perfect guard to keep yourself alive. No aermo also means that you don't have to worry about your rear guards hitting butt-ugly numbers like 15k on the side, and that you'll never use it's effect to discard a draw trigger and stupidly draw into another draw trigger (you'll feel even worse drawing a heal; it's not worth the extra 5k shields). If you're reliant on aermo to fix your gradestuck issues, try using Gojo instead. With gojo, you'll still be able to hit your magic numbers, and his cycling effect is guaranteed unlike aermo's where you must hit. The moment you misride at grade 2, your opponent will make sure that aermo will never hit again. 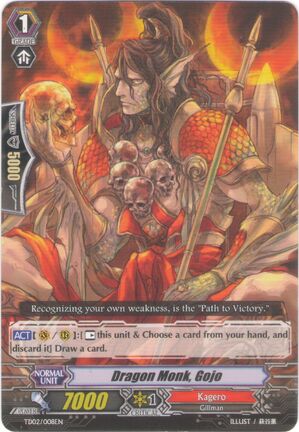 In conclusion, there are benefits to using aermo, but there are also many flaws behind using it as well. Aermo itself is a great card in certain situtations such as in the Goku deck, but that doesn't mean that playing it in every kagero deck is necessary. In fact, after I built DoTE right after the set5 release, aermo was the first card that i took out of the deck. Taking aermo out of your deck might feel a little strange at first, but try it! You may like it a lot more than you think.

Thanks for reading!
Philip Lai